Avalanches usually occur in the same places, time after time. This means that just by selecting the right terrain, it’s relatively simple to keep out of harm’s way. You can gauge the avalanche potential of a slope by assessing the slope angle and shape of the terrain.

A terrain trap is any feature which would increase the consequences of an avalanche. Examples include cliffs, gullies (where snow will pile up deeply), lakes, rivers, rocks and steep faces. Even a very small avalanche can prove deadly in combination with a terrain trap. Always think about the consequences of an avalanche as you travel through the mountains. Be constantly prepared to adjust your route to reduce your exposure.

If you have any doubt about the stability of the snow, choose terrain which has a low risk of avalanches. Low risk terrain includes: 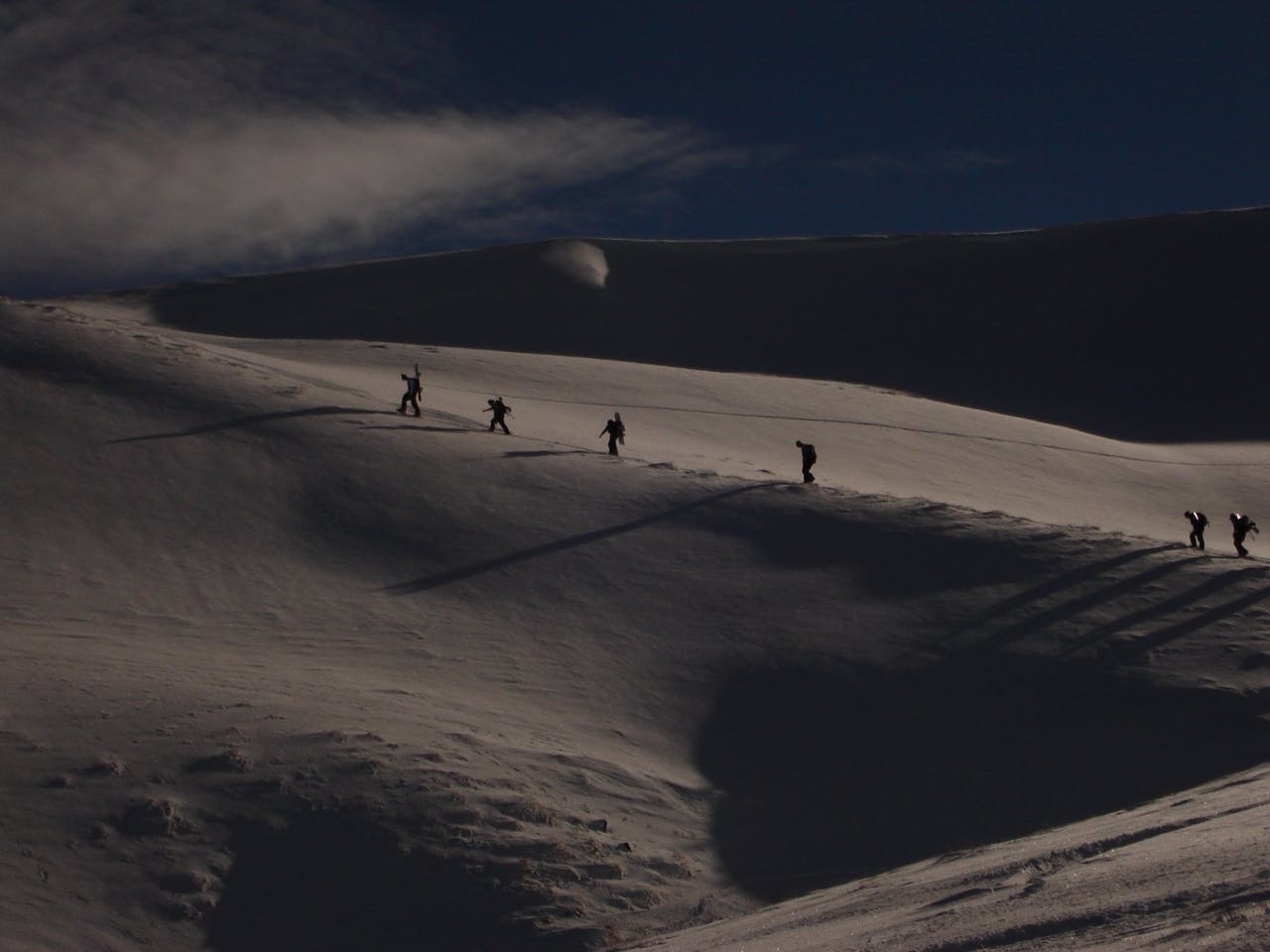 We often seek out the terrain where avalanches are most likely. Those avalanche-prone 30-45 degree slopes tend to be where the best skiing or riding is, and wind-loaded slopes may seem like attractive sheltered climbing and tramping options on windy days. As humans, our ‘wants’ (to get fresh powder, or to get out of the wind) can easily override our training and better judgement. Throw in some other compounding factors like a strong personality in the group, the desire to fit in, the rush to achieve something in a weekend, or the sense that nobody else is saying anything so they must think it’s OK, and it’s easy to see why accidents happen.

There are times when travelling in exposed avalanche terrain is appropriate, but not every day. The secret lies in curbing your urges and being rational in your decision-making. Choosing a route through terrain which is appropriate to the current avalanche danger will help you avoid being involved in an avalanche. When the avalanche danger is low, that might be the day to choose a steep or exposed route. When the danger is elevated, it makes sense to stick to low-risk terrain.

Many people are killed by traumatic injuries during avalanches, so there is no guarantee that rescue equipment will save your life. Avoidance is by far the best strategy. However, if you do get caught, try the following.

Yell out so your friends know to watch you
If using an airbag, deploy it
Do whatever you can to get out of the avalanche – grab, kick, swim
Create an air pocket in front of your face before the avalanche stops

The Big Three (transceiver, probe and shovel) should go with you every time you travel in the backcountry. Always travel with others. Everyone should be fully equipped, communicating and watching out for each other. Wear your transceiver snug to your body and away from any electronic devices, magnets or metals. Turn off any transmitting devices (e.g. Wi-Fi, cell phones, Bluetooth, GPS) as these interfere with the transceiver. If transmitting devices must be switched on, keep them separated from your transceiver by at least 50cm (try putting it in a low leg pocket). Your transceiver should have three antennae and a frequency of 457 kHz.

Your shovel should have a sturdy blade and be designed for avalanche rescue. Carry your shovel and probe inside your backpack.

In addition to the Big Three, these extra tools are recommended as they can increase your chances of survival in an avalanche.

How to extract your buddy from an avalanche 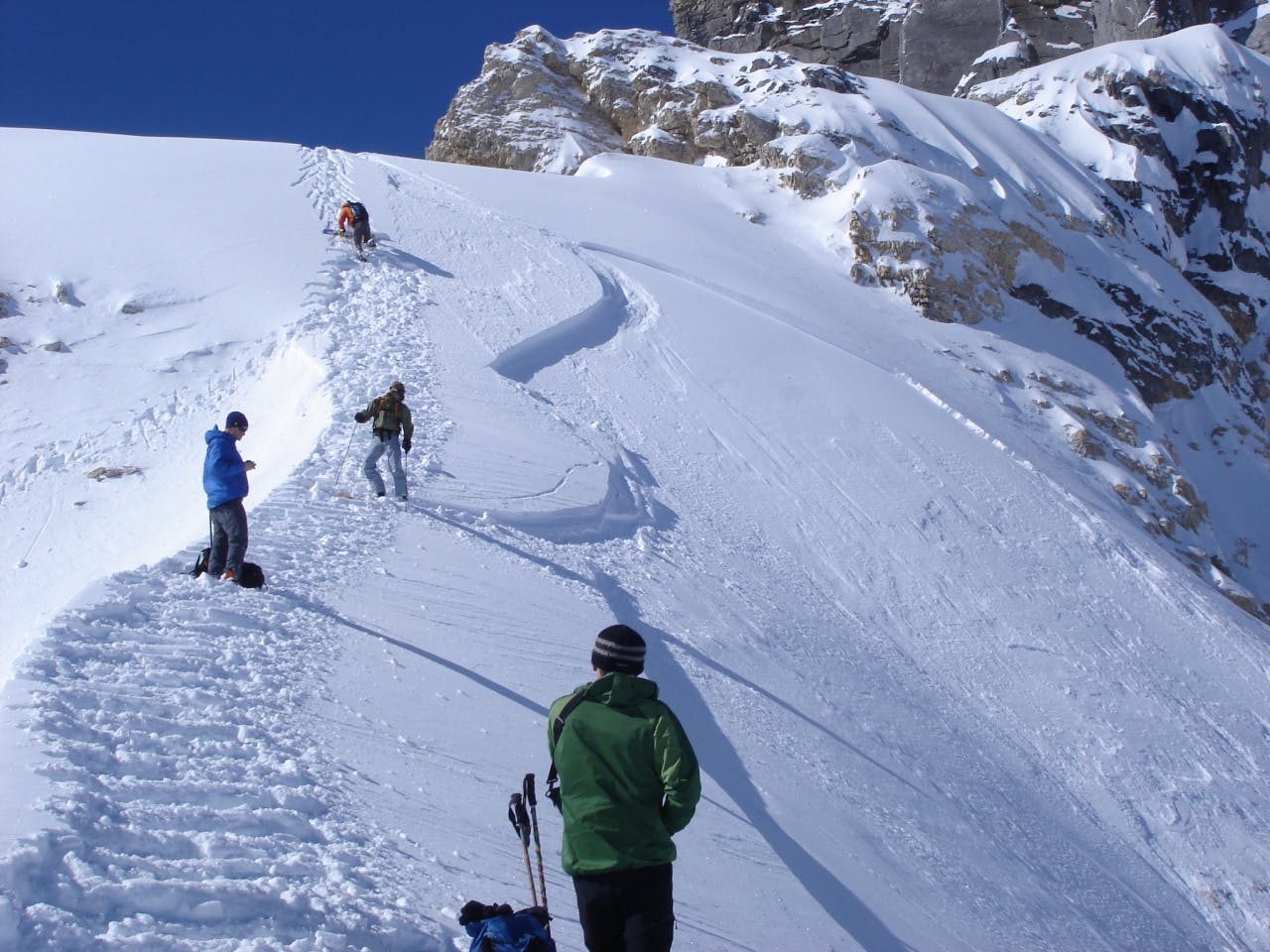 Backcountry skiers climb a safe ridge next to a slope which has just avalanched – if in doubt about the route, speak up

Here are a few basics on using the Big Three. These skills are best learned on an avalanche course.

Check everybody’s transceiver has good battery strength, is switched on and operates in send and search modes before you go into the backcountry.

In an avalanche rescue:

If it’s deemed safe, turn everyone’s transceiver to search mode Spread out to cover the search area downhill of the last seen point
Keep an eye out for surface clues (gloves, skis) and investigate these early by probing and pulling on them
Follow the lights and indicators on your transceiver towards the strongest signal
Once you get within a few metres, slow down and get down close to the snow
Pinpoint the buried person using a fine bracket search technique
If more than one person is buried, split up the rescuers to keep searching for others