Read more from the
September 2020 Issue

Read more from the
September 2020 Issue

For first-time tramper Rebekah White, the Routeburn Track proved to be the spark that ignited a love of the outdoors

I had never been tramping in my life when, one day, I decided to go and see some mountains. I was 24 and had my first real job and my first real disposable income and a vague idea that I liked the outdoors, even though I didn’t know it very well. I Googled all the Great Walks to see which one looked best in photos, and I wrote on Facebook: “I’m going to tramp the Routeburn. Anyone want to come?”

It was not a great proposition for any of my friends. I had zero outdoor skills. I was a giant nerd. I had never walked for a whole day. But an acquaintance replied – Lynda was in – and six months later, we were in a minivan bumping along a gravel road outside of Glenorchy.

I hoisted my pack in the track car park. The weight was funny – not quite balanced. Every step I took felt awkward.

Admittedly, my preparation had been overenthusiastic in some ways and stupid in others. I thought it was necessary to have a change of clothes for each day. I took an entire loaf of bread and an entire jar of peanut butter. I was smart enough to decant wine into a plastic bottle, but not smart enough to take whisky instead. All this stuff I chucked into my pack willy-nilly, effectively preventing me from finding anything I wanted.

But I quickly forgot about the lopsided weight. When you’re from Auckland, beech forest is astonishing. Tiny leaves floated down on me like confetti, turning gold when they passed through sunbeams. I caught glimpses of the Route Burn through the trees, a river the colour of a glacier heart. Where I’m from, rivers are brown.

We stopped so often to stare at things, immobilised by wonder, that it was a surprise to arrive at Falls Hut in the middle of the afternoon. I spent the rest of the daylight gazing down to the flats, the river a coil of silver winding through them. Looking was like eating or drinking, sating a hunger I didn’t know I had.

The next morning, the sky was lower, and as we climbed, the Route Burn became narrower, leaping from pool to pool. Wind ruffled the surface of a dark lake, turning it to beaten metal. My pack settled closer on my shoulders.

The drizzle started before we reached the top of the pass, and then became steady rain. I didn’t know if I should worry about the fact it was raining, so I worried extra to compensate. My running shoes squelched with every step. Cloud enclosed us. I had no idea where I was going or how long it would take to get there. I didn’t have a map. In the top pocket of my bag, the ink was running on my printout of the DOC track description.

Then the mist swept aside, and I saw forest below, coating the downward slopes like moss, and the shore of a lake, its shallows glowing turquoise as though lit from within. Rain dripped down the back of my neck, but I no longer cared.

The weather cleared to a fiercely bright morning. Walking out, we finally saw the Darrens, the object of my desire, but by now I was so drunk on marvellous views that I could barely register them. I was tired to my bones. I fell asleep on the bus to Te Anau.

After that, tramping in summer became a regular thing. The Routeburn had been expensive and difficult, but it had also opened a door of possibility. Now, I knew that I could challenge my body – not just my brain. In fact, I’d found something to do that didn’t require my brain at all. Tramping let me tune into sensation rather than thought.

Now, nine years later, I always pack whisky and maps. Lynda’s one of my best friends. I wear the same clothes for a week at a time. And at any moment, I can look down in my memory to Lake Mackenzie glowing in the rain, the clouds parting for a moment to show me where I’m going.

– Rebekah White is the editor of New Zealand Geographic 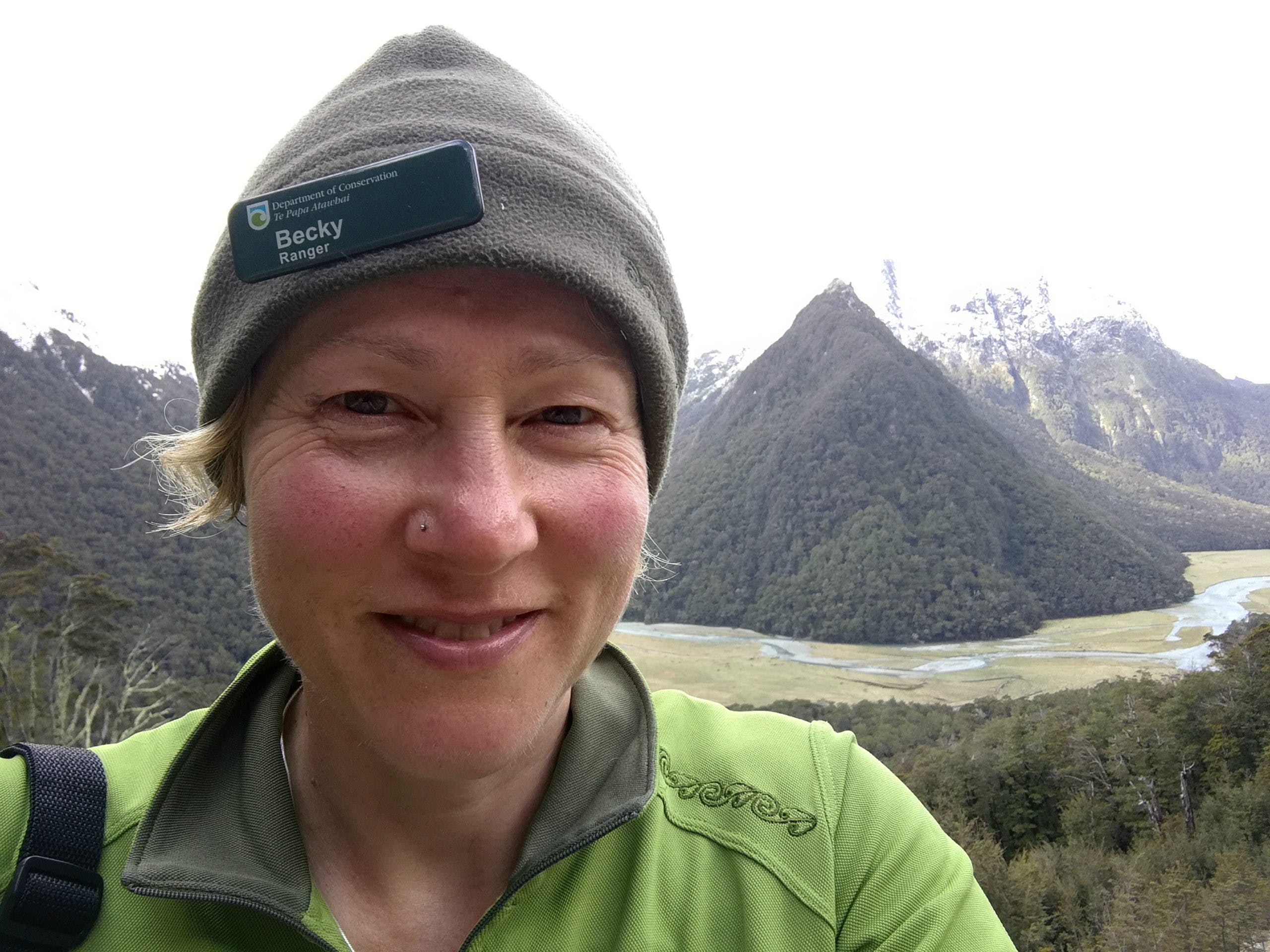 Best wildlife encounter: The amazing thing about being stationed in Mt Aspiring National Park is seeing the native birds every day and watching them through the season. I loved watching the whio with their ducklings grow, anxiously counting the number of ducklings each time I come across a family. Oh, and I got to see native bats for the first time!

What’s something you recommend walkers do: Take the time to be still and quiet in the forest, listening and looking for birds – it’s not just about the destination. Explore the North Branch of the Route Burn; it’s a beautiful and peaceful valley. Even going a short way out onto the Flats gives you 360-degree views of the surrounding peaks.

What’s in tramper’s packs? I’m always inspired when people bring something creative – a sketch pad to do some drawing, a penknife to whittle a boat to float down the stream. The biggest gear mistake people make is not having a waterproof pack liner. There’s nothing worse than a soggy sleeping bag.

Best time to walk the Routeburn: Early summer would be my pick – November or December – because that’s when the alpine plants flower. Embrace whatever weather conditions you experience – a mild sunny day is easier, but a stormy one can be exhilarating and you’ll really feel like you’re out in the mountains.

Most memorable day as a warden: I was in the hut during the Southland floods in February. The volume of rain was incredible and the Route Burn grew from a pretty stream to a raging torrent – the whole valley became a swollen grey river. I was stuck at the hut with eight others. One of the trampers was a chef and she gathered up food from everyone and cooked the most delicious meal from a random set of ingredients. I felt fortunate to experience the wild weather from the safety of a warm hut, and be in such cheerful company as we awaited evacuation.

Just got a weekend? Spend a night camping in the Valley of Trolls, a side track from Lake Harris.

Where to stay: Glenorchy and Paradise have several accommodation options.

Where to stock up: There are plenty of outdoor retailers in Queenstown. Mrs Woolly’s General Store in Glenorchy supplies food.

Walking the Routeburn Track
The Routeburn has something for everyone, and all in just 32km.

The track sets out on a gradual undulating climb through lush beech forest, following the window-clear Routeburn River until it reaches the dramatic flats, flanked on both side by the Humboldt Mountains. Keep one eye on the river for whio, and another above for yellowhead, titipounamu, robin and kākā. Once passed the Flats Hut, the track climbs steadily through thriving beech to the Routeburn Falls Hut, situated beneath the stunning falls, and with million dollar views over the valley.

The track continues up the Route Burn Left Branch, climbing to Lake Harris. A steep ascent brings the track high above the turquoise lake, where it sidles past it and on to Harris Saddle and shelter – a decent spot for lunch and for views across the Hollyford River to the Darren Mountains. The track crosses from Otago to Southland here, and the descent begins – first above the treeline, and then into rich beech forest before dropping finally to Lake Mackenzie Hut.

Lake Mackenzie Hut to The Divide
12km, 4-5.5hr
The final day – though the greatest distance – is largely downhill. From the hut, cross a small flat, and descend an open grassy area known as ‘the orchard’ to Earland Falls – an impressive 174m waterfall. Mind your feet in the splash zone, as the rocks are slippery. Continue the final leg past Lake Howden to The Divide. If you still have the energy, it’s well worth taking a 1.5hr detour to Key Summit.