It was late. Or maybe it was early morning. His alarm was set for 3am. The aspiring alpinist and adventure photographer needed to rest. But his mind was racing.

“My brain just wasn’t turning off,” says Guille. “I spent the entire night not sleeping – and you start worrying. Everything starts running through your mind.”

En route to the summit of Mt Kehu (2220m) in Nelson Lakes National Park, Guille and his climbing partner Brandon Kay ran out of time. They got stuck on the descent and had to change course, scrambling down the wrong side of the mountain.

On The Footstool (2764m) in Aoraki/Mt Cook National Park, precarious crevasses and a five-metre wide bergschrund at the head of the glacier forced Guille to retreat.

And on an attempted ascent of Mt Aspiring over Easter weekend in 2016, the pair were caught in a ferocious storm and were lucky to walk out alive.

So, in a bunk bed at the New Zealand Alpine Club’s Arthur’s Pass Lodge last September, Guille was thinking about all the things that could potentially go wrong on his next climbing trip – a planned ascent of Rome Ridge to the low peak of Mt Rolleston.

What’s the weather going to do? How tough is the climb? What if we fall?

Rome Ridge was on Guille’s list of must-do climbs.

“It’s a real New Zealand classic,” he says. “Every mountaineer will do Rome Ridge when they’re becoming an alpinist. It’s one of the most popular climbs. It’s very elegant, it’s very steep in places. You wouldn’t want to fall off it anywhere.”

Guille, based in Nelson, had been on a two-week photography trip around the South Island. The weekend weather forecast looked good for climbing and he’d arranged to meet Kay, also of Nelson, in Arthur’s Pass on a Friday evening.

When the alarm went off on Saturday morning, Guille and Kay got up and cooked a big breakfast of bacon, eggs, baked beans and toast washed down with a couple of strong coffees.

“I was stressed because this would be one of the bigger climbs I’ve done to date,” Guille says, “and I’m doing it having not been asleep for a day and half.” 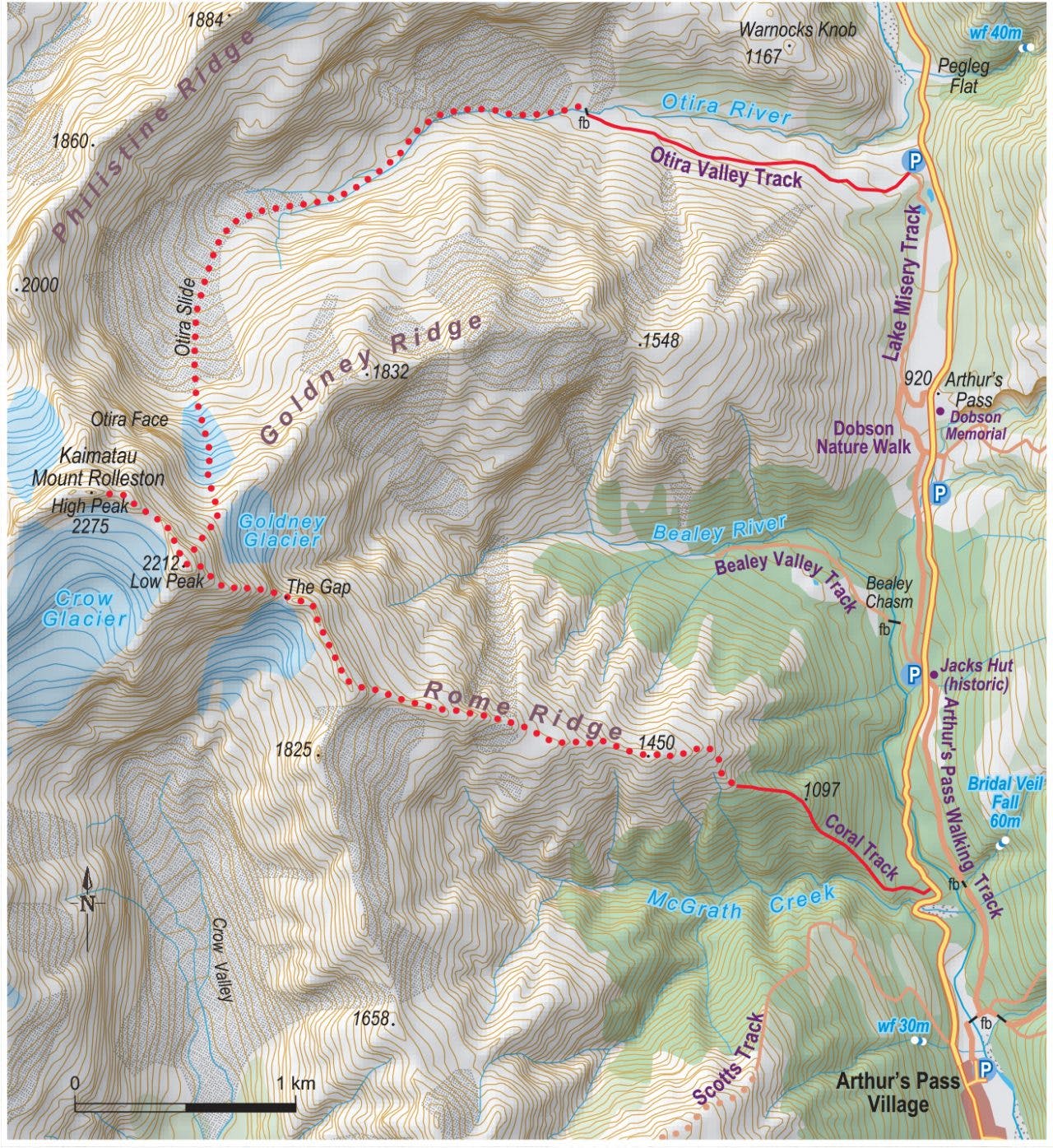 Map of the route to Rolleston’s high peak. Map by NewTopo

They drove to the trailhead, a route known as Coral Track, about a kilometre north of Arthur’s Pass Village.

The pair used headlamps as they made their way along the steep track and up to the treeline at about 1200m.

About two hours in, they left the forest and passed through the clouds. Beneath them was a carpet of white and above, a blanket of stars in the pre-dawn sky.

“That’s really special,” Guille says. “Up there, just the two of you, nobody else is awake yet.”

They hit snow about 30 minutes from the treeline and fitted crampons as the sun started to rise.

The mountains became more defined, the stars disappeared and the sun cast a rosy hue across the sky.

The snow was now frozen solid, so Guille and Kay climbed ‘French style’ using their crampons and ice axes to bite into the ice.

“It was a really nice freeze,” Guille says of the conditions. “We were a bit worried about it not being cold enough.

“At some parts our ice axes were thrashing in not much. We were just careful not to be on top of each other so if one of us did slip and fall we wouldn’t knock the other off.” 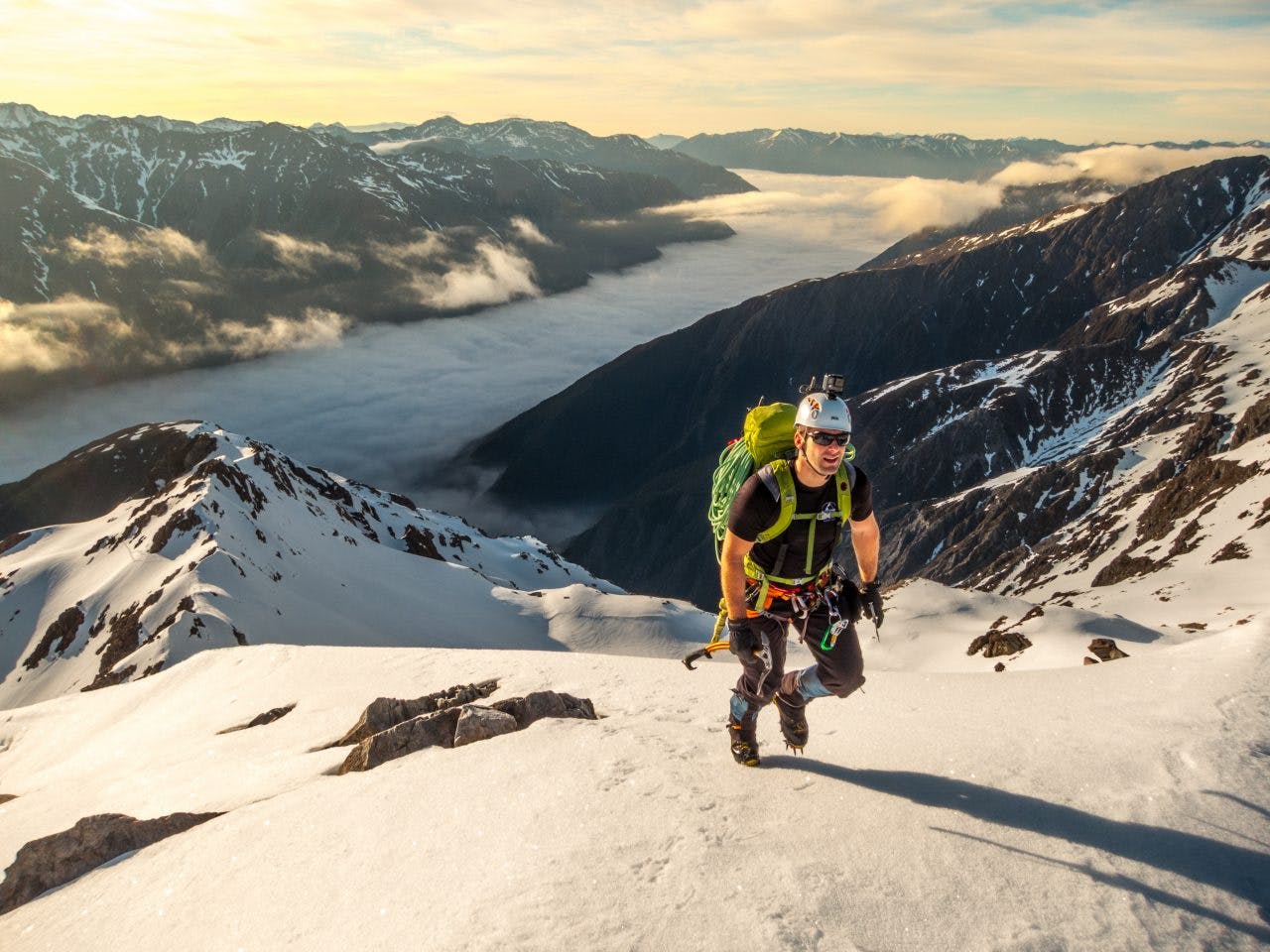 They were headed for a point, located at about 1450m, where some climbers choose to sidle beneath bluffs.

However, Guille and Kay decided to walk up a snow gully and over two buttresses before climbing along a gentler part of the ridge. The pair were wary of cornices and used landmarks to guide them through the snow.

The next challenge was a section known as The Gap, often considered the crux of the Rome Ridge route.

Guille said a lot of people opt to sidle east below the gap, but because the snow was firm he and Kay decided to go directly up and over it.

“It’s after The Gap where it gets steeper – that’s typically where people start pitching,” Guille says.

Guille and Kay were wearing harnesses and carrying a 70m rope, but both decided that given the near-perfect conditions, they would continue free-climbing.

It wasn’t a decision made lightly. Climbers have died on this route, most recently in January 2016 when Auckland-based Hungarian Gergo Verhas slipped and fell 50m on loose scree while descending via the Otira Face. It was also the scene of one of New Zealand’s worst mountain tragedies in 1966 when four climbers perished and an avalanche killed one of the searchers.

However, Guille says: “We felt pretty comfortable in the conditions. Other people have free-climbed the mountain as well.” 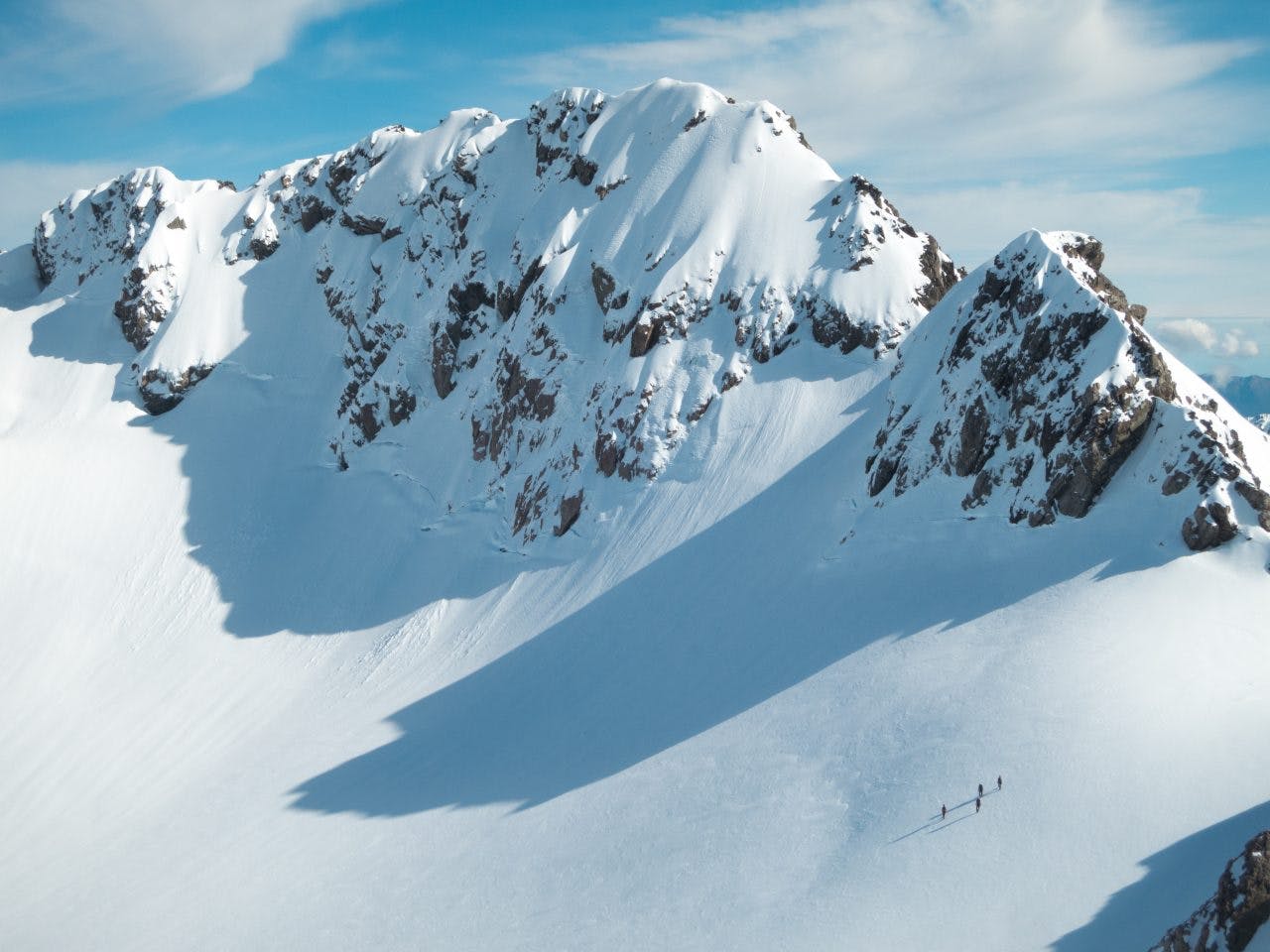 So they continued, free climbing on all fours – crampons and ice axes – towards the peak and walking through spongy snow on the north-west face for about 200m before returning to Rome Ridge.

Not long after The Gap, as the sun got higher in the sky, the inversion layer below started to swirl up the valley. It surrounded the climbers on the edge of the mountain, enveloping them in white.

“It felt like being in mid air,” Guille says. “Eventually, the cloud went up, over us and disappeared.”

“Getting onto the summit just felt amazing,” Guille says. “We could see Aoraki/Mt Cook to the South, we could see the West Coast, East Coast. We could see Lake Brunner. We could see all the mountains to the north of us.”

Because they had free-climbed the entire way, Guille and Kay only took six hours to reach the low peak, arriving at about 10am.

They knew that it was possible to climb to the high peak (2275m) for a “really big day out”. While snacking and taking photographs on the low peak, a group of four climbers from Christchurch, who had ascended the Otira Face, arrived.

They were en route to the high peak and with clear conditions and plenty of daylight left, Guille and Kay decided to do the same.

Leaving their food and wet weather gear on the low peak, Guille and Kay set off again. The route continues roughly north-west to middle peak before dropping off the ridge onto the top of Crow Glacier.

In late summer there are often crevasses between the glacier and the ridgeline face to high peak, but in winter they are filled in.

Again, the pair declined to rope up. “We’d seen the other four guys walk over there without falling in. They’d left a nice set of tracks.”

The other group had also cut steps in the ice and, Guille says, it was “like going up a ladder” on the northern shoulder.

Kay says it was a four-point zig-zag around, through and over rocks and a “knife-thin” ridge to the true summit of Mt Rolleston. It took about an hour from low peak to the summit, Guille says.

By this time, cloud was starting to roll in, so they didn’t stay long before starting the journey back down. 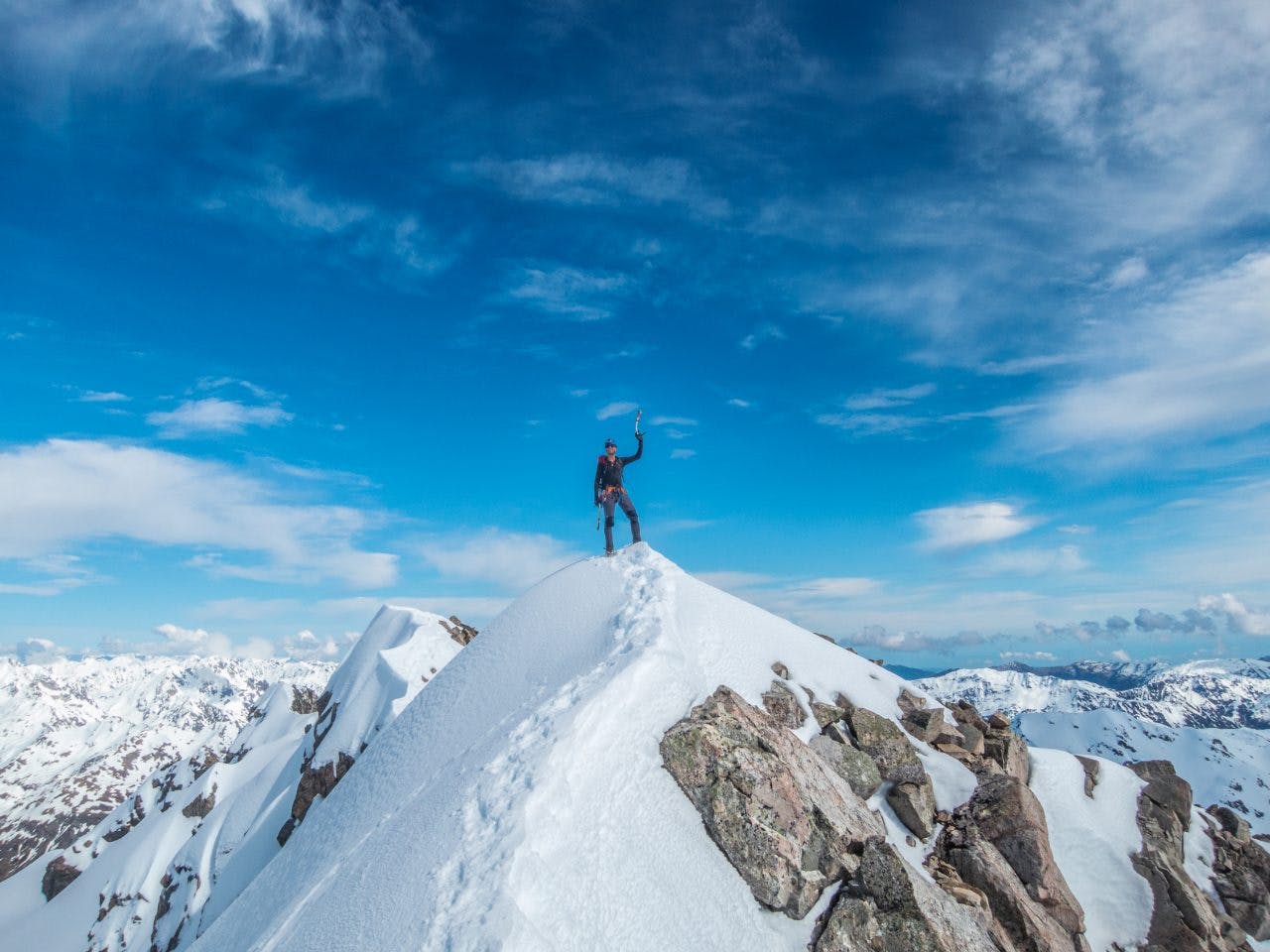 For the first time on the trip, the rope came out. They found a good rock to throw a sling over and abseiled the steepest part of the route, back down to Crow Glacier.

They collected their gear from the low peak and opted to descend via the Otira Slide, the most-used and fastest way off the mountain.

Guille says from the low peak looking north, there’s a prominent rocky outcrop which peters out to a ridgeline. That’s the direction down. From there, they used a more primitive method to descend.

“I think it’s pretty much 1000m downcthat face (Otira Slide). We managed to bum slide the entire way off the mountain. It was a good, long way.”

From the bottom of the Otira Slide, they walked down the valley on the true left of the Otira River, picking up a marked trail to the car park.

By 3pm, 12 hours after their alarms had gone off, they were at the Wobbly Kea pub in Arthur’s Pass.

“We had a few beers and then went back to the Alpine Club lodge for a good feed.”

Guille says after experiencing three frustrating climbs within a year, it was an incredible feeling to complete one successfully.

“The nervousness, the apprehension, the potential danger of mountaineering doesn’t add up sometimes,” he says. “If you have a bad climb, you’ve just been beaten to pieces, close to losing your life and it’s just not worth it. But when it all goes right it’s the most fantastic, incredible feeling.

“The feeling we had is why people climb – the euphoria, the joy.”

That night, Guille had no trouble getting to sleep. Exhausted from a full day of climbing and full with beer and food, he was out to it by 8pm.