“Hmm, busy place,” I remarked to Nina as three four-wheel drives barrelled by and a helicopter cruised overhead.

We were parked overlooking the Cascade River contemplating the proportions of our packs resting against the car.

“Busier than last time, that’s for sure,” Nina replied.

We still had vivid memories of our previous visit to the Cascade River a few years ago. We’d battled our way down the valley from Simonin Pass, accompanied by several fronts, more thunder and lightning than I’d ever experienced, and rainfall that was sufficient to take out the Wanganui Road bridge further up the coast.

Now we were returning to the Cascade, curious to experience the valley under more benevolent conditions and take in some of the surrounding tops. The Olivine and Red Hills area has long held a fascination for us.

The plan was to head up valley, climb onto the Red Hills Range before Cascade Gorge,  moving on to the intriguing Red Mountain, then hop across the Cascade Valley to the Olivine Range and traverse north back to the road end. All well and good on paper, but those pesky things such as height gain, bush, rivers, not to mention the weather, have a habit of getting in the way of one’s plans in this part of the country.

A short track took us through the stunted bush growing on glacial ultramafic outwash to the clear, placid Cascade River at The Bend, a mere 40m above sea level. The track is all that remains of explorer Charlie Douglas’ benched track which in the late 19th century forded the river and followed its western bank, before crossing a low saddle into the Gorge River.

Over those first few days, with the bustle encountered at the road-end well and truly behind us, we wound our way up the charming lower Cascade, sometimes crashing through thick lowland bush, at times boulder hopping along the river margins. A small gorge just after Woodhen Creek presented the only real difficulty. 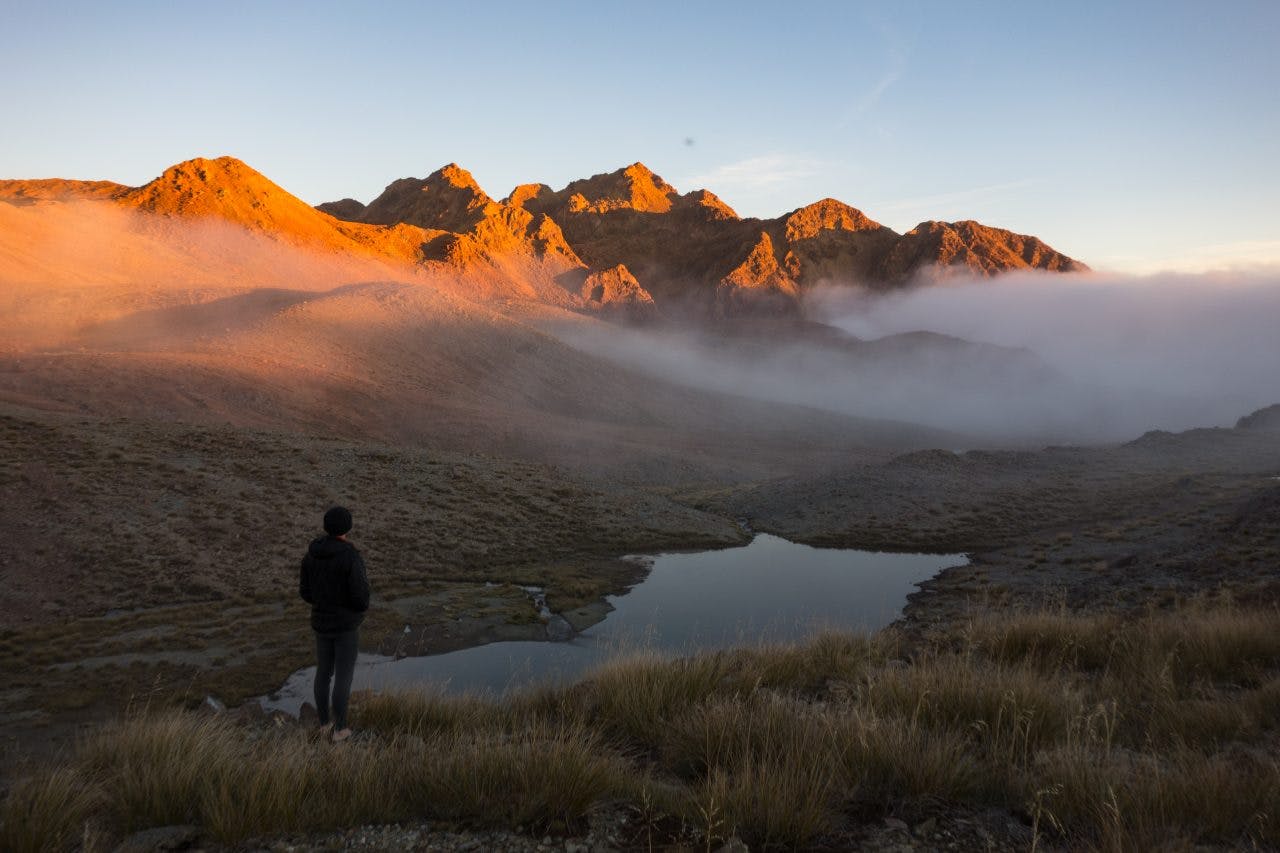 Before the valley closes in at the Cascade Gorge, we climbed a steep and narrow spur out of the valley to the picturesque savannah-like landscape just below the bushline near the northern end of the Red Hills Range. We set up camp for the evening and, with a mug of tea in hand, sat back and watched our dinner slowly simmer away over the fire. The riotous antics of several kea provided the evening’s entertainment.

Shuffling back from the heat of the fire, my thoughts turned to a previous trip that had seen our tent almost buried beneath snow one stormy winter’s night, not far from this very spot. This time barely a breeze was present and we awoke to a heavy dew on the tent and crystal-clear skies.

Breaking through the last of the bush in the crisp morning air, we struck out along the rolling tussock tops towards Red Mountain. Commanding views stretched across the  beech-covered hills of the Gorge River catchment, and further out to the Tasman Sea. To the east, across the deep, boiling Cascade Gorge, the Olivine Range reared into the sky, the vertical strata culminating in the rugged crenulations of the ridge crest.

By day’s end, we had reached Peridot Stream, the heart of the Red Hills’ fascinating ultramafic country. The striking red appearance here is produced by high levels of oxidised iron, a feature that becomes evident as the sun settles over the Tasman Sea and Red Mountain took on a fiery glow.

Tumbling out of the tent at first light, we made our way across wild, erratic boulders to the summit of Red Mountain. The view revealed a landscape crisscrossed with memories. To the south, we peered to Stag Pass and Kea Spur which we had traversed on one stiflingly hot summer’s day a couple of years ago. Towards the Limbo Valley and the central Olivines, the multiple rock towers of Temple Peak were just visible above Hurricane Col, a peak we had gained under stormy skies on my first big trip to the range several years ago.

Back at camp, cloud was rolling in from the Tasman, cutting visibility to a few metres and reducing the sun’s warming rays to an insipid greyish glow. A cup or two of tea later and our strength was rekindled for the descent back into the Cascade. Due to the ultramafic rock, the bushline here is 400m lower than that on the eastern side of the Cascade, and what bush there is, is a scrubby mixture consisting of the likes of olearia, dracophyllum and bog pine.

An easy, relatively scrub-free line took us to the delightful flats near Durwoods Falls at the top of Cascade Gorge. It had been a long day, and with the tent pitched, darkness rapidly settled in. A roaring fire kept us warm and comfortable even as the surrounding flats quickly developed a frost. Over dinner, the musical drone of the river was punctuated now and then by the eerie call of a morepork. 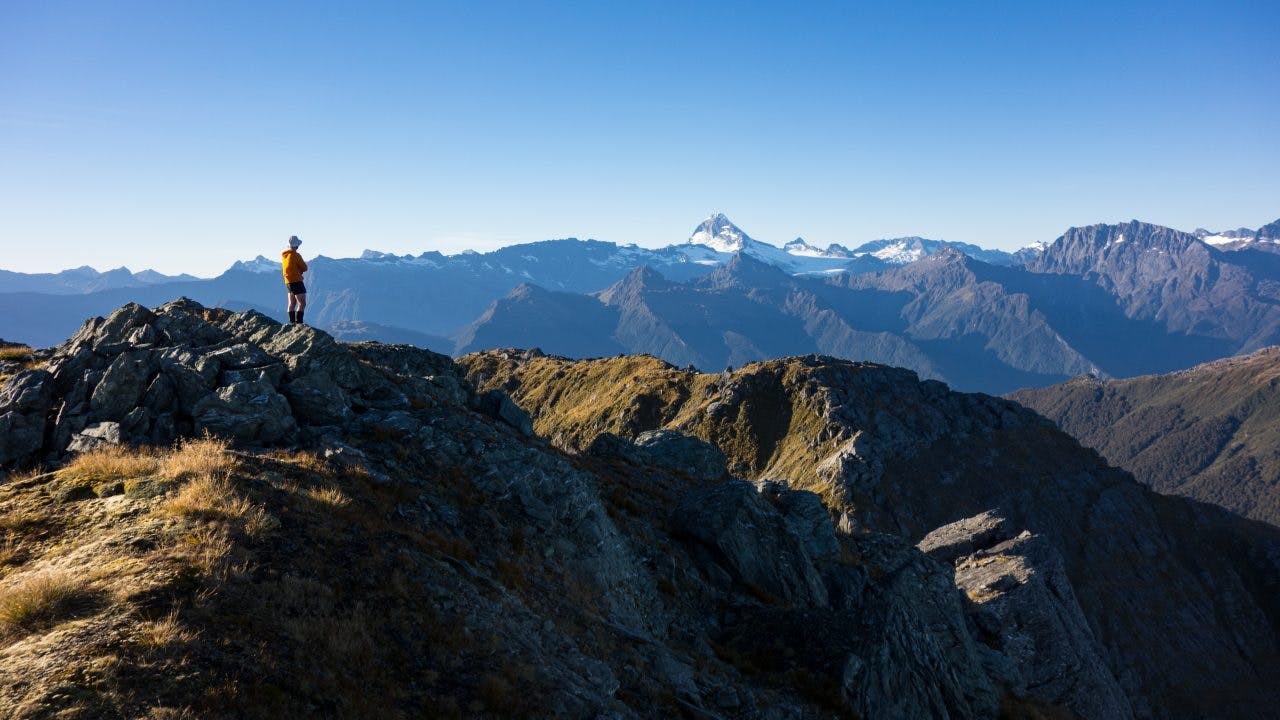 Moir’s Guide North uses some rather intriguing language for Captains Creek – our chosen route onto the Olivine Range. It describes the last 300m to the bushline as ‘particularly trying’. Drizzle gradually set in as we quickly dispatched the first 300m. Then, just as described, we encountered a maze of house-sized boulders covered in dripping, thick West Coast bush. It took four hours to navigate the remaining distance.

We eventually staggered onto the lip of the hanging valley and after a search for a dry spot, much of the surrounding area being slightly boggy, settled down for the night on a small glade among stands of stunted bonsai beech, another fire roaring.

The next morning we cruised up Captains Creek and over a shoulder into the headwaters of Falls Creek, where we spent time watching three whio practise their whitewater skills.

Curiously, Falls Creek has a large rib of glacially-rounded schist some 100m high, like some giant serpent has come to rest on the valley floor. It effectively partitions the upper valley into two separate catchments. Our reward for slogging to a camp on the range crest just north of Joe Peak were views of Mt Aspiring/Tititea across the vast Arawhata Valley.

We were now on the Olivine Range and ready to continue our traverse north. A few early morning antics and false starts eventually had us descending steep snowgrass into the headwaters of the true right branch of Falls Creek. As we concentrated on the descent, thick cloud snuck up on us and steady drizzle made the much-anticipated section of knife-edge ridge ahead look rather daunting. We scouted a possible gully system which, with a few moves here and there, led us onto the ridge crest beyond a deep notch which looked to be the crux. We regained the ridge via this route and enjoyed lunch and a cuppa on this lonely stretch of ridgeline as mist swirled about us.

On the far side of Bald Mountain, hands-in-pockets country took us all the way to Tararua Peak. We ambled off the col to the south of the peak to superb camping in a cosy basin.

Sitting on Tararua Peak the following morning, we scouted the route ahead. It looked easy going and beautiful tops all the way to Staircase Mountain. With no sign of the weather deteroriating, we decided to continue the traverse along the Thomson Range through to lakes Leeb and Clarke rather than exit down Martyr Spur.

From Staircase Mountain north, the range is surprisingly rugged. But with the decision made, we motored into the upper Martyr and across the swampy flats at the confluence of the two main branches.

The deer population is thriving in the Martyr, with animal trails that would, with the odd bit of permolat, be ready-made tracks. We popped out of the deer highway at the flats in the upper basin below Collyer and Dagon to be confronted by a large stag. It stood there, staring at us for a long time.

We climbed to a saddle between Dagon and Collyer and gained the Thomson Range. Heavy drizzle set in, raising doubts about our ability to navigate the tops. We concluded that the narrow ridge to Lake Leeb would be a better bet than retracing our steps and exiting via the rolling, ill-defined tops around Martyr Hill.

After some serious map and compass work, we made it through the saddle and down to the ridge crest running north to Mt Lindsay. Moirs does warn that ‘things are pretty rugged here’, with massive schist blocks making navigation all the more interesting.

We weaved our way north along the tops, arriving at the point where we were to drop to the bushline. A flat bit of ground with a nearby tarn provided the perfect spot for our tent.

That evening, we heard the rare Haast tokoeka/kiwi calling. There are just 400 or so of these mountain-dwelling birds in the wild.

We finished our trip with an easy traverse along the narrow bushy tops between Turney and Thomson Stream to lakes Leeb and Clarke.

It felt positively summery as we lazed in the sun at the northern shore of Lake Clarke, marvelling once again at another great perspective of Aspiring, thrust against the sky above the head of the lake. With little left to do but crash down Carl Creek back to the road, we had time to relax and reflect on what had been a great trip through a fantastically wild bit of country.

More photos from this trip…. 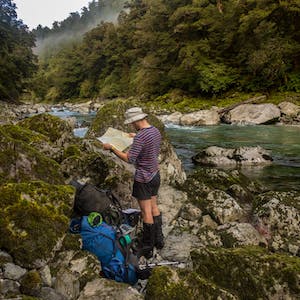 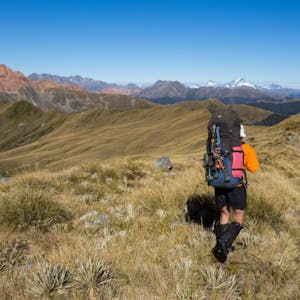 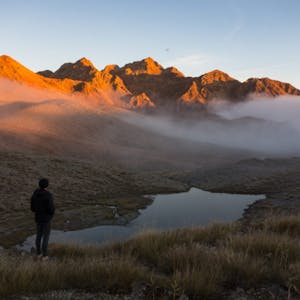 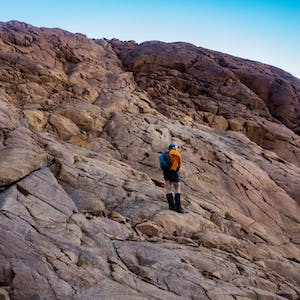 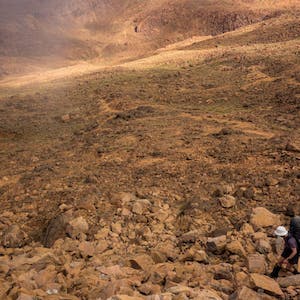 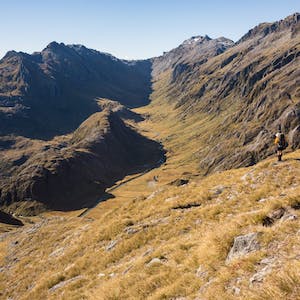 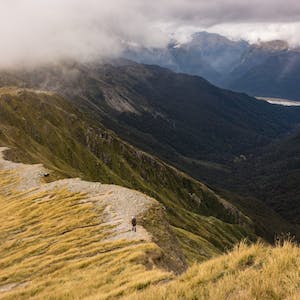 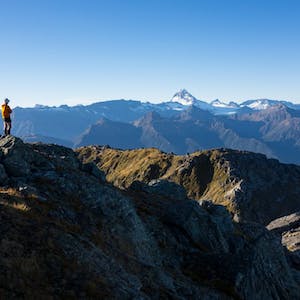