Distance
35km one way. Extend by a return ride, or biking seal and gravel from Raetihi

Compared to the hardships endured by the returned servicemen who attempted to tame the remote and rugged country in what is now Whanganui National Park, mountain biking the track that once connected their farms to civilization was no doubt a doddle.

I was, however, a little apprehensive about the Bridge to Nowhere Track after getting one report of pushing bikes uphill through mud for hours; and hearing it called a hell ride by some ‘hard outs’ who rode the return trip.

On the positive side, I’d recently read in Wilderness about the track being as one of the best mountain bike rides in the North Island. Transport to the start of the track a jet boat ride out at the end allayed my concerns about it being overly difficult. The track had also undergone a major upgrading as part of the National Cycleway Project. All seemed good enough reasons to invite 10 friends to join me for an energetic birthday.

On a crisp cloudless autumn morning Ken from Whanganui River Adventures unloaded us at the Ruatiti Road end, a slow scenic hour or so from Raetihi. He and his jet boat would be at the Mangapurua Landing on the Whanganui River at 2.30pm – giving us a comfortable four to five hours to complete the 35km.

A pretty poplar-fringed track led over farmland, winding on up and around hillsides for about an hour. My partner’s GPS told us we’d increased elevation from 320m to 600m over the first 5km hard, but not punishing, slog. It might not be such fun in pouring rain or after a few wet days turn the ground to glue. We stopped to admire Mt Ruapehu’s fresh dusting of snow and from the highest point gazed out over layers of hinterland. Mt Ngauruhoe was clearly visible on one horizon, Taranaki on the opposite.

Open country gave way to bush as we cruised a big curving downhill into the Mangapurua Valley. The history of the area revealed itself with graphic evidence of the abandoned settlements of First World War returned servicemen. The last few gave up the struggle to farm in the early 1940s when the government decided that road access could no longer be maintained. The steel and reinforced concrete bridge opened in 1936 become redundant – the Bridge to Nowhere. 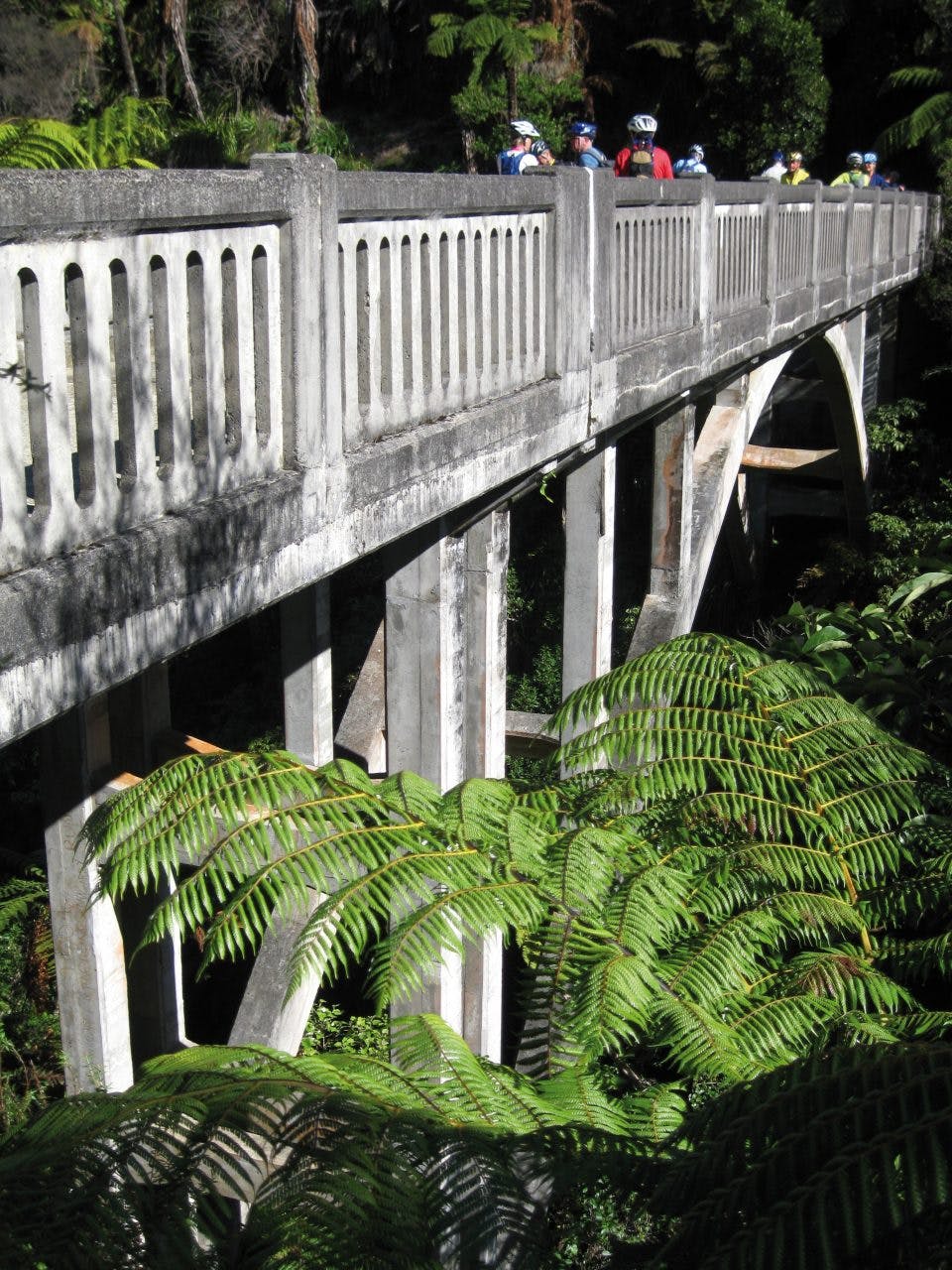 Wooden signs with family names mark the sites where the servicemen once cleared land and tried to make a living. The many macrocarpa and pine shelter belts and a shady avenue of chestnuts that we rode under were planted by the determinedly optimistic settlers. One particularly poignant sign recorded that ‘McDonald’ was the last to leave.

On the way through the valley we started encountering what would be more than 20 bridges over side streams, creeks and small gullies. Most of them were swingbridges just wide enough for handlebars. Some of us simply squeezed across pushing our bikes, others found upending them more efficient.

One of our group slid sideways while attempted to ride along the edge of one of the biggest puddles in the track and ended up completely soaked in knee deep water. Lunch in a sunny clearing soon dried her out. The odd mechanical issue proved that carrying an extra link and some tools is a good idea. None of the falls necessitated first aid but we were glad we’d carried a kit. It’s a long way out for help.

Towards the end of the ride, about 8km from the bridge, the river snakes down a deep gully and the track narrows dramatically to navigate a series of bluffs via a fairly precarious ledge high above the water. While we did disregard some of the signs suggesting cyclists dismount and walk, recent slips in the crumbly papa cliffs and the width (or lack of it) of the track made parts almost impossible to ride and the consequences of falling not worth the risk.

Signage also let us know when it was safe to remount, signaling sections of mildly challenging single track for a blast between bluffs.

Suddenly we popped out at what is a remarkably solid and well-preserved structure for a bridge in the middle of nowhere. The last couple of kilometres from the bridge to Mangapurua Landing on the Whanganui River is a well-walked track, fun to ride.

Ken was docking as we arrived and loaded the bikes while we downed welcome beers. Ripping down the river under jet power was far more fun than the idea of the return bike ride. Rain earlier in the week meant the water level was up and ‘upside down’ – very murky – which did not detract from the primeval atmosphere and the far away feeling that the Whanganui River always engenders.

At Pipiriki bikes went from boat to trailer again so Ken could deliver us back to Raetihi at the end of what our fit, but not young, group with varying riding skills unanimously agreed was a fantastic day out, enhanced dramatically by perfect conditions.