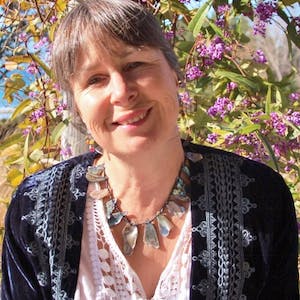 After 35 years without lacing up her boots, Rebecca Hayter discovers that by taking baby steps, she has learned to love the hills again

I STOOD ON the deck of Fenella Hut in Kahurangi National Park, sipped my tea sweetened with condensed milk from my brand new Kathmandu cup and contemplated two important facts.

One, that putting condensed milk in a toothpaste tube is sheer brilliance, albeit ironic in a dental sort of way and, two, that to be here on my own near the place where the mountains live in the sky felt like a spiritual detox.

I didn’t mean to stay away for so long. In my childhood, tramping had been the norm. I used to complain every time my parents announced another tramp until, when I was aged about 10, I suddenly got it: the sheer aliveness of bush, birds and billy tea, the sweet ache of success when we reached the hut.

But when my sister and I went to boarding school, the family structure changed. I moved to city life and got into sailing. With rare exceptions, I hardly ever slept in a tent. Somehow, 35 years slipped away.

There was a group of tramping friends on my periphery in Auckland but I didn’t ask to join them, aware I had lost my tramping fitness. Then, one of the leaders, an undercover cop, was shot dead in a drug sting. I’d known him since I was 16.

I checked my pack, tightened my boot laces,

loosened one slightly… oh for God’s sake, just get on with it

When someone I love dies, I look for what I’ve learned from having them in my life. The answer came during a meditation: “Go to the mountains.” I decided to go alone. That way, my fitness wouldn’t matter and it would be easy to organise.

I picked an easy tramp I already knew: Fenella Hut in the Cobb Valley, near my home town of Takaka. My sense of direction isn’t great but even I couldn’t get lost on the trail from Trilobite Hut at the top of the Cobb Reservoir, past Chaffey Hut and up the valley to Fenella Hut: five hours, max. 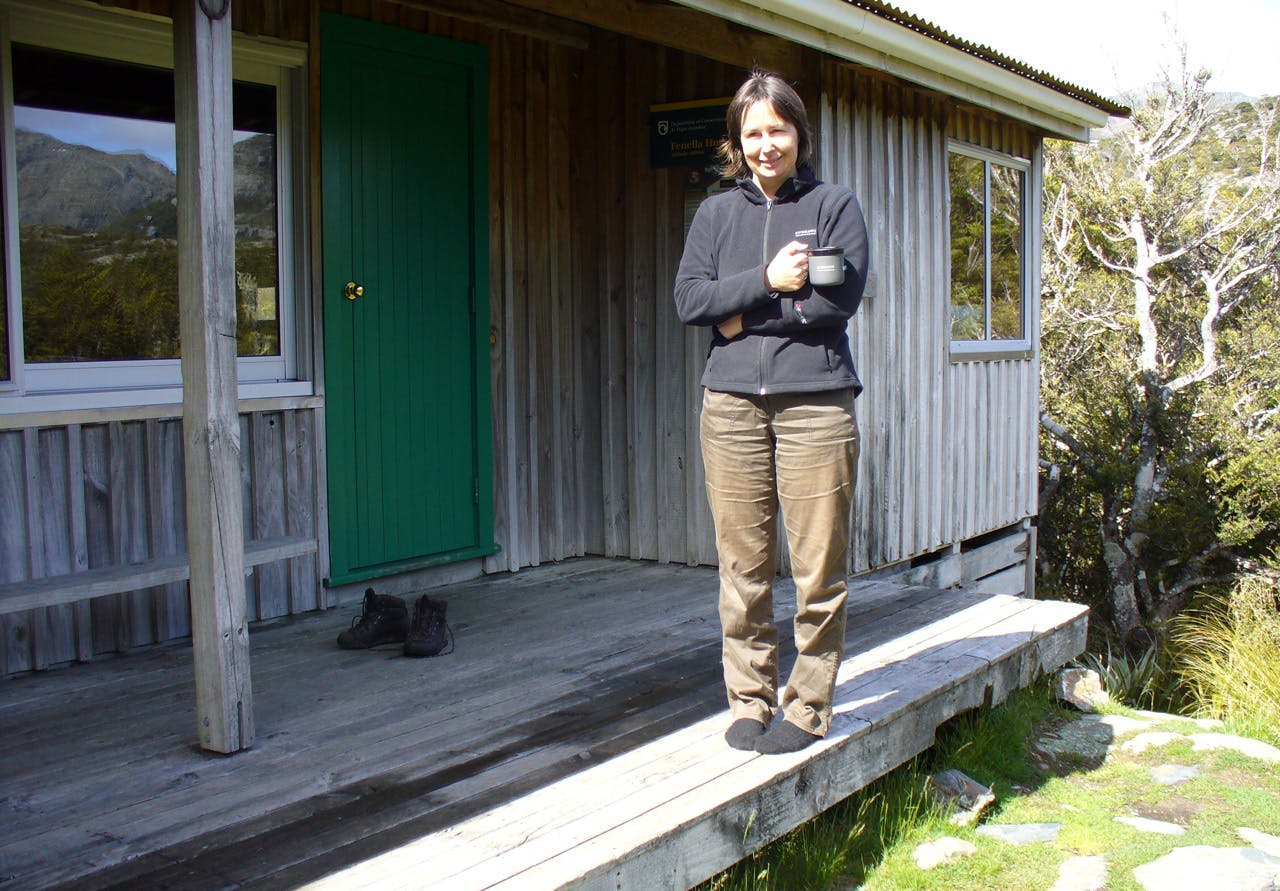 I bought my kit: a pack, boots, billy, wet weather jacket. I was a walking-talking ad for Kathmandu. But oh, how I stressed. Many years ago we’d been trapped at Chaffey Hut by flooded creeks, and now I obsessed about what I would do if faced with a swollen creek. How would I know if it was safe to cross or whether I should sit tight and wait it out?

With that conundrum unresolved, I booked my air ticket from Auckland to Nelson, hired a car and drove nervously up the narrow mountain road, dodging its occasional rock falls. It never used to bother me; now I was disappointed that it did.

At Trilobite Hut, I checked my pack, tightened my boot laces, loosened one slightly… oh for God’s sake, just get on with it. I set off. It was mid-December, perfect weather and I had plenty of daylight.

I walked past the trout pool and through patches of beech forest into the sudden open views of the river winding down the valley. I struggled to remember the names of plants. I saw bellbirds and fantails. Every time I stopped, a robin arrived on its matchstick legs.

Chaffeys Hut had deteriorated; tired by the years. The tent shelter was barely there (both have since been renovated). Well, I’d aged too, but it was sad to see structures I’d taken for granted heading for oblivion. But as I progressed up the valley, I realised the good people at DOC had rerouted the track up the side of the valley instead of crossing the river, and every creek had a solid, safe bridge. I’d worried about nothing.

Even better, I wasn’t freaked out by travelling solo in the bush – not bad for someone who used to be scared of the dark.

On final approach to Cobb Hut, the bush opens into alpine forest, the track leads from cairn to cairn up a rocky outcrop decorated with silver and black lichen. There is a vertical fall to a narrow, deep gorge; shrubs cling to the walls, dead trees reach out in ballet poses. I used to skip up the rock like a mountain goat but in solo mode, I took careful steps.

Cobb Hut was olive green and unassuming as it had always been. Then on through the flat stones laid like paving to Fenella as the mountains drew me in. I stepped onto the deck of Fenella Hut almost laughing with elation. Inside, the dented black billies, the Maori style bunks, the rack for drying wet clothes. It was as though I’d been there just last summer.

I stood on the deck to watch the mountains, excited to be alone. Until 5 o’clock. Then a big Dutchman arrived.

“Are you the only one here?” he asked. I nodded.

“And I’ve just come to spoil it for you,” he said. 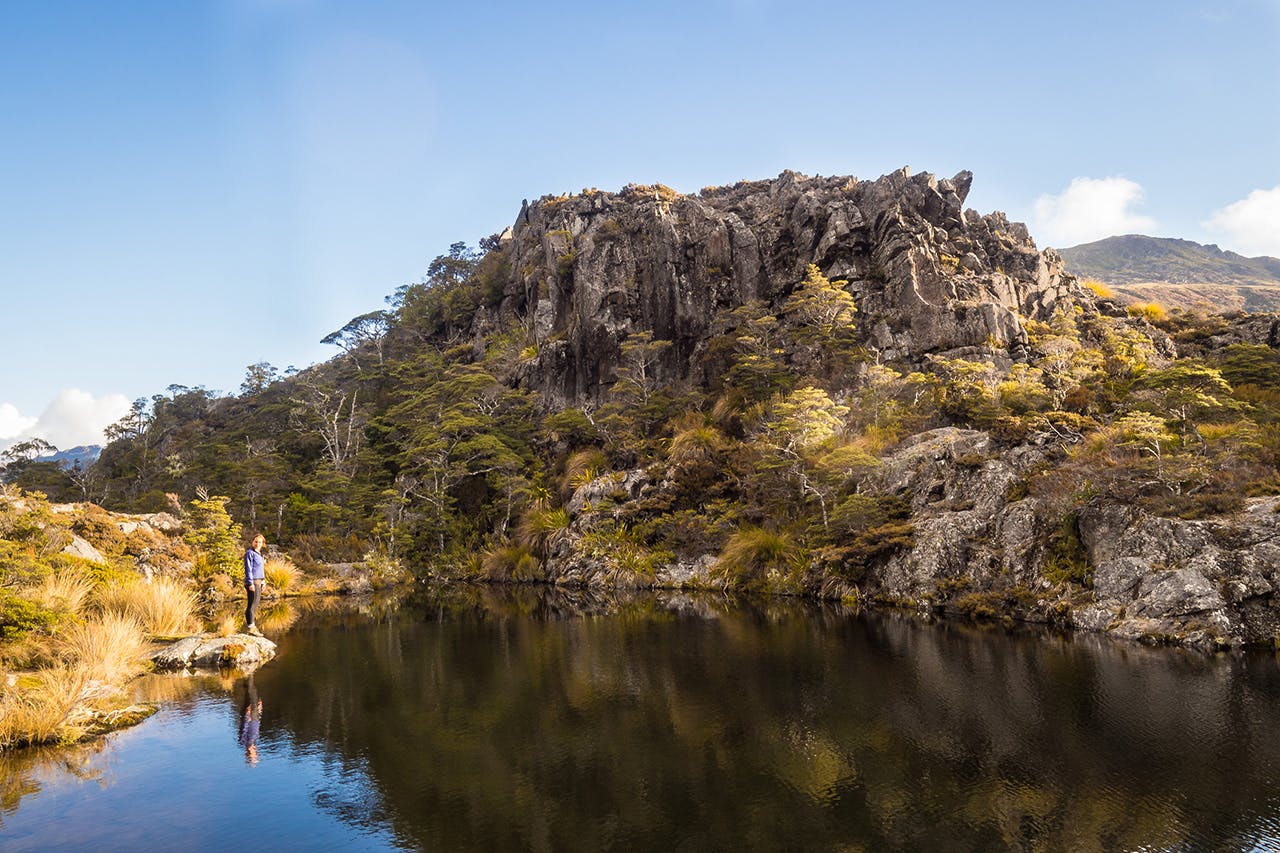 We cooked dinner and sat in front of the open fire – technically it was a free-standing fire but the Dutchman was convinced the door had to be open for the heat to get out. He shared his red wine so I didn’t argue. He was an architect based in Rotterdam, a good place for architects, he said, because the Second World War had destroyed so many buildings. I didn’t tell him my uncle, a pilot in the RAF, had contributed to the rise of architects in Rotterdam.

Around 7.30pm, tramping boots clumped on the deck outside. Cathy and David had done a hell walk over the top from Sylvester, 11 hours. They looked exhausted, but the next morning they announced they were heading up to the top between Mt Xenicus and Mt Gibbs, down to Round Lake and back to Fenella. They invited me to join them. They also convinced the Dutchman to come part way before heading back to Trilobite via Cobb Lake.

“Will I be OK in my short trousers?” he asked.

It was going to be cold on top, swirled in dense cloud. David and Cathy loaned me some waterproof leggings. I used my pack as a daypack to carry a jacket, lunch, scarf, gloves and hat. We walked up past the tarns reflecting the sky and selected a lower gear to climb up a cairned track. The Dutchman left us at the fork in the track and we continued up and over through a forest floored with swirling golden fronds. In the next valley we looked up the steep slope to the ridge, many vertical metres above.

We each took our own way up. I have a bad habit of taking the next easy step without planning the big picture, so sometimes I’d suddenly hit a small bluff or a mass of unruly boulders or a squishy creek. Just before the top, we stopped on a tiny ridge to add more layers before hitting the cold. On the ridge at nearly 1500m, visibility was just metres; it was freezing. Exciting. Wild. Never, ever would I have come up here on my own.

It was too cold to stay long. We scrambled down over boulders to Round Lake nestled at the bottom of a steep, scree slope.

The last time I was here, aged 13, we’d come from Cobb Hut, had lunch and discussed how to get to the top. Everyone had a different theory, but to me it was obvious: straight up.

I got myself into a near-vertical patch of scree. I couldn’t go left or right. Or up. Or down. Finally, my entire existence depended on a small hebe as I hefted up to the next firm purchase. The hebe held. Adrenalin berated me in every vein.

When I finally reached the top, I was alone. I assumed the others had started a search party looking for me. I was in trouble for sure. It turned out, they were still on their way up; I’d won the race.

But it was too cold to reminisce for long. David and Cathy found the track to Cobb Lake; we skirted its shoreline and continued on to Fenella for another night. This time I really felt like I’d achieved something.

Since then, I have got back into tramping, although baby steps, so far. I did Boulder Lake, traversing a slip that terrified me, the Heaphy Track which was so beautiful I can’t wait to go back, the Leslie-Karamea where I lost my mojo through poor preparation. Finally, the biggest step I took was moving back to Golden Bay so I can see the mountains every day.