The most successful kakapo breeding season on record is thanks to the hard work of scientists, rangers and volunteers – and gadgets that might have come straight out of James Bond’s Q Branch. By Alistair Hall

How do you grow the population of kakapo when kakapo can’t do it themselves? Email helps.

Each morning during the kakapo breeding season, which runs from late summer to early autumn, Dr Andrew Digby turns on his computer to get the latest updates. He’s not hoping to hear from family and friends, though living in a tent for several months on the remote Whenua Hou/Codfish Island near Rakiura, you could understand if that was the case. What he’s really hoping to see is a graph with a simple red line on it.

Simple as it may appear, the red line is significant: it means kakapo on Whenua Hou or at Anchor Island in Dusky Sound have mated.

The emails are generated by a little device attached to each kakapo that measures activity, recording the length of time an encounter with another bird lasts (up to an hour!), which bird the encounter was with and, on a scale of zero to 99, how vigorous that encounter was. The information is then sucked from the device by one of several remote data loggers and sent via satellite to Digby’s computer, where it’s decoded and presented in graph form.

“It’s brilliant,” says Digby, an astronomer turned conservation scientist working on DOC’s 25-year-old Kakapo Recovery Programme. “It’s saving us a lot of time running around trying to get signals from birds on the ground, which is really intensive. We just check the email in the morning and we know who has mated with whom.” 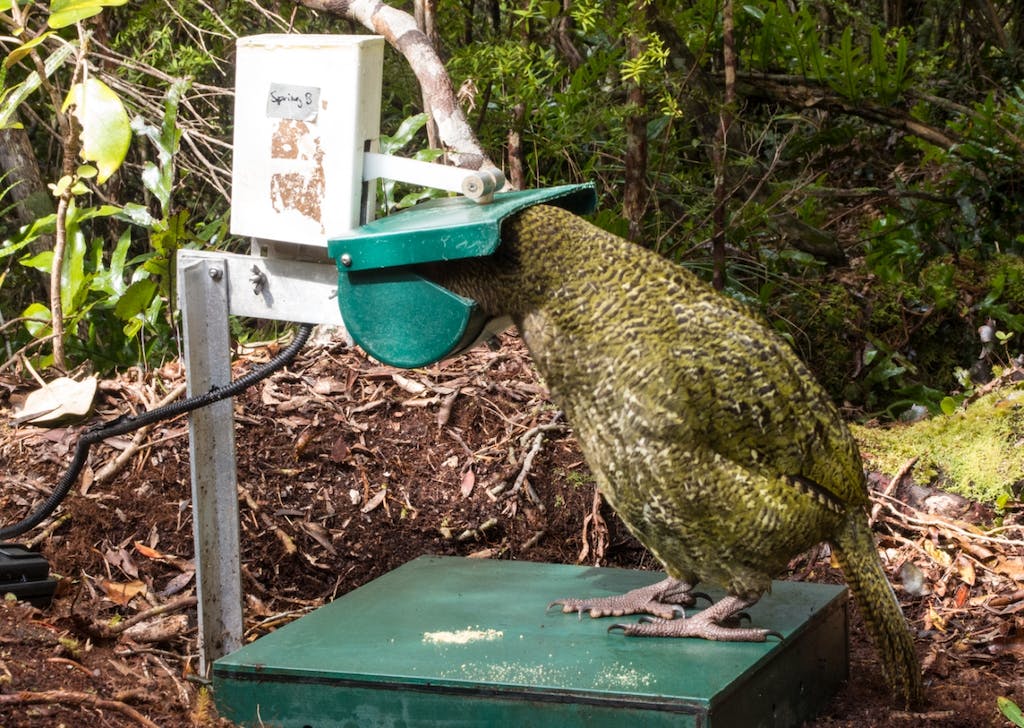 Technology like this is having a big impact in the fight to save kakapo from extinction. There are just 123 kakapo remaining, up from a low of 51 in 1995 but down from a high of 125 in late February when two adults died.

“We need to get the population up – we’re at 123 at the moment which is critical, they could go extinct next year if we’re not careful,” says Digby.

Fortunately, extinction is looking less likely this year with kakapo numbers set to skyrocket. Though the flightless parrots are notoriously infertile – only half of all eggs laid are fertile – the 2016 breeding season saw a record 120 eggs laid. Only 56 of those were fertile and by the end of March, 47 had hatched. But Digby won’t be counting his chicks until they’re at least one month old – that’s when they’re big enough to make survival more likely.  To illustrate just how precarious life as a kakapo is, only 38 of hatched chicks were still alive by mid April. Even so, this breeding season should eclipse the most successful ever – 2009 when 33 kakapo chicks survived.

“Every now and again you get these big jumps and that’s what really increases the population,” he says. So many eggs were laid this year because rimu were in mast, producing an abundance of seed which prompts the females to mate. Rimu were also masting in 2009, but most years, just a handful of chicks are born, which barely covers the attrition rate. In 2014, six chicks hatched, but four other birds died.

Because kakapo are intensively managed on safe haven predator-free islands, the main impediment to the growth in numbers is the issue around fertility – a result of the lack of genetic diversity that comes from such a small population.

Which brings us back to that morning email. Kakapo are not particularly good at choosing partners. Some females pick close relatives, which can lead to genetic issues down the line. Digby can tell at a glance of his graph if an undesirable mating has occurred. If so, he tracks down the female and attempts artificial insemination using sperm from Gulliver, one of only three descendents of Fiordland kakapo and with disease-resistant genes not found in any other kakapo. Digby has attempted to inseminate 12 birds this summer, though he won’t know until the chicks are born and their blood tested if he was successful. There’s certainly no harm in trying. 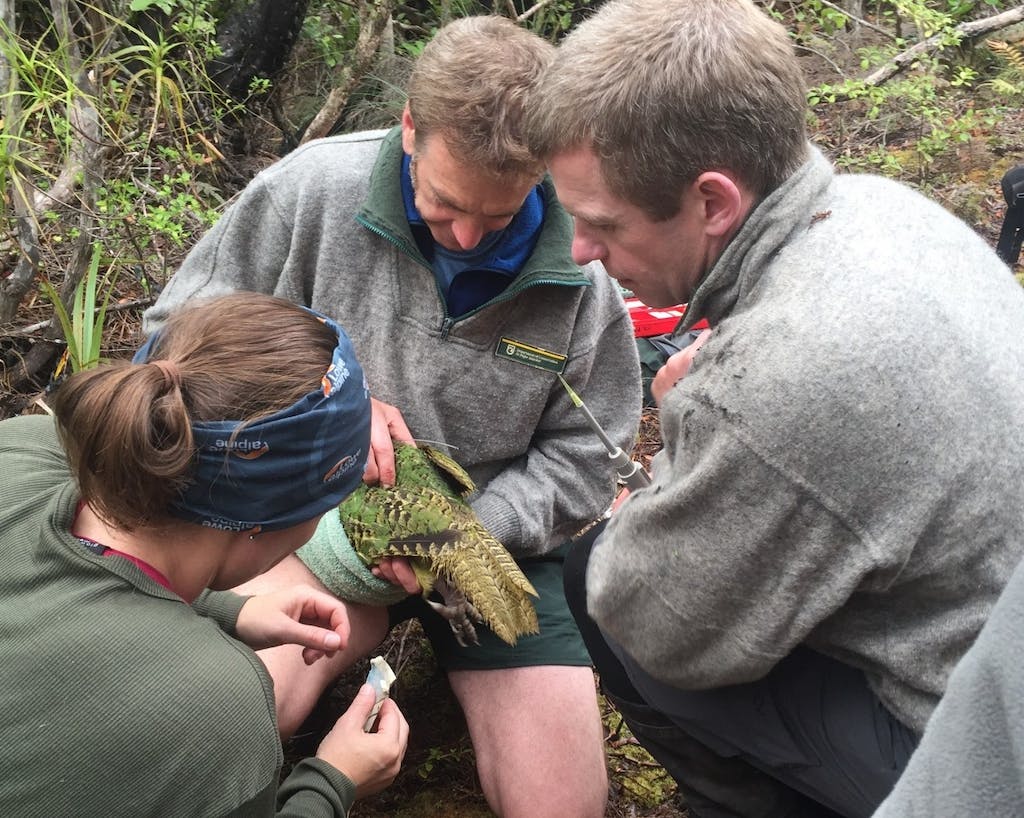 To ensure the genetic strength of offspring, artificial insemination is used on females who select a poor mate. Photo: Supplied

“The more sperm the better,” he says, explaining the phenomenon of sperm competition. “If the female mates with one male she has a certain level of fertility: if she mates with the same male twice, her fertility goes up, and if she mates with different males, her eggs are even more likely to be fertile.”

If kakapo are not particularly good at choosing their partners, they are positively terrible at being a parent. Leila Jeffreys, a Sydney-based photographic artist specialising in bird portraits, spent two weeks on Whenuahou as a volunteer. She says spending eight hours a day tramping over rutted and muddy tracks to fill feeding stations was one of the best experiences of her life: “The first few days I was thinking ‘this is impossible’, and then as it went on it was the best thing I’ve ever done,” she says. “I just loved it.”

But the self-confessed parrot lover was surprised at the parenting techniques of kakapo females, who, perhaps through lack of experience, seem to have lost the motherly instincts found in most other species.

“You don’t want to be mean to the kakapo, but they are really hopeless parents,” she says. “Some of the mums were getting the food down the wrong part of the baby, they’re leaving them too long and they’re getting too cold. [Or the mum is] suffocating its babies, she doesn’t know what she’s doing.”

There are gadgets for these problems, too. As well as remote weighing scales at each feeding station to check on the health of the adults, there are cameras in the nest so chicks can be monitored remotely. Proximity alarms called snarks alert the rangers when the mother has been away from the nest for too long or when a male gets too close, and infrared tripwires ring a doorbell when the mother leaves the nest, prompting nearby nest minders – people who sleep in tents just outside – to check on the eggs or chicks.

Technology helps, but it’s still a 24/7 job looking after kakapo, especially for nest minders.“Sleep deprivation is a symptom of the kakapo breeding programme,” says Digby. “You have to get up and run down to check the chick. It can be blowing a gale and sometimes you have to wait for [the mother] to get back, trying to keep yourself awake looking at this little TV monitor.”

Not that they need the mother to be away from the nest. Some kakapo allow their chicks to be taken from right underneath them. “It’s crazy, they just let you do it,” says Digby. “Sometimes they’d give you a little nibble on the knuckle – kakapo can really hurt you if they want to, they’re an extremely powerful bird – but they are amazingly accepting which helps with our management. But it does make you wonder, if I was a stoat going into your nest, I’d hope you’d put up more of a fight.” 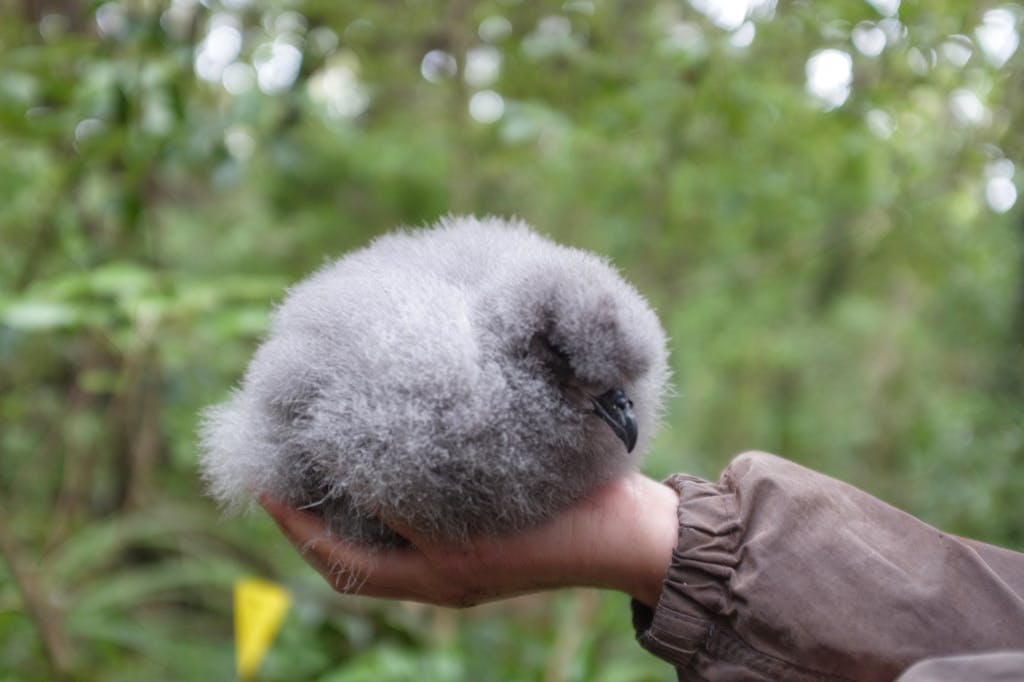 Digby had been nest minding for a solid month when he took a break to Wellington in early March. Though it wasn’t really a break at all: he went to Zealandia where he announced a world-first conservation initiative: Kakapo 125+, a crowdfunding campaign to raise US$135,000 to sequence the genome of every living kakapo. The funds for the first 40 birds have already been raised.

“It’s a world first for us, it’s a bit ambitious,” says Digby. “But it will make a huge difference to our programme. We’ll know all of the genes in all of the kakapo. That’s never been done before, as far as I know, for any other species. And we can do it because there are so few kakapo.”

It’s important because the data that comes from the Kakapo 125+ project (by the time the project is finished, it’s hoped this year’s crop of chicks will have been added to the originally planned 125 birds to be sequenced) will make managing the remaining birds that much easier, especially in terms of pairing them up to produce the best genetic result for the offspring. “We’ll find out exactly why some individuals will be infertile or why some will be more susceptible to disease,” says Digby. “It almost tells you everything there is to know about a particular bird.”

Humans can get their genome sequenced, too. It costs about $1000, but it’s not something hypochondriacs should consider: it could reveal if you’re more susceptible to have a heart attack or to develop a certain type of cancer. While such information might be frightening for people, when you’re fighting to bring a species back from the brink, genome sequencing is a crucial tool. “It’s exactly the sort of thing we need to do long term,” says Digby. “We have these issues with disease, we have these issues with fertility and we need to understand more about them. It will really help our management.”

The Kakapo 125+ project’s real importance goes beyond being a world-first; it’s about extinction prevention and will bring the Kakapo Recovery Project’s long term goal closer to fruition: to release kakapo back onto the mainland. Numbers would have to get well beyond 125 to do so. Digby doesn’t know the exact number they would settle for, but says off the top of his head 400-500 should be enough. That’s still many years away.

In the meantime, he’ll keep checking his inbox for those emails.

– To find out more about Kakapo 125+ or to back the genome project, head to experiment.com.