It’s all hands on deck as DOC employs the help of volunteers to tackle wilding trees in the Mackenzie, by Fraser Crichton

Just outside Twizel, on SH8, there’s a road sign that reads ‘Twizel Town of Trees’. I pass it now with a wry smile. Wilding trees, self-sowing pine trees in particular, are a notorious environmental problem in the Mackenzie. Every year DOC’s Twizel office runs a week-long Wilding Tree and Weed Control Programme aimed at educating volunteers and controlling wilding trees.

If you drive from Twizel to Mount Cook Village on SH80 you’ll see along Lake Pukaki an infamous example of the wilding tree problem and the number one pest pine in the Mackenzie: Contorta pine. Contorta spreads seed – or cones – prolifically. Seedlings are found, spread on the prevailing wind, hundreds of metres from the seed source. Once this happens controlling further spread is, as Willemse bluntly says, “Like farting against thunder.”

Passing Pukaki Downs you’ll also see how densely contorta can grow. Once established, their resinous-smelling pine canopy blocks sunlight, starving native plants of light and forcing indigenous animal species out. This threat to native biodiversity is so great that contorta’s sale and commercial use is prohibited under the National Pest Plant Accord – wilding pines are weeds.

At Pukaki the problem is recognised and, according to Williamse, the landowner there is working with DOC to replace contorta and introduce a less invasive pine.

Our first day as volunteer pine loppers is at Killermont Station on private farmland adjacent to a DOC reserve. “At Killermont we’re helping the farmer get rid of some of his wilding problem in order to protect the conservation land,” says Paul. Farmers, DOC, Environment Canterbury and local conservation trusts work collaboratively on control. Adds Paul: “Wilding pines reduce farming and pastureland, so [farmers] are on the same side as we are on this, that’s why the collaborative [approach] is so fruitful.”

Pines have a ‘fire ecology’ – their cones open and spread seed when burned – so the only way to kill them is by uprooting or felling. Tackling immature seedlings, volunteers are armed with garden loppers and warned to ensure no needle bearing stems are left on the trunk from which pines can regenerate

Killermont is situated low in the Waitaki Basin and is dry, flat tussockland. Our next day was something of a contrast.

At 1100m, Stony Stream in the Dobson Valley, part of the Ruataniwha Conservation Park, was the remotest site we visited. The Dobson is stunning hill country. On the 4WD ride through the valley we passed alongside Lake Ohau and the Dobson River, home to banded dotterel, paradise shelduck and South Island pied oystercatcher. The Dobson is a braided river system with its source in the glaciers of Mt Hopkins.

From high in the valley, above Glen Lyon Station, we piggybacked a five-minute helicopter flight into Stony Steam. DOC uses helicopters for wilding tree control as they can cover large areas quickly, saving resources and money, and, as Williamse explains, “targeted spraying of one tree at a time means you are not poisoning the land.”

At Stony Stream we carried out a second pass over ground that was previously felled by a chainsaw gang. Pinecones are resilient; seeds can lie dormant and germinate up to seven years after falling to the ground. “You need to go through the same place at least twice, [removing] the later, younger generation that was still seed in the ground or too small to be cut down when we first came through,” says Paul. 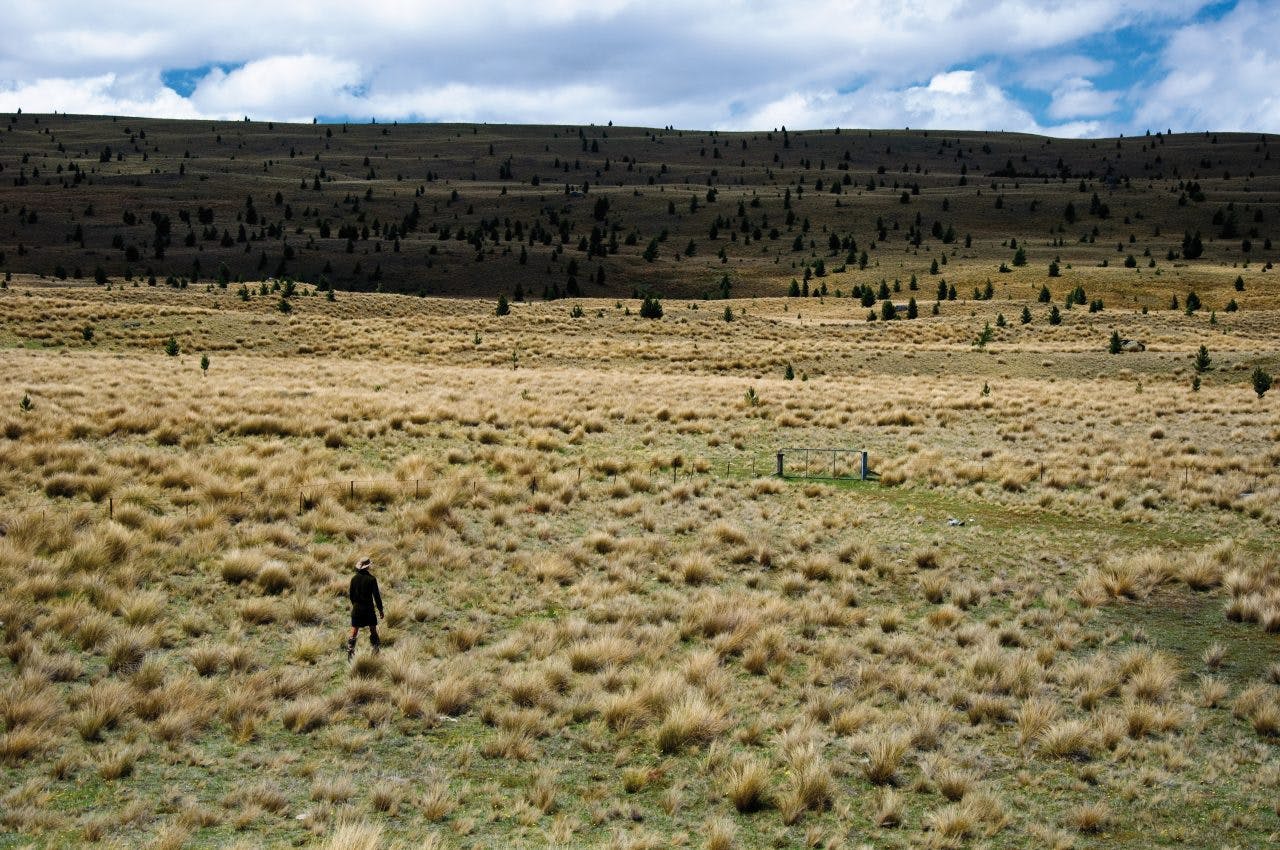 The following day was another contrasting landscape. The Wairepo Kettleholes, 14km along the Quailburn Road, are part of the low intermontane basin and are a legacy of the Ohau glacier which formed around 10,000 years ago. The kettle holes were formed when blocks of ice from the receding glacier carved off from its snout and become buried under glacial outwash debris. The kettle depressions and rolling red tussock hummocks are all that’s left of the buried ice after it melted. Kettles are normally less than 10m deep and less than 2km across. When they’re filled with water the kettles are home to wrybill, black-fronted tern, shoveller duck and one of the rarest wetland birds in the world: the black stilt. When dry, they support a diverse array of tiny herbs and turf.

After a long day at Wairepo we spent the next day back in the high country at Landslip Creek next to Braemar Station in the Gammack Range. It’s another spectacular and remote part of the Mackenzie with views across to the Ben Ohau Range.

On this exposed hillside, strong winds blow wilding seeds far; isolated pines stretch to the horizon. We worked down in the creek while above us contract chainsaw gang felled mature contorta.

On the last day of the volunteer week we visited Spring Creek Reserve, 12km south of Twizel just off SH8. It’s a unique reserve; one of the few protected areas in the low intermontane basin.

Wilding pines are not such an issue here – our target was rosehips. Deciduous rosehips require not only lopping but also the application of herbicide to ensure there is no grow-back.

Spring Creek’s 100 hectares of dry fescue tussock grassland makes it a fairly unspectacular reserve. It’s the kind of area some farmers refer to as wasteland. To really appreciate it you have to stick your bum in the air and get close to the ground. It’s a microhabitat; the plant and insect life is on a tiny scale and it’s exactly the habitat that conservationist are concerned about losing if irrigation and intensive farming are not carefully controlled in the Mackenzie.

Conservation awareness, one of the goals of the volunteer week according to DOC’s Ursula Paul, isn’t indoctrination. It’s about appreciating that conservation means engaging in complex issues related to land use, economics and a heritage of introduced pests like wilding pines.

To spend our last day in the Mackenzie high country at Spring Creek felt appropriate – it really is a landscape full of contrasts. “It’s a landscape that grows on people,” says Ursula. “Most people when they first come here see barrenness and brown. Once they’ve been here awhile they see colour; gold, orange, yellow.”

Reaches maturity in only seven years

Native to the USA

Banned, as a weed, by National Pest Plant Accord in NZ