Stepping out of the car at St Arnaud into the blistering January sun, I started to wonder if heading out on a four day tramp around the Nelson Lakes was a good idea. Not only would the temperature be in the high twenties for the next few days but it was peak summer holiday time, meaning the huts would be filled to the brim. Why hadn’t I just gone to the beach with a good book?

As we started the walk from Mt Roberts’ car park, the sun beat down but our packs felt light on our backs. In no time at all we were sheltered by the beautiful forest canopy, enjoying every step as we wound our way through the native bush. We had started late, so it was already 6pm by the time we arrived at Speargrass Hut, but feeling fresh and strong – as most trampers do on day one of a multi-day tramp – we decided to push on to Sabine Hut.

About two hours into it, we noticed a shimming light poking through the forest canopy and as we grew closer we could see it was the setting sun bouncing off Lake Rotoroa. The hut, however, didn’t seem to be getting any nearer and our previously fresh legs were feeling well used by the time we arrived there an hour later, just as dusk squeezed the last ounce of light out of the evening.

For some reason I have done most of my tramping in winter and spring. The huts are empty, the sandflies are dead and there is nothing like sitting around a roaring fire in your fleece pants with a cup of hot tea. But as I swam in the warm waters of Lake Rotoroa at sunrise the following day, I started to wonder if I had been missing out. While the huts had been full there was always room for our group of three and a full hut is not as bad as I used to think: it provides solo trampers with plenty of chit-chat, you can borrow some milk powder when you run out and, if you’re lucky, you might even make a few new friends.

The St Arnaud trip was not only one of my first summer tramps but it was also my first time back in the New Zealand bush after almost two years overseas. True to cliché, traveling abroad really does make you appreciate just how good we have it here in New Zealand. Our geographic isolation may make overseas travel difficult and expensive, but it also leaves our national parks relatively empty in comparison to those in Europe.

Not only did this tramping trip give me the chance to reacquaint myself with my homeland, but also to catch up with my old tramping partner Mark. We had not hung out in more than three years, so this tramp seemed like a good chance to make up for lost time. Completing the trio was Larrisa, a German tourist who had never done any tramping before. The 80km Travers-Sabine circuit was quite the baptism of fire for her.

“You guys are in for a real leg burner, it’s so steep from this side,” a woman from Utah said for a third annoying time as we loaded up our packs to set out for the Mt Travers’ traverse. As we began the walk up the pass it become apparent that Miss Utah had been correct, it was a steep slog. But it wasn’t as bad as she made out. 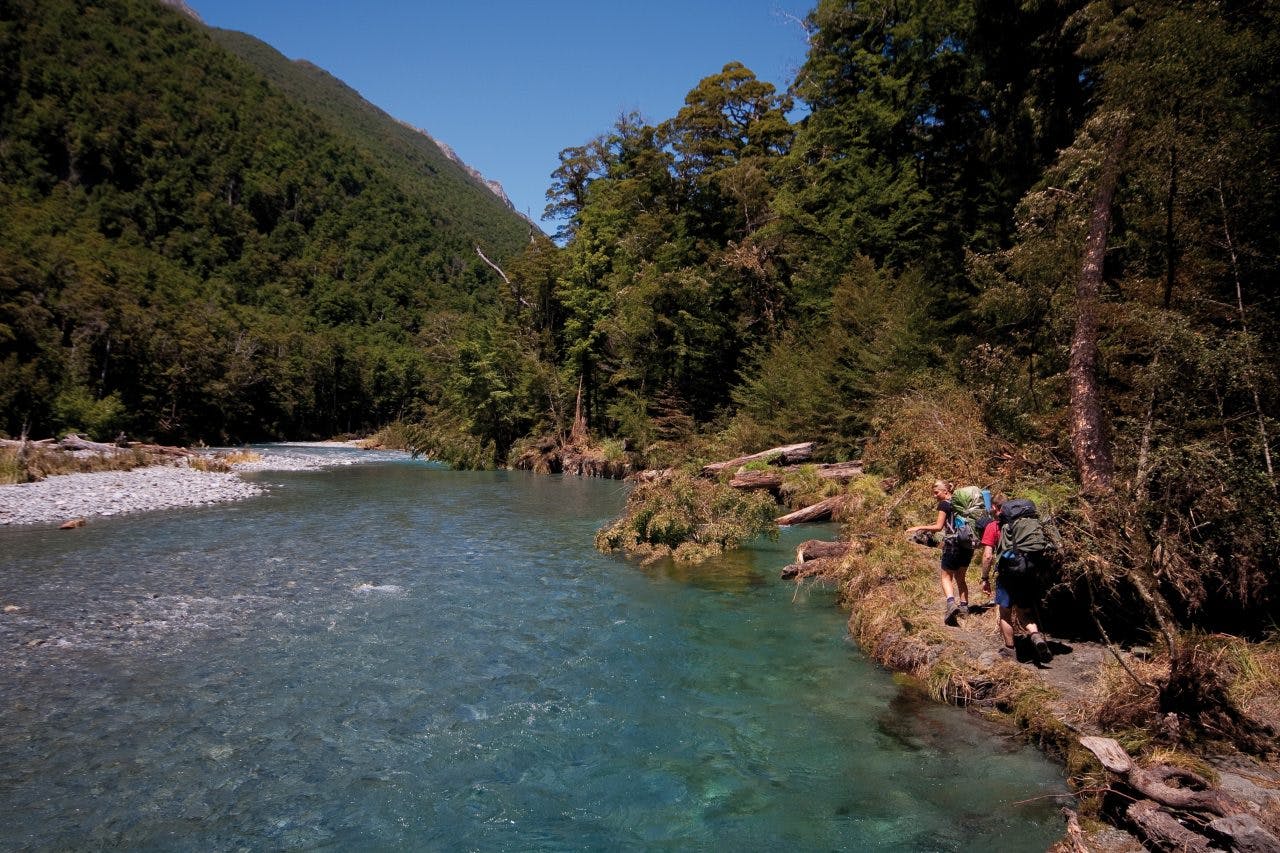 Just like every other day of the trip there wasn’t a cloud in the sky when we broke through the tree line into the sub-alpine tussock. A cool breeze compensated for the lack of shade. Behind us, the rocky grey peaks towered above the thick beech forest and clear waters of the Sabine River. As we continued our climb to the saddle, the steepness reduced and at last Mt Travers came into view.

After drink and rest we chucked our packs on and dropped into the other side of the Travers Range. As we jumped from boulder to boulder and navigated our way down, it soon became apparent that descending was even steeper than ascending. Soon, though, we were enjoying a pleasant stroll beside a mountain stream.

Arriving at Upper Travers Hut in the late afternoon we realised if we wanted to finish the tramp the following day we’d better push on to John Tait Hut, and so with legs tired from the traverse we continued on, dropping back into the cool shade of the bush.

John Tait Hut was built in the 1950s when Mr Tait decided a hut was needed for tramping and climbing in the Mt Travers region. Originally from Scotland, Tait took a strong liking to the Nelson Lakes because it reminded him of his homeland. He travelled to the area regularly with his family and as an active member of the Nelson Tramping Club, he was well liked for his dry Scottish humour and excellent organisational skills. He gained a reputation amongst club members as the man who got things done on time and with a smile on his face.

Arriving at the hut after a long day of ups and downs, we decided to freshen up with a swim in the river. But because the river water was much colder than Lake Rotoroa, the ‘swim’ was quickly truncated into a ‘wash’. With one bar of soap between the three of us we took turns to dunk ourselves into the icy water before popping out for a quick soap up followed by another ‘rinse’. Feeling clean and refreshed, we retired to the half-empty hut, where an Israeli tramper explained the firing capabilities of an M4 assault rifle over our tasteless couscous dinner.

Walking back down the valley towards Lake Rotoiti on the fourth day of the trip, we discussed why we liked the Nelson Lakes Region so much. While it may lack the awe-inspiring beauty of Fiordland or the accessibility of Arthur’s Pass, it has a warm and stable climate, excellent huts and tracks which enable you to walk for days up valleys and across mountains without ever getting your feet wet.

With the tramp over and car packed it seemed only logical that we finish the trip off with one final swim in Lake Rotoiti. Mark lunged off the jetty and ducked into a perfect tight circle as he flew through the air before splashing into the lake’s warm waters.

I guess summer tramping ain’t that bad after all, even with the sandflies.