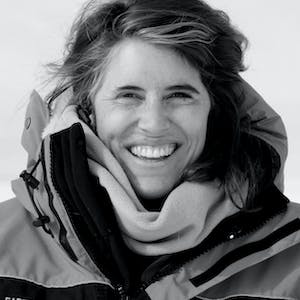 Mt Wakefield in Aoraki/Mt Cook National Park is ‘not your average mountain’, according to members of a worldwide spiritual organisation. A skeptical Anna Pearson joins the Aetherius Society on a mountain pilgrimage

Part way up a mountain in Aoraki/Mt Cook National Park a dozen hikers conduct a tense exchange. Gusts of wind strike at random, so fierce they force everyone to a crouch. Turning around seems the obvious choice. But several members of the party have come from overseas; they’re armed with cameras and anticipation, and to give up below the summit would be disappointing. They’ve come from America, England and Australia, with hopes of making it to a rock at the top of Mt Wakefield with words and symbols painted on it. Another gust, and they’re clutching alpine shrubs to hold steady.

“It’s just too risky,” says Julian Rosser, an Aucklander, who knows they have not yet reached the most exposed ridge. He has been up Mt Wakefield several times, which at 2058m gives views over Tasman Glacier and the icebergs in its terminal lake. But Chris Webb, an Englishman, urges the group on, seemingly frustrated with the decision to turn back. Jason Robertson, an Australian panelbeater, also holds his ground. Perhaps they’re being a bit hasty? “The Master didn’t give up this easily,” he says.

With binoculars, you’d be able to see the group clearly from the Hermitage Hotel in Mount Cook Village; they’d look like any old walking party, wearing suitable mountain attire. But Julian, Chris, Jason and the others are pilgrims on a holy outing. As members of the New Zealand branch of the Aetherius Society, a worldwide organisation combining Western and Eastern spiritual practices with cosmology, they believe the rocky outcrop in their sights is spiritually charged. Their plan, once atop Mt Wakefield, is to stand in a circle with their hands raised in prayer, chanting and sending energy out to places that need it most. Syria, for example, in the midst of a civil war, or Fiji, where islanders are recovering from Cyclone Winston. The pilgrims believe the mountain ‘potent-ises’ their prayer, like an amplifier on a radio.

The late leader of the Aetherius Society, George King, an Englishman, once said: “The most holy, the most sacred, the most God-like being you have ever physically touched, is the ground beneath your feet.” Pilgrims from the Aetherius Society take King’s message quite literally, slogging up mountains around the world to chant and pray. They call him ‘The Master’. The majority of the society’s members live in Nigeria, followed by England. The New Zealand branch, of which there are about 30 members, holds regular trips up Mt Wakefield, as well as Mt Kosciuszko and Rams Head in Australia. Today’s pilgrimage is expected to take three or four hours up and a couple of hours down. Fitter pilgrims have reached the summit in two. 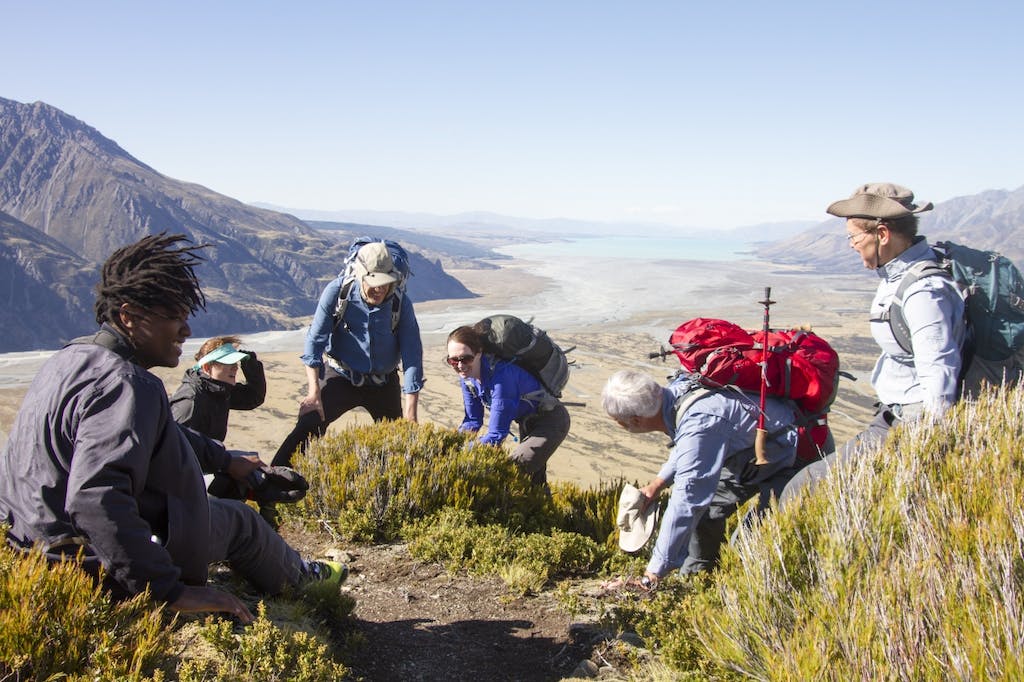 King, a former London cabbie who became a master of yoga, died in 1997 aged 78. He founded the Aetherius Society five years before his expedition to Mt Wakefield, after reportedly being asked by ‘cosmic masters’ to help bring a state of balance back to humanity.

As well as Mt Wakefield, King claimed to have spiritually charged 18 other mountains around the world in a three-year effort dubbed Operation Starlight. “Thousands of people have climbed these mountains … and had some amazing experiences,” says Frank McManus, a member of the New Zealand branch of the society. “Instant healings have happened, people have felt the energy like electricity, they have seen visions of many things, their consciousness has been changed.”

King, who was said to have been a psychic, expert boxer, marksman and a ‘Dr of Divinity’, experienced extreme ridicule for his beliefs and was even spied on by detectives who thought he was a communist. He once went into a trance live on BBC television, claiming to be relaying a message from Venus. In a letter to his followers, he said their actions may be regarded by unthinking people ‘as those of an eccentric’. But he urged them on, encouraging them to ‘bridge the chasm between ignorance and enlightenment’. Every ‘holy’ mountain is reportedly charged with a different energy; Mt Wakefield’s is the energy of love’s expression.

King and his assistant, Keith Robertson, scaled Mt Wakefield in 1960. According to The Press’s archives, they got lost and spent a cold night out. In a news article, the manager at the Hermitage, Mr Dennis, described how the pair left the hotel with a packed lunch and the intention of climbing the mountain to take photographs. There was no mention of their greater, more cosmic mission. But King and Robertson were not used to the terrain and ‘took a quick way down which proved impossible’, Dennis said. They ran out of daylight and spent an uncomfortable night exposed to the elements, taking turns to rub each other’s backs to keep warm. The next day, King and Robertson turned up in Mount Cook Village just as locals were preparing to mount a search.

Importantly, for the Aetherius Society, before King and Robertson got lost on December 24, 1960, they made it to a rocky outcrop on Mt Wakefield. There, the society claims, King was contacted by Jesus, who charged the mountain with majestic spiritual powers which can never be depleted. Robertson used white paint to write ‘Holy Rock’ on a slab of greywacke where the rendezvous occurred, so future pilgrims would know where to go. 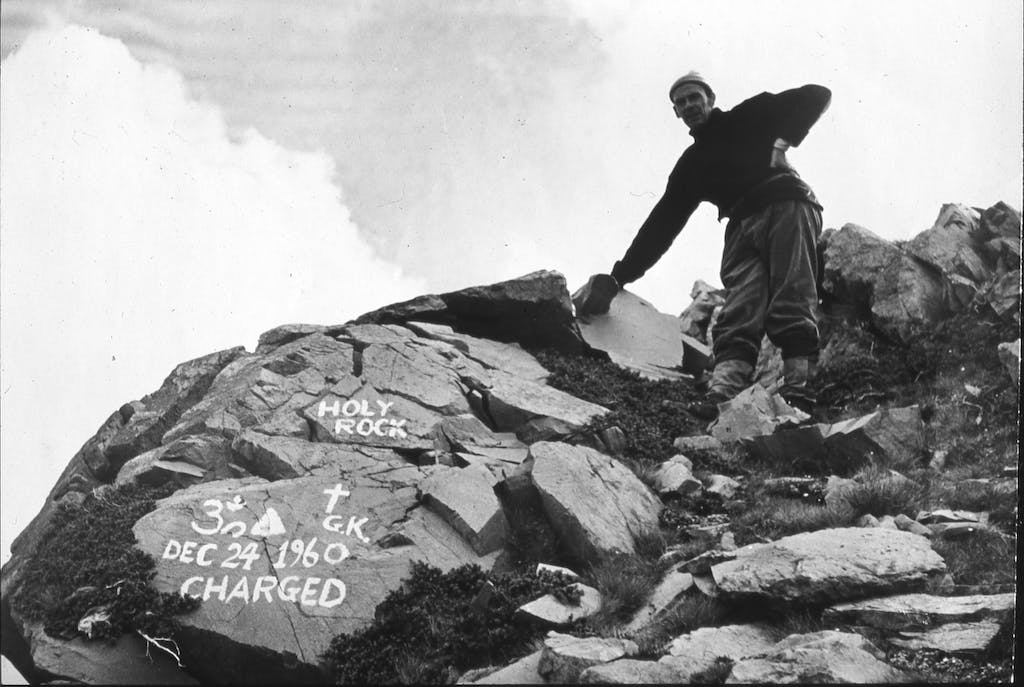 All this happened eight years after Aoraki/Mt Cook National Park was gazetted, well before Aoraki/Mt Cook was deemed a topuni (a specially protected area) under the 1998 Ngai Tahu Deed of Settlement Act. “You could argue that it is a historic site, but at present [it] is not listed as that,” says a spokeswoman for the Department of Conservation. “It could be a topic for public discussion with the next park [management] plan review.”

Frank McManus, 59, is an olive-skinned, soft-spoken man; a naturopath who runs a home maintenance business in Auckland. He’s also the organiser of the New Zealand branch of the Aetherius Society. Like other members, he believes in selfless service to others, yoga, spiritual energy, prayer and healing, the ‘divine within’, intuition and psychic powers, Mother Earth, karma, reincarnation, extraterrestrial life and UFOs – a real mash-up. He says Jesus, along with Buddha, Krishna and other religious leaders, were emissaries or diplomats sent to Earth from outer space. “Some people call us a cult but they are people who just make statements without any form of investigation,” he says.

Frank has been up Mt Wakefield about 25 times and insists he once saw a flying saucer at the summit – silver and hovering above the charged spot. He sketches a picture of it on paper; it looks like an upside down bowl, with circular windows, on top of an upside down plate.

Julian, who has been a member of the Aetherius Society for 11 years, met his American wife on a pilgrimage to Mt Adams in the northern Presidential Range in the United States. At their wedding, about six months ago, friends joked they should set up a dating site called pilgrimage.com. Back on windy Mt Wakefield, the 41-year-old and other more experienced pilgrims succeed in encouraging the group to turn back. Julian acknowledges it’s disappointing for those who have come a long way but says the ridge above is “so exposed it’s not funny”. Olav Solberg, also from Auckland, says they can pray lower down because the whole mountain is charged. Frank says safety is important. “We’re not mountaineers, we’re ordinary people on a spiritual quest.” 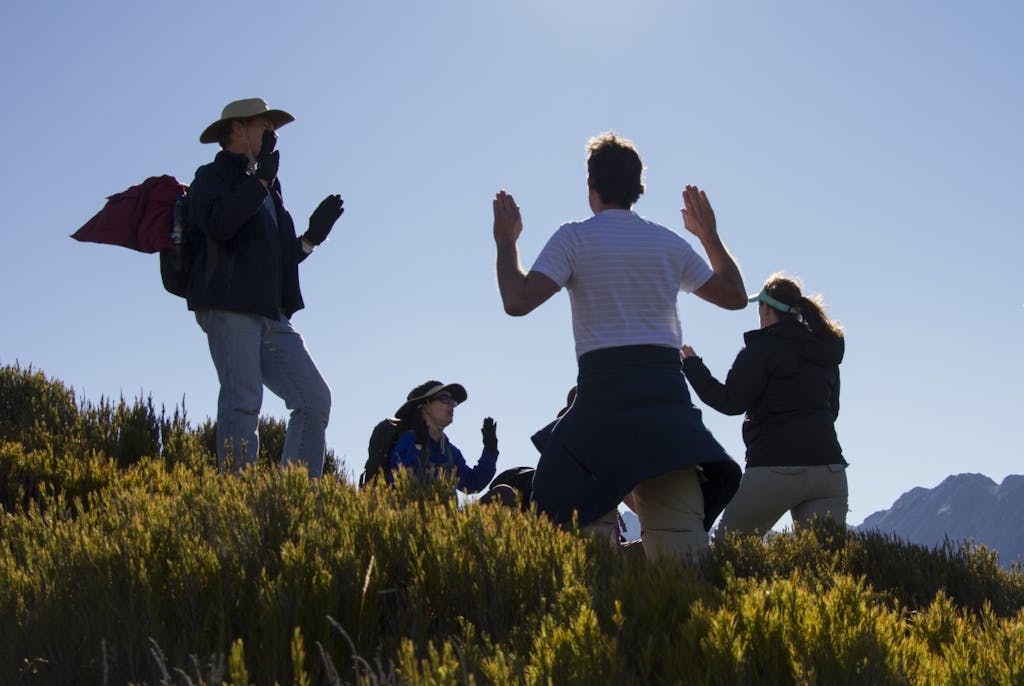 The group retreats to a grassy hollow where they eat lunch. Rodney Crosby, from Los Angeles, is disappointed but philosophical. “Nothing is ever guaranteed when you come to a mountain,” he says. The group forms a circle and Frank leads them in prayer. They chant ‘om rama’ with their eyes closed, appearing to be in a meditative state. I stay on the sidelines, preferring to observe and take photographs. The wind is still intense and at one point, Julian’s wife is blown clean over, tumbling along the grass. Below, the Hooker River rushes by, grey and murky with rock flour. The Hermitage looks like a toy.

Later that afternoon, after another prayer session further down, Simon Thode, a gentle 65-year-old with a beard, a lawyer who “could not understand orthodox [religion] at all”, tells me they were “sending energy out into the world”. Simon says he wants to help displace negative energy in places like Syria. “No political system is going to do that. That’s why I joined,” he says. “There was definitely energy there and it moved me a lot. You don’t see the results. We just know it will help.”

According to Te Ara – The Encyclopedia of New Zealand, nearly every prominent peak in the country is linked to local tribal identity and mana amongst Maori. Special reverence is given to higher peaks such as Aoraki. Frank says people have been going to mountains and invoking energy for centuries. “When Europeans do it, we think it’s weird. Why?” While plodding up Mt Wakefield, my own skepticism is apparent. “All we say is investigate,” Frank says, unflustered. “Reality is an ever-expanding room.”