As a kid Ken Arnold and his mates paddled up the Waitangiroto River on the South Island’s West Coast, hoping to catch a glimpse of something special. And they did. Above the river bank in only a few selected trees is the country’s only white heron colony.

Returning every September through March to the same kamahi, mahoe and kowahi trees, the elegant birds breed in what is now a protected nature reserve. Thanks to White Heron Sanctuary Tours, in Whataroa, the only company allowed to take groups to the nesting site, a healthy number of these birds can be seen from across the water in a comfortable hide. But this hasn’t always been the case; at one stage the white heron population dropped to alarmingly low numbers.

Naming them kotuku, Maori symbolised the white herons with mystic and good fortune – only those of high rank or chiefs were permitted to wear an occasional white heron feather in their hair. When early Europeans came across the colony in 1865, district surveyor Gerhard Mueller wrote about them with passion, but others following treated them with far less dignity. It wasn’t long before the bird’s plumage became a prized accessory in women’s hats and the nests were plundered and vandalized. By the early 1920’s only four pairs of white heron remained.

In a desperate bid to halt their demise, a no logging zone 60m either side of the Waitangiroto River was declared in 1924. By 1949 it became a fauna and flora reserve and a local resident was appointed honorary ranger, undertaking predator control, monitoring of birds and restricting visitors during the breeding season. Some eight years later, the colony was gazetted as a wildlife refuge, later becoming the Waitangiroto Nature Reserve, although entry to the nests was still restricted.

He married Shirley, another West Coaster from the nearby sawmilling town of Hari Hari and they remained in Whataora with their four children. Sharing a love of the area, they also shared a dream – to one day take visitors to the white heron colony so everyone could share in its beauty.

In 1985 they approached the Department of Conservation with a proposal and three years later, at about the time tourism ventures began to take off all over New Zealand, DOC called for tenders. Ken and Shirley’s proposal was accepted on the basis of a one-year trial and they’ve never looked back. They are now in their 21st season of tours.

Reaching the colony involves transport by jet boat, trailer and barge. When we were there, about 30 pairs of white heron were nesting and feeding chicks in trees above the river. Like apartment dwellers, they went about their business taking no notice of their near neighbour’s existence. 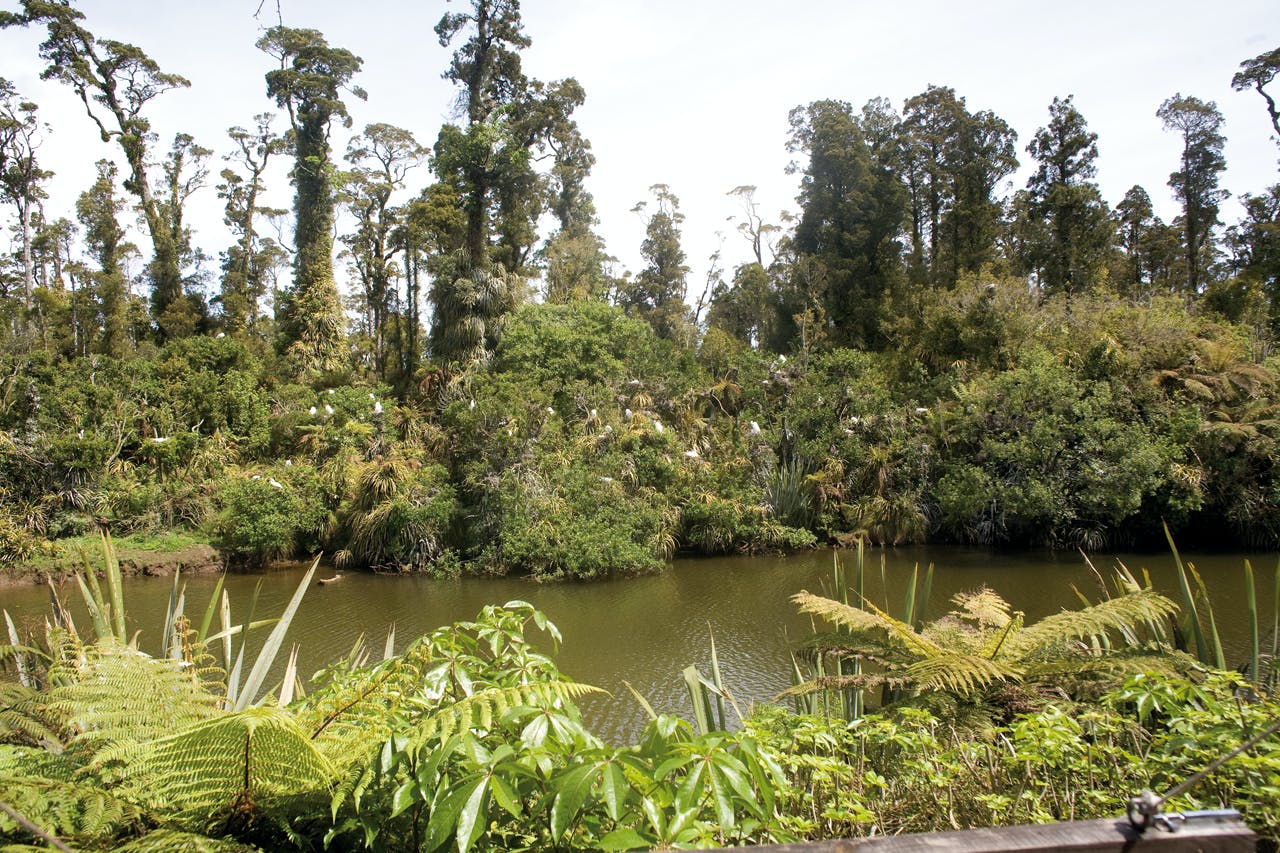 There are between 32 and 40 breeding pars of white heron in the sanctuary. Photo: Kelly Lynch

A telescope inside a hide gives sharp views of scrappy nests crafted from twisted sticks. Some were filled with the soft, snowy white feathers of chicks, their bright orange beaks emerging from the fluff while adult birds with elegant long slender legs under a pure-white feathered body draped with bridal-like plumes, stood by preening.

During courtship, the white heron’s beak changes to a blue-black colour, the area around the eyes turns emerald green and their showy plumage feathers stir, fan and ruffle about in peacock-like fashion.

Sharing the same trees are royal spoonbills, with their long black bills, and little shags, nesting directly beneath the herons, with distinctive black coats a contrast to their white throat and cheeks. Tree ferns and kiekie trees are foreground to towering giant rimu and kahikatea that thrive in the surrounding swampy wetland. The area receives about four metres of rain annually, and nearby Okarito Lagoon, 3000ha of shallow water and tidal mudflats, is the bird’s feeding ground stocked with fish, frogs and shrimps.

When DOC first began monitoring the colony in the early 80’s about 25 heron pairs nested there every year. Today numbers have increased to somewhere between 32 and 40 breeding pairs. Despite each breeding pair laying a clutch of about three pale blue eggs, usually only one chick will survive. Ken attributes this to the area’s wild, wet weather and when the lagoon is blocked a shortage of food, because as the water deepens it prevents the wading birds foraging.

Each year between 25 and 30 stoats are trapped, but much harder to control are the harrier hawks. Ken remembers the morning that the Duke of Edinburgh visited in 1991 when “a hawk had cleaned out five of the six nests”.

This is all done at the expense of White Heron Sanctuary Tours, which is now a family affair with eldest son Dion taking the tours. The operation has helped keep Whataroa on the map. It’s a small rural town and when the maternity hospital closed Ken and Shirley purchased it, transforming it into a 12-unit motel. Later, when the ex-Ministry of Works single men’s quarters became surplus to requirements, the Arnold’s bought and upgraded them – they now serve well as accommodation units in the township.

The Arnold’s dream of opening the white heron colony to visitors is a true success story of how carefully managed nature tours can benefit not only the wildlife and visitors, but also the economic survival of a small struggling town.