Mountain Safety Council is urging people planning outdoor adventures to visit the AdventureSmart website to ensure they don’t end up another statistic in its National Incident Database.

Already this summer, six hiking related deaths and a handful of near misses have brought a sombre note to the start of the tramping season. MSC believes this is a higher number of fatalities compared with the same time last year.

Mountain Safety Council chief executive Darryl Carpenter said the deaths are a “sombre reminder” of the need to be thoroughly prepared when going into the outdoors and to take extreme caution, especially when crossing rivers.

“Anyone going into the outdoors needs to plan well, to be aware of the dangers and have the skills needed for a safe and enjoyable experience,” Carpenter said. “Thorough preparation and careful decision-making is essential to keep people out of danger.”

In a joint initiative, which began in 2009, leading outdoor organisations and government agencies created and this year have expanded, the AdventureSmart.org.nz website.

The aim of AdventureSmart is to provide people venturing into the outdoors with one online location for safety information and planning support, prior to engaging in land, snow, water, boating and air activities.

New Zealand Search and Rescue Council’s Duncan Ferner said AdventureSmart has good advice for everyone, regardless of ability or experience.

“Access to this information means those taking part in recreational activities on offer in New Zealand will be better prepared and make better decisions which will in turn hopefully reduce incidents,” Ferner said.

AdventureSmart offers more than a thousand links to safety information from relevant organisations, detailed information including videos on avalanche awareness and the outdoor safety code, plus links to where people can learn more about their chosen activity.

There is also a comprehensive Outdoors Intentions process for land-based activities, including an online intention form for trampers to complete and submit.

It provides people with easily accessible ways to tell others where they are going plus when and how to raise the alarm if they haven’t returned.

People heading into the outdoors are advised to tell more than one person where they’re going and when they’ll return. Hiring or buying personal locator beacons is also advisable for trips into the backcountry.

The Department of Conservation is hoping to close Mataitai Conservation Area in the Hunua Ranges by early February in an attempt to save Auckland’s oldest and largest kauri forest from being infected by kauri dieback.

Kauri dieback is a microscopic fungus-like pathogen that’s spread through the movement of contaminated soil and water.

DOC’s Auckland area manager Brett Butland said the Mataitai Conservation Area in the Hunua Ranges has “680ha of magnificent kauri forest completely free of kauri dieback”. The disease can kill kauri of all ages and is spreading through Auckland and Northland.

“To stop this destructive disease from spreading to the healthy kauri in Mataitai Forest we’re proposing closing the tracks in the reserve,” Butland said. “Kauri dieback is killing large numbers of kauri in some infected areas. The last thing we want is for it to infect Auckland’s oldest and largest kauri forest.”

One kauri in Mataitai Conservation Area is more than 800 years old.

Butland said the department is talking to trampers, local residents and iwi in the area about the proposal and the feedback has been positive.

The Manukau Tramping Club formed, named and maintains Mataitai’s many tracks. MTC President Janet Gibson said the club agrees “one hundred percent” that Mataitai must be protected from kauri dieback.

“I’ve seen trees infected with kauri dieback. It’s terrible,” she said. “We don’t want our kauri in the reserve infected with this devastating disease.”

Kauri dieback was first identified as being the cause of kauri deaths in the Waitakere Ranges, the Awhitu Peninsula and the Rodney area in 2006. Since then it has been identified in Northland where it has infected kauri in the Trounson Kauri Park and Waipoua Forest.

Stoats still at large on Kapiti 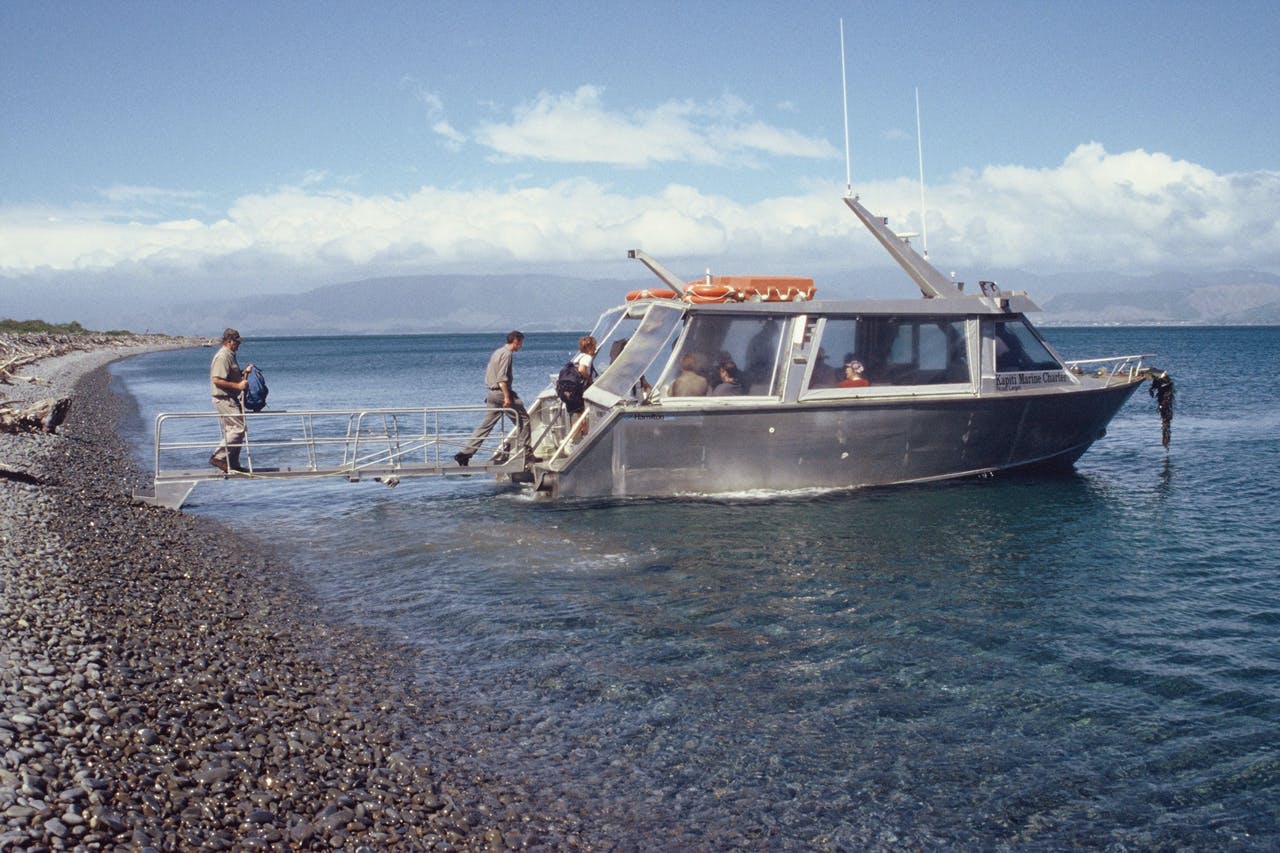 DOC has intensified an eradication operation that’s part of a year-long campaign to hunt down marauding stoats on the once pest-free Kapiti Island.

Three trappers will be working the island until the end of February, checking traps every five days and using rabbit meat to lure stoats in.

The campaign began in November 2010 when a stoat was first seen on the island which first became pest free in 1997.

Since then, three stoats have been caught on the island with DNA analysis suggesting one female was the mother of the other two who were likely born on Kapiti Island around October 2009.

Because stoats give birth to 8-10 kits (young stoats) on average it means DOC can’t be sure how many stoats remain as other females could have been born in the 2009 litter resulting in the potential for more pregnant females.

One of the stoats caught was pregnant.

“It’s a big island and stoats don’t present themselves naturally and they don’t go into traps or tracking tunnels willingly,” Stone said. “They’re free on an island where there are tons of food sources and tons of holes so it’s quite hard to persuade them into a trap.”

Once the last animal is caught and no further stoat sign is detected, DOC must continue intensive searching with dogs and ongoing trapping for another two years to confirm eradication has been achieved.

“In that time if we find more indication that two year period would start again,” Stone said. “This is a long term project.”

No one knows for sure how the invading stoat got to the island, but Stone said DOC is not ruling out the possibility it was put there maliciously.

“In the past people have threatened to put possums on Kapiti Island which most likely they didn’t, but we can’t rule it out [in this case],” Stone told Wilderness. “No one has put their hand up for it so whilst we’re not ruling it out, we think it’s unlikely.”

If not put there intentionally, the stoat may have floated, in a storm event, on a log down a river out to sea and then jumped off and swam to the island, said Stone.

Stoats are strong swimmers, known to have crossed water gaps of up to 1.1km to reach islands. Kapiti Island is more than 5km from mainland New Zealand.

Stone said DOC has not found a major decrease in bird population numbers since discovering the first stoat, but he added the department does have concerns for the little spotted kiwi.

“Kapiti Island is one of our earliest nature reserves and there’s a huge amount at stake so we’re very serious about keeping it predator free,” he said.

Since Kapiti Island became pest free after decades of eradication work it became a safe haven for many endangered and rare species of birds.

A colony of rare native bats has been discovered beside the Kepler Track, becoming just the second known colony of long-tailed bats in Fiordland. Rangers from DOC made the discovery in mid-December after the detection of bats on automatic recorders. Long and short-tailed bats are New Zealand’s only remaining land mammals and are now ranked as nationally critical and nationally endangered respectively.

It was a white Christmas at Pukaha Mount Bruce with the surprise hatching of a second rare white kiwi at the national wildlife centre. The chick hatched in the centre’s kiwi nursery, where Manukura, the world’s first white kiwi hatched in May, creating global headlines. “We were gob-smacked really,” centre manager Kathy Houkamau said. “While every kiwi is precious, to have a second white chick is a delightful gift, especially at this time of year. We thought Christmas had come early in May when Manukura arrived but now it’s come twice.”

It took 61 days of human ingenuity to catch a male runaway mouse on pest-free Moturua Island, in the eastern Bay of Islands. Trappers found mouse tracks in one of the tracking tunnels in October last year and DOC’s pest incursion response team immediately swung into action. But after 60 days without luck DOC’s Bay of Islands biodiversity assets programme manager Adrian Walker said staff were getting anxious. “We couldn’t lure any mice into our traps, even with grapes, cheese and chocolate. Mice normally have home ranges of about 50m², but Walker said this mouse roamed over at least 500m², at least a quarter of the island. Rodent tracking dogs, DOC rangers and volunteers with specialised rodent catching skills finally caught the mouse at the mouth of a Second World War water pipe in Army Bay.

Starting from this January one of Otago’s largest ever campaigns to eradicate wilding pines will be carried out in 1500ha of pastoral and conservation land surrounding the Roaring Meg area. The initiative is spearheaded by the Wakatipu Wilding Conifer Control Group (WCG), and builds on recent successes at other locations such as Queenstown Hill, Bowen Peak and Skippers Canyon.