Words of wisdom from those who’ve tested the TA

Eric is one of the early Te Araroa enthusiasts from abroad. Over 95 days during October 2003 until April 2004, this keen American trod 2600km from Cape Reinga to Bluff. He tented 22 nights and bagged 45 huts. His average distance walked was 28km a day. (On tramping tracks he only walked 15km a day, but on flat roads he managed to clock up a whopping 40km.)

On several occasions he met up with Geoff Chapple, including tramping over the Harper Pass section together.

Back then, the TA was incomplete, and Eric created his own adventurous detours to various watering holes. Off the trail, lots of time was spent updating his website, which is a proverbial minefield of interesting and helpful advice for future walkers.

With the trail officially open, Eric plans to re-walk it, but this time he intends to keep to the official tracks.

Eric shares his favourite and not so favourite memories:

In the summer of 2010, there were a dozen walkers attempting the trail but Jonathan and his young bride were surely the most unique.

As the old idiom goes, ‘if you fail to plan, you plan to fail’. On an expedition of this length, pre-trip organisation is as essential as physical conditioning. “We trained with warm-up tramps and mid-week swimming sessions,” Jonathan explains. He also found the TA website helpful and says that blogging by early through-walkers was invaluable.

He also says it’s impossible to control all eventualities: “There are plenty of factors you cannot foresee: weather, sickness, fatigue, and the longer the walk, the more the odds are stacked against you. So having a flexible itinerary is essential.”

The couple spent 80 days on foot from Ship Cove to Bluff – “enough time to be weaned away from civilisation.” And to get really well acquainted, we imagine.

Our honeymooners tallied six hours’ walking each day, and factored in rest days to wait out the weather, or recover. Food parcels were mailed ahead to strategic, far-flung destinations such as Glenthorne and Mesopotamia stations. However, they drastically underestimated how much food was needed and disciplined rationing was necessary.

North Canterbury was to be the bane of their journey. “You lose the cover of beech forest for the questionable pleasure of man-high tussock, speargrass and matagouri, on routes instead of tracks,” says Jonathan.

Being avid Tolkein fans, the couple looked forward to finding Mt Sunday beside the Rangitata River. In Peter Jackson’s trilogy of Lord of the Rings, Mt Sunday was Rohan, capital of Edoras.

To compensate for the inevitable boring bits, the Bains did detours that added spice to their journey. “If you have an idea for a variation from the pathway, go for it!,” says Jonathan. “It’s better to take ownership of the whole thing and get inspired, rather than be shackled by a single route south.” 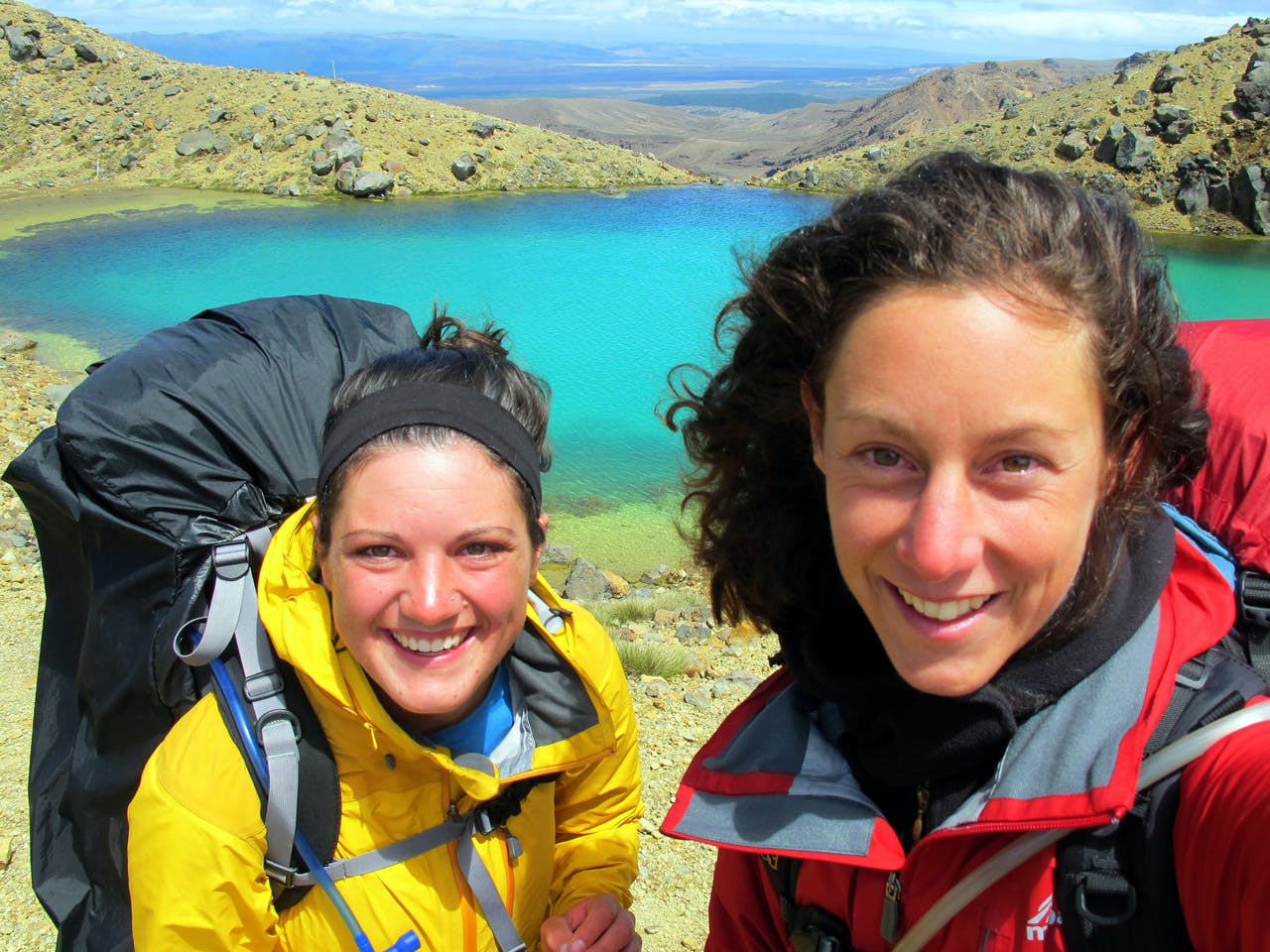 Alex has described herself as a traveller for the last four years. Before that she was an HR executive in England. She admits that she wasn’t fit enough for the rigours of Te Araroa. “I flew to New Zealand from Australia where I had been working and living in a van as a beach bum,” she says. “We did a five-day trek on the Hillary Trail (in Auckland), which was our only training and which almost killed me.”

The young English lass was determined to do something really challenging; something she would never have dreamed of doing a few years earlier. She wanted to push herself and see New Zealand in the only way New Zealand should be seen – on foot.

Alex teamed up with Shalane Hopkins, a Canadian who she had just met. Together, they contacted various companies who would hold their food drops. The couple departed Cape Reinga in October 2010. It would be April 2011 when their journey finally ended.

After three days on Ninety Mile Beach, Alex wondered if she would ever finish the trail. A badly-fitting backpack and early foot injury had her regretting she hadn’t tested her gear before departure. But she soldiered on.

The duo averaged eight hours each day of walking, taking three months to put the North Island behind them. Alex says her favourite gear was a Swazi fleece jumper and a new Macpac pack that she got for the South Island section. Once on the Mainland, they sped up noticeably, enjoying their progress and reaching Bluff in only two-and-a-half months.

When the Christchurch earthquake struck in February, Alex and Shalane took time off to assist with relief efforts.

Long expeditions tend to force adventurers to embrace simplicity and the basics of survival. It’s not surprising then that food rates highly in the writings of ultra-distance trampers. Ward’s and Hopkin’s favourite food was One Square Meal bars and Back Country Cuisine dehy meals.

Top Tip: Train, plan and then enjoy every second because you’ll miss it when it’s gone.

Alex and Shalane share their favourite and not so favourite memories:

Favourite NI section: Mangamukas
Favourite NI district: Northland
Favourite NI town: Puhoi
Most unpleasant NI part: Walking through Auckland and south until after Hamilton
Favourite SI section: Richmond Ranges
Favourite SI district: Canterbury
Favourite SI town: Hanmer Springs
Most unpleasant SI part: Maybe Bluff!
Most enjoyable tramping: Harper Pass – small, not too challenging, lush, green and gorgeous
Most challenging tramping: Waiau Pass in bad weather, exhilarating
Most fearsome ford: Ahuriri River was scary. We got half-way across. The speed of the water was so powerful. Linked together, our feet got swept away, so we retreated.
Best hut: Hunters Hut in the Richmond Ranges. The most dingy, run-down bivvy would be my best hut, depending on the day. Although the bigger huts were clean and a ‘home from home’, I did prefer the older, smaller huts – they had fires and more character.
Most isolated hut: Top Wairoa – no nice way out. Days from anywhere.
Best view: Mt Rintoul for the sheer amazement factor and the adrenalin 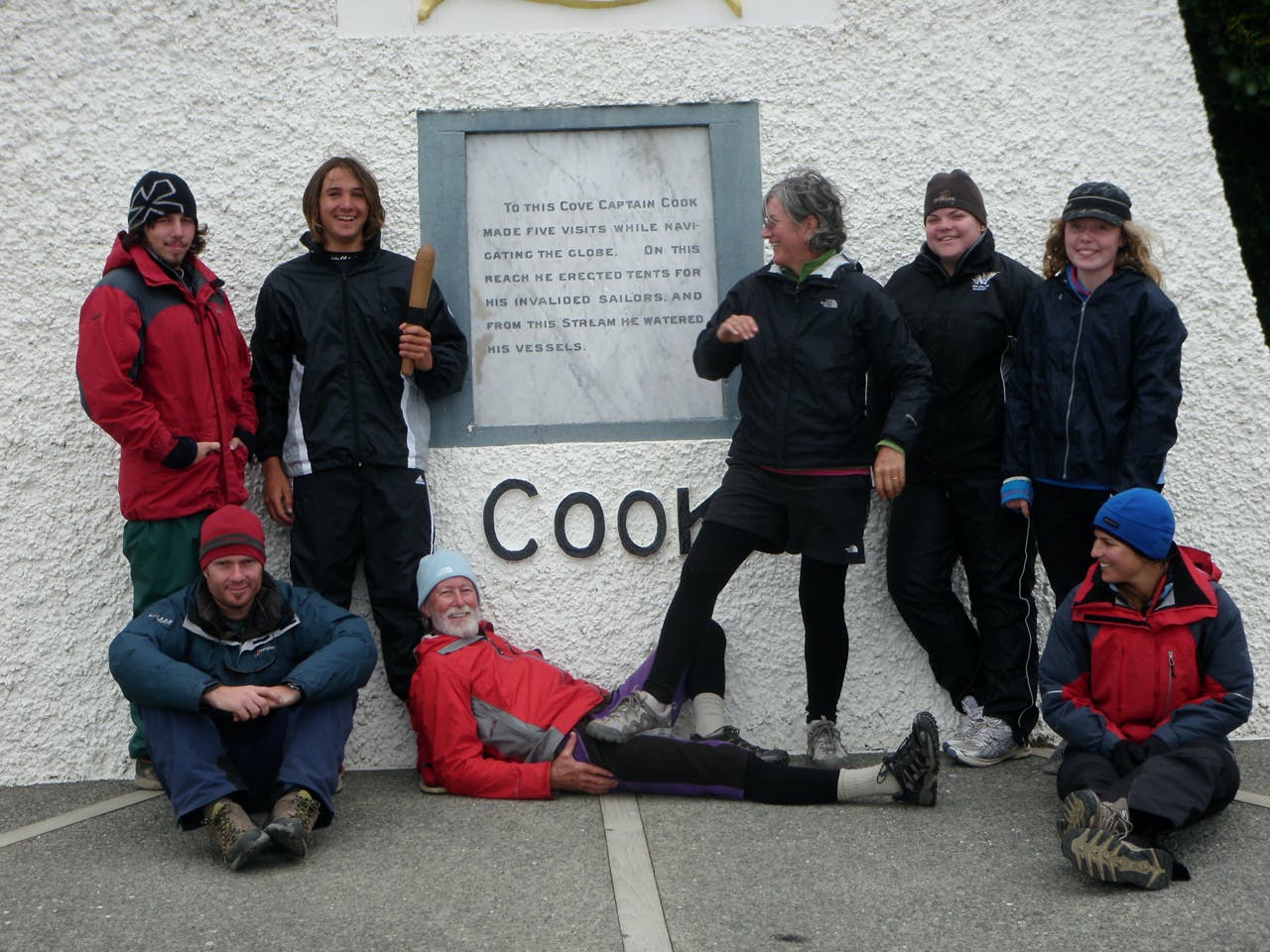 Graeme Dingle ranks as one of our most prolific adventurers and mountaineers.

He was the first to climb all the European North Faces in one season, and has been involved in numerous Himalayan expeditions. In the early 1990s, He spent two years circumnavigating the Arctic. In 1971 he and his friend Jill Tremain embarked on an epic traverse of the Southern Alps in winter. It was dangerous, daring, and was immortalised in the first of Dingle’s 10 books, Two Against The Alps.

At the end of 2009, he tackled the length of the South Island again, though this time in a more moderate fashion: on the Te Araroa Trail. His partner Joanne and 20 graduates from his FYD course joined him.

While Dingle’s group launched their expedition from Bluff, another group from FYD left from Cape Reinga, led by Jamie Fitzgerald. Each group was supported by a van and trailer carrying resupplies. The North Island team had the support team with them on most nights, while in the South Island, Dingle’s team was lucky to rendezvous with their van once a week.

It took Dingle’s team an impressive 60 days to walk form Bluff to Cook Strait – partly because mountain bikes were used on the boring road bits, or where flooded rivers forced a change in plans.

Even so, Dingle noticed the kid’s lack of fitness slowed progress – some of them were not prepared for the tough terrain. At journey’s end, after the party crossed Cook Strait on Lion NZ in a screaming sou’easter, Dingle had to cope with 20 violently ill kids.

Dingle admits to needing cortisone injections in his right hip as well as masses of anti-inflammatories to keep him going. He reflected that ‘the pain wasn’t helped by having to carry the kid’s packs when they were stuffed. I had a hip replacement a few months later – the head of the femur had virtually disintegrated.’

Top Tip: Go for it. Have a good time.

Graeme shares his favourite and not so favourite memories: