For some, tramping is about leaving the wilderness in better shape than they found it, which means tramping with a purpose.

Depending on who you talk to, it’s either applied tramping or tramping with a purpose, but there are probably other names for it. Good sorts tramping, maybe.

“It’s anything you do to help out,” says Janet Wilson from the Palmerston North Tramping and Mountaineering Club (PNTMC). Wilson is also with the Ruahine Whio Protection Trust and coined the term ‘applied tramping’ a couple of years ago to describe the trips she does in Ruahine Forest Park. Asked what constitutes applied tramping, she says: “Think, what can I do that’s not just tramping.”

Most people who practise applied tramping are building up a sweat. And they’re going back, time and again, to the same place. They might be chopping down wilding pines, renovating a hut, or re-baiting hundreds of DOC200 traps on a monthly basis. If you spent time removing treefall over the track, rather than just climbing over it, then you’ve done it yourself. (Note, wiping down the hut’s bench doesn’t count; you should do that anyway.)

“It’s tougher than doing normal tramping,” says Wilson, who does applied tramping while checking trap lines along the Pohangina and Oroua rivers. “You’re bending over to check traps with an overnight pack on. It is more strenuous and slower.”

She says a normal tramp to Iron Gate Hut, for example, along the Oroua River, takes about three hours. But by checking and re-baiting the 70 DOC200 traps on the way, it adds at least an hour, often two. But she has it down to a fine art. “I probably spend a minute at each trap. But if it’s got a dead rat, you have to clean it, and if it’s been there a while it might take a bit longer.”

Ruahine Forest Park is a hub for applied tramping. There are hundreds of trap lines scattered around the tops and in the river valleys. They’re there to protect, primarily, native blue duck/whio populations from predation by rats, possums and stoats. Wilson and many other members from PNTMC monitor 100 self-resetting A24 Goodnature traps in the Pohangina as well as 620 single- and double-set DOC200 traps scattered through the Oroua River and on the Whanahuia and Ngamoko ranges. They’ve been at it a long time and are growing their trap line every year. An extra 70 Goodnature traps are due to be placed in the Pohangina by May this year. 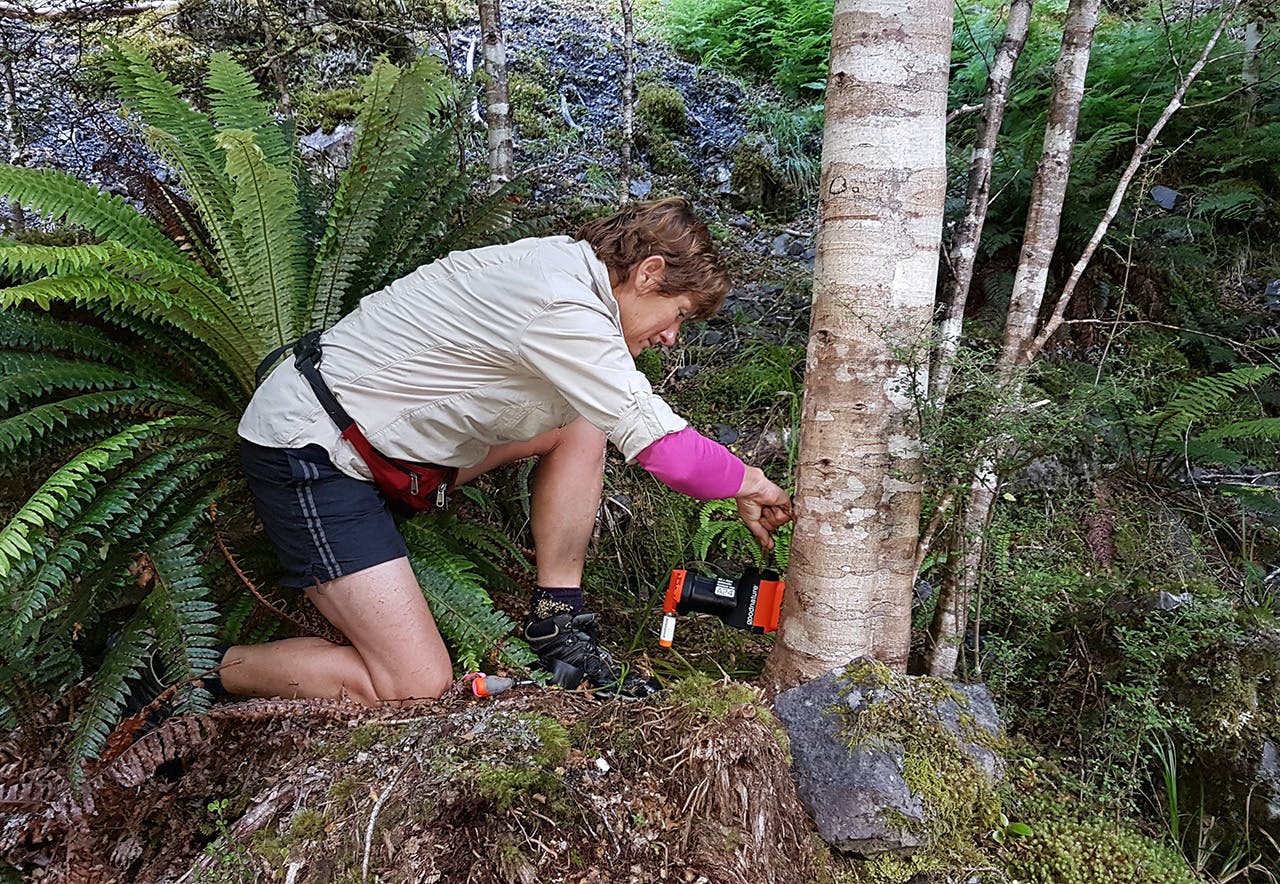 Janet Wilson coined the term ‘applied tramping’ to describe the trap-checking tramps she does in the Ruahines. Photo: Supplied

Further to the north, DOC has put in a line of traps from Aranga Junction to Parks Peak Hut, and down to Upper Makaroro Hut where it continues to the tops via Totara Spur. It’s known as the Aranga Junction line, and for the last two years has been looked after by the distant Wellington Tramping and Mountaineering Club (WTMC), which aims to check on it at least once a month.

The Wellingtonians don’t call it applied tramping, though. They prefer ‘tramping with a purpose’.

“It’s the idea that you’re tramping, you’re out there having a good time, but as a side effect of that, you’re doing something that at the end of the trip you think ‘hey, we’ve made a difference on this trip’,” says Amanda Wells, who coordinates the club’s trips from Wellington to the Ruahines each month.

Wells says there is a hardcore group who check the traps regularly, and she’s done it six times herself. But every third month or so the club runs a training session where anyone can come along and learn how to safely reset the DOC200 traps. On those trips, up to 12 people pile into the club’s van. Other times, it’s mostly anywhere from one to four people. It takes two people a weekend to check the 120-trap line. One person can do it in three days.

“The really good thing about our line is that because there are several huts on it we can tailor the trip to people’s fitness,” says Wells. On the first night, they’ll stay at the roadside Sentry Box Hut, then move up to either Parks Peak Hut or Upper Makaroro Hut the next day.

And even though checking the trapline means repeat visits to the same area, Wells says it’s not in the least bit boring tramping over the same ground every month.

“We thought it might be boring to keep going back to the same place all the time because as trampers we’re always seeking out new places to go,” she says. “But we’ve found that’s not been the experience at all. Repeatedly going somewhere has been a really interesting experience because we see how it changes over time.

“Also, I think those of us who are quite heavily involved in it feel a really strong sense of connection to the place, to the work we are doing and to the idea that we are leaving the backcountry a better place than we found it.” 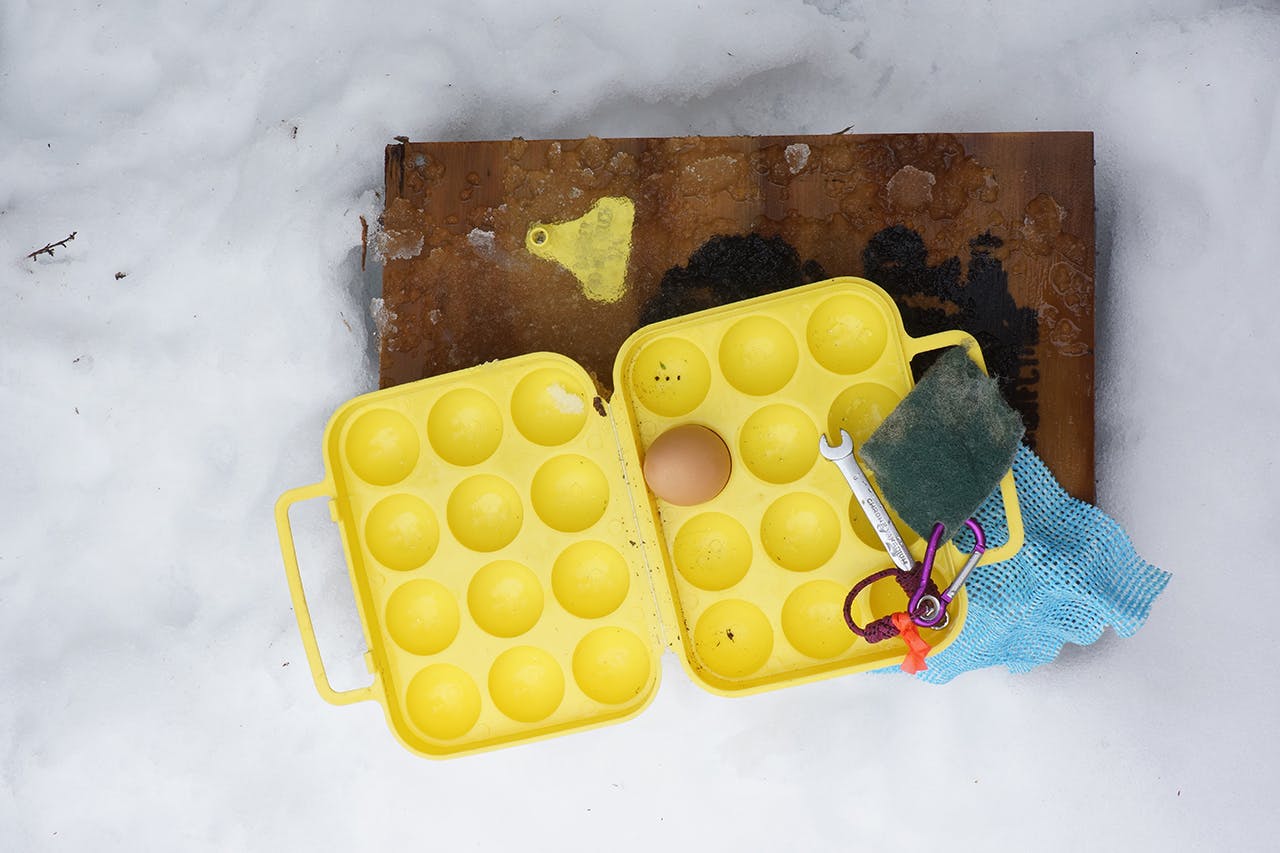 Wells says that connection is illustrated by the regular sighting of a particular whio near Upper Makaroro Hut which you might see in the river or, if you’re quiet, hear flying overhead around dusk. She also enjoys encounters with friendly tomtits which reveal themselves on the way up Totara Spur.

Even Wilson, who has lived in Pohangina for 30 years and tramped to every hut but one in the Ruahines (she’s yet to bag Rockslide Bivouac – marked ‘bivouac’ on the map, north and east of Rockslide Hut), says her seven years of trapping has created a strong connection to the ranges. “It gives you a sense of ownership, a sense of connection, a sense you’re doing something good for the place,” she says.

And it is doing good. In the last three-and-a-half years, the PNTMC has caught 305 stoats in the DOC200 traps. The Goodnature traps have also killed a few, but because kills fall to the ground where they quickly decompose, it is difficult to tally the number. Many more rats are caught: in the year ending June 2016, 357 were killed. If it weren’t for applied trampers, whio wouldn’t stand a chance.

There are certain tools of the trade necessary for anyone wanting to give applied tramping a go. For some, it will be a folding saw or secateurs to help recut a track or cut down wilding pines. But for the tramping Wilson and Wells do, the tools are particular to checking traps; an 8mm spanner is all Wilson really needs – it’ll open the old-style DOC200 traps on her lines. You also need bait to reset the traps. The PNTMC has secured a sponsorship deal with Zeagolds for free eggs. Wilson has been known to carry as many as 100 on her own, but typically 72 is the maximum a person can carry. “That’s the worst bit,” says Wilson. “Sometimes they break, even though we carry them in a special box.”

Another good bait is dried rabbit, but at 50c a piece this is expensive. “When we raise money, we buy some dried rabbit to use on the more distant traps,” says Wilson. 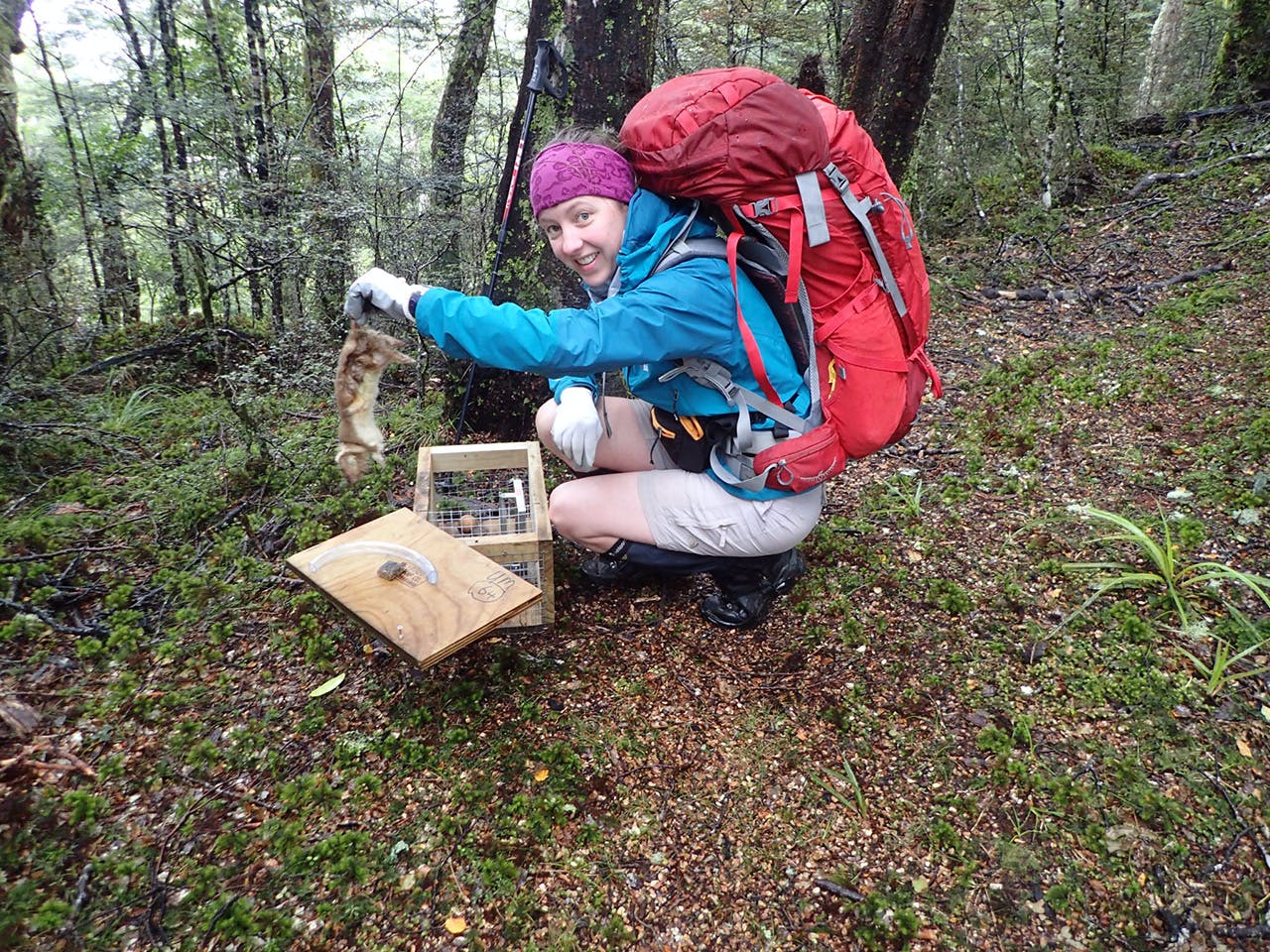 The WTMC members have invested in bumbags in which they carry all their tools. “The advantage of a bumbag, even though they are not really fashionable, is that you can wear them with a pack,” explains Wells.

Inside each bumbag is a square-head screwdriver to open the newer DOC200 traps, gardening gloves (to wear while checking the traps), hand sanitiser, a wire brush to clean the traps, a piece of hose which is used to set off the traps before putting a hand in them, and a rabbit meat paste bait. They also contain a waterproof notebook and pencil to record the data from the trap checks.

Wells is well versed in how to check a trap: “Open up the trap – 80, 90 per cent of the time there is nothing in it and it’s still primed – stick in your hose, set it off, freshen the bait, reset the trap, shut the lid, screw it down, and off you go to the next one.

“We might get three or four stoats every check.”

Anyone can tramp with a purpose. If you know how to check a DOC200 trap, then Wells and Wilson are only too happy for you to do it for them. Just make sure you re-bait it and let them know which traps you’ve done. But be warned, once you’ve started, you’ll never tramp the same again.

“If I see traps, I look at them with interest,” says Wells. “But I don’t take the equipment when I go tramping in other places. But I do find – and it’s part of the tramping club ethos – that we will carry out rubbish that we find, pick treefall off tracks, do simple things that don’t take much effort but are part of that whole idea around making it a better place, not just passing through leaving no trace, but passing through and removing negative impacts.”