Known as ‘The Bird Lady’, Sylvia Durrant has been nursing sick and injured birds for three decades.

Cat bites, concussions and broken legs: these are just a few of the ailments that wounded birds are being treated for in a small, cozy house on Auckland’s North Shore.

For 30 years, Sylvia Durrant has been caring for the sick and injured birds of Auckland. Now at 83, she’s lively and energetic. She has to be; she sees 4000 birds a year at her bird sanctuary in Rothesay Bay.

Durrant’s knack for healing birds stems from her training as a nurse; she used to care for disabled children at the Wilson Home.

“A lot of what I learned as a nurse – giving injections, fixing bones – caring for birds was just a carry-on.” After working at the Wilson Home, she became a district nurse, caring for disabled adults. She met her husband through her work, and shortly after they married, she began taking on rescue birds in their home.

When she first started, there were several others in Auckland who also cared for birds; that’s how she learned much of what she knows.

“If a bird came, I’d ring them up and say ‘hey, I’ve got this bird, and I don’t even know what it is!’ But then I would know for the next time.” She also devoured books about birds, and slowly built up a knowledge base that has made her one of the leading experts on bird rescuing in the country.

“Bird skeletons are a lot like ours, surprisingly. They have all the same joints that we have – their fingers are their long feathers at the end of their wings. Even their internal organs are much like ours. And, their bones get fixed the same way.”

Now, she’s one of just two bird rescuers in the city – the other bird lady, Lyn Macdonald, lives in Green Bay. That means Durrant sees a lot of birds. Spring is the busy season, but even when Wilderness visited her in late winter, she had a flock of different species being nursed back to health: two kereru, a kingfisher, a parakeet, a harrier hawk, two ducks and a whole gaggle of ducklings.

Durrant has a pet dog, Missy, who is an attentive assistant. She’s a border collie, and has been trained to care for the birds as if they were her puppies. Missy even cleans the birds, offering them slobbery baths whenever given the opportunity. 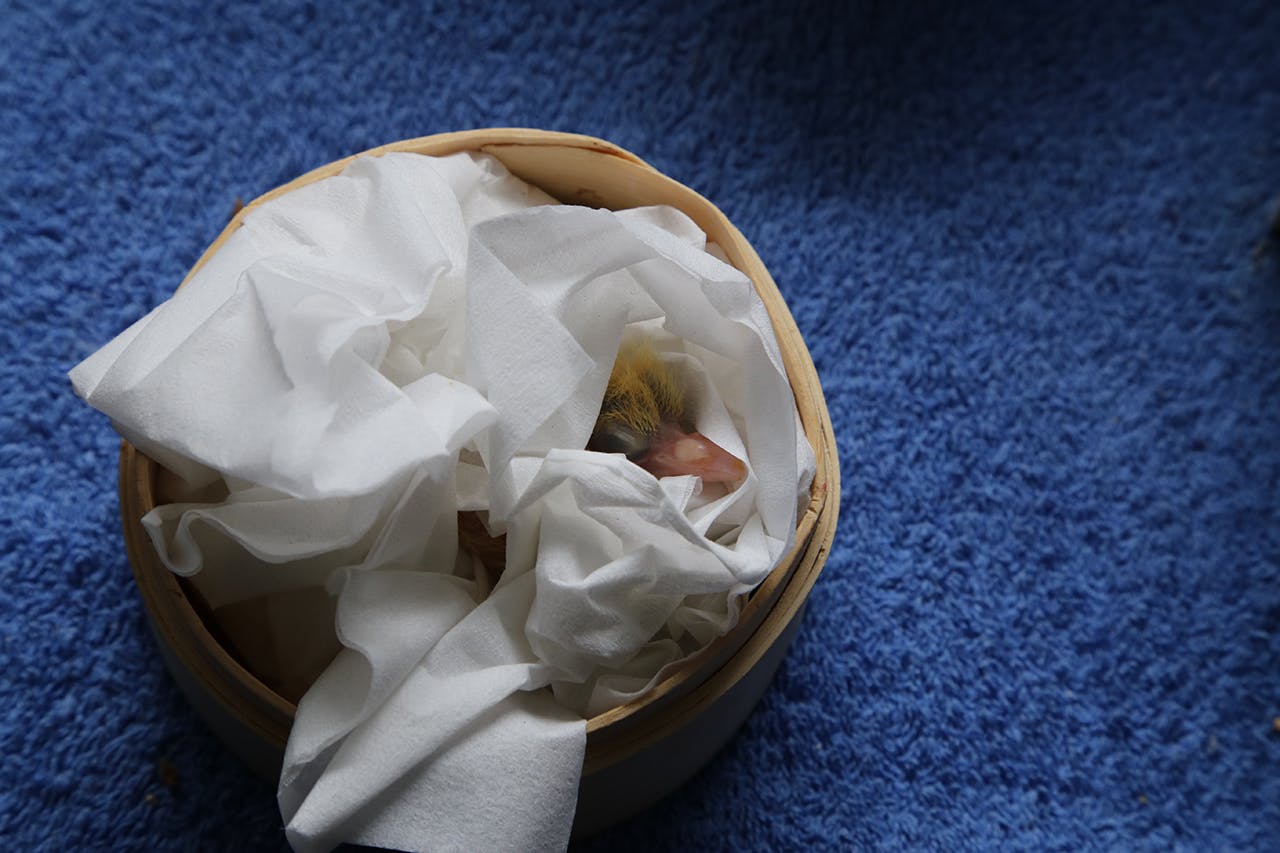 There’s a steady flow of volunteers that come to Durrant’s house to help out. When she has a full house, there’s almost always someone who helps feed the birds, clean the cages, and handle new arrivals.

The birds come to her on a daily basis. In the hour that Wilderness spent with her, two different sets of ducklings were brought in by people who live in Auckland. And every once in a while, birds come to her from surprising places.

Once, Durrant got a phone call from a fishing boat that was en route to Auckland. They’d picked up a yellow-crested penguin that had hopped on board the ship when they were bringing fish in. The penguin was in the middle of a moult.

“When a penguin is moulting, he’s all raggedy-shaggedy and isn’t waterproof. So they kept him on board until they got to Auckland.” Durrant hand-fed the penguin a steady supply of fish until all his feathers came in, and then she sent him on the fishing boat when it went back down south again.

More common are the pigeons, sparrows, and even blue penguins that fill her aviaries on a regular basis. The most common injury, Durrant says, are cat-inflicted wounds. After that, it’s injuries from birds flying into windows.

Over the years, she’s become an expert at mending broken wings and puncture wounds. One of Durrant’s ducks has a cast made from masking tape; she uses aloe vera to heal the injured harrier hawk.

She’s a natural with all birds, but of course, she has a favourite.

“Penguins,” she says, not missing a beat. “They’re neat. Especially if you get a baby one, you’ll have it for several months. And I get to take them swimming with the dog.” When Durrant has penguins, she takes them down to Campbell’s Bay for a swim in the rock pools. With Missy as their protector, the penguins always attract a crowd, she says. It’s a long-standing practice; before Durrant, there was another bird rescuer who started the ritual. It’s such a popular spectacle that Auckland Council plans to erect a penguin statue and commemorative plaque at the beach to honour the ongoing tradition.

While Durrant has an extensive community of volunteers, she doesn’t have a successor. There aren’t too many people who can do what she does; DOC, SPCA and all the local vets rely on her when they have a bird that needs saving.

“There’ll be a need for someone new when I’m gone,” Durrant says. “People often say to me, ‘who is going to do it if you can’t?’ But, you’ve got to have the time and the facilities.”

Durrant, who relies on donations from the public to keep going, has been recognised several times for her efforts, including the Queen’s Service Medal in 2007.

If you want to help care for the birds, contact Durrant at (09) 478 8819. Or, if you come across a sick or injured bird, drop it by her rescue centre, Bird Care, at 13 Montgomery Avenue in Rothesay Bay.