Inspired by the cacophony of bird song enjoyed by Captain James Cook, a Banks Peninsula man is hoping to bring back the dawn chorus

What do an ancient Spanish castle and Captain Cook have in common? On the surface, not a lot. But for Akaroa-based entrepreneur Grant Ryan, the castle and the captain were the inspiration for a device that has the potential to transform pest control in New Zealand.

The self-confessed “tech guy” is the founder and driving force behind The Cacophony Project, a collaborative project that’s using computer software and the cloud to change how bird and pest populations are monitored.

The Spanish connection comes from a sabbatical Ryan took in late 2015. Sitting within view of a thousand-year-old castle, Ryan had something of a revelation.

“I was looking out at this castle and thinking that we’re never going to have a castle from the 11th century in New Zealand,” he says. “But what we did have in the 11th century was this unique corner of the world with no mammals killing our birds.

“I was also inspired by hearing the story about Captain Cook getting off the boat and hearing a cacophony of birdsong,” Ryan continues. “When you go to some of the bird sanctuaries you literally hear a cacophony. It’s a beautiful sound, and it’s also an indicator of the relative health of the native bird population.”

Upon his return to New Zealand, Ryan set out to do some trapping in his own backyard on Banks Peninsula. “I realised how manual the whole process is,” he says. “As an inventor and a tech guy, I started thinking that if we could measure the local birdlife, then we could work out the best trapping method.”

Together with friend and software developer Dave Lane, Ryan started on the first phase of the project: creating a device that would measure the volume of birdsong within a given geographical area. The end result was the Cacophonometer – a solar powered micro-computer with a built-in microphone.

“The Cacophonometer records sound and uploads it to the cloud via a data connection,” explains Ryan. “We just want to start recording everything to get a baseline.”

There are already a number of recording devices scattered around the New Zealand bush, but Ryan and Lane decided to go one step further and add features to their device that would allow further analysis.

“We want to make sure the devices don’t just record sound; but that they can record images and videos and potentially even weather data,” Ryan explains. 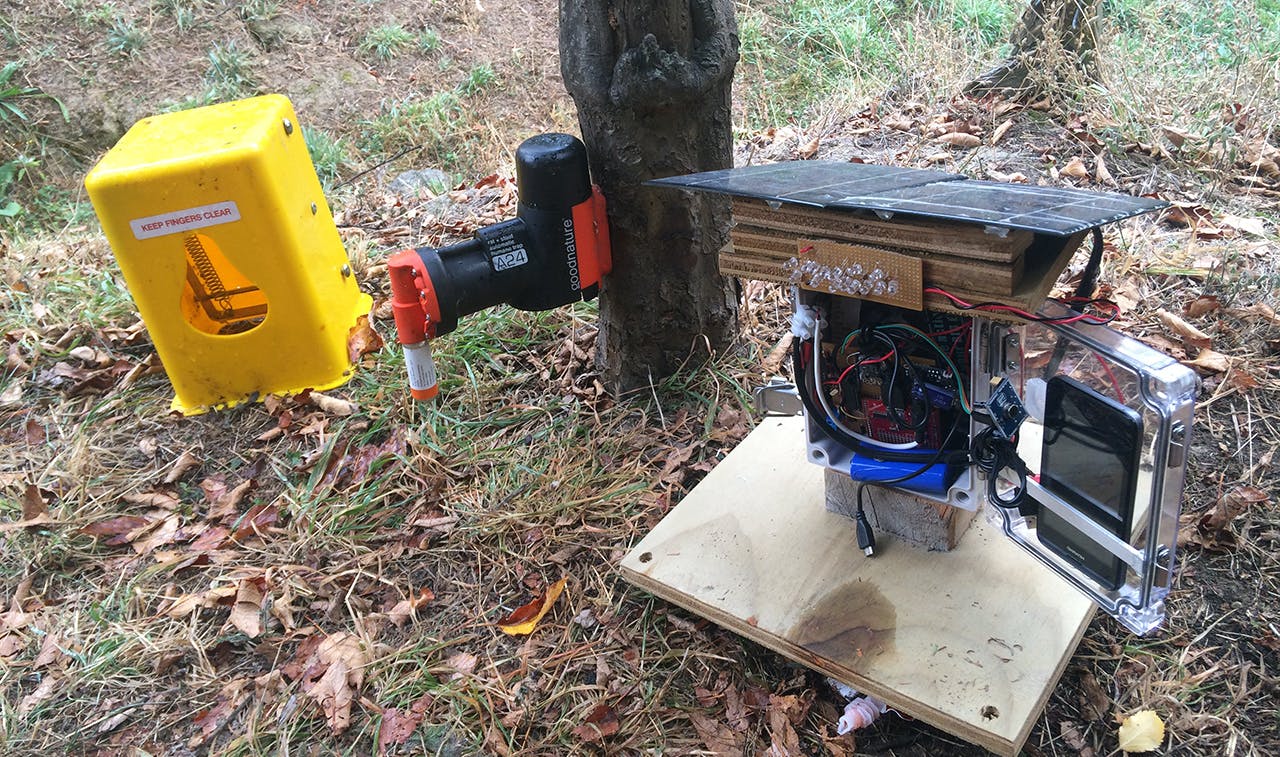 The solar-powered cacophonometer will measure the dawn chorus and could act as a lure to predators. Photo: Supplied

“One of the most compelling aspects of this project is the ability to collect information out in the bush, get it back to a central point and then analyse it en masse,” explains Lane. “We can start doing things like looking at what the weather conditions were like. Does the dawn chorus rise or fall when it’s raining? How do unseasonably hot or cold temperatures affect the birdsong? It means we can adjust our measurements of the chorus for seasonal variations. We can also look at things like recording whether a nearby trap has sprung or if it’s managed to capture anything.”

The development of the Cacophonometer got even more complex when Ryan and Lane began to add pest control into the mix, the idea being to use sound as a lure. “Most lures have to be re-baited every few weeks,” says Ryan. “Sound and video can be solar powered, they can last for years and they can act over a longer distance.”

That’s good news for native birds, and less so for predators. “There’s potential for us to automate the way we get rid of pests,” explains Ryan. “The idea is that we’ll have this intelligent network, sitting out there listening, and all of a sudden it picks up that there’s a possum nearby. Then the audio lure starts and it’s basically going ‘possum, come and get it’.”

The audio lure could be a simple beep, emitted at just the right frequency to tempt an inquisitive possum to take a look. The lure would lead it straight into a possum trap.

Ryan and Lane are still very much in the development phase.

“Our goal is to get a device that is reliable and working well,” Ryan says. “Once we’ve done that, we’ll get a few devices out there so people can buy them and get some data going in. Ideally we’ll get some trap manufacturers using it so they can automate when the traps go off and make the trapping more effective.”

All that techno-wizardry sounds like it should be a closely guarded secret – but it’s not. Ryan and Lane decided early on that The Cacophony Project was an ideal candidate for open source and have made the code behind the software freely available for anyone to tinker with.

That way, “anyone with knowledge or interest related to the project can make a useful contribution”, says Lane.

Adds Ryan: “It started as just a device to measure sound. Now it’s potentially a device that can make us pest free. Everyone can chip in and do something as part of it.”