An iwi and polytech in Nelson are collaborating on research into the deadly native nettle ongaonga, which might hold secrets to new drugs

Eric Buenz’s daughter is teething right now – so he jokes, perhaps a little wearily, that the powerful ongaonga he’s studying might help her pain and her parent’s sleep if he rubbed a bit on her gums.

It’s science black humour – ongaonga, or Urtica ferox (from the Latin ‘to burn’ and ‘fierce’), is a remarkably poisonous plant, one of the deadliest in New Zealand, and one of a handful of plants in the world that have been responsible for killing someone just by coming into contact with them. It’s made an entry in the Guinness Book of Records as the Most Dangerous Stinger.

Touching the spines causes intense pain – they contain histamine, serotonin and the neurotransmitter acetylcholine, and multiple stings can cause inflammation, rashes, and itching. High levels of exposure can cause paralysis, convulsions, blurry vision and death. In fact, the toxin from just five spines is enough to kill a guinea pig, and dogs and horses have developed neurological problems after contact.

Ongaonga is common throughout the North Island and on the West Coast of the South Island, in scrubland and along forest margins, where it can grow into dense thickets, and form a tree up to 3m tall. It’s killed at least one person, a hunter who, in the 1960s, blundered into a patch in the bush. Within a few hours, he started having trouble walking and breathing, and then lost his sight. He died five hours later in hospital. Another man died after skinny-dipping in a river and was stung before he was able to dress. So you don’t really want to muck around with ongaonga.

Buenz even felt the numbing attacking his fingers after handling a little of it in preparation for his upcoming research: he and Nelson iwi Wakatu Inc are collaborating on a study into ongaonga, examining how it might be used in new pain medicines.

Buenz is a former Mayo Clinic ethnobotanist and now research professor of applied industries at the Nelson Marlborough Institute of Technology. Wakatu were unfortunately unable to comment for this story, but Buenz says the drug-discovery collaboration with iwi is unusual for New Zealand, and he’s gaining a lot of pleasure from working together.

“Having that cultural interplay adds to the richness of the project,” he says. “It’s not just a bunch of people working the lab; it’s actually helping this family build something and capitalise on their resources.”

Traditionally, Maori used more than 200 native plants medicinally, and ongaonga was one of them. They used its bark and the leaves of kawakawa, boiled together, to make a liquid used internally and externally to treat eczema and venereal disease. A decoction of ongaonga leaves and young twigs treated pains, stomach ache and gonorrhea. In Maori folklore, Kupe used ongaonga to create obstacles to hinder the pursuit of the wives he’d stolen, and it was used to protect coastlines and dwellings. 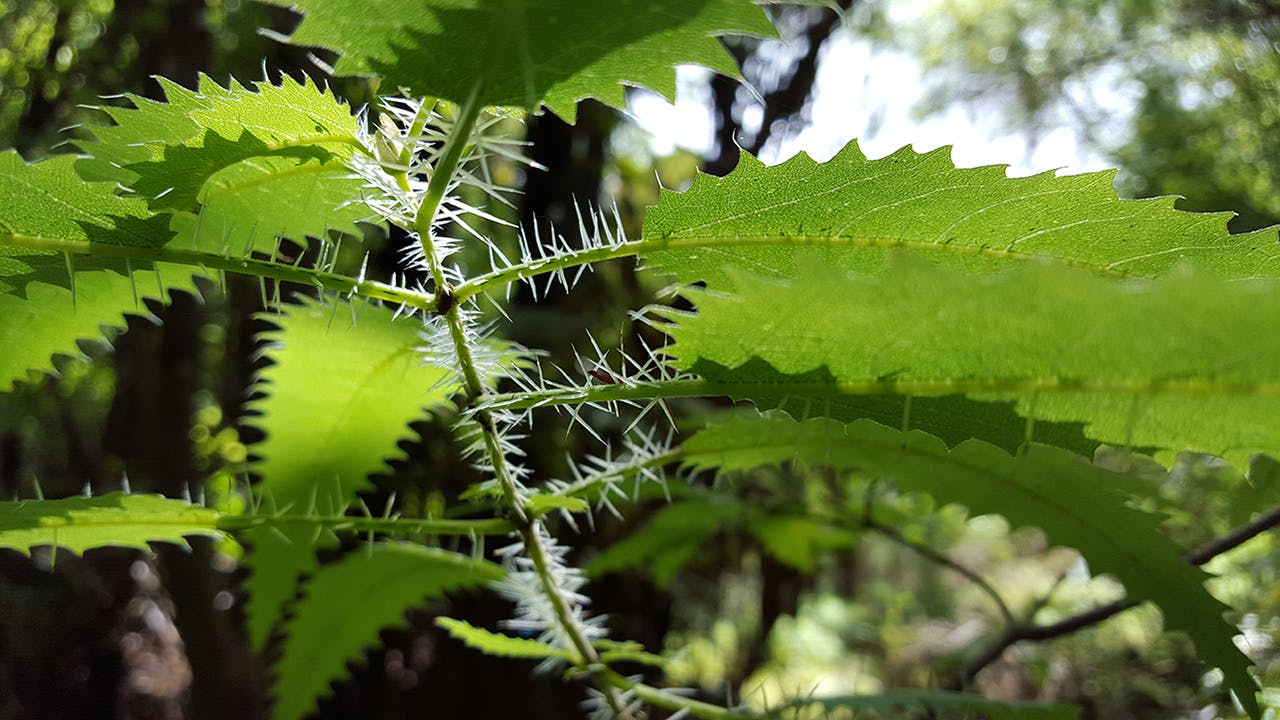 Ongaonga has killed at least one person and is common throughout the North Island and on the West Coast of the South Island. Photo: Supplied

University of Otago researchers have experimented with the plant, making an ongaonga extract and injecting it into the sciatic nerve of rats. “They saw it was neurotoxic,” he says.

For a plant to cause an itch is “pretty easy”, but for it to affect the nervous system is another story entirely.

“When you think of your skin, it’s one of the best barriers ever created,” he says. “It keeps all things out, it does a great job of maintaining homeostasis with things like humidity, and it’s flexible. So when you rub this extract on your skin, somehow something is being transported into the nerve and then along the nerve back to where it causes its action. That’s pretty cool – there aren’t many examples of that.”

Rabies, however, is one. “It hijacks the normal cellular transportation mechanism for its own evil purposes,” Buenz says.

He envisages that the painful properties of ongaonga could be stripped out, and researchers could instead harness the nerve transportation compound so people can rub a medication on the skin rather than injecting it or taking a pill.

A good use might be for people suffering neuropathy, he says, a painful condition that causes numbness and weakness, the most common being diabetic neuropathy.

“Neuropathy is unfortunately common and there are really no good therapeutics today,” he says. “Somewhere around a third of all diabetics will ultimately end up with neuropathy, usually in the foot – a painful, stinging, numbing sensation.

“Something like this drug could potentially work in that you rub it on your foot and you don’t feel pain anymore, which would be massive. So endemic New Zealand flora could potentially hold a new treatment for nerve damage and diabetes.”

Buenz is also working with Dr Gareth Parry, professor emeritus at The University of Minnesota and research professor at NMIT. He compares ongaonga with another plant toxin, capsaicin from the capsicum pepper plant, which also binds to skin nerve endings and can be effective in reducing chronic pain in patients with diabetic and other neuropathies. “Experience suggests that the ongaonga toxin is more potent than capsicum and has the potential to be more effective as a treatment for chronic neuropathic pain,” he says.

But there hasn’t been a lot of research done on the drug potential of New Zealand native plants, Buenz says.

“What’s been studied is pretty small relative to what you would have expected for an area of such high endemicity,” he says. “Some work has been done, and it’s been promising.”

They have a Department of Conservation permit to collect ongaonga for three years on DOC land, and DOC has also approved them to send the work to Buenz’s old workplace, the Mayo Clinic, if they can’t get grant funds in New Zealand. NMIT creative industries tutor Klaasz Breukel and freelance documentary maker John Irwin are also working on a documentary about the medicinal properties of ongaonga.

It might also be the start of something new, something bigger than just one plant: Buenz and Wakatu are also investigating beginning something here that would be similar to Australia’s Nature Bank, which is a collection of more than 63,000 samples of plants and marine invertebrates from tropical Queensland, Tasmania, China, Malaysia and Papua New Guinea. Samples are available in a ‘library’ for researchers looking for new drugs.

“Australia arguably doesn’t have the same high level of endemicity as New Zealand, but no one’s done a project like Nature Bank here yet,” Buenz says. “There’s a lot of opportunity.”