DOC is increasing the daily limit of helicopter landings from 14 to 80 on the Ngapunatoru Plateau at the head of Tutoko Valley in Fiordland National Park. It’s a development which is worrying some in the tramping community.

The plateau borders the Pembroke Wilderness Area and is accessible only by helicopter or via an arduous journey in from the Hollyford Track and Glacier Creek. It’s a popular alpine climbing area of the Darran Mountains, and is also an area where heli-operators provide glacier trips for tourists.

According to DOC, the rising tide of tourists in New Zealand means the department has to look at ways of allowing more access to popular destinations. The Ministry of Business, Innovation and Employment estimates that 3.3 million people will visit New Zealand next year. Marie Long, director of planning and permission for DOC, said it “can’t turn a blind eye” to the added pressure for more tourism opportunities, which she says is coming largely from Chinese tourists.

“How do we cater for that and still be reflective of national park plans? It’s a difficult place to be,” Long said.

DOC’s solution is to allow for more landings each day – on a trial basis. For the next year, It will be collaborating with all interested parties – recreation groups, the aviation sector, and land management/conservation boards – to monitor the impact of the increase. Long said DOC may do aircraft noise assessments if it can find the right tool to use in such a remote environment.

Christine Pounsford of Te Anau is a member of the Fiordland Tramping Club and is “appalled” at the proposal. “It affects climbers significantly, but also trampers or others using the [Tutoko] valley are just as harrassed by either overhead helicopter activity or landings,” she said. “It’s one of the few places you can count on to be able to access backcountry wilderness with a real sense of connection with the surroundings and nature.

“It’s good revenue for the helicopter operators, but a big sacrifice for the rest of us for nil return.”

There are currently eight helicopter companies with concessions to land on Ngapunatoru Plateau. The rate for a glacier visit from Milford Helicopters is $375 per person. Owner Jeff Shanks says his current limit of two landings a day in the busy season is not enough. “There’s a big demand for it nowadays,” Shanks said, adding that he’s never heard any complaints from the climbing community in that area. He points out that some of the climbers are also his clients, who rely on helicopters not only for access, but also for peace of mind from a safety perspective.

Jaz Morris has taken helicopters for climbing trips in the past and says he values the access they provide, but he’s also experienced first-hand how disturbing they can be after a hard climb. He scaled Tutoko in October 2011, and opted to get there by foot. After two days of “hard” tramping, he and his friends climbed the South Face of Mt Tutoko. Morris said the tranquility of the remote summit was swiftly broken by a helicopter landing on the ice plateau just below his perch on Tutoko.

“The presence of climbers, hunters and trampers does not detract from the experience of others in the hills,” Morris said. “But the presence of helicopters does.”
He said rather than boost the number of helicopter landings each day, he’d like to see DOC better funded in order to avoid the pressure for tourism dollars.

“DOC needs to be better funded by central Government in order to reduce the tendency for cash-strapped managers to jump at any extra concession dollar they see that might make it easier for them to maintain their vital conservation and recreation services.”

However, Chris Roberts from the Tourism Industry Association said there’s a growing recognition of Ngapunatoru Plateau as one of the highlights of New Zealand. He said the noise concern is blown out of proportion and commended DOC for increasing the limit: “DOC does end up in the firing line, but it does a good job trying to balance conservation and tourism.

“It’s part of [DOC’s] mandate to encourage New Zealanders and visitors to experience the outdoors. They balance it all up and try to find a middle ground.” 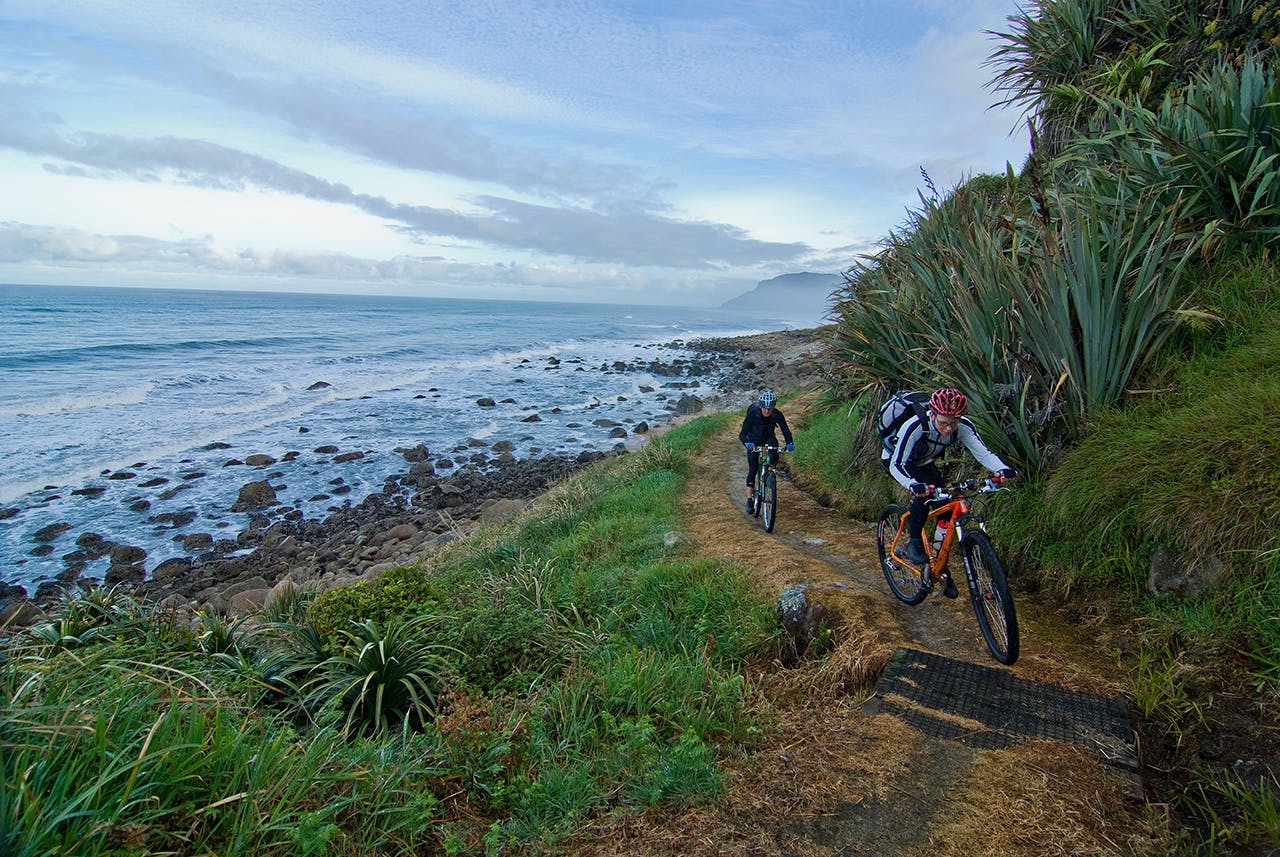 An extension to the mountain biking season on the Heathy is being proposed. Photo: Dave Mitchell

The mountain biking season on one of the Great Walks could be extended by an extra three months.

DOC is asking for public input on their proposal to increase the biking season on the 78km Heaphy Track from its current duration of five months to eight months. The season now runs from May 1 to September 30, but the proposed season would span April 1 to November 30, excluding the four days of Easter.

DOC said the motivation behind the proposal is to promote use of the track and to give mountain bikers more opportunities to ride outside of the winter months.
“The current mountain biking season is mostly in winter when cold weather, including snow, can make riding the track more difficult,” said DOC Golden Bay operations manager Andrew Lamason. “Most mountain bikers are choosing to ride it in May and September and numbers on the track rise considerably in those two months.”

Former Golden Bay Tramping Club president John Pemberton said he supports the proposal because it means more opportunities for young people to enjoy the outdoors. However, he recognised the inevitable concerns of some trampers. “No one likes being spooked by a bike coming up behind them. [I] hope cyclists will opt for restraint, and trampers good hearing and tolerance.”

DOC will do a partial review of the Kahurangi National Park Management Plan to look at how the change would impact the park.

Written submissions on the proposed extension to the mountain biking season can be emailed to Heaphy@doc.govt.nz or posted to Kahurangi Plan Amendment, Department of Conservation, Private Bag 4715, Christchurch 8140. 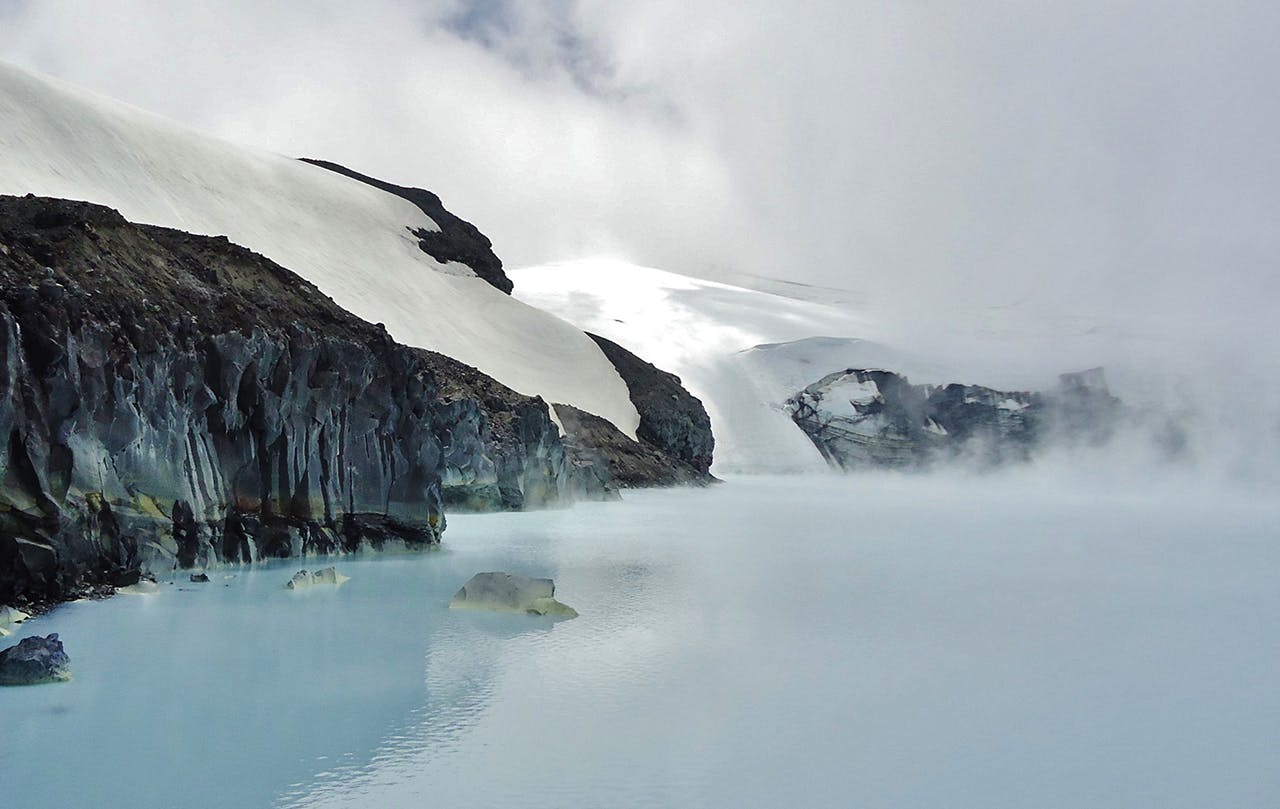 Mt Ruapehu is teetering near an eruption, triggering a warning to trampers and climbers not to venture near the summit.

GeoNet has raised the alert level to ‘2’ after increased activity over the past month. According to DOC volcanologist Harry Keys, there are three components involved: Crater Lake has warmed to 45 degrees, there’s been a swarm of earthquakes, and just yesterday, they measured increased levels of gas.

GeoNet’s alert system spans from a benign 0 (no volcanic unrest) to a 5, which is a major volcanic eruption. Level 2 means ‘moderate to heightened volcanic unrest’, with Level 3 indicating a minor eruption.

Keys said Ruapehu is a very unpredictable volcano, because its magma resides quite close to the surface, about 1km deep (compare that to Auckland’s volcanoes, which he said are about 50km deep). “So, you don’t have much time if it decides to do something, or if the systems becomes unstable,” Keys said.

The data from Ruapehu implies an increased chance of activity, but an eruption is not a given, Keys added.

DOC has issued warnings to trampers to avoid the ‘Summit Hazard Zone’, the area within 2km of the centre of Crater Lake, and all peaks in the summit area.

The last time Ruapheu erupted was in 2007, before the current alert system was developed. Since the new system started in 2014, this is the highest alert level Ruapehu has reached. 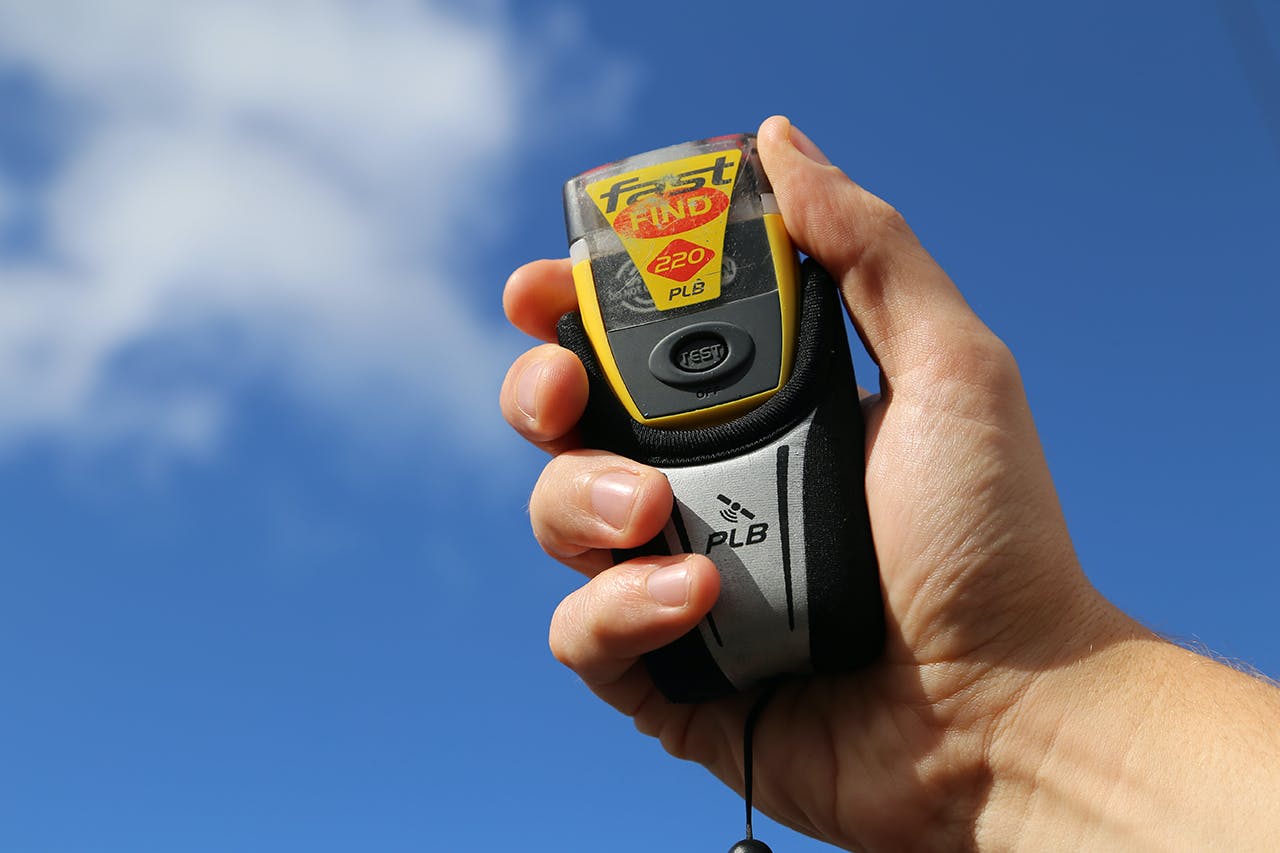 A solo tramper avoided a potentially long and life-threatening night in the bush when a new search and rescue satellite system picked up his PLB signal just four minutes after activation.

The new system had only been operating in test-mode for three days when 53-year-old Wellington man Don Stevens fell 40m near Girdlestone, on the Wairarapa side of the Tararuas, breaking his leg in two places and with bones poking through the skin.

“The extra time created by receiving the signal faster was invaluable, and potentially lifesaving,” said Mike Hill from the Rescue Coordination Centre in Wellington. “It meant we could get the search operation underway earlier, and that made all the difference with the limited daylight hours that are available at this time of year.” MEOSAR uses a new generation of 18 satellites which orbit about 20,000km above the Earth, replacing the current low-Earth orbit (LEOSAR) satellites, which orbit at 800-1000km above Earth. Not only does the new system mean beacon signals can be received more quickly, it also allows for greater accuracy when locating an activated beacon. The LEOSAR satellites will be phased out over the next four years.

Stevens was rescued by Amalgamated Helicopters of Carterton, ‘at the end of usable daylight,’ according to Maritime New Zealand.

Dart Track to reopen in November 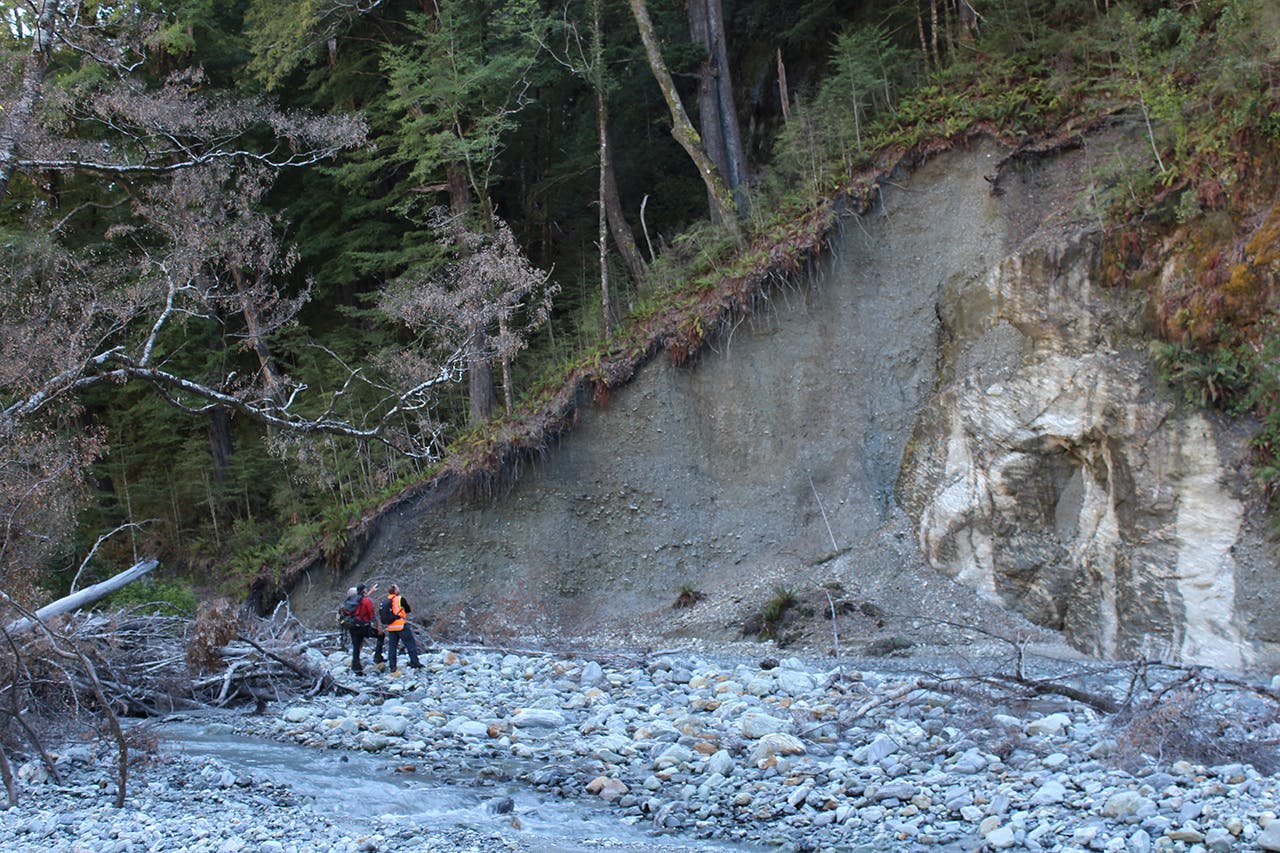 A section of the eroded track at Sandy Flat. Photo: DOC

DOC has announced its plan to reopen the Dart Track later this year. The popular track has been closed since January 2015 after heavy rain caused a large slip and lake at Sandy Flat. The trail should be fully open by November, allowing trampers to once again complete the full Rees-Dart circuit.

The landslide at Slip Stream has posed numerous issues for DOC, which has been monitoring the erosion for the past year. DOC’s operations manager Geoff Owen said after the slip, the river environment was “particularly volatile” due to heavy rainfall. Now that the land has had time to settle, work can begin to rehabilitate the walking trails.

DOC will begin work on the track at the end of winter, and will create a 4.4km stretch of new trail. The route will be further from the river in order to ensure a more permanent and stable path.

The new section will likely appeal to trampers wanting to avoid Great Walk-style trails. Owen said the new track will “passively flow with the natural landscape with minimal structures and rock blasting”.

“The closure of the Dart Track section has had significant implications for the destination as a whole and has left a number of important assets under-utilised,” Owen said. “Our priority is getting people back out there.”

Trampers are advised to contact Queenstown or Wanaka DOC Visitor Centres for the latest information.

5 Things we learnt this month…

You really don’t want to tangle with the ongaonga nettle

The New Zealand backcountry is perfect-built for packrafting

Patching a hole in your down jacket is really easy

It’s not the size of the avalanche, it’s where you end up that’s the killer