Read more from the
October 2020 Issue

Read more from the
October 2020 Issue

Beset by anxiety, Michelle Green felt her life was spiralling out of control. But then she found tramping and the Te Araroa Trail.

There it was again: that unbridled sense of fear. It had followed me, a constant companion through every single one of the 1600km I’d hiked so far. It was ever at my back, a shadowy presence that chased me down the trail and often caught me.

I could hardly move from my seated perch at the top of the staircase. I looked down towards almost certain doom at the foot of the hill below. There, cars whizzed along the highway, oblivious to my predicament which was unfolding 140m above on the Paekakariki Escarpment Track. Out of the corner of my eye, I spied the first of the two swingbridges I would have to cross. I was paralysed, stuck fast in the knowledge that my preferred exit (turning around and heading back the way I had come) would not be any less petrifying.

It wasn’t the first time I’d stared fear in the face since embarking on Te Araroa. Through 80 days and 1700km, I was forced to face my worst nightmares: fears of tumbling down scree slopes, being attacked in my tent at night, solo camping, getting lost, suffering debilitating panic attacks, contracting hypothermia, having a heart attack, or developing an allergic reaction to a bee sting.

But as I sat here, seemingly on the edge of the world, once again staring into the face of that same fear, for the first time I realised I’d pushed through it all. I’d met fear head on every time, and I’d kept going anyway. Because I had to.

I’ve been calling it by this new name – ‘fear’ – for some time now, but for many years it was simply known to me as anxiety. Like a silent predator, it lay in wait just beyond the realm of my reality until it suddenly attacked. It controlled my stomach, bowels, tear ducts and brain, feeding on my insecurities and fears. A few years ago, I threw it a new bone: a severe case of Graves Disease, a thyroid condition which causes the heart to race and the body to function at a much faster pace than normal.

I’d spent many of the past eight years running from these demons, leaving me emotionally and physically exhausted, functioning at a level not much higher than a zombie, fearfully trudging through life desperate to outrun its next, inevitable, appearance.

Something needed to change.

Years of therapy had taught me I had no idea who I was as a person, or what made me tick. I searched for others with whom I had common experiences and I came across two women who used one particular form of therapy: hiking.

It was the perfect solution. On the outside, it would appear that I was embarking on a journey of self-discovery, whilst on the inside I could hold the same pattern, buying myself more time to run from my problems and my reality. I was nearly 30 years old, had only had one serious relationship, spent every day working a job I’d lost all love for and still lived under my parents’ roof.

Soon, I was making decisions purely because I wanted to get out of my comfort zone, and more often than not I made a beeline straight for the things that scared me.

Not one to do things by halves, I started researching the Pacific Crest Trail on the USA’s eastern seaboard. Soon enough, I realised I couldn’t jump straight into this venture without any preparation or prior tramping experience. Mindlessly Googling ‘long trails near me’, I never expected to find one on my doorstep.

To overcome the initial anxiety of committing to a long trail, I threw myself into preparation for a thru-hike of Te Araroa’s 3000km. Even though I leaned heavily on any excuse to bail out, the fear worsened as my start date neared. My dreams were haunted with visions of long drop toilets that took on human personalities and chased me through forests, and shadowy figures that scratched their way into my tent at night.

At Utea Park, the night before I was due to start the walk, I cried myself to sleep. I’d never felt so terrified, isolated or alone. But in those moments, I did something I’d never done before: I reasoned that even if I failed on the first day, I’d never forgive myself if I didn’t at least try.

I didn’t know it at the time, but the principle I established that night would guide me down the North Island on The Long Pathway. I’d set a new precedent for fearful situations: rather than run from them, I now saw them as opportunities for personal growth. 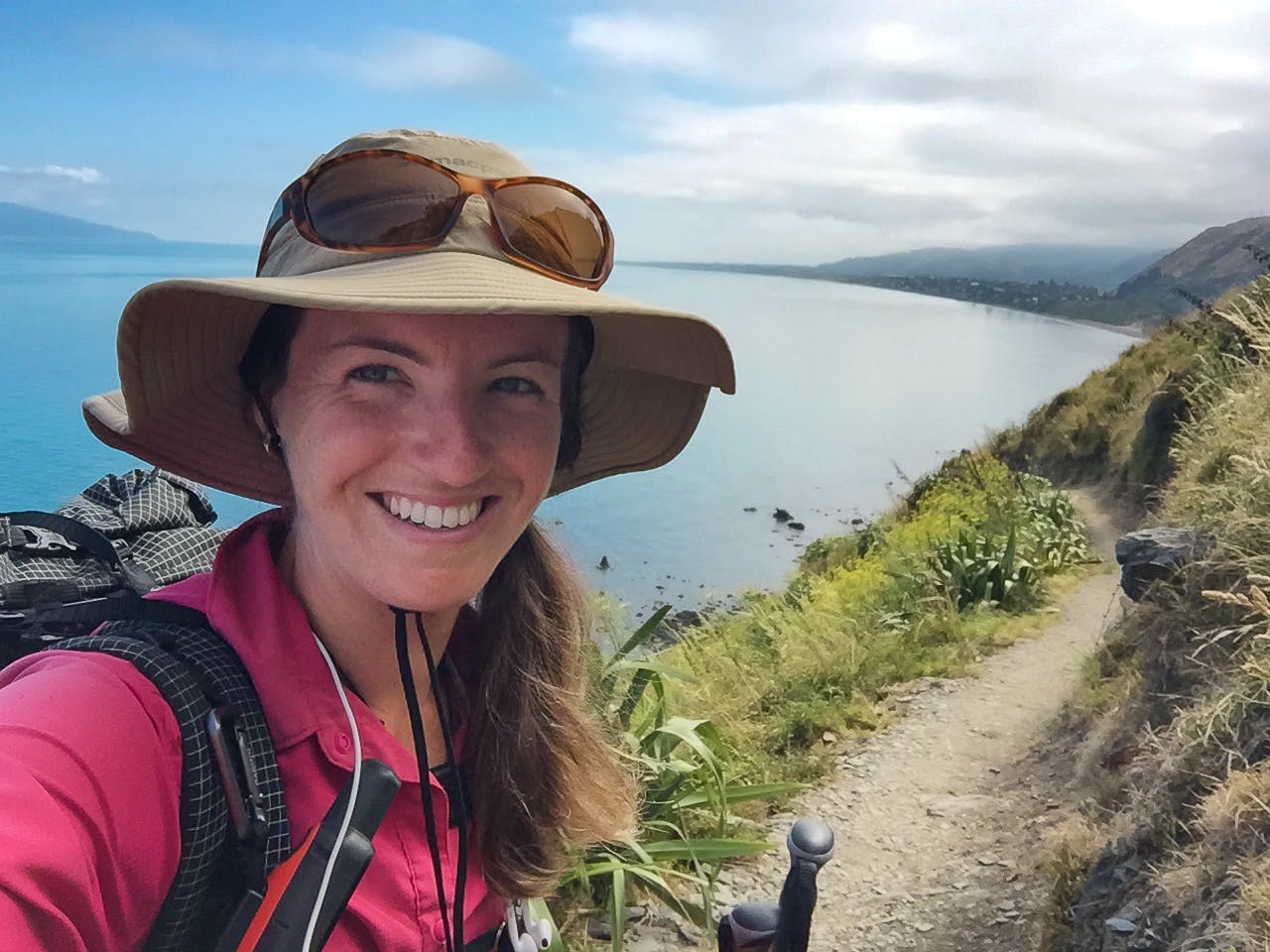 It was a novel way of looking at fear for me, and it developed subconsciously with each step I took. It wasn’t until weeks later that I realised that within my first week of being on the trail I’d already dealt with many of my initial fears such as getting lost, navigating rough and overgrown trails, camping in sketchy areas, showering and toileting in facilities far below my usual standards, sleeping side by side with strangers, and hiking through intense pain. Far too often to count, I was overcome by the desire to quit. But even when felt most strongly, like shortly after I’d nearly toppled down a hill on the Mangaokewa Reserve Track, or whilst I was running from the ricocheting sounds of gunfire on the Timber Trail, a larger sense of purpose and determination pushed me onwards.

Soon, I noticed I was making decisions purely because I wanted to get out of my comfort zone, and more often than not I made a beeline straight for the things that scared me. In Hamilton, I split from my hiking partner so I could throw myself into my fear of hiking solo. In the weeks that followed, I learned how to deal with the physical and emotional challenges of long-distance hiking without another person around to act as a sounding board.

There’s no doubt some of my worst days on trail occurred during this section. But I also learnt so much about myself and what I was capable of, which made them some of the best days too.

As I clambered down the hillside toward the first swingbridge on the Escarpment Track that day, cautiously placing each foot lest it skid out from under me, I reflected on how far I had come. The jolt of fear I’d experienced moments before had dissipated enough to move forward and for the first time, I realised the trail had never given me more than I could handle. The many ebbs and flows of my fear and anxiety through the 1600km I’d hiked were a source of constant empowerment, and at that moment I never felt stronger or more proud of myself for how far I’d come.

I’d found what I’d been searching for all along: freedom. On the trail, I had the freedom to live my life as I wanted to. Away from societal pressures and free of the obligations of family and friends, I found freedom in the basic needs of life. All I needed was contained in the pack strapped to my back. Each step I took and every action I performed was towards my new purpose: Bluff. Life was simple, clear and pure.

But my journey didn’t end in Bluff as I had hoped. I wouldn’t advise committing to an adventure like Te Araroa without ample time to financially prepare yourself. Now that I have returned to normal life, I find myself craving the simplicity and purity I found on the trail. Some refer to this feeling as post-trail blues: the black dog of the long-distance hiking community, a very real sense of hopelessness after returning from a life-changing adventure like Te Araroa.

I will return to the South Island next season, armed with the lessons I have learned from the North and empowered by the freedom I have gained. There are many sections that terrify me and I’m sure plenty more I don’t even suspect.

But one thing hasn’t changed: I will face those fears head on and try. Because I still have many trails to navigate on my way through fear and towards freedom.