Never before had I been so grateful for a roaring fire.

My nose was frozen, my hands numb, my body exhausted and my breath wheezing from cold-induced asthma.

Yet, for all that, I felt alive and invigorated.

I’d just entered the Luggate Hotel and felt like an out-of-towner, a city slicker who’d entered a wild south saloon. But no heads turned giving cold stares; instead an attractive young barmaid gave me a welcoming smile.

I ordered a dark ale, blue cod and fries and slumped down in front of a fire, sipped my beer and melted into the armchair.

The barmaid was amused; it was the middle of winter and few people ride from Wanaka to Luggate when it’s so cold. In the summer, however, she told me the hotel is usually full of cyclists.

While summer is the busy season, the ride from Wanaka to Albert Town via Beacon Point and along the Upper Clutha River Track to Luggate is more than worth it even in winter.

The colours of the winter landscape are breathtaking – the cold gem-like aqua of the Clutha, the warm red-orange of the trees and little shrubs with berries along its banks, the golden pasture land and the tender green. It was a wonderful combination of colour.

Even with thick low lying cloud squatting on the landscape, the scenery and the easy-riding track goaded me on to see what was around the next corner. 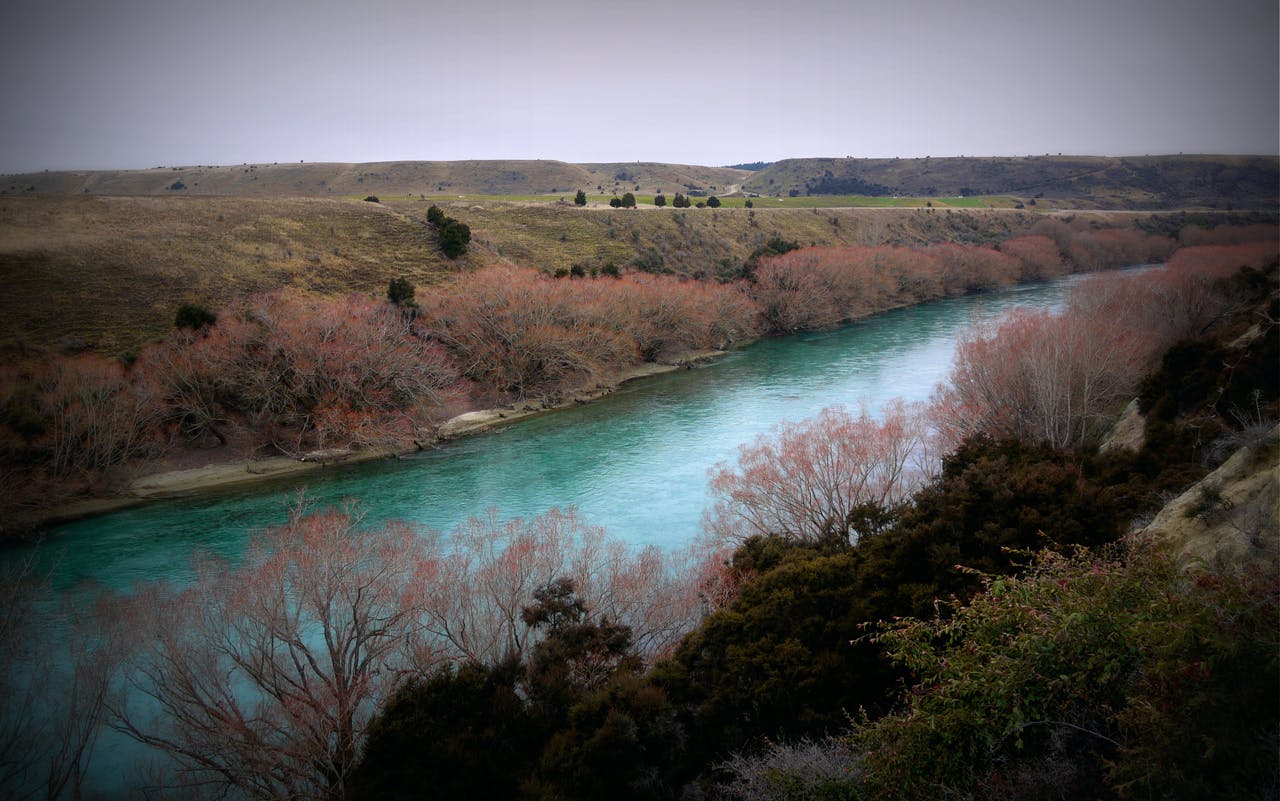 The trust also developed the  Wanaka-Glendhu Bay Track, the  Hawea River Track and has plans for other trails in the pipeline.

Kathmandu co-founder John Pawson, who died from a fall while climbing Mt Aspiring in 2008, started the trust in 2006 with a vision of developing a regional network of walking and cycling trails.

When current trust chair Tim Dennis first began working with Pawson, he couldn’t conceive how a handful of people could possibly fulfil the trust’s vision.

But Pawson’s can-do attitude showed Dennis and others what can be accomplished and since its founding the trust has raised close to $1m and built 37km of track with 12km more under construction and three swing bridges.

Dennis said the trust started because DOC and the Queenstown District Council (QDC) were struggling to find the capacity to develop tracks in the region.

“It wasn’t really part of their core business,” Dennis said. “So there was a need to have a community-based organisation that could just get on with it.”

“One of the beauties of the trust, unlike the council, is we can be a little bit more informal about how we go about our business.

“All we have to do is simply find a good idea, figure out how to do it, go get the money and then build it. We don’t need to go through an extensive public consultation processes.”

In saying that, DOC and the QDC have been the trust’s biggest supporters, providing land, guidance, assistance and funding.

The trust’s seven volunteer trustees do everything except physically build the track which it pays contractors to do. Because of its low overheads, virtually all funds are invested in the tracks.

Dennis said the trust plans to build tracks from Hawea to Makarora, from Luggate to Queensberry and from Glendhu Bay to Minaret Station and beyond. But, with the current economic climate, Dennis said it might be quite some time before the projects can be funded.

The trust is in the final stages of gaining funding to build a track on the Lake Hawea side of the Clutha River that will go from the Hawea Swingbridge to Luggate, creating what Dennis anticipates will become a popular loop trip.

Dennis hopes linking small communities by walking and cycle tracks can help to revitalise them and bring in much needed tourism dollars.

“It’s very early days for New Zealand and cycle tourism like this,” Dennis said. “A lot of other countries are decades down the track from us – in France there are tracks and trails just everywhere.

“It’s going to be a long term project because there’s so much other infrastructure that has to grow up next to [the tracks] in order to support [them]. There will be trails built, but there will be nowhere for people to stay, or no operators.

New Zealand might have a long way to go, but Dennis said it has huge potential, with many other areas of the country being open to the development of walking and cycle trails.

“When the National Government announced the National Cycle Trail concept a whole bunch of organisations similar to the [Upper Clutha Tracks Trust] came into being,” Dennis said. “A lot of communities have realised this could be the way to go.”