Antarctica tests all who go there, whether South Pole adventurers or scientists on the verge of new discoveries

Finally our journey stops. The roar of the engines and the metal tracks clattering on sea ice gives way to the sound of the wind. The door opens and we spill out into flurries of snow and a cold biting wind.

In single file we walk over the low hill to the Adelie penguin colony at Cape Royds in Antarctica. Just out of arm’s reach a lone skua holds stationery position and eyes us up before suddenly veering off in the strong wind. A pure white snow petrel comes in to take its place.

We scramble over the loose volcanic rubble to where the sea ice stops and the unbelievably black ocean starts. Penguins are lined up on the edge of the ice, taking forever to make the plunge. When one finally does, the rest follow in rapid succession. Some emperor penguins turn up as well, belly flopping out of the water. It’s amazing to be here and take in the wildness. Not just because it’s so difficult to get to, or untouched, but also because the weather is so utterly extreme. Surviving in Antarctica takes concentration and decent gear.

On the way back we get to walk around and through Shackleton’s historic hut that was built in 1908 as part of the Nimrod expedition. It’s like a journey back in time. There’s unopened jars of salt, tins of meat, ham loaf, cod roes, plums and apricots, and even an unopened block of LifeBouy Soap that, according to the package, is ‘for the preservation of health and the prevention of sickness’. There are candles by the dozen, an endless array of boots for the team and bridles for the horses that they brought to help pull their sleds.

Visiting Scott’s hut at Cape Evans is equally fascinating. Both places still feel alive with the presence of those who were part of Antarctica’s ‘Heroic Age’ of exploration. It’s as if they’ve only just left. Still lying on the bunks are their sleeping bags made of reindeer hides and coarse woollen balaclavas, while the shelves have the neatly stacked enamel mugs and plates they ate from.

At Scott’s hut, in the last stall of the stables, is the complete skeleton of a dog, its collar and chain still attached. For Scott, Oates, Evans, Wilson and Bowers, a similar fate awaited them on their expedition to the South Pole. Exactly 100 years ago, on January 17, 1912, they arrived only to find Amundsen’s team had beaten them there. 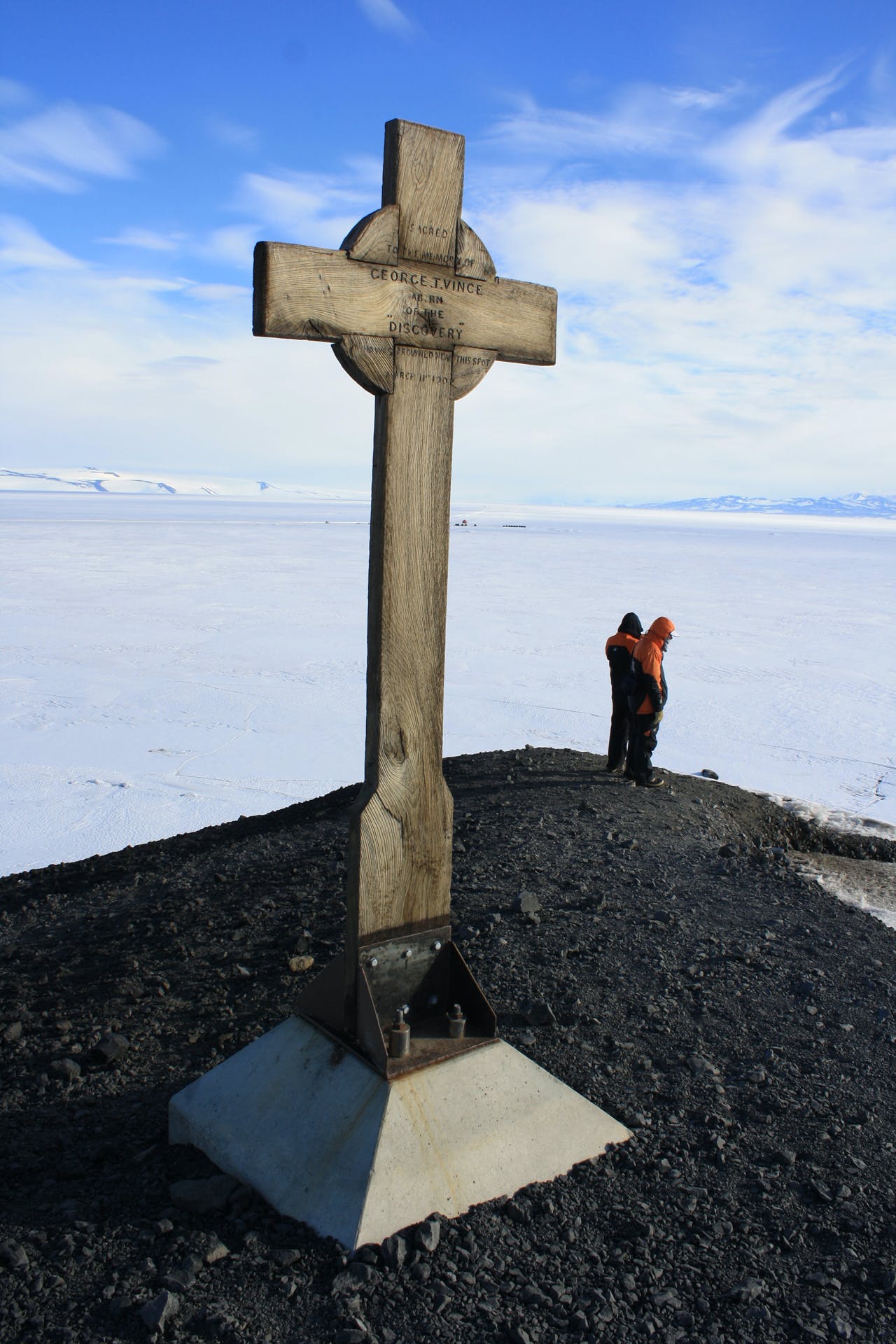 A season later, only 17.7km from a major food supply dump, Scott’s journals were found beside his frozen body. They told the story of how they progressively ran out of food, fuel and with it heat to make water. And despite their worsening predicament, it tells of how they took time out to investigate the geology of the area and to carry 16kg of rock samples to the very end.

The frozen Ross Sea area is a little different now. In summer it’s a hive of activity at both the large American McMurdo Base and New Zealand’s more modest Scott Base. At the base there’s a core group of 36 who in summer keep it operational through all weathers and conditions. Then come February, once the boat with the following year’s stores has been unloaded, the base is cleared to leave a skeleton crew of 14 to wait out the Antarctic winter.

But at this time of year the bulk of the inhabitants are scientists whose research brings them to the ice as they, a bit like Scott and Amundsen, seek the unknown. James Brundell and Peter McCabe, colleagues of mine from the University of Otago, came down to work on space weather monitoring and worldwide lightning location network. Gary Wilson is also here, drilling into the sandy rock beneath the Antarctic ice sheet to work out past climate, sea level and ice sheet history to help predict how this icy continent might behave in a future warmer world.

In many ways these researchers of today are not unlike explorers from before, as both seek to push into areas of the unknown world. That said, there are different degrees of discovery. On the way back from the ice we stepped off the Ross Ice Shelf and into the giant US military C17 airplane used to ferry people and supplies between Christchurch and the ice. With us in the cavernous cargo hold were a dozen or so emperor penguin chicks bound for Sea World in San Diego. One of the escorting team enthusiastically told me how these birds were going to permanently join the colony established there and, as well as being able to be seen by the public, they would be part of a research programme.

Perhaps it’s a bit like the rocks Scott collected; not everything we do will bear fruit. Yet that said, while the plane was taking me home, it seemed these penguins were involved in a journey that was heading in entirely the wrong direction.