The best skill isn’t how to cross a river, it’s knowing when not to cross

Looking at large rivers is mesmerising. The constantly-changing surface pattern occasionally interrupted by a breaking wave, while just below the surface the water relentlessly pushes itself down valley.

Looking at sizable rivers you need to get across is even more absorbing as you try your best to read the best line, where the current might be most forceful and where the footing is too uneven.

In fine weather, river crossings are generally straightforward – at some point there’s usually a weakness where it fans out to become shallow and slow enough. But with a bit of rain things can quickly change.

Recently I made my way up over Kellys Stream, near Arthur’s Pass, before crossing over to the Taipo River via Hunts Creek and the Dry Creek Tops. What started out as a lovely day ended with me holed up in Julia Hut in heavy nor’west rain.

Never mind. I was soon soaking in the nearby hot pool, checking out a pair of fantails swooping about on the other side of the gorge.

That night it bucketed down. The river came up quickly and flooded the hot pools. It didn’t matter – I dug a bigger hot pool higher up the bank before soaking away most of the day in it.

By evening the valley was in full flood. There was no prospect of heading over to the Wilberforce. Even the swingbridge was impossible to cross, as Mary Creek raged all around the bridge’s northern anchors.

Perfect weather returned the next day, but the rivers were still too flooded to carry on. So it wasn’t until after three nights at Julia Hut that, right on dawn, I could head away. Just as another nor’wester was kicking in.

On Whitehorn Pass the wind and the rain were raging again. Down in the valley the Cronin Stream was filling fast, forcing me to hug the west bank before I could pick up the last section of track that leads to the Canterbury Mountaineering Club’s Park Morpeth Hut.

I arrived utterly drenched and just in time to escape the really heavy downpours. Walls of water were hurled in waves against the hut and the noise, interspersed with the thunder, was phenomenal. The weather forecasters say around 400-500mm of rain fell in one 24-hour block. And for the next four nights I was marooned at the hut by raging rivers and successive fronts.

I spent the days walking the banks trying to read in the flow the best spots to cross. I tried to imagine what the footing behind this boulder or that would be like and also placed cairns on the river’s edge to measure how much it might be dropping. 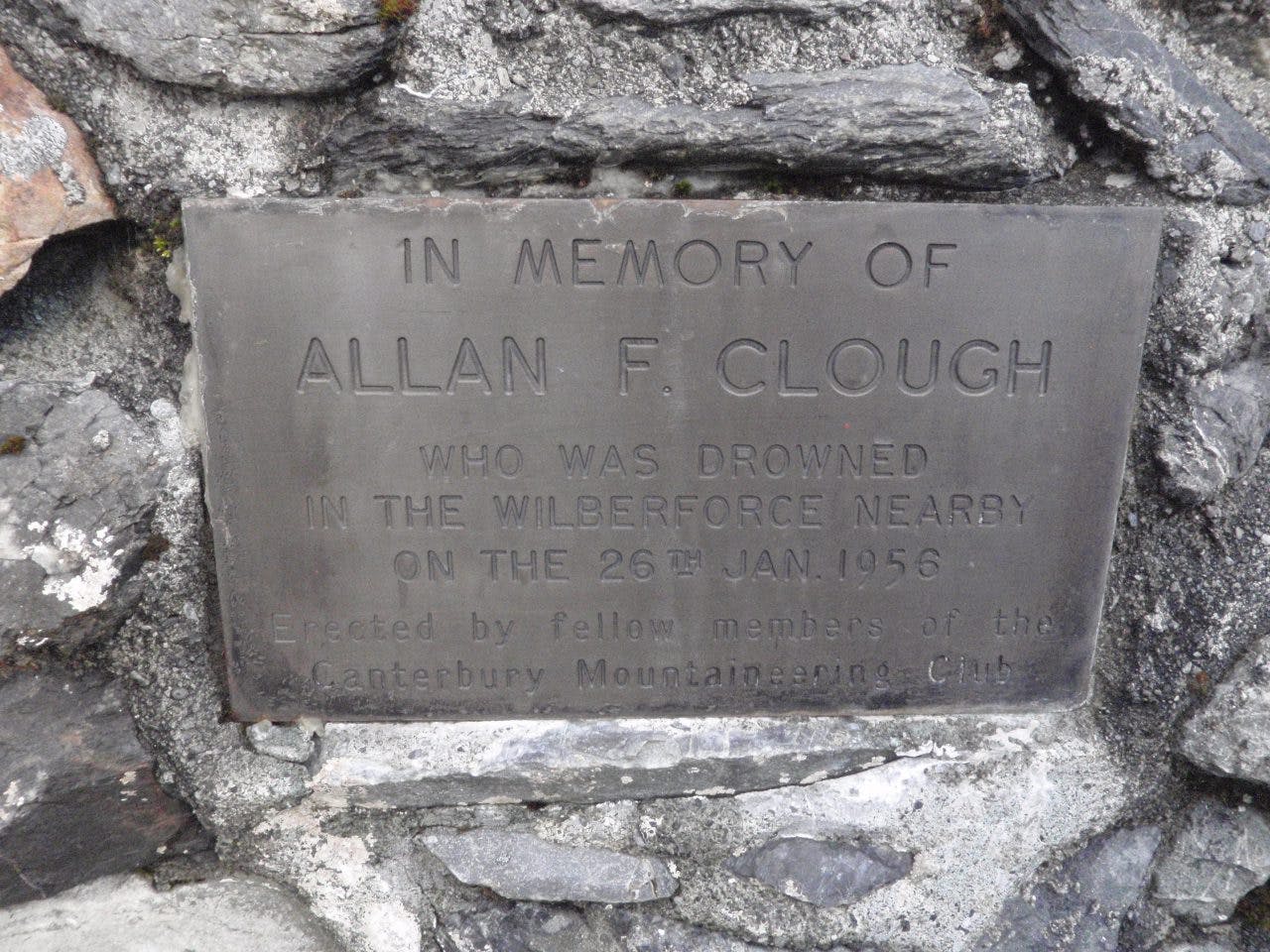 The Clough Memorial is a stark reminder of how dangerous alpine rivers can be. Photo: Mick Abbot

At night, between the heaviest downpours, there was the dull roar of the river. It sounded like a never-ending train thundering through the valley. The top notes came from waves of water being hurled downstream. But it’s the deeper rumbling that’s more unsettling. It’s the sound of rocks being smashed and bounced downstream at a speed that can’t be run.

Rivers in this country can be lethal. Drowning in them has long been known as the New Zealand disease. It’s sobering to realise that though it’s generally safe on the bank of a river, and easy to throw a stone to the other side, the gap between is only two steps to oblivion.

In such situations my thoughts turn to other challenging river crossings I’ve encountered – like one lonely section of the Landsborough, the murky glacial silt of the Rakaia headwaters, a small stretch of water between Fiordland’s Lake Cadman and the Cora Lynn Falls, and also a creek just north of Pompolana Hut one Milford winter. In each case there’s been no Zen-like sense of ‘being the river’. For me, the relationship is far more confrontational.

There’re all sorts of techniques for getting across, and also debates as to how best to buddy up and whether to keep your pack buckled. That said, it seems one of the key techniques is learning how not to cross a river.

My one rule, having decided – even momentarily – that a particular crossing is not a safe, is to never try and persuade myself otherwise. Once I’ve made that call it’s set in stone. I have to walk away.

After my second night at Park Morpeth I gave up on heading down the valley to Lake Coleridge. Crossing the Cronin or the Wilberforce was well beyond me. Instead I decided to retreat out to Hokitika by crossing over to the Arahura.

There had been a lull in the weather and the creek at the base of the pass had dropped quite a bit. That said, by the time I arrived the rain was picking up again and if I was to get across then it would have to be now. I was certainly keen – it’d been almost a week since I’d seen anyone, I had a bad case of cabin-fever and supplies were low.

In my mind’s eye I imagined the best route across. It seemed OK. However one spot by the far bank – only four or five paces wide – flowed fast and was gouged and the runoff downstream was a bouldery gorge. Something in my mind switched. It didn’t seem right.

That wasn’t to be the day I’d make it across to the Clough Memorial – in memory of Allan Clough who drowned there. Instead I returned to Park Morpeth Hut, which was built to encourage people to wait out the rivers and as a memorial to James Park and John Morpeth who also drowned in this valley.

It was a further two nights before I was able to return to the same spot, a little jittery, and this time make it across.