A trip through Kahurangi National Park demonstrates that to enjoy New Zealand’s wild places, you need to be prepared to fight for them

Kahurangi National Park is an amazing area to get lost in. Late in November I set off from the old store at Bainham and headed south around Boulder Lake, Adelaide Tarn, the Drunken Sailors, Cobb Valley and Balloon Tops before heading past Splugeons Rock and into the Karamea. Wrapped up in each of these places were some great experiences in a perpetually rainless journey.

However it’s the anticipation of the day in hand that keeps me moving, and on the evening of the seventh day I had made my way onto Wangapeka Saddle in readiness for a trip I’d long wanted to do – hike along the Matiri tops before heading down the valley itself on my way through to Murchison.

It was great to use the fire ring there and cook my meal over a small fire, before kipping down with just a fly sheet above me.

I woke early to the sound of birds all around me and just after dawn headed up the very direct track to the bushline. From the topo maps I thought the start would be straightforward, with the more challenging sections later on – but the reverse was the case. Straight away I found myself on a ridge too sharp for my liking and so had to back off and sidle just to the south before hauling my way up a steep scrubby step back onto the ridge proper. It unnerved me a little as I wondered if it would all be like this.

But it wasn’t. Instead it was a magical snake-like route across Nugget Peak’s leading ridge before roller coasting the undulating and slightly aerial ridgelines. One section had me sliding under the Dr Zeuss-like pineapple scrub, before heading back out onto the tops for the final haul into the Matiri Valley proper.

Just after lunch I came across a tarn shaped like a giant rata leaf. I ditched my pack to slide down the snowgrass to plunge in and cool down from the heat of the day. By the time I got to the final summit I was exhilarated. Around me was Kahurangi National Park – Mt Owen and the Patriach to the east, while directly to the west was the maze of cliffs and high meadows that make up the 1000 Acre Plateau.

Heading down it was clear the people marking the track to Hurricane Hut had a sense of humour, with the orange triangles nailed upside down so as to point downwards on the especially steep opening stretches. From the hut, the track, rather than bullishly pushing you down the valley, does a wonderful job of following the lie of the land, while still being parsimonious about any unnecessary height gain.

In the valley there was an abundance of birds. At one point I hear the slow rhythmic beat of a heavier bird that veered sharply away before I could sight anything more than its shadow. I knew it wasn’t a kereru, and it had me wondering if this could have been Rhys Buckingham’s elusive South Island kokako. Highly unlikely I know, but then on my last time in this valley I’d bumped into Rhys as he returned from one of his many missions. 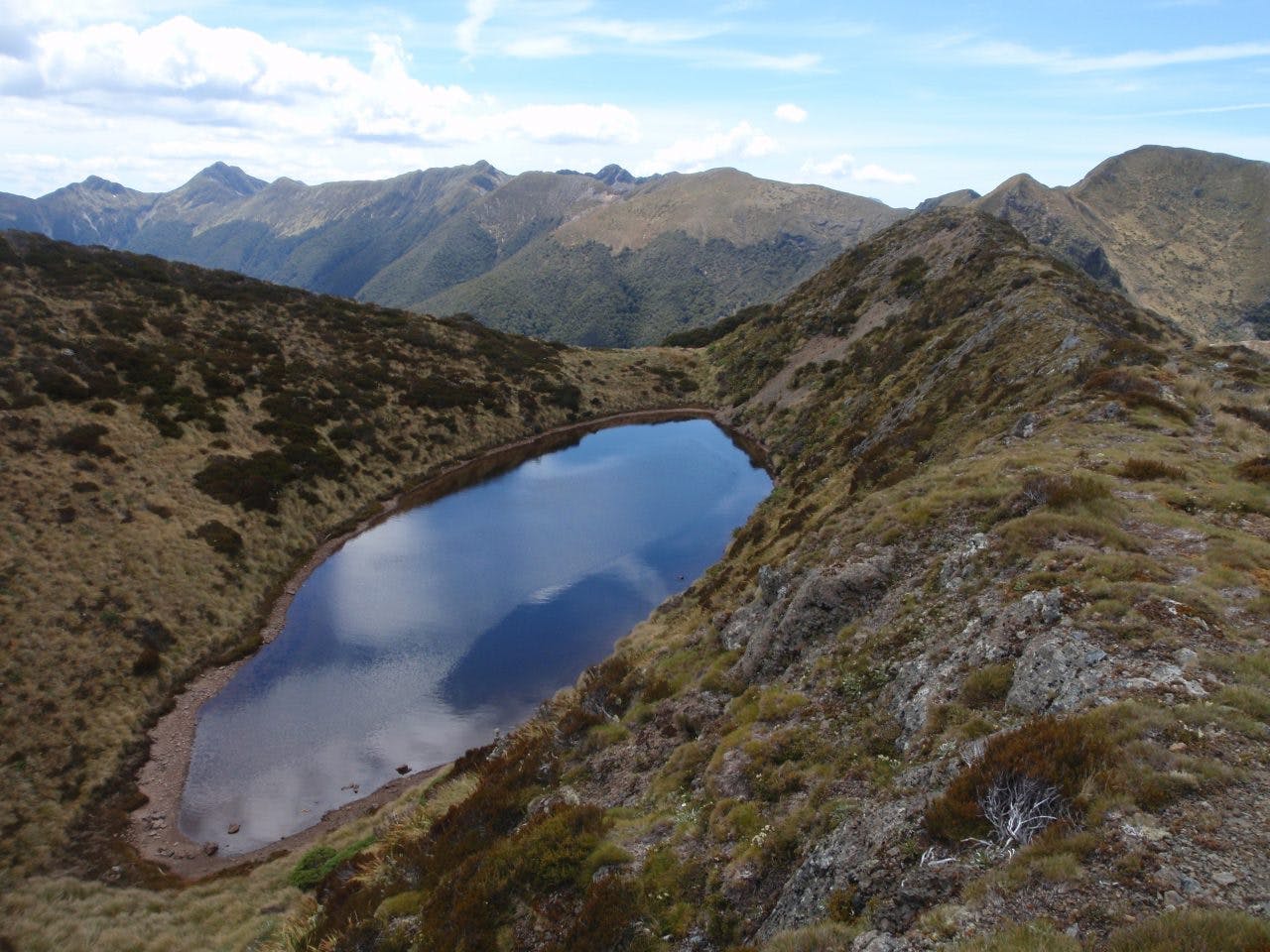 Looking back along the Matiri tops with Nugget Peak in the distant left. Photo: Mick Abbott

The next day I passed by the Lake Matiri Hut to read in the hut books a series of comments about a proposed dam to be built at the mouth of the lake, and shrugged my head thinking dam? I thought it was on the Mokihinui that such things were being proposed.

When I reached Murchison I had the chance to catch up with Mick Hopkinson, who runs the New Zealand Kayak School and ask him more about what was being considered.

He outlined how the local DOC conservancy office had been considering a proposal to dam the outlet of Lake Matiri so that water could be siphoned off to power a small hydro scheme. While the lake itself might be raised only minimally, both the lake and the section of river that flows from it would no longer be subject to its natural flows. Rather Lake Matiri would become a reservoir whose level would be largely determined by electricity demand.

Mick pointed out that DOC’s official maps have added to the confusion, with those that have been produced specifically for the public showing the entire lake to be within its boundary. However it now seems that when the park was gazetted the park boundary was placed along Lake Matiri’s shoreline. Regardless, all the water to be used comes from within the National Park.

Nor is this an isolated proposal. Mick understands most of the West Coast’s rivers have had hydro-electric assessments made with potential sites identified. He talks of how 80 per cent of the country’s major rivers have already been dammed and that “the chance to travel uninterrupted from the source to the sea – as John Wesley Powell once famously did on the Colorado – is not part of our national consciousness.”

It certainly seems that Murchison is well positioned to be a gateway for Kahurangi National Park, and the Matiri Valley would be one part of the park people could easily access. Mick believes, given the roading requirements for the dam, it would be timely to consider the impact the dam and associated access roads would have on attracting more people to Kahurangi National Park, prior to any consents for dams and water rights being issued.

Looking back on my trip, I noticed it had been bookended by two different experiences. At one end was a camp on Wangapeka Saddle full of anticipation for an adventure and solo ramble across some of amazing public conservation lands. At the other end came Mick Hopkinson’s challenge to be vigilant about proposals that could impact on the conservation estate.

While these are separate experiences they’re also inter-related: part of enjoying our parks is also being prepared to take part in discussions about developments that could affect them.