Kiwi mountaineer Mark Sedon has embarked on a groundbreaking Antarctic expedition, where he will kite-ski across the frozen continent and scale an unclimbed face of a granite colossus.

Sedon is part of a trio that headed to Antarctica on November 9 and will cover almost 2000km, hauling and kite-skiing with 200kg of gear each, and all unsupported.

They will first kite-ski 400km to the Gothic and Hayes mountains, described as the the most remote and inaccessible range on Earth, where they will spend 20 days climbing and skiing unclimbed peaks. The trip culminates with an attempt on the unclimbed 720m south pillar of the spire-like ‘Spectre’ peak. All of the climbs will be attempted without fixed ropes and include ski-descents of couloirs.

The group will then head to the Ross Sea and kite-ski and haul 1200km to the Ronne Ice Shelf.

Sedon’s role is to document the trip for a movie for the NZ Mountain Film and Book Festival, which he directs.

Just before embarking on the trip, he said it was an “incredibly intimidating” prospect.

“I’m really purposely not thinking about it too much. Once I decided to go, I just concentrated on little pieces of the trip at a time. It’s like climbing Mt Everest, one step at a time.” 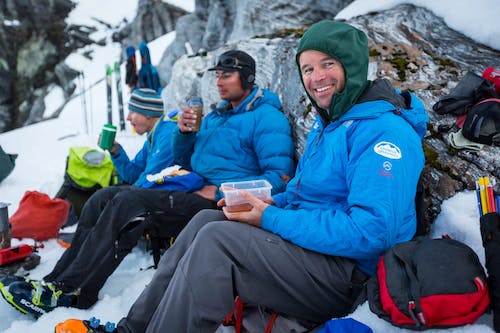 Sedon, who lives in Hawea, works as a skitour guide in Antarctica and has climbed six of the ‘seven summits’ (the highest summits on every continent) including Antarctica’s Vinson Massif (4892m) and Mt Everest.

“It requires a combination of all the skills I’ve spent my life developing. It will be hard, with extremely cold times, but it’s also one of the most exciting expeditions I’ve ever heard about and it just seems a perfect fit to my skills.”

Sedon’s counterparts are British climber Leo Houlding, who will lead the expedition, and Frenchman Jean Burgun. Sedon met Houlding when he spoke at the NZ Mountain Film and Book Festival last July and only had his position confirmed two months before the expedition.

“One member of the team withdrew while he was here. Houlding was stressed out and said to me that it was impossible to find someone who ticked all the boxes: a good kite skier, skier, climber, photographer, cinematographer, with Antarctic experience who could get 10 weeks off work. I said that I could, jokingly, and he looked and me and blinked, then said ‘perfect, you wanna come?’.”

The expedition is expected to finish in January.