If you love working in isolated places, you couldn’t do much better than Antarctica. Al Fastier has spent 20 seasons on the frozen continent, most recently restoring huts built during the age of Antarctic exploration. A typical trip sees the 58-year-old camping on the ice for three months, working in a team of seven for six-and-a-half days a week in the perpetual light of the polar summer.

“I love camping out there,” Fastier says. “When the sea ice breaks up there are penguins everywhere, minky and orca whales are often breaching, and seals waddle on shore and park themselves beside your tent, snoring next to you as you try to sleep.

“It’s easy to put yourself into the minds of the early explorers. For the most part, nothing has changed.”

The historic huts act as time capsules of one of the last frontiers of exploration. Working as a programme manager for the Antarctic Heritage Trust, Fastier preserves artefacts from the historic buildings against the harsh Antarctic environment.

“For me, the stories of that heroic age of exploration are so important,” he says. “I believe these buildings are touchstones to keep that alive.”

Fastier grew up captivated by the stories of  Antarctic explorers and first found his way south in 1987, working for a year as an electrician at New Zealand’s Scott Base on Ross Island, at the foot of Mt Erebus (3794m). But, after spending months in the perpetual darkness of the Antarctic winter, he had what he calls a mid-life crisis – albeit in his mid-20s – and decided to study parks and recreation management at Lincoln University.

While living in Twizel, Aoraki/Mt Cook National Park became Fastier’s playground, where he would go ski touring and climbing. One particular trip still sticks in his mind.

“One Easter a friend and I biked from Twizel to Mt Cook and then carried our bikes over Copland Pass and cycled back again via Haast Pass. I remember setting up the bikes on top of  the pass and the mountaineer Garry Ball was guiding clients nearby – they just couldn’t believe seeing these two guys up there with bikes.” 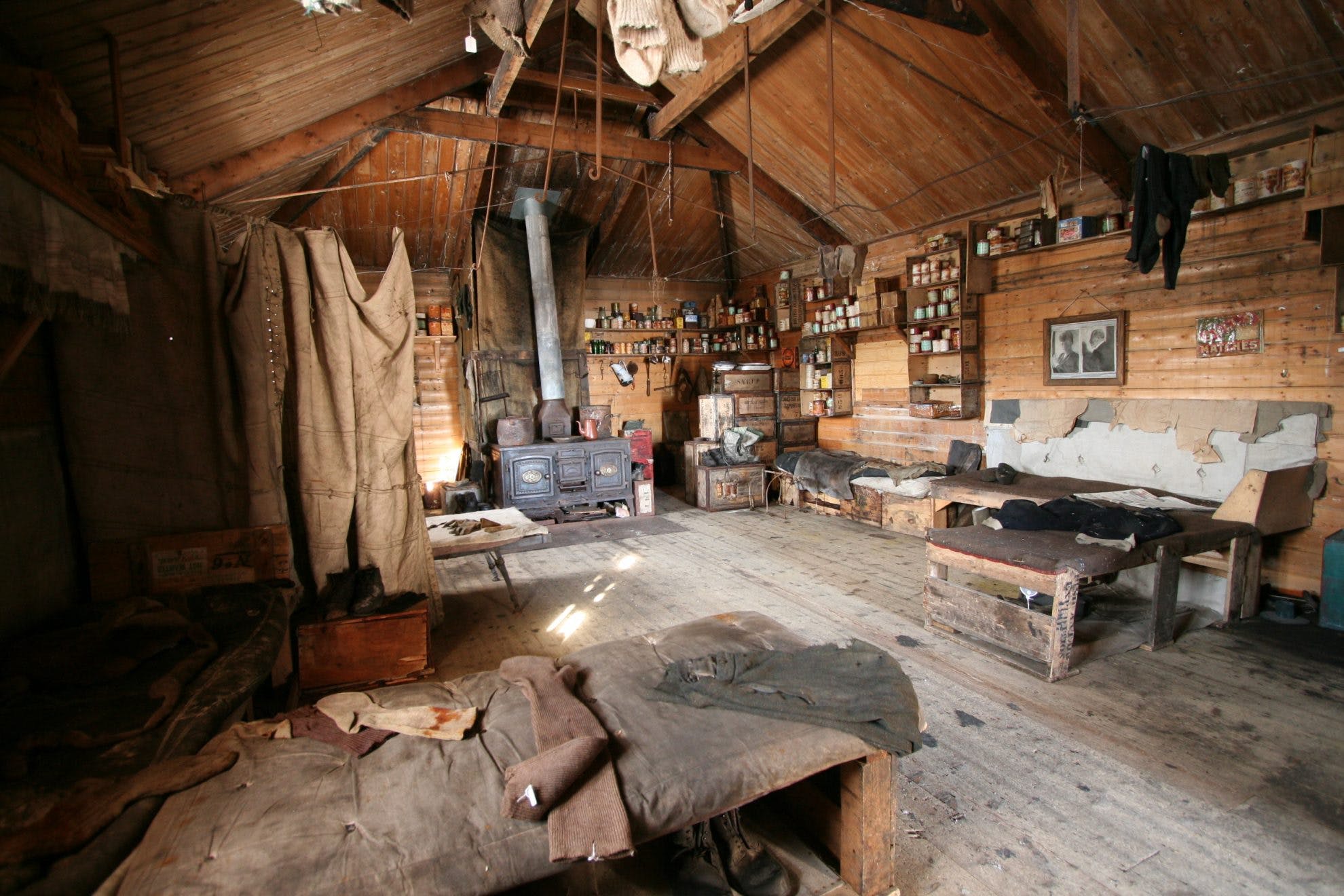 Shackleton’s Hut on Cape Royds looks almost exactly as it was 100 years ago after Fastier and his team completed its restoration. Photo: Supplied

Fastier soon developed skills which took him back to Antarctica, working as an assistant for scientific field parties.

“I was able to leave the university early to head down to guide,” Fastier says. “I ended up sitting my exams in Antarctica – I still had to have a supervisor for the exam, even out in the middle of nowhere.”

He was mainly guiding in the Dry Valley – a series of snowless valleys near Ross Island, and one of the most extreme deserts on Earth.

“It’s like hopping in a time machine – you can see what the Southern Alps would have been like before there was any vegetation. It’s pretty stark, but very beautiful.”

At the time, the scientists were working on a NASA project looking at how life survives in extreme environments to discover whether life could survive on Mars.

After graduating from Lincoln, Fastier worked for DOC and became field centre manager in Makarora. During this time he also worked as a Government representative on tourist boats in Antarctica. While showing tourists Captain Robert Falcon Scott’s Terra Nova Hut, he found it had been flooded by melt water, and he ended up being seconded to work for the Antarctic Heritage Trust.

Ten years on, Fastier says Antarctica is a part of his life.

“When I recruit people, I warn them it’s very addictive,” he says. “It’s such a privilege to work on these buildings and the Antarctic environment is spectacular. But as time goes by, what I enjoy most is working with the people in these remote locations. All of  those first world problems get stripped away. Everyone poos in the same bucket and everyone starts smelling the same, so you’re all on a level playing field – that whole office structure falls away.”

“He had a sore knee, so I was asked to be his ‘stunt double’. I had to put on his big red coat and try and walk like he did while a helicopter flew around filming me.”

Off the ice, the adventure doesn’t stop. Fastier has cycled through Norway, the Himalaya and Patagonia. He walked the length of the Southern Alps with a friend four years ago. Last year, he led a team of three vintage tractors on a trip from Piha to Aoraki/Mt Cook to fundraise to restore Hillary Hut – the first New Zealand base built in Antarctica.

“I like slow travel – tramping, cycling, tractoring – you feel like you’ve earned the experience. I’ve got this wee postie bike, a 110cc, at my home in Glenorchy, and I plan to ride it to all the way to Glenorchy in Scotland. On that kind of trip, you can really connect with people.

“There are so many adventures I’d like to do, but at the moment Antarctica still has the greatest pull.”