GPX File
Lochnagar Hut (gpx, yo 634 B)
Your device does not support GPX files. Please try a different device.

With our packs straining at the seams with a week’s worth of supplies, my girlfriend and I began the long climb to Shotover Saddle.

We’d just ambled the few kilometres from the road-end car park through the verdant Matukituki Valley. Once at the saddle, we planned to drop down to Tyndall Creek and then climb to Lochnagar (also known as Goat Lake by locals). From there we would move on to Snowy Creek, Dart Hut and Cascade Saddle as we circled back to the Matukituki.

We knew the weather could be unpredictable in these parts, so we had identified two emergency exits via Shotover Valley to Branches Station or the Rees or Dart Valleys to Glenorchy.

The one critical bit we lacked information on was the traverse from Lochnagar into Snowy Creek. Undeterred, we had sorted our gear, confident that our past tramping experiences would allow us to finish the trip as planned.

We were expecting a tough but technically easy climb to the tarn just below Shotover Saddle, roughly 1000m above the Matukituki Valley but were surprised when a few hours later we made it to our campsite with a spring still in our steps. It was a beautiful day with hardly a breath of wind to disturb our tent, which we pitched on a patch of real estate that traded protection for grand views of the Matukituki Valley and Rob Roy Glacier.

The mild afternoon was spent reading and enjoying the sunset. Our hope was that this weather would hold for when we headed back down at Cascade Saddle in a few days’ time. An important item on our agenda was to check in at Dart Hut to get an up-to-date weather forecast before attempting the slippery slopes back into the Matukituki Valley. This was still days away, though, and our job for now was to enjoy ourselves and be well rested for the strenuous days ahead.

The grassy slopes in the marshy upper basin of Tyndall Creek is lovely terrain to cross, leaving the only worry on our minds how to get into the valley. We decided to stay on the ridge, at about the 1500m contour, south-east of the saddle, rather than following Tyndall Creek to the valley. The challenge lay just before Tummel Burn Hut: a few hundred meters of notorious New Zealand bush. 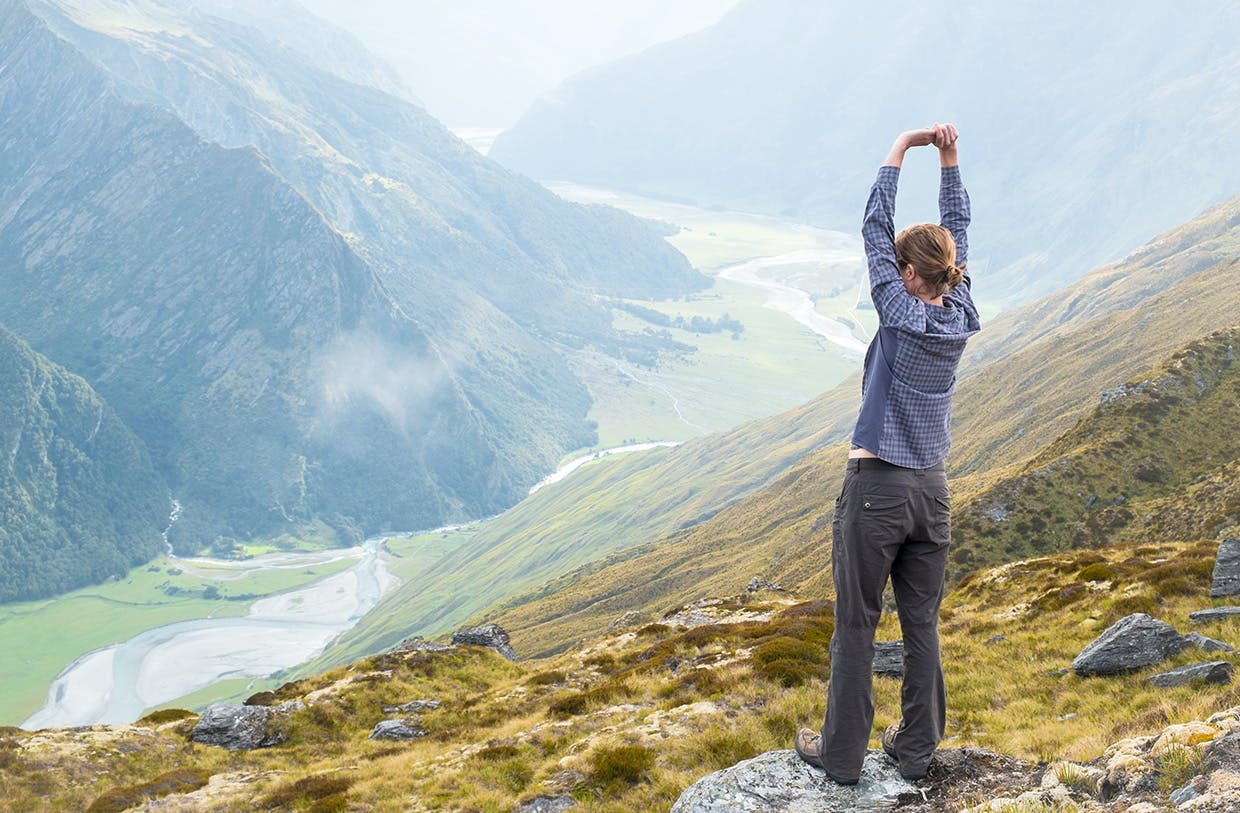 An invigorating view of the Matukituki Valley from near Shotover Saddle. Photo: Dennis Radermacher

There’s an ill-defined route with markers leading through the bush which we had a hard time following. In the end, we spent several hours on the last two kilometres, losing the route numerous times and ending up down-climbing a little canyon just 200m north of the hut. To our dismay, there was no way through the creek bed, which narrowed into a wild gorge. Having to back track for an hour, only to down-climb near-impenetrable bush yet again took a heavy toll on our mood. Swearing like sailors and more than once wishing for a machete, we ended up taking 10 hours on what had looked like half a day’s work.

A word of advice: stay high and close to the ridge on the descent and take your time spotting markers in the bush. It could save you hours.

Tummel Burn Hut offers some shelter from the sandflies and with the door firmly shut we made good use of it for cooking. We ended the day passing out to the sound of sandflies pattering on our tent like summer rain.

The next morning, after donating a decent amount of blood to the hordes of sandflies outside our tent, we continued on the true left of Tyndall Creek. Another three hours of bush-bashing later (although an improvement from the previous day), our seriously strained legs rejoiced at the sight of a farm track at Pine Creek Flat on the Shotover River. From there we made good time, crossed the river at Lake Creek and started up the well-defined track to Lochnagar.

The wild waters of Lake Creek and dark clouds further up the valley warned of a forecasted front coming in from the west. The well-trodden farm track led to a flying fox that got us across safe, sound and, most importantly, dry. Little mercies!

At this stage we were both feeling the strain of the past two days. The wide farm track soon tapered to a narrow trail in the underbrush. Halfway up, we noticed that some of the flora had little signs with the plants’ names next to them like in a botanic garden. We were not sure if this was an attempt at backcountry humour but we were happy for the distraction.

After nine hours and a few false peaks, we dragged our tired bones through pouring rain to the little hut by Lochnagar. Visiting Lochnagar was something I had anticipated doing for eight years, but all I could think of was the tomato soup we were having for dinner.

Lochnagar Hut is privately owned and on Branches Station, but the hut book shows that lots of groups find their way here, seeking the shelter of the tiny four-bunker. It’s offers rustic accommodation, but we happily indulged after two days in a tent. The view through the window of the lake and steep-sided peaks was unbeatable.

Before long, a group of six soaking trampers joined us. They had cycled and walked in from Branches Station. Half of them were camping beneath tarps. Thus eight people accompanied by a million sandflies had their respective dinners in a hut for four.

With the weather worsening and we still feeling exhausted from the long climb to the hut, we had to make one of these tough backcountry calls for safety’s sake. A 30km walk to Branches Station was less than appealing, but we didn’t see we had much choice. Getting up and across the peaks east of Lochnagar and dropping into Snowy Creek would have pushed our luck too hard. 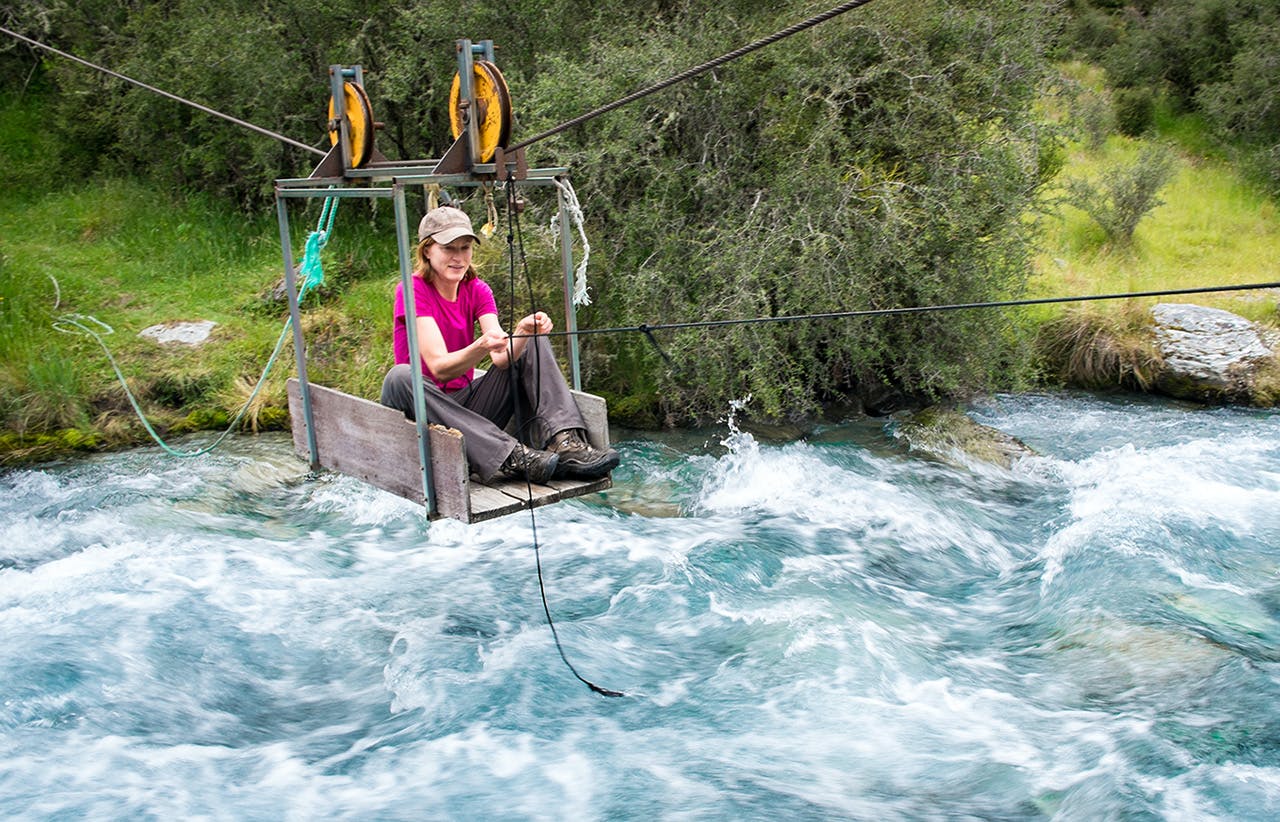 The following day we decided to walk the roughly 30km in one long push and be done with it. The rivers were still flooded and would have been impassable if not for the two flying foxes that got us across Lake Creek and the Shotover River.

Staying on the true left of the Shotvover for the rest of the trip, the only challenge was in climbing over the little knob marked Pt706 by Greenland Spur. The eastern side is a little rough but to our delight we found a little track leading down. It joins the farm track close to a bridge that is only visible on the Topo50 map if you get your magnifying glass out.

The next bridge at Shiel Burn was nothing but a few logs spread across the hillside. What must normally be a little stream was still flooded from earlier rainfall. It was finally time to get our feet wet. We played the crossing safe by linking up and probing carefully. We later heard from the trampers at Lochnagar Hut that they had to wait nearly two hours for water to drop sufficiently to cross Shiel Burn with their bikes on their backs.

For us it was an easy stroll to Branches Station. The GPS clocked in at 28km from Lochnagar. We were worried that our ordeal was not yet over, but the kindness of strangers saved our day. A friendly couple, looking after the station during the holidays, offered us the use of the old homestead, complete with hot water and real bed. Part of our complimentary holiday package was a ride out to Skipper’s Canyon the next morning.

Our story is not half as interesting as it would have been had everything worked out as planned and we had not so badly misjudged travel times and the terrain. But we still fondly remember it as our little Lochnagar adventure.