There are times in your life when being a parent seems like you’re role-playing scenes from Back to the Future. You look down and your son or daughter is wearing the same jersey you once wore, or is playing with the same Lego on the same mat in the same living room. You see a miniature model of yourself, reliving snippets of life you thought you had kissed goodbye decades ago. Sometimes the sight of it keeps you feeling young, other times it reminds you that you’re anything but. What it always does though, is encourage you to do all you can to provide a stimulating and rewarding environment for your children, so that they can gather some of the same memories. For some kids this means getting to learn about holidaying in Hawaii, or being taught how to rebuild a car engine. For my seven-year-old son – lucky him – it means being ordered to trudge through mud.

He can blame this on the events of one night, 24 years ago. I was 10 years old. I loved the games and adventures into which two of my adored uncles would include me. Usually it would be exploring the sand dunes at the beach, or hunting down obscure backyard cricket pitches, or (memorably) making a competition out of who could shovel the most dog poo from the garden into the famous tin poo-can. Clearly, I was up for anything. So of course I said yes when they asked me if I wanted to come along on something called a ‘tramp’. It soon became clear that they had chosen the worst possible combination of times and places to introduce a kid to tramping: winter, night, the Tararuas, the old Waitewaewae Hut.

I was, of course, totally prepared: I shoved clothes into my school bag, put on sneakers, looked out at the rain and decided this would be a job for rugby socks. My cousin, who was a couple of years older, also came. The four of us strode across the swingbridge over the Otaki River as thick rain clouds rolled down from the tops and shot a million rapid-fire bullets into the water below.

Our journey to Waitewaewae Hut took us past the famous old steam boiler. It sits there, dead and rusted, eaten by the soil and the moss. Even in death it looks grumpy, like it had no choice being corralled into the bush. But to a 10-year-old it was a thing of wonder. Evidence that souls of the past, much more foolish than you, had voluntarily come here before, and actually built a railway track. How cool was that?

Darkness fell on my first night in the bush. We splashed up Saddle Creek and shone our torches down over the plateau, through the dark native bush, the bog and the ever-constant rain. We were soaked. The hut, when we arrived, couldn’t have been less homely. An oversized barn, rotten to the core with moisture a permanent feature of every surface. It was cheerlessly plonked in a razed clearing; the thick vegetation blocking any view of the sun, not that the sun was ever likely to show its face in a place like this.

One of my uncles found two mattresses in the woodshed. He dragged the sodden things inside over his shoulder and flopped them on the bunks, like they were a couple of deer carcasses. Then we watched with interest as maggots squirmed out.

During the night, rats prowled the rafters and the rain found new holes in the roof with which to seek us out. The next morning we donned wet clothes and walked back to the car, through the rain and past the old clapped-out boiler, which seemed to smirk at me from its jagged, rusty face. 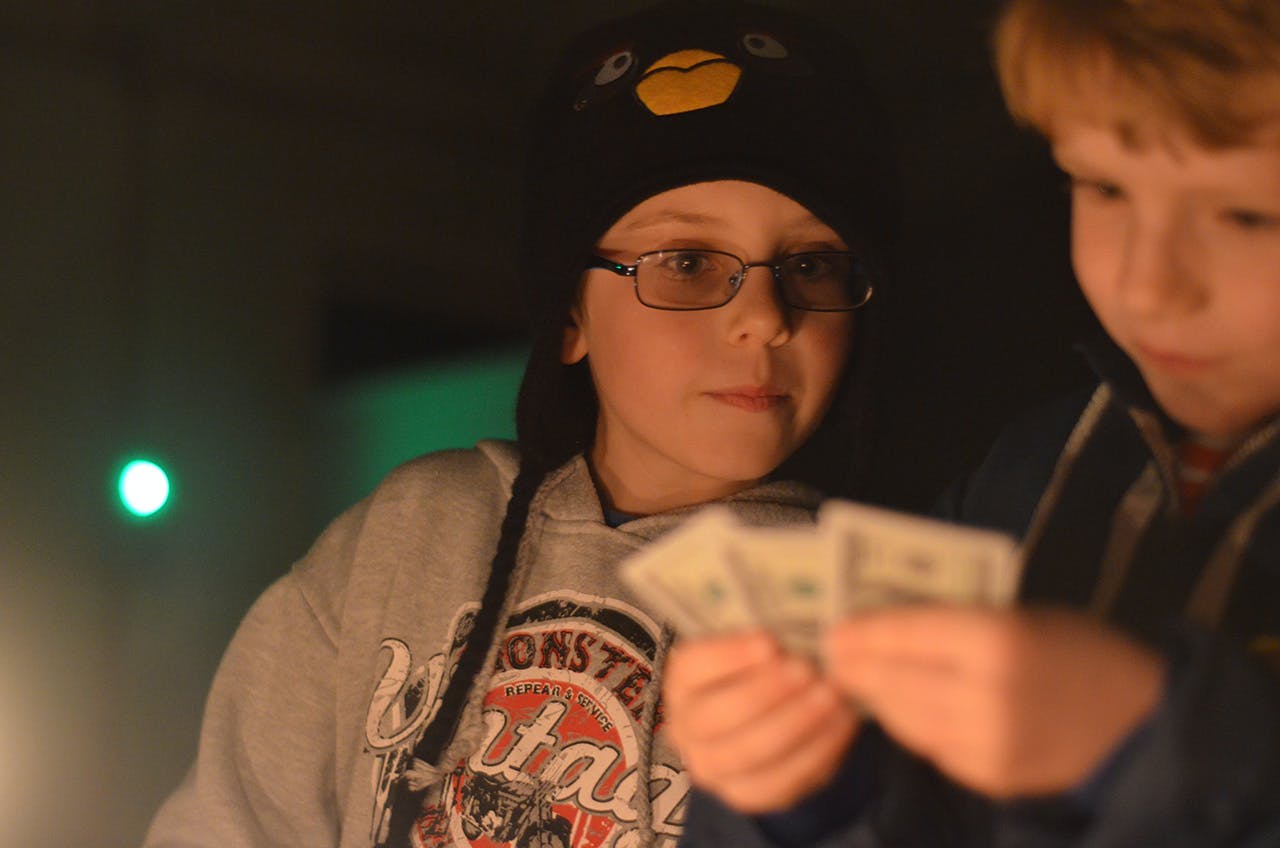 A game of cards after a hard day’s tramp. Photo: Ricky French

But here’s the thing: I loved every minute of that ridiculous tramp. So did my cousin. Our uncles had given us a gift: a burgeoning love of tramping. Had we been adults on that first disastrous tramp most likely we would have never set foot in the bush again (and very likely never again spoken to the evil sods who took us). But kids don’t judge hardship as harshly. Kids don’t care if they’re not wearing Gore-Tex boots or if the hut doesn’t have enough bench space. They want a communal experience with people they love. They want an adventure.

It was with this in mind that I decided it was time to introduce my son to tramping. He’s got a few good ones under his belt, including the steep climb to Sunrise Hut in the Ruahines, and, earlier this year, a challenging circuit in Nelson Lakes National Park along Roberts Ridge to Lake Angelus Hut, then back via Speargrass Hut. He doesn’t yet have tramping fever, but he understands what tramping is about. He gets the whole pointless gist: walk for a long time, arrive at hut, eat, play games, sleep, walk for a long time, arrive at hut, etc. The best thing for him (straight from the horse’s mouth) is getting to the hut and ‘looking at all the things’. I can see the attraction. A hut is like the ultimate cubby house. The games are pulled out, dinner is cooked and there are a thousand things to see and do: start the stove, gather firewood, start the fire, find a place for muddy boots, find a secret track in the bush, sort out who’s going to sleep where, write in the hut book, look what’s in this cupboard, drink a warm drink, eat a delicious gingernut biscuit, try to find your torch, try to find the deck of cards, play cards, shine the torch, get in sleeping bag, get out of sleeping bag, get back in sleeping bag, talk, talk, talk.

And for the parents? Well, we get the satisfaction that something wholesome, simple and altruistic is being given to our kids. We get to teach our kids cooking, keeping yourself warm and dry, map-reading and other useful stuff.

But one thing we can’t teach our kids is how to deal with the tramping part of tramping. You can’t teach how to put up with hours of walking, how to deal with tiredness, boredom and a thousand niggles that hound you as you put one foot in front of the other for an unfathomably long period of time. Dealing with the mental side of tramping is the challenge that needs to be conquered by each individual. Acknowledging that this challenge is also the main reward of tramping is the moment you graduate tramping college and become a leader of yourself and, in time, others.

The new generation is well and truly on the rise. Planning is underway to return to the famed Mangatainoka Hot Springs in Kaweka Forest Park. Famed at least in our family. My uncle took me there, and now that same uncle is taking me there again, with my son. My son’s cousin is coming along too; his first real tramp. They are already planning the games: walkie-talkie action up the track, torchlight mission to the hot pools, stick boats for the river. There’s a tangible sense that something big is stirring.

For me, that first real tramp was a life-shaping experience. I wrote about it at school the following Monday. I was invigorated with a burning desire to document that weekend as vividly as possible. It was a wondrous experience, and words swamped the page like a flooded river. My teacher sent the story in to the Dominion, and they published it the next week. And so my love of writing began.

My hope for all parents reading this is that your kids will take their own life-changing moment from time spent in the bush. Or time spent on a beach, or in a shed, or on a rock. Anywhere where there is someone familiar, someone trusted and someone willing to share their passion. And when you give that passion, you trust the receiver to look after it and cherish it forever.

Clothes suitable for the conditions. You don’t need to buy kids an expensive wardrobe, you’ll find kids (especially the young ones) aren’t fussy about things like waterproofness and breathability. Just make sure they have dry clothes to change into at the hut.

Snacks and treats for enticements. What better way to encourage kids to pick up the pace than the promise of a treat at the next rest stop?

Games, but not too many. There’s no need to pack the entire toy cupboard into your pack. Cards are good, portable and light. If there’s more than one child they will find plenty of games in the bush and at the hut. Give the children hints about games at the hut (building a fort inside the hut with mattresses, or writing a play to perform).

A book for quiet time, plus pens and paper. Dedicate half an hour to reading, or getting the children to write about their experience, or sketch a picture.

A sense of adventure and a calm attitude. Remember, it doesn’t have to be perfect. Tramping is about unpredictability, and kids understand that. Be prepared to change plans as you go. When the walking takes its toll and the children are tired, give them plenty of encouragement and praise, and don’t forget the bribes.