What goes up must come down, and in Mt Aspiring National Park, descents don’t get more fun than leaping off a cliff edge strapped to a paraglider, writes Jose Martinez

Standing half way up the North West Ridge of Mt Aspiring, you’re supposed to get a magnificent view of the summit and surrounding mountains. To my right, the mountains did look beautiful, but to my left and everywhere else, ominous clouds were building.

The crux of the climb was behind me and all that remained was a steep three-hour trudge to the top. But mountains rarely let you get away with assumptions, or even well crafted plans. Sooner or later, you are bound to find yourself winging it a bit… or a lot.

My fixation with Mt Aspiring began six years ago. In that time I had made three failed attempts to summit. The first time the pace was too slow, the second time we were forced to retreat when a member of our party couldn’t cope with the exposure of the climb, and on the last attempt gale force winds half way up forced us to turn back.

This fourth attempt started with the hope of finally climbing the mountain, and climbing it alone.

My good friend Grant Maslowski decided to join me, but instead of climbing to the summit, he’d stay in the warmth and safety of Colin Todd Hut at the foot of the mountain’s North West Ridge. Not being a climber, when he heard of my plans to climb solo, he named the trip ‘The Finale’.

Ironically, his plan was much more out there. He is a paraglider and planned to fly off the Bonar Glacier and into the West Matukituki Valley – a vertical drop of 1500m or so. I thought – I knew – this would never happen. Paragliding requires pristine conditions, and Mt Aspiring is renowned for the unpredictable nature of the weather. Up there, you’d be happy if you got one clear calm day and if it happened, the plan was to spend it climbing, not paragliding. 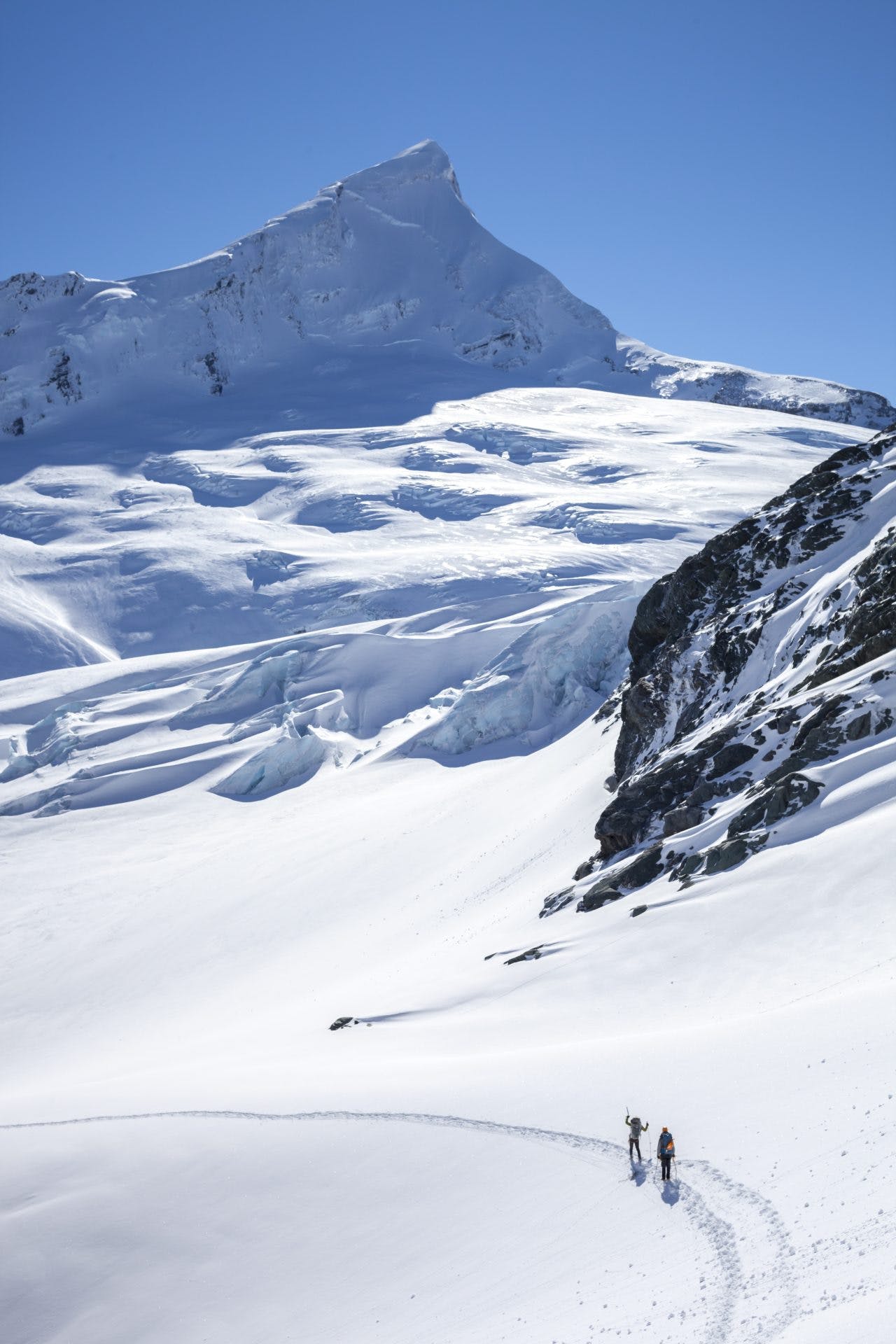 And so, standing on Mt Aspiring’s North West Ridge, alone, after waiting-out days of bad weather, I found myself pushing for the summit. There were three parties climbing below me, each led by a professional guide with a client. Guides are minimalistic, methodical climbers; they use crampons and ice-axes effortlessly; they are craftsmen at work. However, as they had clients to assist, they lagged further and further behind.

The last four hours had been spent climbing up the notorious ‘Ramp’, a several hundred metre slope of 40-50 degree alpine ice considered the crux of the climb: it’s the most strenuous and steepest part of the ascent, requiring front pointing and confident daggering with both ice axes. It’s a special part of the climb as you are most likely to start it in darkness and catch the sunrise before completing it. It’s a place where a single mistake, especially when climbing rope-less, doesn’t bear thinking about.

After the first couple of hours on the Ramp, I lost sight of the other parties. Before long, it felt pretty lonely up there.

As the clouds closed in 400m from the summit, Mt Aspiring dealt its hand. The supposedly straightforward ridge walk to the top, which usually only requires an ice axe for balance, turned out to be a narrow ridge of impossibly hard blue ice. My sharpened crampons suddenly offered little purchase and confident steps were replaced by timid crawling. Before even seeing the summit, my mind started turning to the worries of the descent: most mountaineering accidents happen to tired climbers in worsening weather – particularly true for the Ramp. On the positive side, it was just 9am and the forecast was for fine weather with winds below 35km/hr.

I ascended slowly, carefully placing my crampons over bulbous-shaped ice formations, as if scrambling over slippery rocks. I found myself using both ice axes to always maintain at least two points of contact with the mountain – the hardness of the ice making the climb feel more technically difficult and unforgiving. Immersed in clouds, I kept turning my head to try and spot the guided parties but always drew a blank.

I reached the summit at 10:30am, about seven hours after leaving the hut. Rather than a stylish, heroic climax, the cloud made it feel more like a moment where I’d suddenly run out of mountain to climb. I put my pack down and took a couple of photos – the cloud had ruined any chance of Grant taking photos of me from the hut.

I spent about seven minutes with my thoughts focusing on the down-climb challenges. It’s common for climbers to overstay at the summit, but alone and unsure, those seven minutes felt long enough for me. 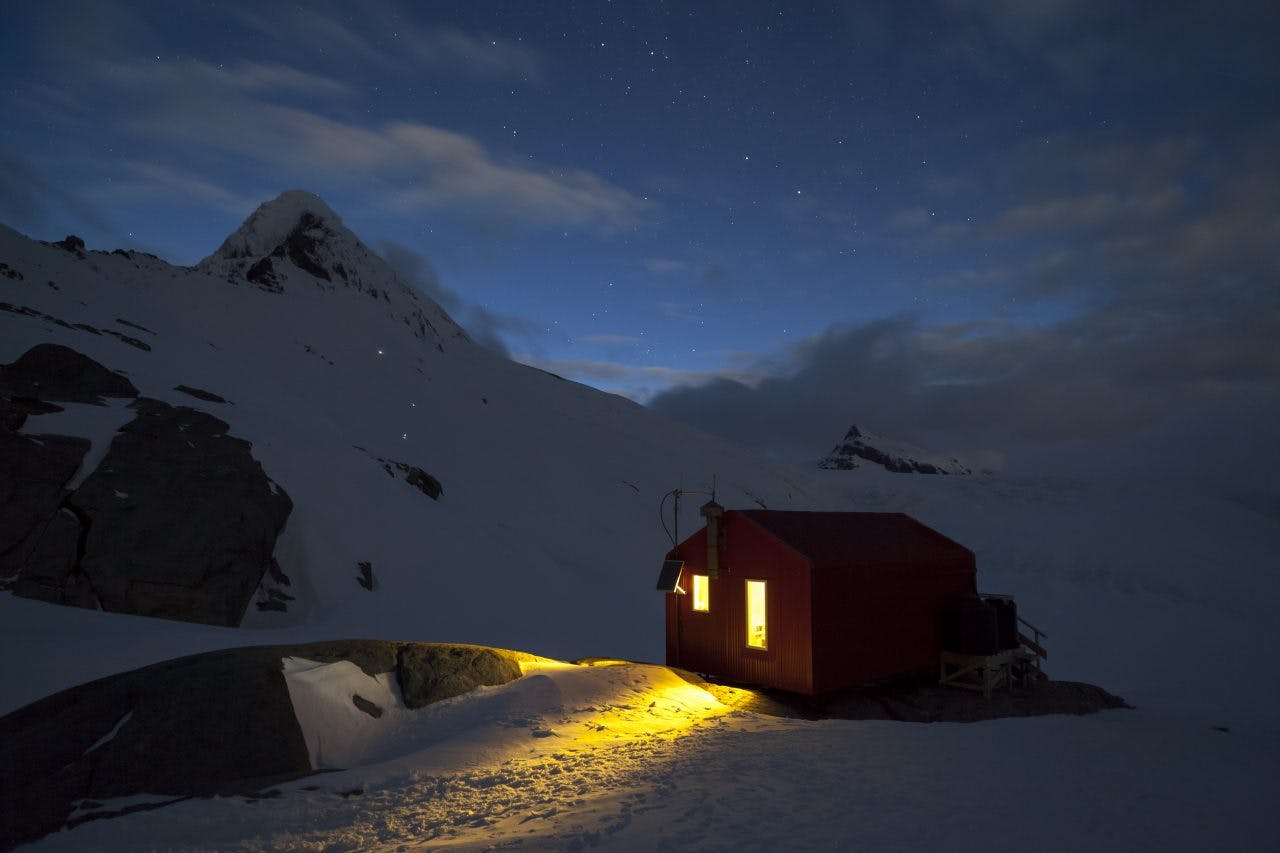 Headlamps show the position of climbers on the ramp. Photo: Grant Maslowski

I descended awkwardly over sections where powder snow had covered the blue ice, making my steps more like guesswork. Eventually I passed a pair of climbers who were still heading up. It was reassuring that at least one other party had continued despite the conditions. No other parties made it to the top that day.

During the descent, the weather began clearing and after a few hours I passed the other two climbing parties on their way down. Grant greeted me a few hundred metres from the hut. I was done! There was no celebration at the top but if I had to pick a moment it would be when Grant met me, elated at my success and then carried my pack the remainder of the way. Back in the hut, the other parties congratulated me and offered me a delicious bowl of pasta with chorizo.

Later that night, the 8pm radio dispatch provided us the weather forecast for the next day. It promised a dream day: no wind, no clouds, just sunshine. In the morning, the elusive pristine-weather came through; it was Grant’s time to wing it.

So without rest or delay, we packed and roped up for the march up the Bonar Glacier, rewarded the entire way with breathtaking views of the western and southern faces of Mt Aspiring. Eventually, we arrived at the edge of the glacier called Breakaway, a cliff of ice and seracs located between Mts Joffre and French. At one end of Breakaway, we were relieved to find a narrow gentle slope, which gradually steepened until all that was left was a 1500m drop. It was an imposing sight.

It was from here that Grant was going to launch himself off the glacier and fly down the Matukituki Valley. As I contemplated this, still unsure whether to play it cool or ask Grant to reconsider his plans, he put his 30kg pack down and calmly inspected the slope. He deemed it fit for take-off and then unfolded his paraglider wing, spent all of five minutes fiddling with lines, clips and buckles, and then said, “See you when I see you”.

Overloaded with extra gear, Grant struggled to run down the gentle slope but as it steepened he simply lifted his legs and flew away, immediately turning towards the seracs for a closer view. The imposing sight now featured my friend in majestic flight, one hand on the paraglider’s controls, the other holding his camera and furiously taking photos. 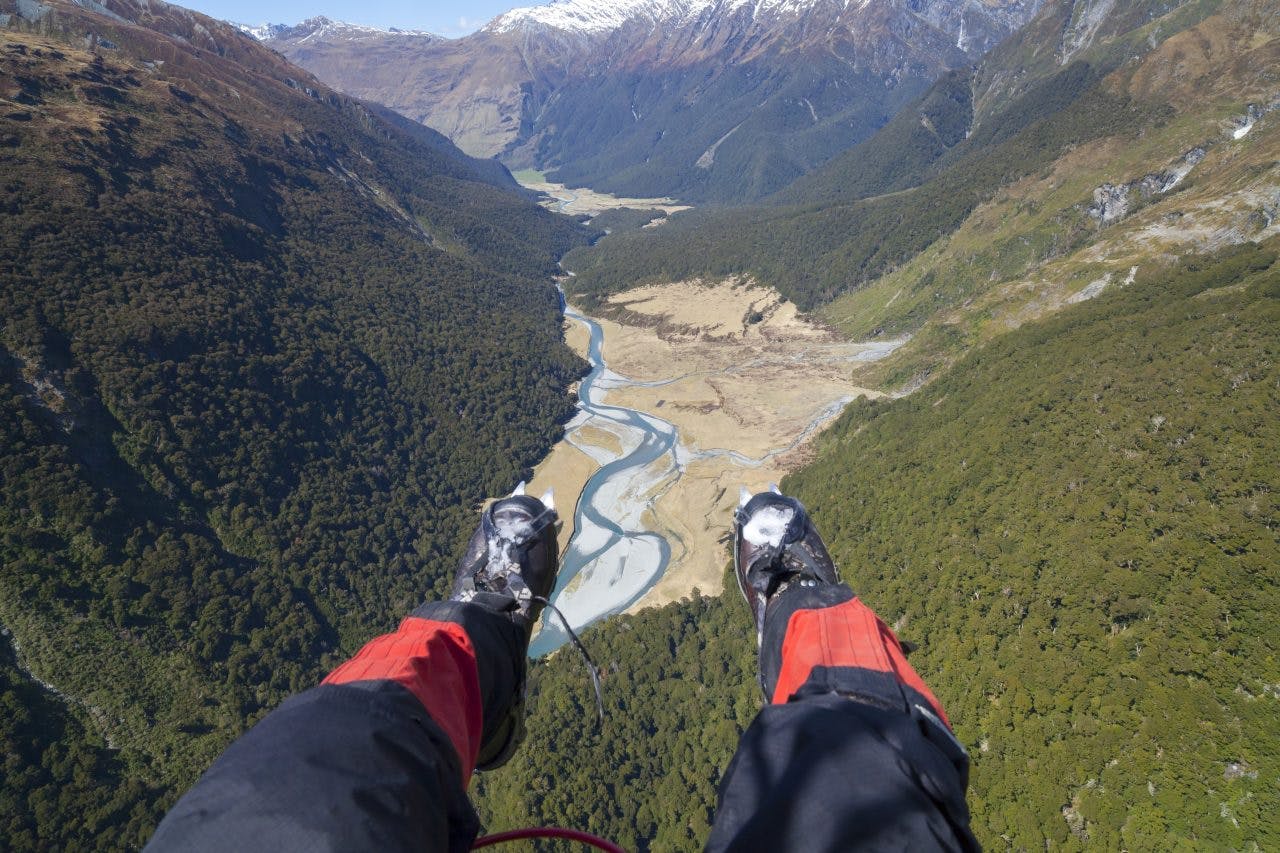 While soloing Mt Aspiring was something of a personal best for me, Grant’s flight from such a remote and precarious spot is a feat few have done. Fortunately for him, it spared him the descent neither of us were looking forward to. The Breakaway can be used by mountaineers as a steep, direct access onto the Bonar Glacier, but I have not heard of many people using it to exit the glacier. The day before I had been totally focused while descending Mt Aspiring’s summit. But now I felt more tired, heavier and in less control of the situation.

Once Grant’s blue and white wing disappeared from view, it was time to find a way down. I sidled beneath Mt French to French Ridge, negotiating a tricky bergschrund and was forced to run and jump over two crevasses around the glacier contours. I walked on past French Ridge Hut, down the steep track to the valley floor. It was around 8pm by the time I walked into Aspiring Hut and was ecstatic to hear the warden tell me about “a guy carrying a paraglider” who had walked through a few hours earlier.

I made it to the car park around 11pm, beyond exhausted and almost sleepwalking. I found our grey van with Grant inside, fast asleep.