“Hold onto your hats!” warned Dave Crawford as he flung the wheel of his jet boat hard left and threw us into a white-knuckle 360-degree spin. We whirled around so fast I swear I caught sight of my bike directly behind me, although this was impossible, and caught our breath just in time to burst out laughing as we bobbed to a standstill. I never thought I’d have to contend with such G-forces while cycle touring in Otago.

People come from all over the world to cycle New Zealand’s world class trails, and no wonder: Nga Haerenga – ‘The Journeys’ – is the country’s nationwide network of cycleways, comprising 23 off-road routes known as Great Rides that are connected by on-road touring routes. Paul and I had been eagerly anticipating the purpose-built bike trails of Central Otago. Three trails now run end-to-end to create, at 257km, the third-longest off-road ride in the country: the Clutha Gold Trail (CGT), the Roxburgh Gorge Trail (RGT) and the Otago Central Rail Trail (OCRT).

We joined the CGT at Millers Flat, 45km from its origin at Lawrence, delighted to be leaving the tarmac for a while. The gravel crunched under our wheels like perfectly-graded gold nuggets as we rode alongside the impossible turquoise water of the Clutha Mata-Au, the South Island’s longest river. After nearly 1500km of asphalt, I’d forgotten how much fun off-road riding could be, and it was easy to ignore my fully-loaded panniers as the kilometre markings flew by. Fortunately, the hills we encountered were gentle; this section of the CGT varies less than 50m in elevation.

The trail is the culmination of eight years’ work by the Tuapeka and Teviot communities, who have spent thousands of volunteer hours developing both the CGT and RGT. Officially designated as both walking and cycling trails, they opened simultaneously in October 2013 and are already very popular. According to Rod Pierce, chairman of the Clutha Gold Trail, each trail saw around 10,000 riders last summer (locals and tourists).

As the dust of the trail began to play havoc with my chain, rendering it squeakier than a set of ninja-proof floorboards, we passed the sad remains of an old gold dredge. The Kohinoor, her planking jutting from the centre of the river, sank in 1912. She was just one of many dredges working the river in the early 20th century and harvested almost 100kg of gold from the river bed in only four years. Although much less prevalent, dredges still work the river profitably today. 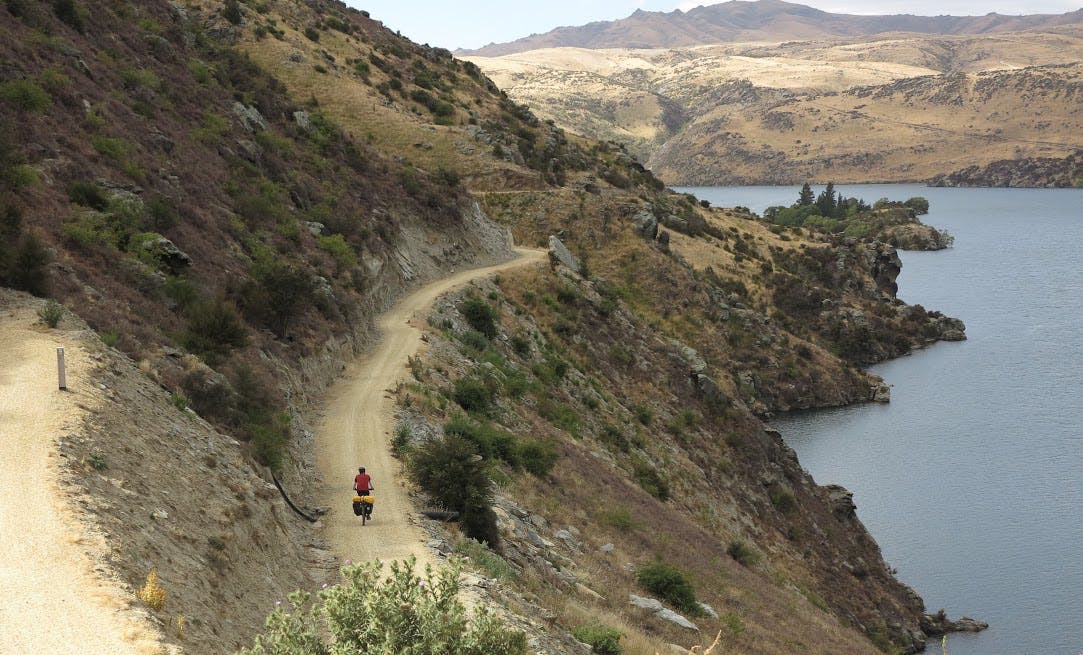 It didn’t take long to ride the 30km to Commissioner’s Flat, just downstream of the huge Roxburgh Dam and officially the end of the CGT. This also marked the beginning of the RGT and with the afternoon still young we set off on the next leg. A steep climb rewarded us with an incredible view of Lake Roxburgh, serenely nestled between the scrubby tops of the valley. The gorge was even more spectacular prior to 1956 when the dam was flooded, drowning some large sets of rapids and raising the water level by about 50m.

From the top, we coasted down some wide switchbacks before settling into a contour track around the gorge, rabbits darting for cover across the trail ahead of us. We got as far as Shingle Creek before making camp at an eerie disused hut, where we plunge-bathed in the lake shallows and devoured a pasta meal. It wasn’t only the falling sun that was preventing further progress though; the trail stopped dead at the water’s edge.

“There are four or five landowners between here and Doctor’s Point that didn’t want to be involved,” explained Dave Crawford, pilot of the Beaumont Jet boat that met us the next morning. “Normally there would be marginal strips along the banks of rivers that are the property of the crown, but the raising of the Clutha when the dam was built meant these disappeared under water and most privately-owned property now goes virtually to the lakeshore.” At the time of the trail construction, some landowners were reluctant to allow access to cyclists but it’s possible under a future pastoral lease review the marginal strip may be reinstated and the trail completed. For now though, the only way to progress the 15km to Doctor’s Point is by boat transfer. 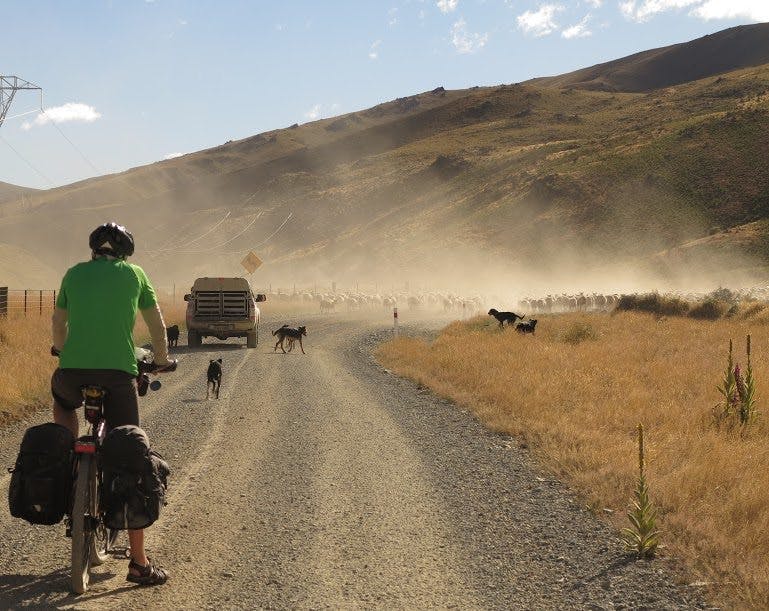 A woolly roadblock stops us in our tracks on the way through the Kakanui Mountains. Photo: Dan Slater

With 30 years’ experience guiding tourists on the river, Crawford had no trouble filling us in on the history of the gold rush. “The Clutha is one of the richest gold-bearing waterways in the world, second only to the Klondike,” he told us, “When they first discovered gold in 1861, in Gabriels Gully near Lawrence, 30,000 miners came from as far away as Alaska.”

A couple of early miners were Hartley and O’Reilly who came from Ballarat in Australia and followed the Clutha all the way to Central Otago, where they found it laden with gold and were picking it out of the river with their hands. They moved at night and continued on to Cromwell where they prospected for a fortnight, returning to Dunedin with 38kg of gold sewn into their clothing. The provincial government paid them £2000 to reveal where they’d found it and soon there were thousands of prospectors coming through this valley.

After 45 minutes, many fascinating gold-rush stories and that stomach-churning spin, we disembarked at Doctors Point and began another stunning section of cliff riding. The path was so narrow in places that signs ordered us to dismount and walk our bikes. It being a Saturday, there were plenty of locals enjoying the scenery between here and Alexandra, where we stopped to resupply. 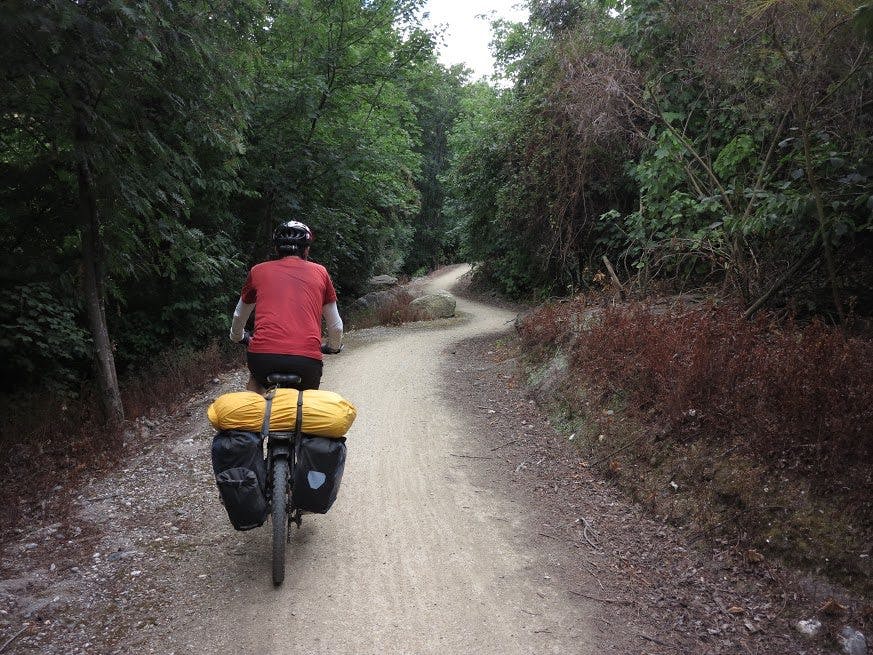 Switchbacks-a-plenty on the trail through Roxburgh Gorge. Photo: Dan Slater

In contrast to the last two spanking new trails, the OCRT has been a staple ride for 15 years and because of its success was the poster-child of Nga Haerenga. Overlying the line of the Otago Central Railway, which was closed in 1990 after 101 years of service, the trail has been phenomenally popular and is estimated to generate more than $12 million a year for local businesses.

After the glorious gorge scenery, the track out of Alexandra, which diverges from the Clutha in favour of the Manuherikia River, was less visually impressive, winding between dry hills of wind-blasted tussock. I soon began to enjoy myself, though: there were creaky wooden viaducts, cuttings through which the wind gusted like an aerodynamics research lab and rustic old station sheds at Galloway and Olgin. Foals and fauns frolicked in the meadows and crossing the old-fashioned trestle bridges was like riding through an old cowboy film; I half expected each structure to be dynamited by bandits before we made it across.

Dusty and wind-blown, we coasted off the rails and into Omakau for the night. The dust had by now infiltrated every aspect of my bike’s drive train and every gear change was a grating, grinding affair. We ploughed on: the next day’s section took us away from the Manuherikia and through the spectacular scenery of Poolburn Gorge and the long, dark tunnels through the Raggedy Range. At Wedderburn, roughly the halfway point, our route took us away from the OCRT and north over the not-insignificant Kakanui Range.

The historic mining town of Naseby is the gateway to Danseys Pass – according to some estimates the highest unsealed road in New Zealand – just before which we utilised a quiet and remote DOC campsite. In the morning we followed sheep farmers and their excitable dogs into the sanctuary of the rugged mountains, where we encountered only unshorn rams, colourful apiaries and a single, forlorn gold prospector. “There’s still plenty there,” Crawford had told us. “You can pan yourself and you’ll get gold, although very small finds.”

The final ascent up the pass was short and brutal and left us gasping for breath, yet cheering inside. We could almost see Christchurch. Our descent to the Waitaki River Valley crossed the Alps 2 Ocean Cycle Trail, almost the longest of the Great Rides, but unfortunately the gravel was behind us now and the flat, straight Canterbury Plains ahead. From here on the going would be faster and a lot less fun, but at least my cycle chain was happy again.