The row boats are back

Common sense has finally prevailed in Te Urewera, as Lake Waikareiti’s row boats, which have been locked up for more than a year, are now back on the water.

The boats – so popular with summer visitors for more than 60 years – were locked up after a man and two children needed to be rescued after getting blown to one side of the lake in rough conditions.

But they are now available for hire once more at the same price as before; $20 for four hours or $60 for 24 hours.

The only change is rowers must have a PLB with them. These are also available to hire for $15 when hiring a boat.

Lake Waikareiti is situated close to Lake Waikaremoana. It takes about an hour to walk to the lake and the boats are popular for fishing, as well as for overnight stays at the gorgeous Sandy Bay Hut on the opposite side of the lake. 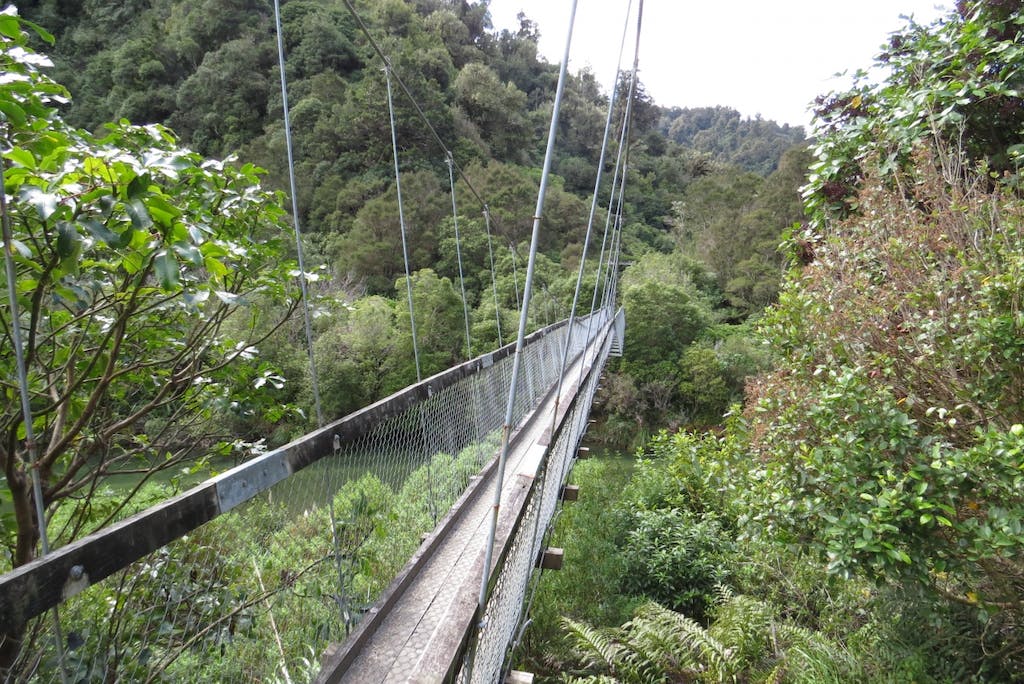 The Hopuruahine Bridge prior to the accident. Photo: DOC

The Hopuruahine Bridge has been re-opened months after a cable gave way in September last year, plunging four trampers into the water. The bridge, situated on Lake Waikaremoana Great Walk is now fully-repaired and load tested.

Trampers have been hard at work transforming a disheveled and overgrown hut.

Te Rereatukahia Hut, in the Kaimai Range had been neglected for many years until Waikato Tramping Club members set to work.

Since October last year, they’ve extended the deck and roof, installed a wood burner and a stainless steel bench and sink with running water, they’ve built a wood shed, and painted the exterior.

The hut is situated on what will soon be the Kaimai Ridgeway and is part of extensive improvements taking place along the Kaimai Range. 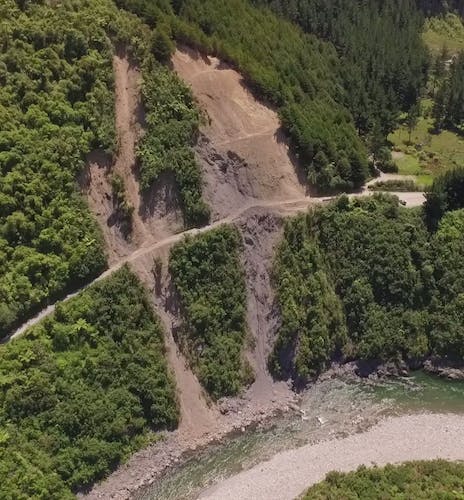 Drone footage of the slip at Blue Bluff

One of the country’s most popular road ends for trampers has been closed indefinitely, as it emerges a slip may be far more dangerous than previously thought.

Road workers were already clearing debris off Otaki Gorge Road, which leads to the Tararuas near Levin, when they discovered cracks on rocks 300m above the road which suggested the area known as Blue Bluff is a slow moving slip.

It says the road will be closed throughout the summer and may well continue to be for months to come.

“Our suspicion is that the cracks indicate the whole hillside could be slipping and we need to find out exactly what is going on,” said the council’s Tony Martin. “If our worst fears are realised, we could be looking at a closure of months rather than weeks. We will know more by the end of January.”

Tararua Tramping Club is one of many groups having to re-plan trips over the summer. Club president Peter Barber said it’s a real shame this has happened to such a popular spot. “It seems any solution to the problem would cost a lot of money,” he said. “It’s ironic that as a nation we spend so much money on some roads, but don’t want to spend money on a road like this which is important for tourists and recreationists.”

Barber said Otaki Forks was the premier access spot to the Tararuas on the western side and has a lovely campsite. “These things happen and as trampers you always need a plan B because you never know what’s going to happen. Back in the day, before there was a road to Otaki Forks, we used to park seaward of Blue Bluff and walk through.” 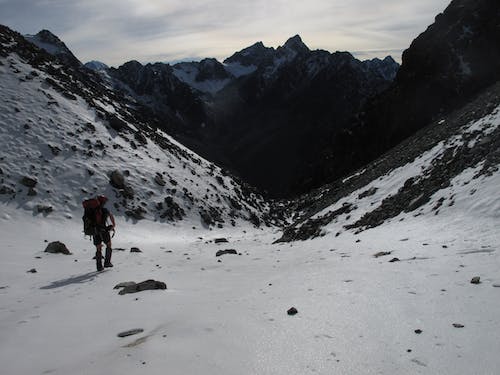 The Burnett Mountains would be far easier to access if the FMC gets its way. Photo: Richard Davies

The Federated Mountain Clubs is urging the Government to buy Mt Cook Station to give better access to conservation land to the east of the Tasman River.

The station has been chopped up in a tenure review process. Some sections are now conservation land which is great news for recreationists, but the position of the remaining freehold land makes the conservation land hard to reach, as the river blocks easy access for those entering from the west.

The FMC’s Jan Finlayson believes that by purchasing land, the Government would open a whole world of opportunities to trampers and climbers, as the station offers good access to the Burnett Mountains, and the Liebig and Gamack ranges.

Finlayson encourages those who support the cause to contact the Government as soon as possible with a strong message that it should purchase Mt Cook Station. Tenders close mid-February. 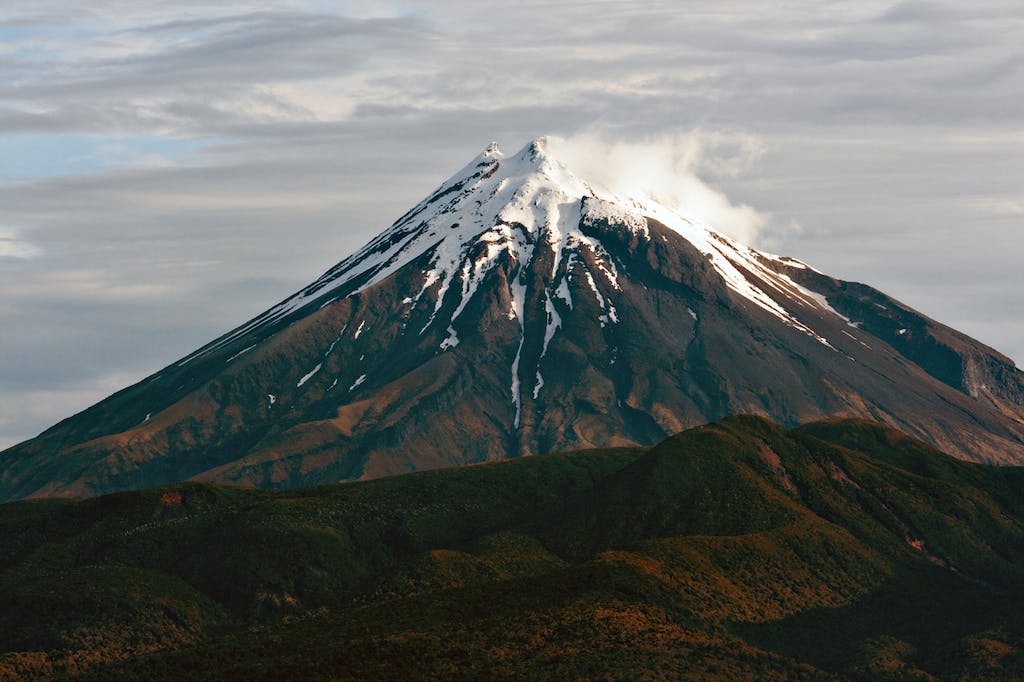 Mt Taranaki could be cleared of all goats and many other mammalian pests in 10 years if a $24 million conservation project goes to plan.

Project Taranaki Mounga aims to remove all goats, significantly reduce the likes of rats and possums, remove weeds and restore the ecology of the park.

Funding will come from DOC and the philanthropic group NEXT Foundation.

The foundation’s Devon McLean said while not all pests can be removed, the surrounding farmland will slow the rate of re-invasion, meaning populations could remain low enough to reintroduce native species.

DOC’s Darryn Ratana said if the project’s successful with the goat cull, it will make Egmont/Mt Taranaki the only goat, deer and pig-free national park in the country. 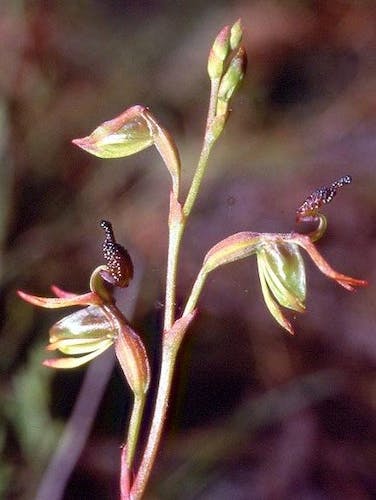 It is hoped the app will help protect threatened species such as this flying duck orchid. Photo: Ian St George

A free app is now available for anyone keen to identify all of New Zealand’s more than 120 native orchids.

Landcare Research and NZ Native Orchid Group teamed up to produce the app called NZ Orchid Key, which will help users identify a plant through type of leaves, flowers, habitat, distribution and a host of other features.

The app creators hope it will help to save rare and endangered species from being picked. The app is available for Apple and Android devices.