A group of volunteers has spruced up a little old hut on the West Coast in preparation for the upcoming summer months. 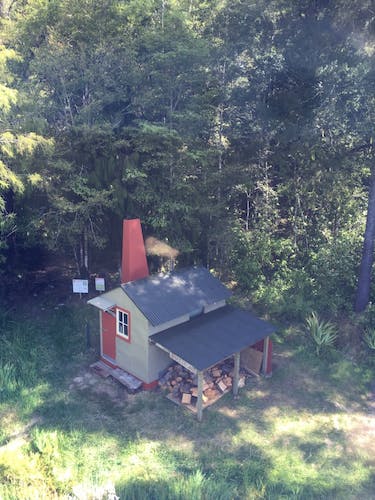 The Buller Tramping Club spent a weekend working on the classic four-bunk Goat Creek Hut on The Old Ghost Road in the Mokihinui River area. The hut, built in 1957, now has a new coat of paint and a fully stocked firewood pile.

A team of four – Christine and Mike Wellington, Muriel Donald, Nick Wilson – spent two days cutting and stacking firewood, painting, and cleaning. They washed the mattresses, cupboards, and carried out all rubbish. Christine Wellington, Buller Tramping Club president, said that while they were working, they saw a steady succession of cyclists doing The Old Ghost Road, many of whom stopped for lunch at the hut.

“Anyone who has been into Goat Creek will agree she is looking a million dollars now,” Wellington said. “Let’s hope with its spruce-up that trampers, cyclists and day trippers all respect the work done and pack-in and pack-out: leave no rubbish behind.”

The club had applied for funding from the Outdoor Recreation Consortium to help cover the costs for the work. The ORC, made up of the Federated Mountain Clubs (FMC), Trail Fund NZ and Deerstalkers Association, provided money to have equipment flown in by helicopter.