Dominating the western skyline of the Waikato, Pirongia Mountain offers excellent views, rich forest, challenging terrain and a bunk for the night.

Nestled in the summit ridge of the mountain, staying at Pahautea Hut is the best way to experience this colossus and the Ruapane-Mahaukura loop is a great way to get there.

From the Grey Road-end, follow the Mangakara Nature Walk for 10 minutes, before branching left onto the Link Track, just after a bridged stream. The trail climbs gradually through open forest punctuated by massive rimu and totara. Gradually, the incline increases and the forest thickens. After about an hour-and-a-half, the track emerges from the bush at Ruapane, a rocky 723m peak with a trig point and excellent views out across the flat green Waikato Plains.

From Ruapane, the track immediately kicks up a gear – you must ascend a rock-face using a chain for stability. This is followed by a steep descent and then another steep climb, a pattern that will soon become agonisingly familiar.

An hour along the undulating ridgeline, the trail emerges at another lookout peak, the 770m Tirohanga, which reveals stunning views across a steep, forested volcanic valley. The volume of birdsong also increases with altitude – there is a concerted trapping campaign on the mountain and kokako were reintroduced in 2017.

The track then sidles beneath a cliff-face, featuring thick vines running down the rock like rope. The walk then becomes as much a mental challenge as a physical one, with a pattern of steep climbs, scrambling up muddy, rutted tracks with tree root handholds and seemingly endless false summits. Finally, the trail crests the summit ridge and, bizarrely after more than four hours of rugged ascent, there are long sections of flat boardwalks – the trail was once notorious for knee-deep mud here. The ridge also produces a change in flora, with thick moss covering gnarled and stunted pahautea (mountain cedar) and possum-chewed northern rata. The rare endangered Dactylanthus taylorii, or wood rose, also lines the track. This parasitic flowering plant is pollinated by native bats and the plants are encased in wire-mesh to protect them from possums. 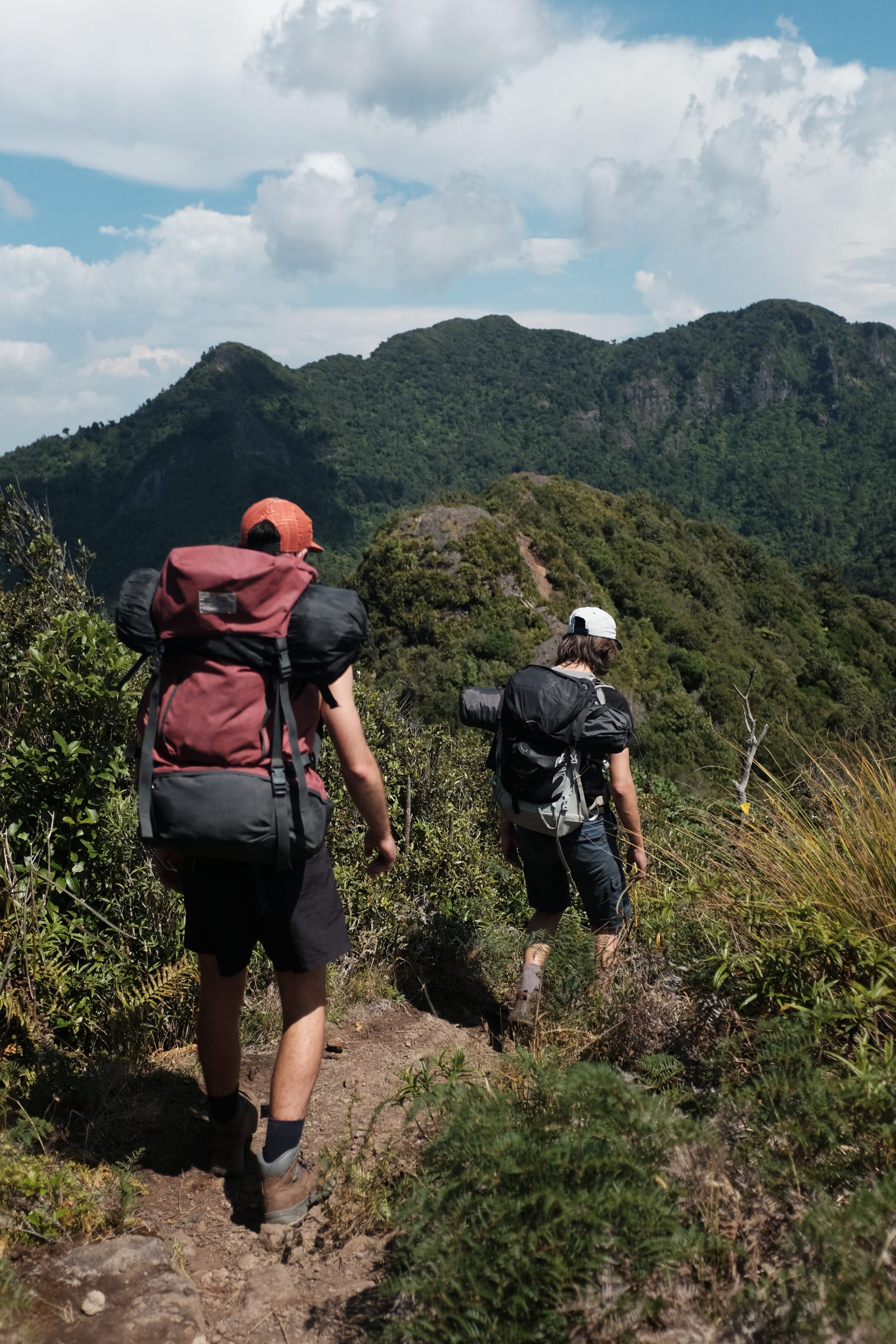 It’s a short stroll to the lookout tower at the 959m summit, revealing 360-degree views. On a clear day, you can see all the way to Mt Taranaki and Mt Ruapehu to the south, the Kaimai Range in the east, the peak of Mt Karioi and Raglan Harbour to the north-west and Kawhia Harbour to the west. The wild forest and dramatic valleys and ridges offer a fitting frame.

From the summit, it’s a 15-minute walk to the 20-bunk Pahautea Hut, built in 2015. It is well-sited on the sharp ridge, with excellent views of the rolling King Country to the south and west, while the toilets feature one of the best panoramas to the north-east, looking over seemingly endless Waikato farmland. There are also a number of campsites nestled in the forest with a cooking shelter.

We watched the sunset over the crook of the aptly-named The Cone, the sky blazing red and thunder clouds booming as they approached from the south.

The Mahaukura Track gently descends a ridge before again climbing to reach Mahaukura peak in the Pirongia pattern of descent and ascent which continues for two hours. The trail finally climbs one last time to reach Wharaura peak before the descent begins in earnest. At first, there is a steep rocky outcrop which requires a chain to descend, followed by a muddy scramble through the forest for 30 minutes, before the incline levels out, the forest opens up, and it’s a pleasant stroll back to the car park.