Climbing from the shore of Lake Wakatipu and over the Hector Mountains, the trip to Lake Hope is a classic alpine adventure, just a short drive from Queenstown

From the car park just north of Wye Creek, climb up a 4WD farm track on Loch Linnhe Station, which soon reaches 1100m with panoramic views of Lake Wakatipu, the Eyre Mountains and Queenstown.

Occasional cairns indicated a rising traverse into Two Mile Creek and eventually this opened out into a beautiful snow-covered basin (and we were there in summer). We crossed the creek to have a bite to eat at characterful Two Mile Hut. This stone hut was built around the turn of the 20th century and has seen multiple restorations. It’s housed musterers, trampers, climbers and ski-tourers. It would make a great day trip or overnight destination in itself, but I also made a mental note to come back during winter with my skis.

We pushed on to Skingut Pass (marked as Pt1659 on the map) and began a slow traversing descent into Wye Creek South Branch. Fantastic views down valley couldn’t be enjoyed whilst moving, due to knee and sometimes thigh, deep snow spread over the boulder-strewn ground. By the time we reached the creek and were looking for the bivvy site mentioned in Moir’s Guide North, we were thinking about dinner. Despite our map reading and GPS use, the bivvy site was nowhere to be found and a quick search up valley revealed nothing better than the boggy, flat ground we’d already identified as being a passable tent site. Cold, we set up camp and warmed ourselves with curries and hot chocolates doused with rum. 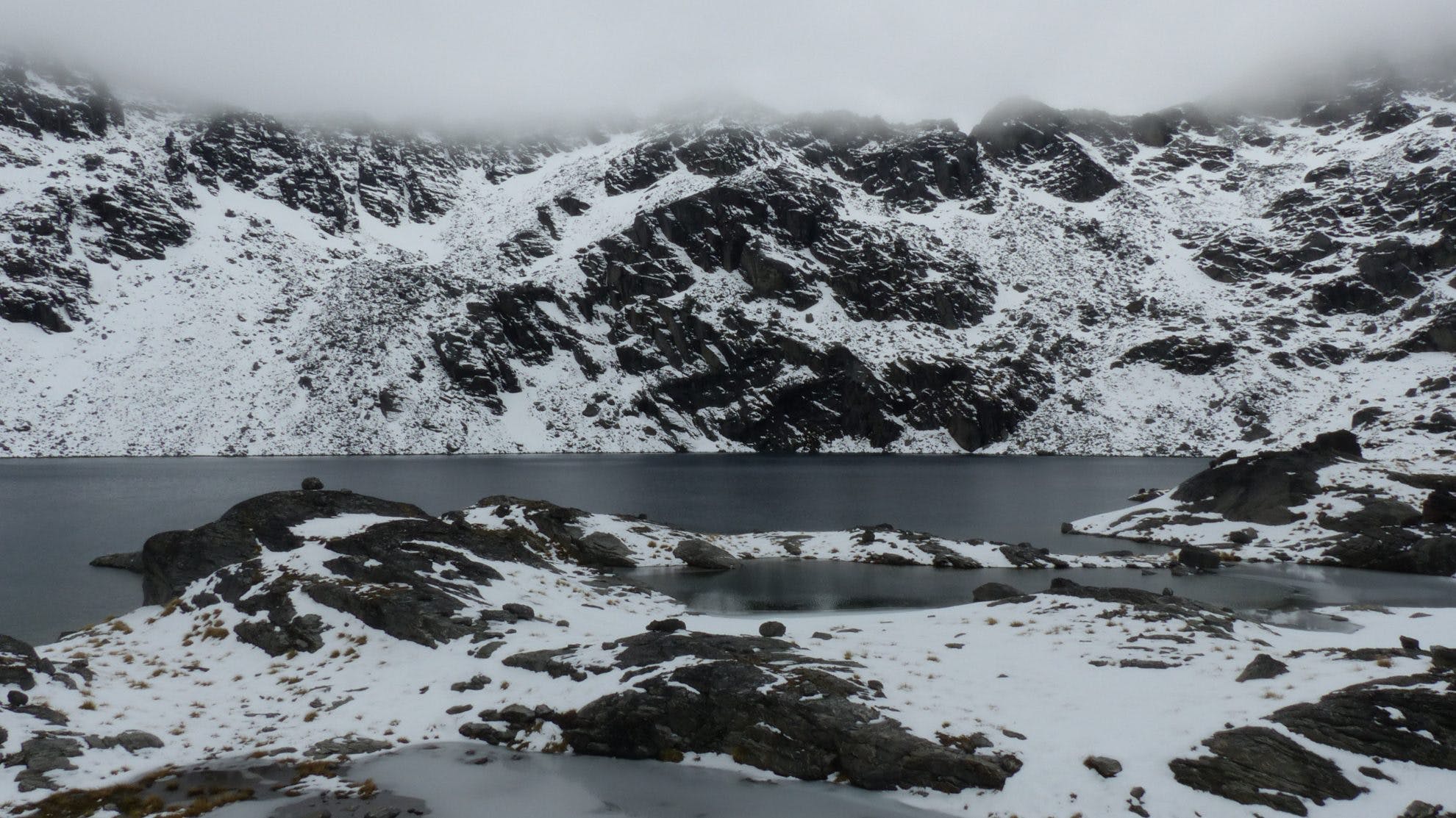 The next morning we stashed most of our gear beneath a boulder and ventured to our intended destination – Lake Hope, at 1800m. Taking the more direct route, directly north up a gully that left the South Wye at around 1580m, rather than following South Wye Creek the whole way, meant we were there in less than an hour, despite some more tricky travel in the snow.

Cloud hung low over the alpine lake, making for a dark and brooding scene, rather than the bluebird scene I’d envisaged. Retreating cautiously back to our packs and fuelled by Christmas cake, we followed the true left of the South Wye. Folded schist tors with quartz vein marbling and the green algae (which appears red) of trentopohlia provided visual interest. Further downstream, cairns illustrated opportune crossings of the creek and our snow-sodden boots received further drenching.

After lunch amongst the speargrass, we joined the rough-cut climbers’ trail for the final descent down to Wye Creek, which requires careful footing in places and concentration to stay on track. A knee-trembling, but quick, descent found us walking beneath climbers on rock routes and along the old pipeline walkway which leads to the DOC track and back down to our vehicles.