Access
From Waiuta, 21km south of Reefton or from Inangahua Suspension Bridge, off SH 7, 11km east of Reefton

A 1931 advertisement in The Dominion newspaper inviting readers to invest in Big River Goldmines Limited, described it as ‘a worthwhile speculation’. This was somewhat of an understatement. Although it was one of the smaller mines in the Inangahua field, Big River was one of the richest in terms of returns to shareholders. Between 1907 and 1924, when the mine was most profitable, they received their initial investment back 188 times over.

Intensive mining started at Big River in 1882 and operated for 60 years. This isolated environment, 30km along a difficult road from Reefton, was home to more than 100 people at its zenith. The mine closed in 1942, but the fascinating relics around its site are still a major attraction. An increasing number of people go to see them via the Waiuta-Inangahua track system.

We began our two-day walk at Waiuta, thus avoiding a steep climb from Deep Creek in the opposite direction. Initial scrub gave way to beech forest as the well-graded, benched track sidled the hillsides through quintinia, kamahi and southern rata for two hours, before reaching a low saddle (740m). Here it zigzagged down to Sunderland Creek, an area pervaded by impressive cascades of moss and tannin-stained water. We explored the scant remains of the St George and Big River South Mines on two short, poorly-marked side-tracks before crossing the creek and climbing about 80m to the ridge-top. From here, the track meandered down to an area of swampy land, with its wonderful feeling of openness. The reddish-brown  scrub was alive with flowers, and our progress was assisted by extensive boardwalks. The track then dropped briefly through a wooded valley to Big River Hut.

The hut sits on a grassy hilltop studded with sun orchids. From this vantage point, we could see the remains of various mine buildings and structures, plus remnants of associated settlement, that are significant parts of the Big River cultural landscape. About half of them fall within the Big River Ecological Area and the rest within the Victoria Conservation Park. Many are protected by the Historic Places Act.

It is an enticing area to explore, and doing so easily occupied the afternoon. The restored poppet head sits atop a 602m main shaft. Below, in its own specially-rebuilt shed, lies the winding engine, with its bricked-in boilers. Both are of national significance. Chimney stacks, pelton wheels, cableway turnstiles, stampers, cyanide tanks, water pipes and derelict huts all warrant investigation. A one-hour diversion up the valley leads to the Big River dam.

If the walk from Waiuta was an easy stroll, the continuation to the Inangahua River was somewhat more demanding. From the poppet head, we descended gradually to the Big River sawmill, site of an even older winding engine. An old tramway led past a series of coal-mines, before a relatively steep climb followed by a rapid descent into Deep Creek. Once on the flat, a bridge enabled easy access to the Golden Lead Stamper Battery. This 10-head stamper was erected in 1891 and is one of the best-preserved in the park.

Half an hour down Deep Creek, we crossed a swingbridge to the Cumberland Battery site. If the river had been  low, we would have preferred to follow the bed and terraces to the confluence with the Inangahua River, but wet weather forced us to take the alternative route, full of ups and downs. The final section, along the old Progress Water Race Track to the suspension bridge, contained hundreds of steps.

A trip to Big River is a worthy investment of time and effort. Not only can you traverse some delightful country, but you can also fossick amongst a rich assemblage of derelict machinery and workings from our pioneering past. Along with its relics, Big River has an air of mystery worth retaining. 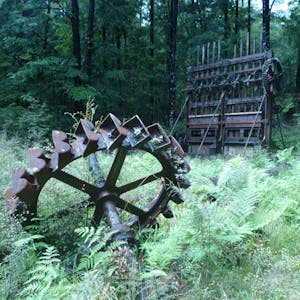 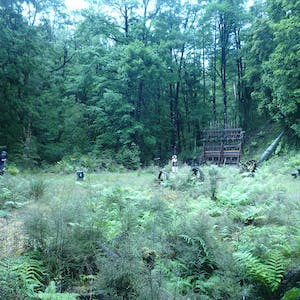 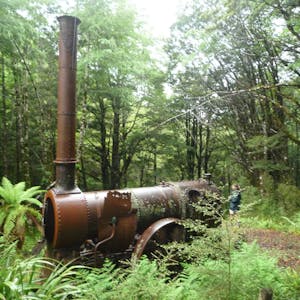