Key Summit is one of the most popular day walks in Fiordland. It offers 360-degree panoramic views over Fiordland mountains and alpine lakes. Not many realise that an unmarked track continues along the ridge to reveal even more amazing scenery and also to provide access to McKellar Hut in the Greenstone Valley.

I’d wanted to do this route for a long time, but it was two years before my friend, Liz, who had promised to show me the way, was able to join me.

We parked at The Divide, the western starting point for the Routeburn, Greenstone and Caples tracks and marched, to the accompaniment of tomtits, bellbirds and fantails, up the well-trodden track to Key Summit. As we emerged above the bushline, the view of the Hollyford Valley opened before us.

The track is always busy and this time was no exception. We were amongst a continuous two-way stream of people.

The DOC track ends at the Lake Marian lookout, where most hikers stop, but we continued along the ridge following an unmarked, yet clearly visible route.  It was easy walking, mostly open grassland and climbing a gentle slope. Our path led us past alpine tarns and bogs.

We came to a patch of bush with a range of native vegetation: beech forest, sub-alpine shrubs and grasses. In response to harsh conditions at this altitude, the beech trees had stunted growth and their gnarly limbs were insulated with cushions of rust-coloured mosses. We walked amongst hebes, tussocks, grasses and Spaniards. We saw a kea, a New Zealand pipit, seagulls, several types of native orchids and lots of mountain daisies.

As we moved south, the views became more spectacular. On our left, first Lake Howden, then Lake McKellar came into view with McKellar Saddle (the highest point on the Caples Track) above it. On our right, Lake Gunn and Lake Fergus were in full view. From our vantage, we could see the Hollyford, Routeburn, Caples and Greenstone Tracks.

About midday we come to several pretty tarns snuggled in a dip between two rocky humps. A sheltered beach on the bank of the largest tarn was a perfect lunch spot.

We continued our trip straight up the rocky hump that sheltered us from the wind. From its top we could see McKellar Hut. It was tempting to walk straight down what seemed the shortest route to the hut. But we were in the mountains, walking along a ridge with near-vertical drops on both sides, and though it was a clear day, a sudden change in weather could turn it into a dangerous place.

I’ve heard stories of people getting bluffed-out trying to find a shortcut to McKellar Hut. Liz mentioned how, on her previous trip, she had beautiful weather to start with and then a thick fog came out of nowhere, reducing visibility to a few metres. But she managed to find her way down.

So, I followed her, comforted by the thought that if she’d found her way in the mist, she would have no problem on a clear day. We carried on to the highest point on the ridge, Pt1543m, before sidling down to a saddle between the source of Cascade Creek, which drains west to the Eglinton River, and Duck Creek, which flows east into Lake McKellar.

We followed the spur that runs parallel to Duck Creek, walking straight down until we came to the bush line where an orange triangle marked the beginning of the track to the hut. Being back on a well-defined track gave us new energy, as we knew the hut was near and with it a hot cup of tea and food. But first we had to descend what seemed like a very long and gnarly staircase – steep and hard on our knees.

After eight hours of walking we reached McKellar Hut. The others in the hut had come from either end of the Greenstone Track. We were the only two who reached the hut from Key Summit.

Walking out the next day was easy, though in three hours we covered bits of three well-known tracks. We followed the shore of Lake McKellar on the Greenstone Track to where it meets the Caples. We then continued on the Caples Track to Lake Howden. At Lake Howden Hut we joined the Routeburn Track which climbs up towards Key Summit and down to The Divide.

This tramp proved every bit as spectacular as I expected, but I was glad I had a guide to show me a safe way down from the tops. 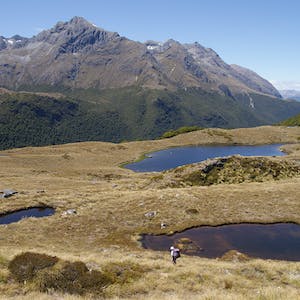 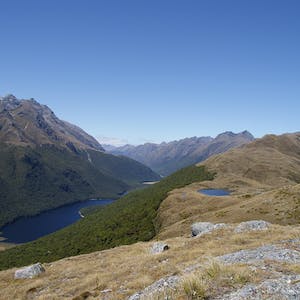 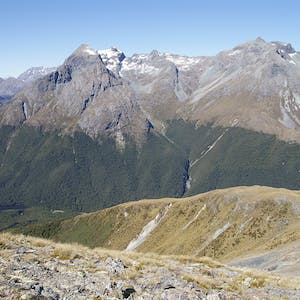 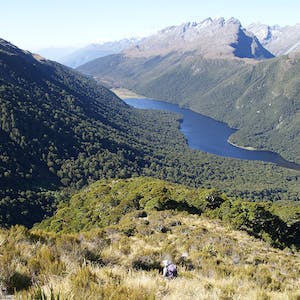