On a wild and windswept Wairarapa coast, the Tora Coastal Walk caters to those wanting food for the sole, writes David Hall

By the time the three days of the Tora Coastal Walk are completed, you’ll have done around 40km, only 11 of which could arguably be termed as being on the ‘flat’.

On the first day there are two memorable hills, one going straight up, the other a typical twisting farm track around the edges with the summit always around the next corner. If it rains, you’ll likely get very wet. If it blows, you’ll be treated to wind of quite unnerving ferocity.

So, why, I wondered as both rain and wind scythed in horizontally, would people pay for these outdoor pleasures, especially, when about an hour away are the Tararua Ranges where it is possible to become just as exhausted, to get even wetter, and be buffeted by genuinely frightening winds pretty much for free.

There must be an answer, because now, in its 18th year, there can be more than 1000 people a season walking all three days of Tora’s farm, beach and bush tracks. There were over 1700 in 2010-2011 following the walk’s organisers winning the Enterprising Rural Woman Award in 2009. Such active interest sets the walk as amongst the most popular in the country, certainly the North Island. Most walkers do it in groups, both men and women, but most are women 50-plus and most are New Zealanders.

It’s easy to say that Tora’s popularity is the overnight accommodation and, of course, the food – neither of which can be dismissed for they are so far ahead of a singular trip in the Tararuas as to be laughable. But, on reflection, it’s a great deal more.

You walk with a light pack – with luggage going ahead – often in the company of like minded people. In our case, a group of young women from Australia and Wellington who were ‘doing the Tora’ before attending the much less exhausting World of Wearable Art festival in Wellington.

Most of the walk is over farms, generally accessible to only a very few. Much of this country, even that which is intensively cultivated, is extremely attractive. In Tora’s case, the view from a 350m hilltop is as emotively grand, if not as dramatic, as that from a southern peak of 10 times the height.

And you meet and can talk to the people who own and work the land.

The Tora Walk was started in 1995 by Jane Elworthy, mother of James, who, with his wife Kiri, took over the walk’s operation in 1999 and now run it with business partners Jenny and Chris Bargh, who have been involved since the beginning. 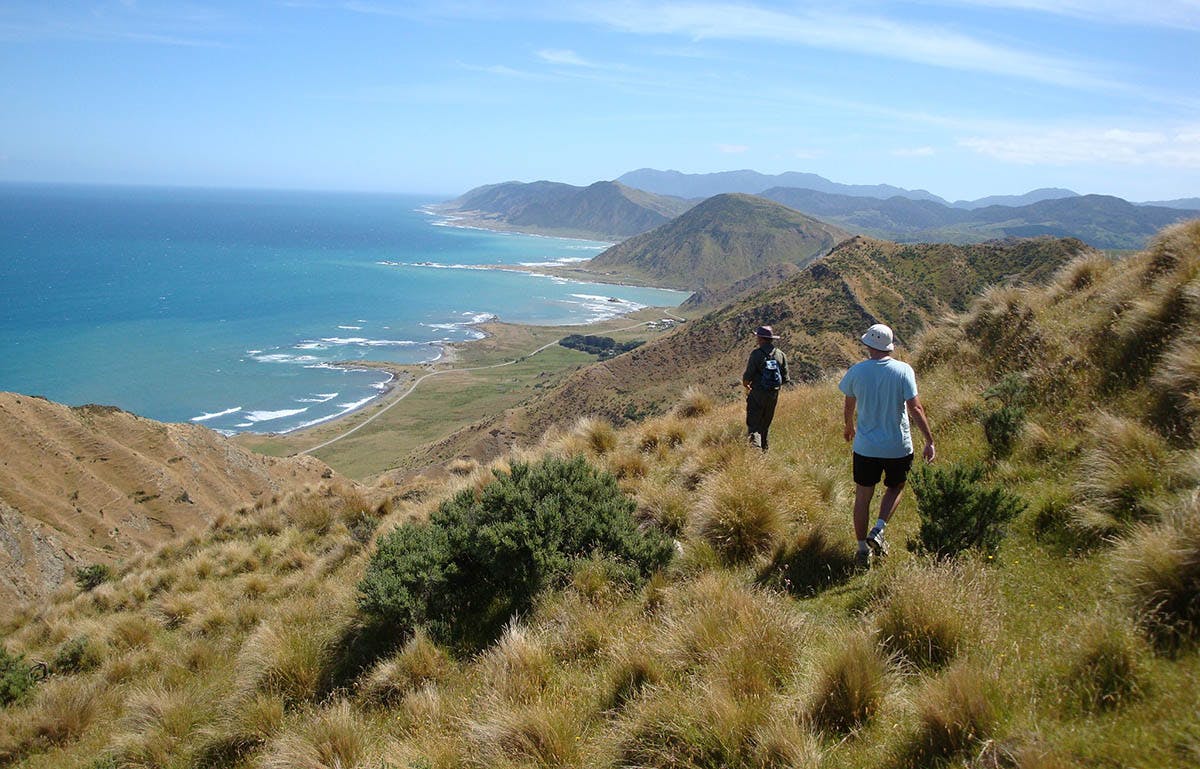 View from the Trig. Photo: Supplied

For an extension of a farming operation where some originally scoffed at the prospect of people paying to walk over farmland, it’s done rather well. The walk crosses a number of properties, but mostly it’s over three farms: Whakapata (650ha; Kiri and James Elworthy), Tora Station (480ha Bob, Alistair and Jenny Boyne) and Greentops (640ha; Jenny and Chris Bargh).

Tora’s first day, of 15.5-16km, is the longest and most strenuous. The track goes to the highest point of the walk – 359m – has the best all-around views and the two gnarliest hills.

It starts from Whakapata Cottage, the farm’s original homestead, where the first night is spent. Meals are a big part of the Tora Walk – they’ve even published a recipe book of favourite meals over the years, although mostly it’s now the same three main meals for each night on the track. “We have the advantage of being able to cook the same thing every night, so there is no excuse for imperfection,” says Kiri. We had barbecued venison that first night; not a bad start

After a breakfast of eggs, toast or cereal, and armed with a self-prepared lunch, it’s off for a six to seven hour day, starting gently, but soon enough heading uphill, over farm tracks, through patches of regrowth bush and along ridges with extensive rural views.

It’s about an hour to Blairlogie Junction, named after the Wairarapa area in which Jane Elworthy grew up. The uphill trek begins here and continues beyond the Misery Yards with a long slog up Limestone Hill to the trig at 359m and the first view of the sea and coast.

Shortly after, the track descends through a stand of mostly regenerated bush. If it’s been raining it can be very slippery through here, and, although trainers and walking sandals are deemed okay for summer, boots with good tread and ankle support are preferred.

Then, it’s across No Name Creek, past some old sheep yards to Tim’s Hill. Tim being a past shepherd whose monument will be indelibly scratched into our group’s memory as a rutted, wet, slippery, unforgiving trudge up and up. In summer, it would most likely be a breeze, but we were there in spring.

From the top there’s still a good distance to go and the valleys can squeeze some eye-watering winds up to the ridge tops – we were hit with some 80km/h gusts.

Mostly though, it’s sidling around hills until the final stretch which offers a choice between a steep bulldozed track with a fixed rope for those unsteady on their feet, or a longer less knee-jarring track down to the Awhea River and then along the coast to The Cookhouse for the second night. 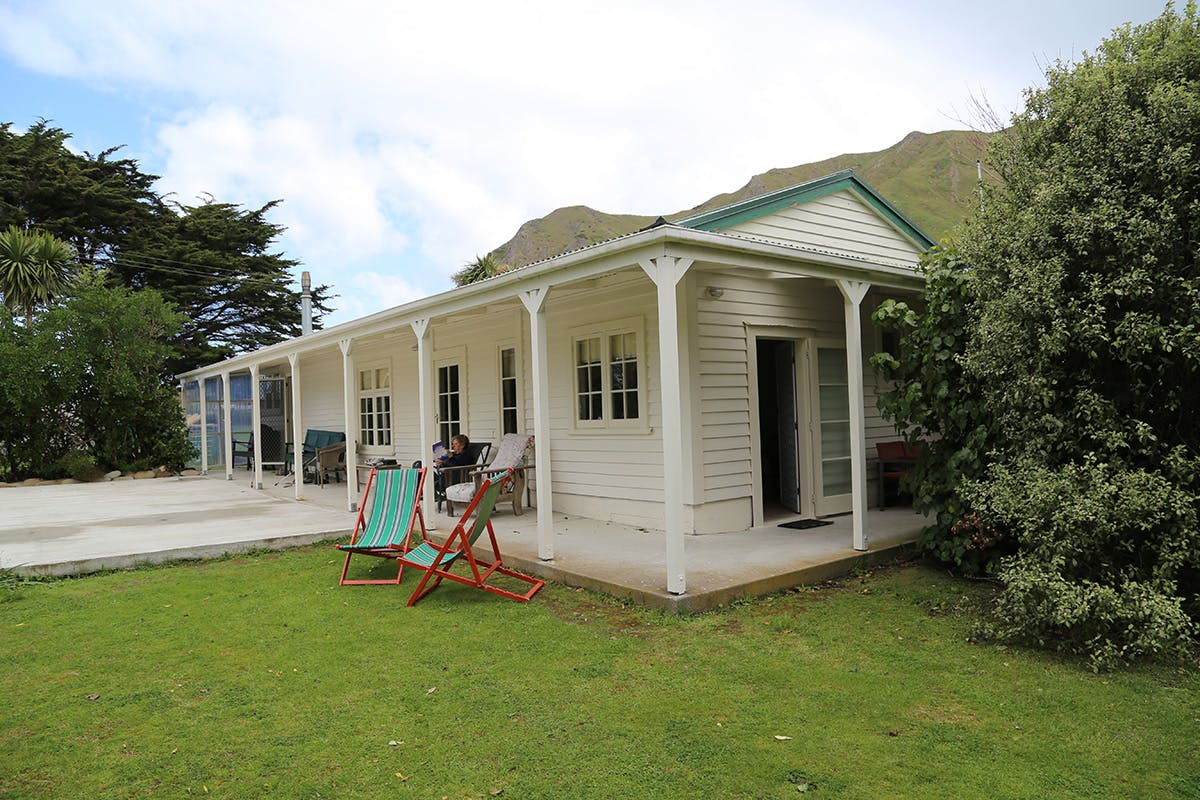 This is actually Jenny and Alistair Boyne’s house, but they moved out to a place just down the road during the walking season – and stayed.

Alistair’s dad Bob was balloted the farm after Second World War when the original 5417ha Tora Station was purchased by the government from the Riddiford family and split into 10 farms for returned servicemen. Unlike a lot of soldiers-turned-farmers, Bob stayed. He’s still alive, in his eighties, and Alistair and Jenny now run the farm.

Alistair’s a bit of a character, currently with dreadlocked hair, a sharp contrast to the short back and sides shown in his and Jenny’s wedding photo on The Cookhouse wall. He reckons “it keeps me looking young with the youngsters I play rugby with”.

Accommodation on the coast will change next year when a purpose-built lodge is completed just past the Awhea River. The Cookhouse will then revert to a homestay.

Dinner was freshly caught butterfish. It had been taken into Wellington for checking and weighing under the commercial fishing quota system, before being brought all the way back – about a four hour round trip.

The second day is either along the beach or the road to the renovated Shearer’s Quarters on Greentops Farm, at one time the northern boundary of the original Tora Station. It’s a three to four hour walk depending on whether you take in some of the diversions, such as the shipwrecked steamer Opua, which went aground in foggy conditions in October 1926, or the seals (all male according to Alistair) at Manurewa Point, a raw place of crushed and folded sedimentary rock. You might climb 301m to the trig for spectacular views up and down the coast or talk to Anne about her (almost) tropical garden fronting the windswept south-east Wairarapa coast.

Jenny and Chris Bargh have been at Greentops for 32 years, although the farm is now leased to their son Simon and his wife Amanda.

The Shearer’s Quarters’ is roomy and airy and Jenny cooks the most delicious roast lamb for dinner.

Chris is a mine of information about the area and illustrates the walk on a wall-sized aerial photograph.

The final day, a walk of around 13km, back to Whakapata Cottage was a highlight, even though a biting southerly forced horizontal rain through supposedly waterproof jackets.

To start, the track meanders alongside the Oterei River, with many tempting swimming holes and picnic spots, before heading up to a patch of bush which Chris fenced off 30 years ago. Here, it narrows to a meandering single file track, alongside which are over 50 labelled native plant species. It’s a real treat to walk through bush like this after the farm tracks.

We ignored the turn-off to The Bugler (255m), the highest point on this section, even though the views are said to be spectacular. It was hosing down and, out of the bush, blowing furiously so we carried on past some 70-80 year old kanuka before coming to a stand of dazzling kowhai in full yellow flower. What a sight. One tree had been swept away in a recent slip; others stood their ground, yellow flowers waving in the wind, temptresses for any passing tui or bellbird.

It was then an undulating farm track back to the road and eventually Whakapata Cottage.

We had a shower and a cup of tea before commencing the long drive back to Auckland which gave us ample time for reflection.

The conclusion was unanimous: would we do it again? Yes, at the drop of a hat, but we’d get ourselves a bit fitter and we’d wait until the weather had settled down.