Farmers around the country have found a new use for wild and rugged sections of their land and a willing supply of trampers prepared to pay for the priviledge of traipsing along rutted and slippery tracks, amidst sheep and cattle. David Hall experiences one such walk – the fully-catered Whareama Coastal Walk in the Wairarapa

We expected the hills, the weather and the views – as much inland as seaward – on the Whareama Coastal Walk but were surprised by the isolation. This patch of land is just a couple of hours from the capital, yet it might as well have been in another country.

The area covered by the walk, stretching from close to Riversdale in the south to Castlepoint in the north, is, to a townie, of questionable farming value lying mostly on its side, jutting, often sharply, upwards rather than lying flat. Yet it has been successfully farmed for more than 160 years – although Maori occupation is said to pre-date European by many hundreds more – and was amongst the first sections of land in the North Island to be settled for farming.

Not surprising, it has history with 100-year-old homesteads, the Ica Station woolshed claiming to be the oldest working woolshed in the country, stories of tough, uncompromising men and women and always the land, wrestled from native bush and forest remaining today distant, wild, buffeted, beautiful.

Farmhouses – homesteads – are few and far between, perhaps less surprising when the vast 2940ha Castlepoint Station, with its 12km of beachfront, and currently more than 30,000 sheep – ewes with lambs – is included.

Castlepoint, along with Golden Downs, Waiteko, Waierua, Cross Keys and Ica stations adjoin each other and each provides a section of Whareama Coastal Walk.

A combination of farms is not unusual in the country’s private walks, but Whareama offers one, two or three-day options and that does make it different.

“Our most popular walk is now the two-days. It can be done over a weekend, as people arrive on a Friday evening (after work) and are finished by mid-afternoon on the Sunday,” says Carmen Tredwell, who, with husband Dick started the Whareama Walk a couple of years ago.

The Tredwells are ex-UK soldiers who moved to New Zealand in July 2004 to buy a 34ha sheep and cattle property just up the road from Golden Downs Cottage, where walkers now stay on their first night.

They own and rent the cottage out to holidaymakers, but thought there could be a better use for it. They knew that other large stations in the Wairarapa – Tora, further south, being the shining example – had opened their land to walkers and had swapped previously inaccessible farm tracks from mud to money. These farmers turned tourist entrepreneurs had gone one step further, of course, and added two enticing words: ‘fully catered’. 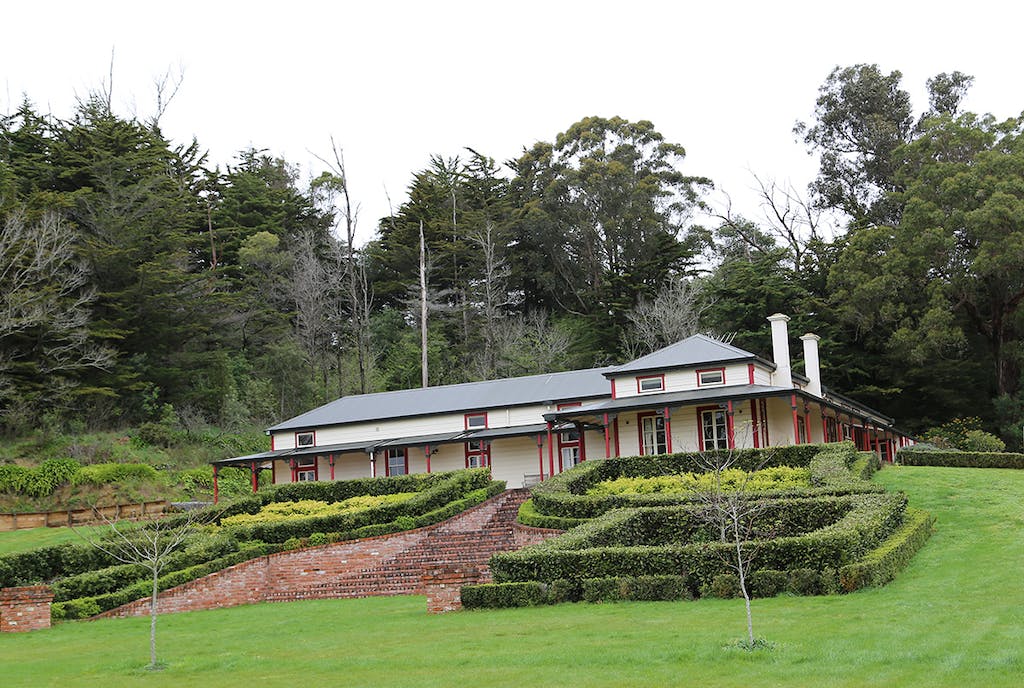 So, a couple of years ago Dick and Carmen put a proposal to their neighbours, six of whom signed on and the Whareama Coastal Walk began.

It follows the reasoning behind pretty much all private walks, which allow walkers access to privately-owned land, through some truly beautiful landscapes, without the need to carry hefty packs and, in summer, there’s possibly not even the need for boots. The key though is that all meals are supplied and prepared and some are genuine gourmet. You’ll mostly have to cook dinners – barbecues are popular – and make your own breakfast and lunch. Unlike with tramping though, the only food you’ll need to carry is lunch and snacks.

So, a day pack with room for water bottles and warm and wet weather gear is all that’s needed. Everything else – and that could be a suitcase of ‘essentials’ – is taken to the various overnight stops.

We opted for the two-day walk, but only managed one day of walking due to strong winds and the second highest dump of rain during September, which turned tracks into mudslides and brought streams and rivers close to bursting their banks.

Both two- and three-day walks start from the cottage following a well-marked trail, along farm tracks and by the Whareama River, to the Parson’s Landing beside the river, where there’s a long drop toilet and a shelter in which to enjoy a cuppa, if it’s raining. It’s close on 6km from the cottage and should be fondly remembered as it’s the easiest part of the day.

From here, there’s a short road section before the track turns uphill for the toughest bit which heads straight up a poplar and willow-shaded gulley to about 224m.

There are wonderful inland and coastal views here, not on our mist-shrouded day though, but we’ve seen the summer photos. Inland there are some rolling hills, but it’s mostly a vista of sharp steep sided ridges. One can only wonder what the place was like before the farmers came along, and the determination they must have had to turn those hills into productive pasture.

From here, it’s downhill to the Wairarapa’s east coast along mostly well-formed tracks on Cross Keys farm. We met the farmer, Wyc Gimson along the way. He seemed delighted with what was looking to be a good lambing season, notwithstanding the rain, chill and mist during our visit.

At the coast, the track turns northerly and, for a while, goes along hard ground above the beach. But eventually, you’re on the sand for around 3km and it can be hard yacker, especially after the previous hours up and down hills.

At the end of the beach section though, either Dick or Carmen will be on hand to transport walkers to the overnight accommodation at Wai Ngaio Retreat – originally a hunting and fishing lodge that now sleeps 20. Those with a vicious bent can eshew the ride and walk a further 5km uphill to the lodge.

Here, a meal awaits and it can be three course, plus a glass or two of wine if you’ve sent that on ahead with your luggage. We had a barbecue (sausages, steak, chops) one night and lasagne another, plus ice cream and cheese. Absolutely better after a six hour walk than ‘slaving’ over a straining hut stove. 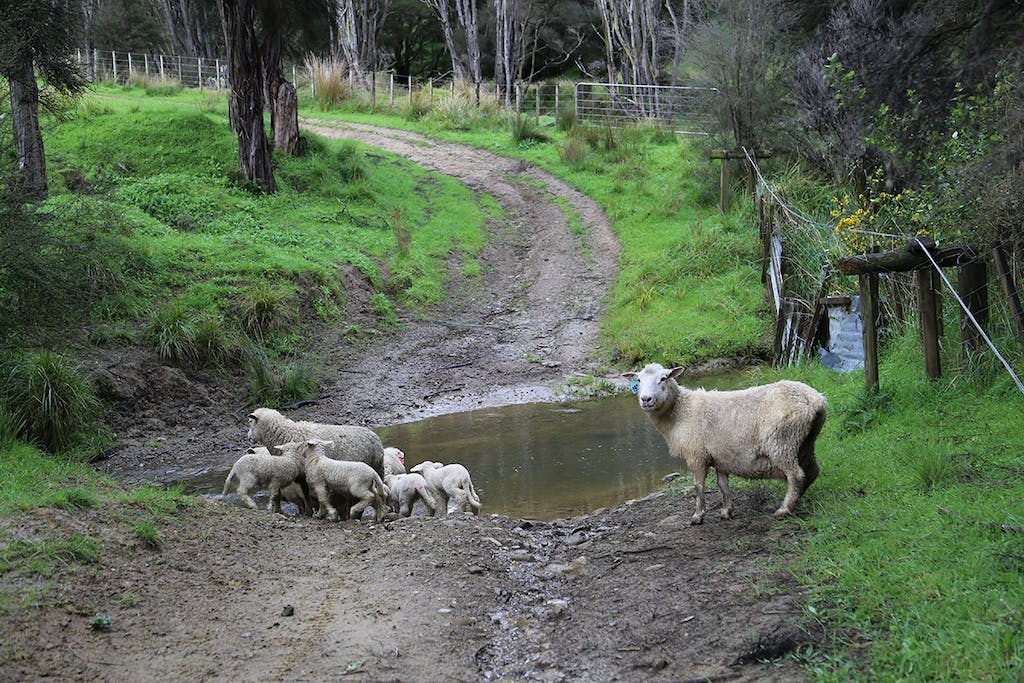 Sheep, of which there are plenty. Photo: David Hall

The lodge is on Castlepoint Station and has been refurbished to luxury standard by the station’s owners, Emily and Anders Crofoot. They’re Americans who have combined a long-standing love of the land with a firm grasp of technology to wrestle the station into a multi-million dollar, tightly managed, computerised business. The shepherds still use horses though.

The second day was a walking write-off for us, being way too wet and slippery, but we did cover pretty much all of it on a four-wheeled farmbike.

The track begins at the Retreat and heads immediately uphill to the highest point on the walk – 329m – where there are expansive views including, along the coast, to Castle Rock (162m). The track stays high on ridges, although it’s angling downhill nearly all the way – about 14km – to Ica Station homestead. It’s undulating though and there is another calf-stretching uphill section before the Ica woolshed – so a fair way from totally downhill. It often goes through regenerating bush and there’s three stream crossings, over which Dick has built bridges, or which can be waded.

On a fine day, it would be a lovely farmland walk and, in spring, there are lambs bouncing around everywhere.

Eventually, after about 10km, the 100-year old Ica Station woolshed is reached. It’s then only a short – flat – distance past the Ica homestead and historic India House cottage, to either cross the Whareama River or walk through a wooded area to the road and then to Golden Downs Cottage, about 14km from where the track started.

Then perhaps a shower and cup of tea before heading home from a weekend enjoyably spent, maybe not in the furthest reaches of wilderness but certainly in a raw, isolated and memorable place.