At first I couldn’t believe the reports: There had been an attempted lynching on the slopes of Mt Everest!

I was already glued to my computer, waiting for news on a good friend who was battling to stay alive on another mountain in Nepal. Scott Blackford-Scheele was part of a New Zealand team attempting the previously unclimbed Anidesha Chuli (6800m) near Jannu, and had taken a bad fall during a summit push with Ben Dare. Ben had managed to get Scott to their high camp, and was later joined by other team members Rob Frost and Andrei van Dusschoten who had climbed through the night to reach them. With Scott suffering from a serious head knock, he and Ben were airlifted to a hospital in Kathmandu. The story made national news in New Zealand, and Ben was rightly hailed a hero for getting his climbing partner down to safety.

While I was anxiously awaiting an update on Scott’s condition, reports started filtering through the media of a major bust up on Everest. Apparently, three European climbers had an altercation with a team of Nepalese Sherpas on the Lhotse Face, and were then assaulted by a large group of Sherpas at camp.

I had a number of friends working and climbing on Everest this season so followed the unfolding story with growing concern. And while much of the mainstream and social media coverage could only be described as a frenzy of allegations and denials, I tried to filter through the supposition to work out what actually happened and why.

The three westerners involved were high profile climbers Ueli Steck from Switzerland and Simone Moro from Italy, along with Briton Jon Griffith. They had been soloing the steep snow and ice slope between Camp 2 and 3, at around 7000m. At the same time, a team of Sherpas was laying fixed lines for the commercial guiding companies who needed them if their paying clients were to have any chance of reaching the summit.

As the trio crossed over these ropes on the way to their tent at Camp 3, a disagreement or argument broke out. The Sherpas later claimed that one of them had been hit by ice dislodged by the westerners, an allegation denied by the trio. Later, when Steck, Moro and Griffith returned to Camp 2, a much larger group of Sherpas (estimates are between 50 and 100) reportedly attacked them, punching and kicking them and throwing rocks. Other foreign climbers intervened (as did some Sherpas, I have since been told), trying to calm the situation enough so that the three could escape through the Khumbu icefall to the base camp further down the mountain.

Whether it be resentment, jealousy, competition, greed or a lack of cultural understanding, differing factors can motivate anger and violence

This sounds like utter madness on the slopes of the world’s highest mountain. It’s hard enough trying to stay safe in such an extreme alpine environment without adding physical confrontation. The contrast between this and what my mates on Anidesha Chuli had been through couldn’t be greater.

Is there any way to make sense of this serious, and by all accounts near-death, altercation? The three climbers involved have stated their very scary experience, with Ueli Steck believing he would have died if others – including New Zealand’s Marty Schmidt – hadn’t intervened, while some westerners have attempted to portray the Sherpas’ side to the story. And then plenty of other climbers and non-climbers have offered comments and viewpoints over why this might have occurred, who’s been slighted and perceived implications.

I’ve had personal contact with some of my friends who were there, but they are trying to keep their heads down in the aftermath. As part of commercial guiding teams, they have to keep working with their Sherpas and working for their clients. I don’t want to single them out in this delicate and complicated situation, so will focus on more generally known, or reported, facts and issues.

Ed Hillary would likely be rolling in his grave. He was never a fan of Everest being guided, and would no doubt be raising those bushy eyebrows at how cumbersome the whole business has become. One busy day last year saw more than 200 people summit. The guiding companies charge large sums – upwards of $50,000 – for an attempt on the mountain the Nepalese call Chomolongma. But the fact remains, people want to climb it, and where there’s demand….

New Zealanders have been involved in guiding Everest for a number of years, and this year was no exception. Along with Schmidt, Lydia Bradey (the first woman and first New Zealander to summit Everest without supplementary oxygen) was hoping to reach the top for the third time while guiding for Wanaka-based Adventure Consultants, while Mike Roberts was going for his seventh successful ascent, and Dean Staples and Mark Woodward were trying for their ninth.

And intrinsic to this commercial operation are the Sherpas. Until the early 1950s, no high Himalayan peak in Nepal had ever been climbed. But as an insatiable desire for the high summits developed – especially for Everest – the Sherpas were seen and used as local labour by the visiting climbers. This relationship has developed greatly, some would say into something more evenly footed, but others would disagree. At any rate, the inexplicable passion among a small, wealthy European elite for exploring the mountains of the Sherpa homeland, together with the Sherpas’ ability to cope with altitude, gave these people a chance to escape difficult lives herding yaks or carrying loads for traders. 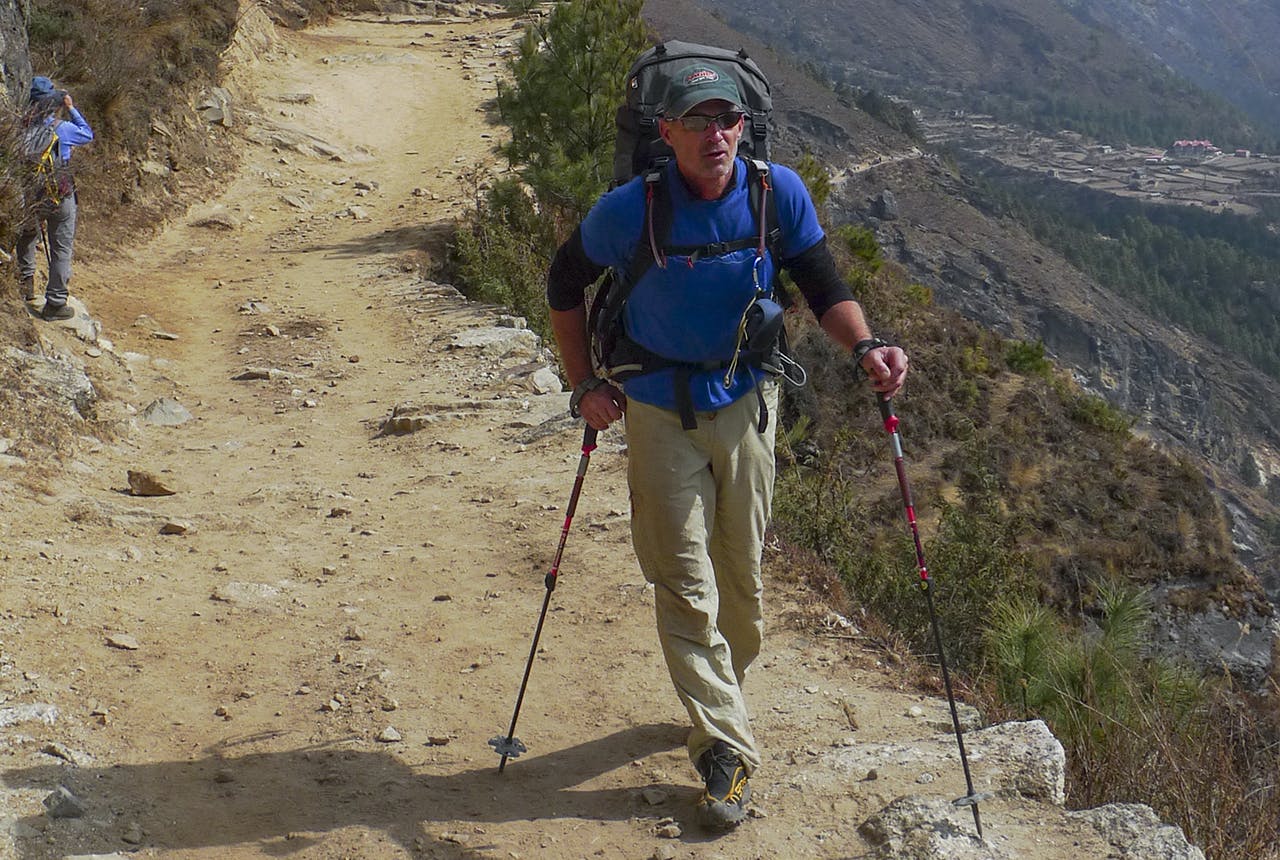 Marty Schmidt helped break up the fight, saying everyone needs to work together to make Everest safe for all. Photo: Supplied

For Sherpas and foreign guides, the job of establishing and fixing a route up Everest can be described as a tense work situation. They toil long hours together or beside each other. The stakes are high. They need to establish a safe route over difficult terrain for hundreds of climbers and guided clients. Arguments happen, as they do in most workplaces – among the westerners, among Sherpas, and occasionally between Sherpas and westerners. The Sherpas are fiercely loyal (they are often related to each other), and they have a keen sense of fairness. According to Adventure Consultants’ boss Guy Cotter, there have been altercations between teams and their Sherpas before, but none as public as this one. “The climbing season on Everest, by nature, is a time of high stress where everybody has a lot at stake,” he says. “People of different nationalities are forced to work together in pressure-cooker situations and this brings out the best and worst in them.”

It is easy to point the finger at the commercialisation of Everest and blame the big guiding companies for bringing this onto the local communities. But if you take the mountain away, this type of conflict exists in other tourism activities where tourists from developed countries recreate in less developed countries. Another example I have experienced is surfing in Indonesia. In recent years the number of altercations between foreigners and locals has greatly increased over what is, essentially, a limited resource. Whether it be resentment, jealousy, competition, greed or a lack of cultural understanding, differing factors can motivate individuals or groups into anger and violence.

Yes, climbing Everest is big money to the guiding companies, the Sherpas and the Nepalese Government. After the major bust-up, the government moved quickly to quell any ongoing problems. Meetings were organised, agreements signed and handshakes offered. Pledges were made to consider everyone’s position, while at the same time trying to move on from the incident as smoothly as possible.

So, is this recent event going to change things on Everest? Probably not, according to Cotter. “Even though it’s been almost universally banned as a subject that can be discussed, different nationalities react differently to different challenges and this situation is a prime example,” he says. “At the end of the day, it proves once again that a bit of respect goes a long way when dealing with others and we should be even more cognizant of this in situations with other cultures in their own homeland.”

I’ll leave the final words to Marty Schmidt, who blogged this after the incident: ‘No matter what is talked about in the media, this powerful place will always be filled with a peaceful, inner solace for every human being to experience. It calls many people to its base, from trekkers to fly-by sight-seers to us mountaineers…. This is Chomolongma, the goddess mother of this earth. There is a total respect toward these mountains surrounding us every day. Us climbers are in harmony with what we are called to do and have great respect for the Sherpa climbers. This relationship will always be worked on and will always be improved with a non ego approach and with total respect from both sides.

‘On this mountain, we all need to work together to make it a safe and successful climb for everyone every year.’