Forget Verona and Gretna Green.  There’s a backcountry hut in Kahurangi National Park with as touching a love story as any work of Shakespeare

The world of literature has Romeo and Juliet and the music world has Johnny Cash and June Carter, and even New Zealand’s tramping fraternity has its own classic love story – only it’s far more low key and somewhat bizarre. And what’s more, anyone can pay homage to the fascinating couple who played out this piece of history. You can visit their home, sit in their chairs and sleep in their bedroom. You can experience for yourself the old wood smell and the wind sneaking into the dark, cosy cottage Henry and Annie Chaffey called home for nearly 40 years.

The couple both fled failed marriages in Timaru – Annie from an abusive husband – and chose to ‘get away from it all’, which they did to an extent few would dare.

They met again in Motueka in 1913 before disappearing into the Upper Takaka Valley in what is now Kahurangi National Park. They set up home in Asbestos Cottage – a basic two-room hut, built initially as a shelter for miners searching for asbestos in the area. And there they stayed for the next 37 years.

Only through visiting the cottage for yourself can you appreciate what an extraordinary feat this was. The quickest way there is up the narrow Cobb Dam Road, winding its way along the side of a steep hill 20km from the tiny community of Upper Takaka. From there it’s another 90-minute walk along an old miner’s track then up a rocky forest path to the tiny wooden building surrounded by forest.

Without transport, bringing in supplies would have been slow and painful. But it gets worse – when they first moved in, there was no road from Upper Takaka. The only way in was via Flora Saddle – a 900m climb from the Motueka Valley followed by a 15km hike down Flora Stream to Takaka River. 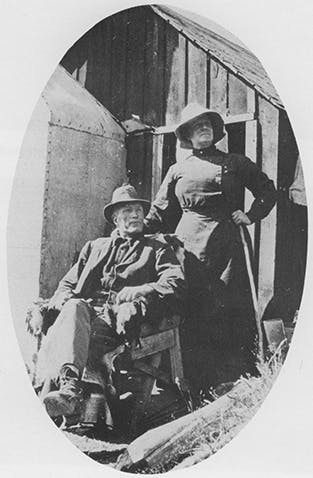 Henry and Annie Chaffey outside their cottage. Photo: Supplied

Annie stayed at the cottage while Henry regularly made the long trip to civilisation for supplies. He would carry a huge swag and a pile of sticks under a waterproof sheet. He continued to carry heavy loads until the day he died. The final load never made it to the cottage, as he fell in the snow on his way home. He was 83 and Annie couldn’t survive there by herself. She returned to Timaru, but couldn’t adjust to life away from Henry and the cottage, and took her own life two years later.

Despite the tragic end, the story is one of inspiration. Both had the mental toughness to escape unhappy lives and only needed each other and this simple, dingy cottage for a lifetime of happiness.

When you duck in through the camouflaged door, you realise how basic an existence it must have been. The cottage is very small with an oversized fireplace that looks more like a pizza oven. The smell reminds you of a museum – an old, lived-in blend of wood and fabric that has been damp for many years. Three uncomfortable-looking wooden chairs, partly covered in sacks and stuffing, sit in the middle of the room. A small window offers just enough light to read a newspaper and, next to this, sits a stained sink and a crooked shelf with several dark pans.

The next room, less than half the size of the first, contains four bunk beds and little else. The walls and ceiling are still partly covered with some of the newspapers the Chaffeys used as wallpaper, though they are now faded, peeling and the same brown colour as treasure maps.

The cottage was restored in the late 1990s by Takaka carpenter Gregor Koolen, who went to great lengths to ensure it is as historically accurate as possible. And while the structure of the building and the layout of the rooms are almost exactly the same as when the Chaffeys lived here, the walls of the living room are much like a small museum. There are pictures of Annie and Henry, a framed letter written by Annie in 1947, information cards talking of their lives and mining tools, such as a cobbling plate and soldering iron, which were found either in the fireplace or the drainage trench.

Outside the cottage is an overgrown but beautiful meadow surrounded by trees. Bellbirds sing and a stream gurgles. There are still blackberry and gooseberry bushes from the garden Henry and Annie struggled to maintain up here (not much would grow at more than 800m above sea level). Above the trees at the front of the cottage pokes the grey summit of Hoary Head and to the left winds the Takaka River – the interlocking spurs blocking a view down to the flats.

DOC encourages trampers to stay at the cottage and revel in the history. But any amount of firewood, magazines and comfy mattresses can only pale in comparison to the welcome you would have received when the Chaffeys lived here – that is provided you remembered to shout before entering.

Around 15 minutes before reaching the cottage a big sign read “If visiting Asbestos Cottage, call out here”.  Fail to do so and you would be greeted with dagger stares. But obey the sign and by the time you reached the cottage your hosts would be dressed in their Sunday best, both wearing hats and Annie in Edwardian dress.

They would treat you to biscuits and a hot cup of tea. They would cook you meals and, when you left, they would leave a treat in your bag as a way of saying thank you for taking the effort to visit. It might be a cigar, some biscuits, a jar of home-made jam or a bottle of home brew.

The accounts of those who visited the Chaffeys say the couple had strict routines – baking was only done on a Tuesday and they always went to sleep at 10.30pm. But they were friendly people who seemed genuinely content with their lives so far removed from others.

And their story has fascinated those intrigued by a tale of overcoming hardship and isolation and those immersed by the romance of disappearing into the hills.

Look through the visitor book in the hut and you’ll see that on April 18th 2011 Scotty and Melis got engaged in this very place. Perhaps in years to come this lonely cottage will be the spot trampers across the country choose to propose to their partners and maybe this unlikely love nest will host more tales of happiness.