There’s mist in the forest, but the winter sun makes a valiant effort to pierce the gloom. During the cold months, cloud often covers Lake Te Anau like a blanket, with only the tops above in the naked sunshine.

We’re hoping this is the case today, as six of us trudge up the well-formed Kepler Track towards Luxmore Hut. Southerners David Barnes and Barry Flamanck are hosting four northerners: John Rhodes, Jason Roxburgh, Darryn Pegram and me.

Last time I was on the track, back in February 1989, it was only a year or so old, and still bore the raw marks of recent construction. Almost a quarter of a century on, fern and moss soften the edges of the track, which is now well bedded into the landscape.

David, a stalwart of the Otago Tramping and Mountaineering Club, is a veteran of several winter Kepler tramps and has tempted us south with the idea of snowshoeing the Great Walk. Although the tops can pose an avalanche risk, we’re reasonably confident that conditions have settled after the most recent snowfall. There’s no evidence of sliding in the surrounding mountains.

The sun finally penetrates the forest, and we emerge, blinking, into the blinding sun of the tops. Cloud still obscures Lake Te Anau, sulking in gloom below. Snow-capped mountains rise all around us: Fiordland’s vast expanse, the Eyre and Takitimu Mountains, and even a distant Mt Earnslaw. The snow proves deep, dry and soft, and we don snowshoes immediately. Even then, we’re still sinking in about 30 centimetres.

After a steady plod to Luxmore Hut, we find just two occupants: a Frenchman who has slogged his way without snowshoes from Iris Burn Hut, spending an enforced night at a shelter on the way, and a German tramper, Julius, who followed us up from Brod Bay.

That evening, the moon illuminates the snow and soft pastels fall away to shadows in the dark forest below. When dawn comes we’re again above the low-lying cloud. Under such conditions you can’t help feeling smug to be in the mountains; reinforced by a text messaged weather forecast that’s perfect for Fiordland, but miserable for everywhere else. Our southerners crow delightedly at the news.

In the morning, the party splits. Barry must head out, and Jason decides to go too. At nearly two metres tall, Jason’s weight means he’s sinking in half a metre, even with snowshoes. He’ll walk in and meet us at Moturau Hut for the third night. The remaining four head on. Although cold, it’s breathlessly calm, and the snowshoes are excellent.

Pretty soon we’re aware that Julius intends to follow. We’re convinced he’s made this decision only because we’re going on; otherwise he too would have headed back out. Normally that would pose no problem, but Julius has no ice axe, snowshoes, gaiters, sunglasses or sunscreen. We reckon even with snowshoes we’re facing at least six hours in deep snow along the tops. Winter daylight is limited; we’re only a few weeks past the year’s shortest day. How will Julius cope floundering up to his waist?

We hope our rapid progress will discourage him, but it doesn’t. By the time four of us have trampled down the snow, he’s sinking in much less than he otherwise would, and toils along behind us. Beneath Mt Luxmore, the track sidles above bluffs. In summer this is an easy section of benched track, but now we’re instead edging over a snow slope, using our ice axes. With the determination and naivety of youth, Julius seems oblivious of the risk. Concerned, Darryn and John dump their packs, and return to him. They politely try to convince him to turn back, but he equally politely declines. So they lend him an ice axe for the steeper section, and later a walking pole. Soon we’re well ahead, but we keep an eye on him.

Julius catches us while we’re having a snack at the Forest Burn Shelter. His boots have filled with snow and his lower trousers are choked with frozen ice. The sun begins its rapid dip back towards the horizon, and daylight is at a premium. How much responsibility do we have for the young German tramper, who is slowly but surely becoming exhausted? It’s a nagging concern. 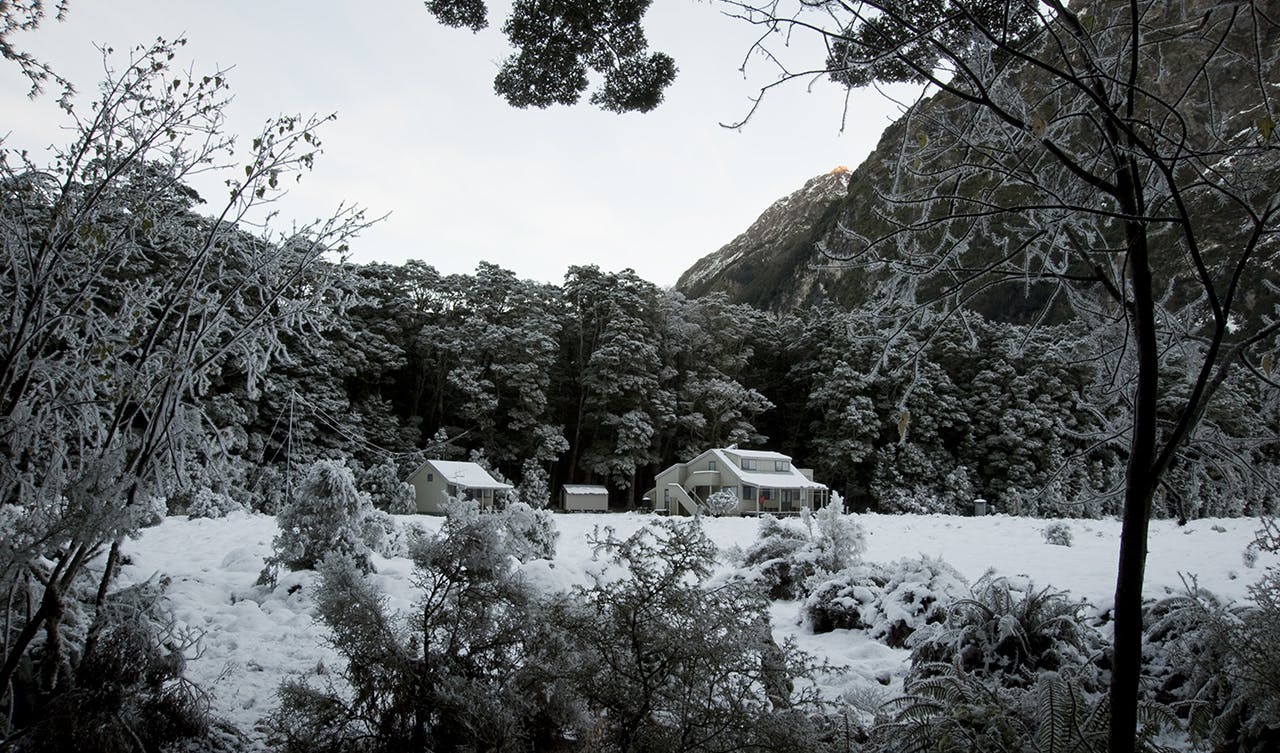 Otherwise, we’re having a ball. Mt Irene and the Murchison Mountains glisten in the lowering sun, and the cloud at the head of South Fiord begins to break up, revealing the dark water.

At Hanging Valley Shelter, we brew tea and eat a late lunch and wait for Julius to catch up. For John, tea is as essential to life as oxygen, and certainly the steaming mug we hand Julius seems very welcome, too. We’re impressed by his stamina, if less so by his foolhardiness.

Wooden steps, partially snow-covered, create awkwardness in the snowshoes, and are better negotiated without them. From the warmth of the sun, the zigzags through the forest take us down into the Iris Burn Valley, a land of seemingly perpetual shadow and cold. We arrive at the hut near dusk, which comes early during a Fiordland winter. The valley floor is a frozen wonderland of hoar frost, with everything coated in needles inches thick.

The temperature gauge in the hut registers -12°C. The large, frigid hut holds little appeal and fortunately we’ve been given access to the snug warden’s quarters. We soon have the potbelly stove roaring. In the main hut, Darryn finds Julius making a futile attempt to light the fire, still wearing his frozen trousers. Despite a large pack, he has very little warm gear or food. We invite him into the warden’s quarters, feed him, lend him dry clothes and set him in the chair next to the fire. He’s grateful, but seemingly unaware how badly he could have fared without help. We chat about his life in Germany.

Moonlight illuminates the frosty valley eerily. It’s so cold and still it seems almost as if time has stopped. At dawn, the sun gilds the peaks above, but it won’t reach the floor of the Iris Burn for weeks.

Down-valley from Iris Burn Hut, the snow slowly disappears, and we enjoy strolling through the well-graded track towards Lake Manapouri. By the time we reach its shores, the cloud has reduced to a thin cummerbund against a belly of distant mountains.

We meet Jason at Rocky Point Shelter, halfway to Moturau Hut, where he’d spent an enjoyable night. We happen to arrive at Moturau just as DOC staff prepare to host then Minister of Conservation Kate Wilkinson who is about to arrive in a boat. She’s been addressing Te Anau locals opposed to the proposed monorail and tunnel between Queenstown to Milford Sound.

Through the Federated Mountain Clubs executive, David Barnes has been opposing both developments and we’re tempted to shout ‘No Monorail, No Tunnel’ when the Minister arrives. But politeness reigns, as we don’t want to embarrass the DOC staff who have generously let us use their quarters.

A little weary and footsore, we finally cross the Waiau River footbridge to Rainbow Reach. Mist rises from the river, and the temperature plummets. Julius insists on taking a picture of us all. We’ve enjoyed the company of this polite young German, and despite our reservations about his decision-making, I know I would probably have done the same at his age.

Access Shuttles service both the Control Gates and Rainbow Reach entry/exit points, and it is also possible to charter a water taxi to Brod Bay

Grade Moderate – although some alpine experience is desirable, and snowshoes and/or crampons are essential. Check the avalanche risk

Huts and campsites During the peak season from late October to late April huts and campsites must be pre-booked. Note that during the winter the huts do not have gas cookers, trampers need to carry their own stoves