As the Old Ghost Road tramping route opens, Lisa Hankey investigates how the historic gold route in northern Buller has been revitalised

Tucked away in the rugged foothills of the Lyell Range, life is being breathed into an historic gold route. An intrepid group of track builders and volunteers are refurbishing and connecting two old pioneer routes, providing a fantastic range of opportunities for trampers, mountain bikers and walkers of all experience levels.

The Old Ghost Road provides an 82km trail stretching from Lyell, in the Upper Buller Gorge, through to the small town of Seddonville, 40-minutes north of Westport and 10-minutes from the coast. The trail joins together the original Lyell dray road and another pioneer route, the Mokihinui pack track. The four- to five-day tramping experience is due for completion this month and takes in some of the most unique scenery the country has to offer.

Users of previously open sections of trail agree that the rebirth of these two historic tracks is inspiring. Hut book feedback praises the quality of the trail and the hut accommodation with users describing it as ‘awesome’, ‘fantastic’ and ‘an amazing track’. Users have travelled from throughout New Zealand to experience the trail and the first flow of international visitors is apparent. Guide book authors Sarah Bennett and Lee Slater from Wellington did a day trip in February, describing the track as having the ability to “make you feel glad you are alive!”.

So what is driving the volunteers who have brought 82km of trail up to standard? 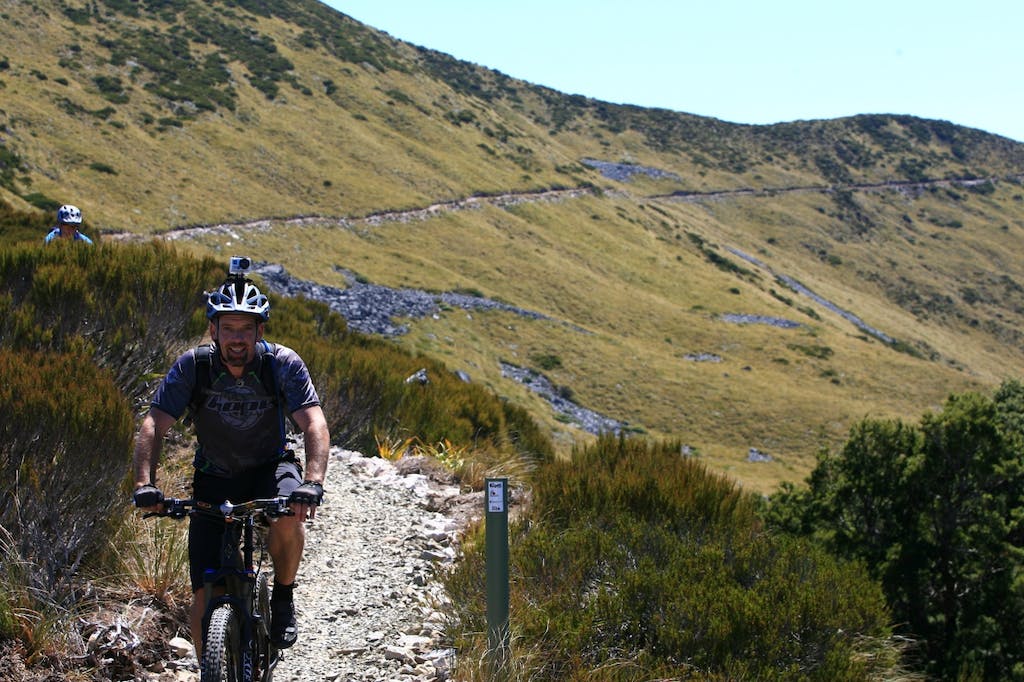 The fire behind this reawakening is down to the passion and energy of the Mokihinui-Lyell Backcountry Trust (MLBT). Initially planning a walking track from Lyell to Mokihinui, the vision burgeoned when the MLBT were successful in an application to the New Zealand Cycle Trails fund. Established in 2009, the partnership project between the National Government and the Green Party saw $50 million set aside to provide funding for a network of cycle trails that would provide a healthy, enjoyable way to see the country, in turn creating economic benefit for New Zealand. The MLBT’s vision was recognised with a $2 million grant from the fund. (Though the tramping trail is now open, it will not be until 2015 that the final section of trail is brought up to mountain bike standard.)

MLBT trustee and visionary Marion Boatwright said the project started from a very simple desire to champion the Mokihinui: “We started with a vision for a walking track, something that would allow people to experience what we have here. But early on, we realised that the old dray road just begged to be a biking track as well. It was a natural fit really.”

The massive volunteer aspect of this project cannot be overstated. The huts and much of the track work have been established through volunteer labour – more than 12,000 hours and counting. The huge contribution of these volunteers recently saw the project receive honours at the 2013 Trust Power national community awards.

Steve Stack was a founding volunteer on the project and for the last few years has led trail building efforts. All up, he has spent more than 5000 hours in the Lyell-Mokihinui backcountry investigating and working on trail construction and restoration. The first section of the project was restoring the track from the Lyell campground to the Lyell Saddle. This section of The Old Ghost Road follows the original 19th century dray road up to the Lyell Saddle to the first of the track’s huts, Lyell Saddle Hut. Accessible by mountain bike or a 4-5hr tramp, the historic track has been transformed from an overgrown, muddy pack track to a well formed cycling and walking track. 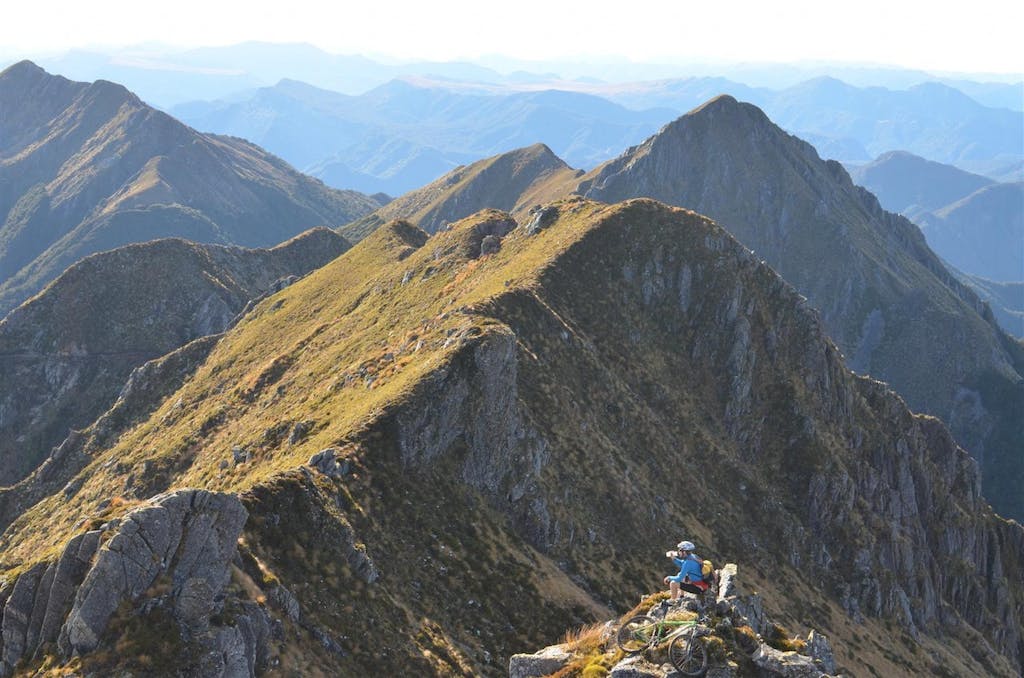 Taking in the view atop Rocky Tor. Photo: Richard Rossiter

“Looking back, the Lyell section was a great lead-in to the whole project,” says Stack. “The things we saw then as being difficult to tackle are all part of a day’s work for us now.”

The original pioneer pack track stopped at Lyell Saddle, but The Old Ghost Road trail carries on through 6km of beech forest and out on to the tops of the Lyell Range. Here, 1300m above sea level, the magnificent tussock slopes offer unprecedented views of three national parks – Nelson Lakes, Kahurangi and Paparoa.

This southern section was opened in February and is proving popular with trampers and mountain bikers. Weekends can see the huts well occupied, with more people taking advantage of the day-trip opportunity. “It’s a fantastic section of track and it’s really gratifying that all the effort we put in, especially in a volunteer capacity, is bearing fruit, and that people are coming and enjoying the experience,” says Stack.

One of the few places in New Zealand where you can mountain bike along the open tops of a ridgeline, the Lyell Range offers an unforgettable experience. This new track has been created through a pristine piece of country. ‘Vegetation direct transfer’ techniques have been used along the edges of the track to minimise impacts, and the track builders have been attentive in balancing accessibility with sensitivity to their surroundings. Fit mountain bikers can go from the Lyell car park to the tops and back in a day, although staying at Lyell Saddle Hut, with its fabulous outlook, is an option. The mountain bike trail is Grade 4 (advanced), and while the climbing gradient is gentle, the overall elevation gain is significant and in places the trail is dramatic. Riders need to be fit and technically competent, and trampers need to be well prepared. 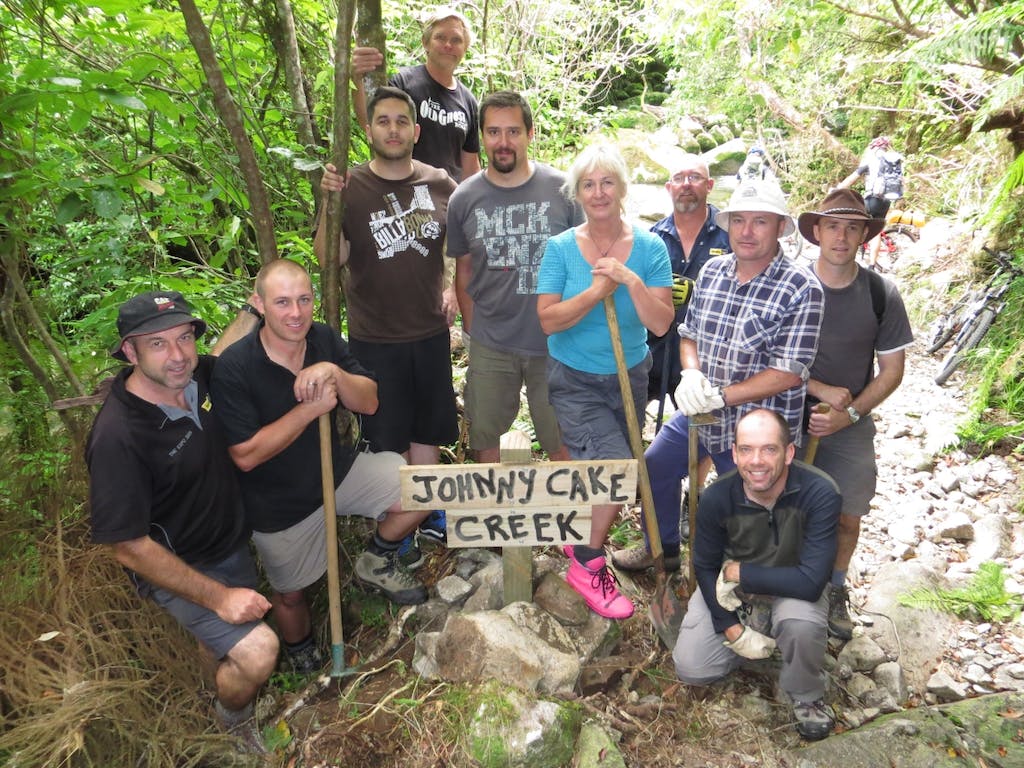 From the tops, The Old Ghost Road wends its way a further six kilometres to the newly named Ghost Lake, a magical spot, truly the jewel in the trail’s crown. Ghost Lake Hut is well appointed with panoramic views and home comforts. The hut sleeps 12, but as with Lyell Saddle Hut, independent sleeping accommodation is available in the form of two separate sleeping huts. Providing a slightly less communal experience, these huts provide a snore-free option for the more discerning (or romantically inclined) visitor and are also a good option for families.

Beyond Ghost Lake Hut the trail is still under construction. Helicopters can be used to connect the two ends of the track in the interim and a tramping through-route is currently under development.

The other section of trail that is open is the northern Mokihinui end. Stretching from the small township of Seddonville, the historic Mokihinui pack track has been restored to Specimen Point Hut, with a new trail built from there to Mokihinui Forks before turning and venturing up the South Branch of that river system. Initially, The Old Ghost Road follows the Mokihinui River through the gorge, staying true to the river. Offering dramatic views of the river gorge, beech forest and Limestone Creek, the abundant birdlife and a natural limestone spring make this northern section an outstanding experience.

The skill of the trail reconstruction team was tested with this section of track, the difficulty in its construction highlighted by the fact the trail has been temporarily closed this winter due to erosion. Bill Milligan from local contracting company Westreef, led the build effort. “Everything I have ever learned over the last 30 years was put to use each and every day on this project,” says Milligan, who has accumulated more than 25,000 machine operating hours throughout his extensive career. “My wife accuses me of letting this project creep into our marriage, but I absolutely love it.” 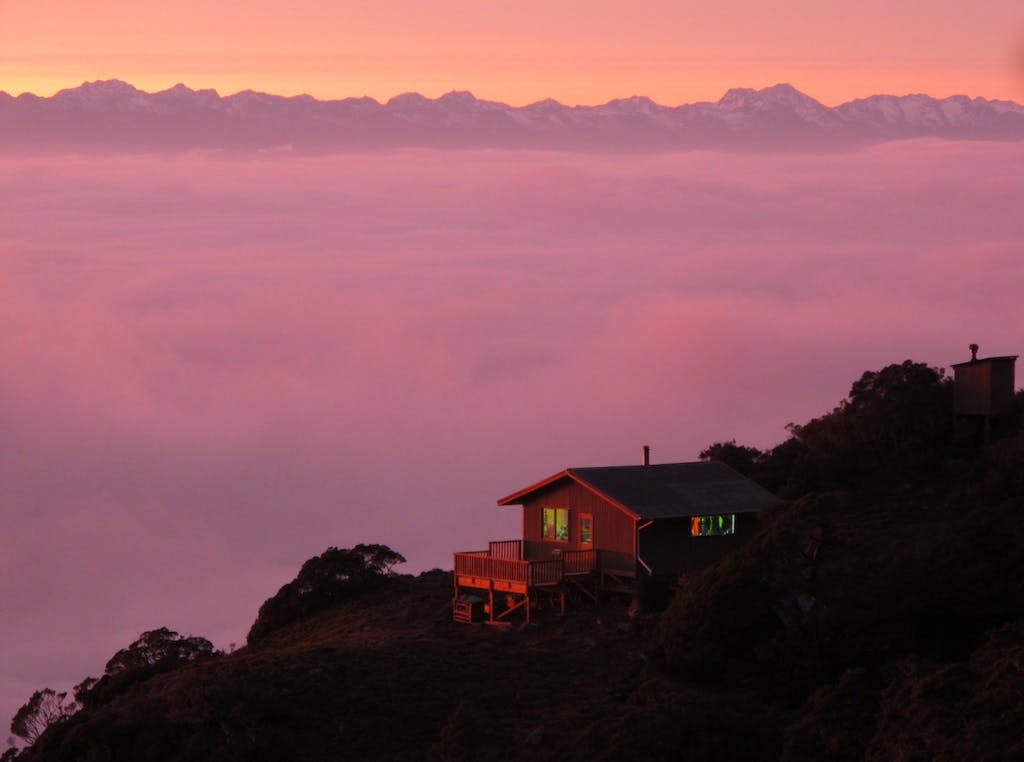 Helping to provide access through the Mokihinui Gorge are three new bridges spanning the infamous Suicide Slips. If crossing them doesn’t require fortitude and determination, then constructing them surely did. The three bridges built here required contractors to spend six weeks perched on a narrow ledge working over shear drops 40m above the river.

With an additional two bridges installed over key creek crossings, this northern end of the trail now offers a host of experiences beyond biking and tramping, including rafting, kayaking, trout fishing, hunting or just simple relaxation.

The popularity of the trail is starting to be noticed in Seddonville. Despite opening on the wrong side of the high season, publican Graeme McKenzie is full of praise for the trail which, he says, is already making a difference to the town.

“Whether it’s people stopping in for a drink or a chat to say how good it was, it’s making a positive impact and I think the best is still well in front of us,” he says.

While both ends of the trail are open to the public, the central section of track is still to be completed and is not without its challenges. The terrain is rugged and it is not hard to see why the early prospectors never made the through-track a reality in the 1880s. MLBT chairman Phil Rossiter believes the trust will have achieved a through-track for trampers by August 2014. “We’ve traditionally constructed the dual-use trail as we go, but there are no downsides or inefficiencies in expediting and marking a through-route for trampers in the short term. In many ways, it brings the entire proposition to life sooner than it would have been and lets a portion of the market get on and enjoy it,” says Rossiter.

The MLBT trustees and volunteers set out to revitalise these two historic tracks and achieve something that the original gold miners and prospectors planned, but never accomplished. Not content with just building a trail, they already have their eye on establishing a significant predator control programme over the middle portion of the trail in recognition of some of the flora and fauna found in the area.

The MLBT has created another must-do experience to add to your bucket list.