Tramping can be hungry work, so why not pick a trip where food is as much the focus as the wilderness.

If you like the idea of a hearty seafood paella and sticky date pudding made from fresh ingredients after a hard day’s tramp, you are not alone.

It seems increasing numbers of New Zealand hikers do too.

At least that’s the verdict of Angus McKenzie, the Nelson-based owner of Southern Wilderness, who says his gourmet tramping business is growing from strength-to-strength every year.

“Without a doubt this sector is on the increase from what I’m seeing,” McKenzie says. “As a company of five guides, we’re definitely getting busier.”

Southern Wilderness takes groups of up to eight hikers on three-to-four day hikes throughout the Kahurangi, Nelson Lakes and Abel Tasman national parks.

Typically, around 150 people sign up for the guided tours every year, paying around $2000 for a hike.

Hikers carry their own packs and stay in DOC cabins, but are treated to a gourmet breakfast and a three-course evening meal made from fresh ingredients. Lunch is usually freshly-made sammies.

“It’s certainly not a unique idea,” McKenzie says. “But it’s becoming really popular with time-poor foodies who love the idea of hiking in beautiful places but can’t bear the thought of eating dehydrated packet food night after night while they’re doing it.”

He says 90 per cent of Southern Wilderness’ clients are Kiwis – mostly from Auckland – who want the convenience of catered food, but also want to have a good time while they’re tramping.

“For a lot of people, good food and beautiful scenery go hand-in-hand,” he says. 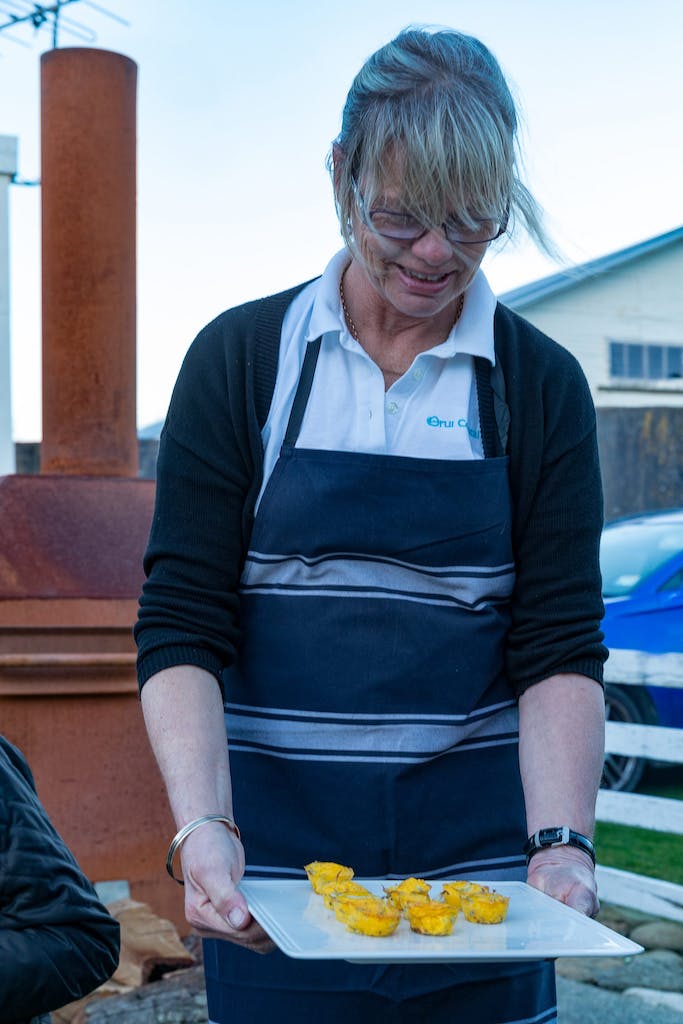 Wairarapa farmer Angie Meredith agrees. “Not everyone wants their weekend tramp to be a hard slog.”

Meredith offers hikers – again mostly Kiwis – the chance to hike across her farm station (and two others nearby) between October and April.

She says around 130 walkers come through Orui Station every year.

Guests pay between $300 and $400 to walk between farm cottages over two or three days, with all food and accommodation provided.

“We don’t guide our walkers, but we do feed them really well and encourage them to bring their own wine – Wairarapa pinot noir of course – to enjoy as a treat at the end of the day.”

Nearby farmers at Whareama and Tora run similar businesses, with Tora Coastal Walk reporting a sell-out season this year.

Higher profile hikes offering fine dining to the international market include the well-established Hollyford Track in Fiordland, a guided walk run by Ngāi Tahu, and the Milford Track’s guided tours.

Meanwhile, Nature and Nosh, which launched in March this year, is now offering high-end hiking and eating tours in Auckland, Waikato and Coromandel. Tours range in price from $400 for a half-day walking and food tour to multi-day tours for around $3500.

“Steve, my husband, and I have always been keen trampers. We’ve hiked all over the world – in Croatia, Austria, Italy and Spain. The formula for our adventures is always the same – do our research on local hikes, then find the best local places to eat to treat ourselves for our efforts.

“After splashing out on a fully-inclusive guided hiking tour in Patagonia – the W Trek – we spent a lot of time talking with the Americans and Australians in our group about the merits of doing something similar in New Zealand. It just made sense – so we did it.”

Rae says their guests stay in lodges, B&Bs and eat meals that are both host and chef prepared.

“But we also take our guests to visit local wineries, cheese makers and other artisan producers in the region – we want to offer the full foodie experience, so it’s fresh produce wherever possible. Think fresh mussels, oysters and gourmet ice cream.”

It’s still early days for Nature and Nosh, says Rae, who runs the business with Steve.

“Saying that, we’re pretty confident in what we’re offering. We’ve done our research. We’ve travelled extensively ourselves, observing things first-hand. We’ve talked to other companies and Tourism New Zealand and the regional tourism offices. But mostly we’re following a strong gut instinct on this – if you ask me, I definitely think gourmet tramping is gaining momentum.”