At only 22,530ha, New Zealand’s smallest national park is also the busiest. The iconic golden sands, clear water and impressive granite cliffs are a huge drawcard to the thousands who flock there every summer. However, most of the tourist traffic is concentrated between Marahau in the south and Totaranui in the north, leaving the interior relatively free of foot traffic. In winter, you can often have this playground to yourself.

While much of the park has been intensely modified – the granite quarried, the timber felled and the bush burned for farming – the mixed broadleaf and podocarp forest is now re-generating, replacing the ubiquitous gorse, tea-tree and wilding pine. Instead of possums, stoats, rats and quail, visitors will soon be sighting saddleback and kakariki, thanks to the efforts of Project Janszoon which is reintroducing native birds to the park following an intensive trapping programme.

The Tonga Island Marine Reserve and surrounding ocean is bulging with wildlife, including dolphins, seals, shags and penguins.

Get side-tracked at Wainui Falls (30min)

Venture off the beaten track. Slow down your journey. Explore more of the Abel Tasman than most punters ever experience.

A worthwhile detour off the Coast Track is to Falls River, which ends at a stunning waterfall and perfect swimming hole. Look for the signposted turn-off at the head of Torrent Bay, and allow at least three extra hours to enjoy this hidden gem.

Another scenic waterfall is at the northern end of the park. The magnificent Wainui Falls are reached on a 30-minute bush trail. The track passes through nikau palms, rata trees and ferns. Keep a lookout for a possible sighting of the giant snail, Powelliphanta.

The well-trodden 54km Great Walk takes between 3-5 days, depending how much of the track you wish to complete. Four commodious huts and 18 campsites help spread out the hundreds of hikers and holiday-makers crowded into this corner of the park.

The hardened track surface is better suited to light footwear, and being two metres wide in places, it’s nearly impossible to lose your way.

A plethora of pristine beaches can be accessed on short side-tracks or by boat. Over the languorous days of high summer, swimming will be high on the agenda and Abel Tasman boasts some of the best beaches in New Zealand. Sheltered from prevailing winds by the hills and granite headlands, there are heaps of places to bathe. The best beaches include Stilwell Bay, Akersten Bay, Anchorage, Bark Bay and the 1.5km stretch of golden sand that is Totaranui.

Get to the Point (Overnight)

The vast majority of visitors only do a day walk, and those who tramp the Coast Track often stop short at Totaranui – a spectacular beach with road access providing a quick exit. Ironically, some of the best bits are further north, past Anapai Bay and Mutton Cove, to the spectacular Separation Point – the jewel of the Park, separating Golden Bay from Tasman Bay.

This rocky peninsula sports a seal colony, numerous shags, and has recently become a gannet reserve. Beyond here, the trail leads to Whariwharangi Hut, a two-storey hut exuding old-school charm, built in 1896. Allow two hours to walk there from Wainui Bay. There’s ample camping in the clearing, and an idyllic swimming beach is not far away. The track along and up to Separation Point takes a further hour, and a detour to Mutton Cove makes for a loop walk. 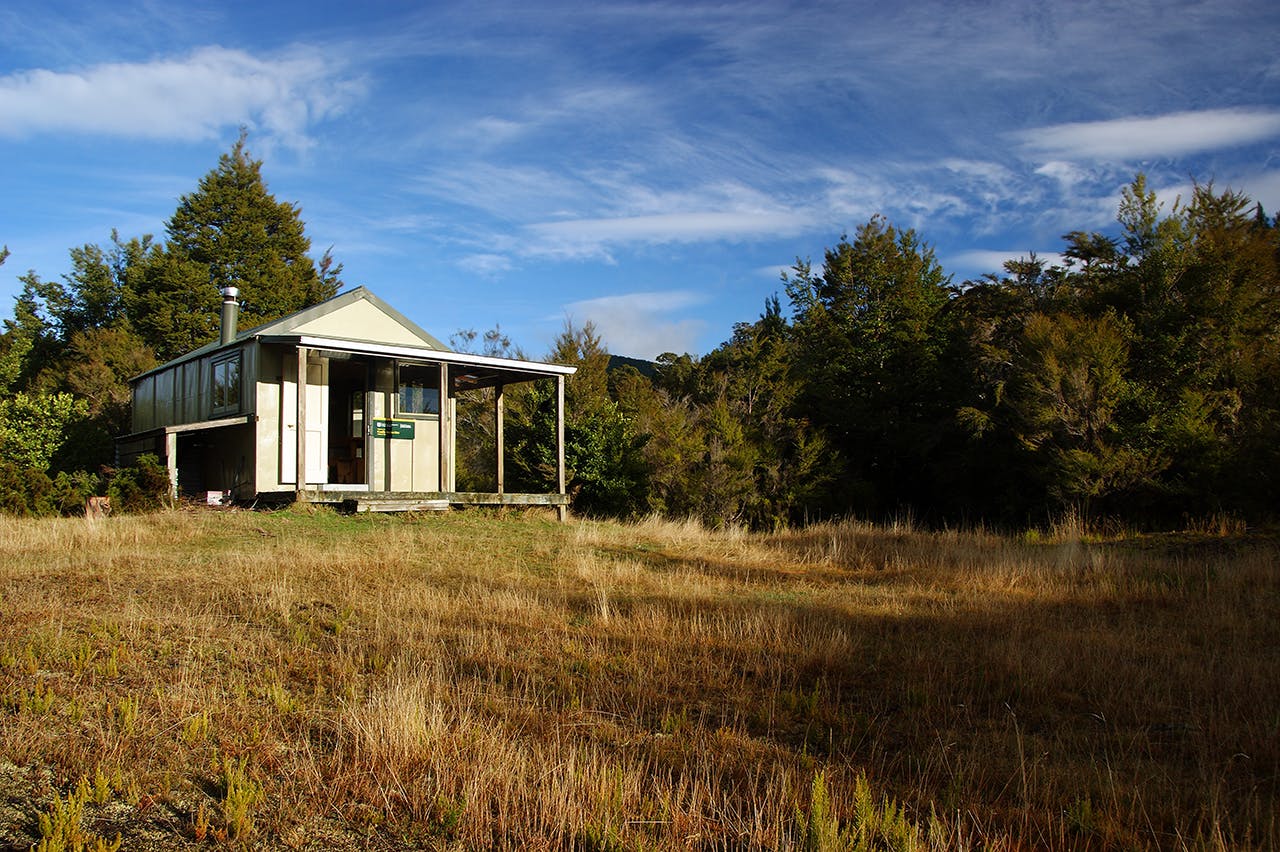 When you walk the Coastal Track, which is one-way, you need a boat trip back, or a car shuttle.

A novel solution is to walk the 41km Inland Track over the mountains back to Marahau. This latter option is your standard tramping trail, taking three days, with two huts en route. While only topping out above the tree-line for occasional views, the Inland Track is a pleasant ramble along the high hills – without the claustrophobia of the crowded Coast Track. Rocky promontories at Porters Rock and Castle Rocks give sea views.

The highest summit in the park is Mt Evans – a modest 1156m – making it a rarely-climbed but very achievable side trip on the the Inland Track: you can bag it in a couple of hours from Moa Park Shelter. There is an un-tracked 2.5km route through beech forest to the summit, but it is not particularly difficult.

Camp out of site

DOC runs an efficient online booking system for all huts and campgrounds. One way to avoid the crowds is to bypass the huts and pre-book the smallest campsites. Here’s our pick of the best….

If you’re on foot, venture off the Great Walk to your personal piece of real estate at Akersten Bay, Tonga Quarry and Anapai Bay – these tent-sites are on sandy, secluded beaches, and have limited bookings available. Of historical interest, Tonga quarry was once the site of the stone works, winch house and wharf. Here, under the windblown manuka, large concrete plinths are all that remain of the 1904 granite quarry.

If you’re kayaking, you can reach more remote camping spots such as Mosquito Bay or Observation Beach. With no foot access here, you’ll avoid much of the tourist traffic.

Free from the restrictions of walking, with the option of carrying more luxuries, kayaking is probably the best – and most popular – way to experience the Abel Tasman. Circumnavigate Split Apple Rock; visit the unusual Tonga Arches; surf with the seals; make landfall wherever you wish, and reach remote beaches with no foot access. Facing east, this coast is sheltered and perfectly suited for a multiday voyage. There is a wide range of guided and freedom kayak hire options available from bases in Motueka, Kaiteriteri and Marahau in the south and Tata Beach in the north.

A must-do day-trip is to the iconic form of Split Apple Rock – this huge monolith looks like a giant white marble has fallen from the sky, and broken into two perfect halves. This landmark is closer to Marahau, but the voyage from Kaiteriteri is less tide-dependant and more adventurous. Allow two hours for the return trip. Make landfall at the golden beach of Towers Bay and enjoy a picnic. There’s a toilet here. 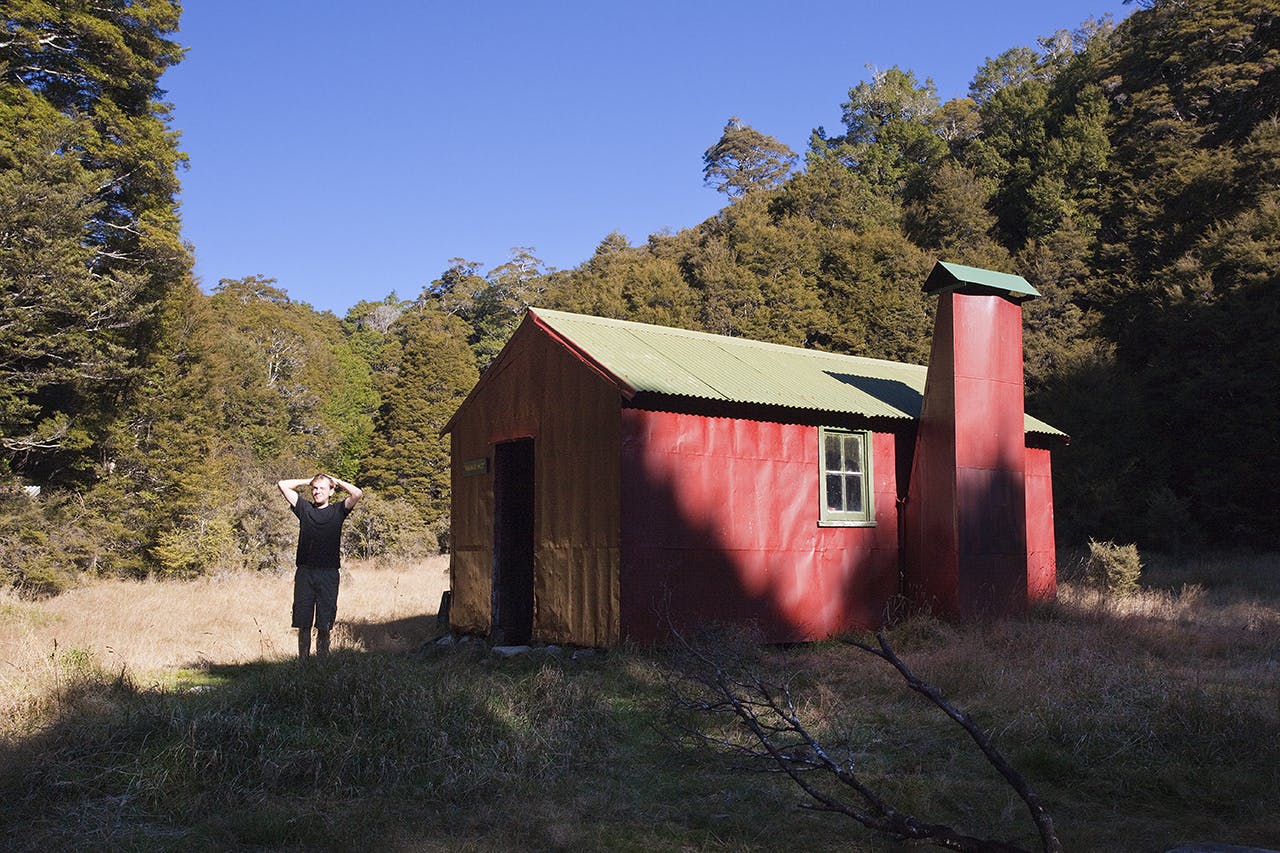 Hole up in a hut (Wainui Hut)

Probably the best get-away-from-it-all bolt-hole with reasonable foot access, Wainui Hut is a basic NZFS four-bunker still sporting an open fireplace and squatting in a clearing near the Wainui River.

It can be reached in two hours from the Harwoods Hole car park at Canaan Downs, but a longer day-trip involving a climb of Mt Evans before dropping down the Inland Track via Evans Ridge and on to the hut makes a good loop option.

The country here is easy-going, travelling across heavily-modified farmland and through regenerating forest. While rather basic, this red shed only costs $5 night.

If you have the need for speed, a Grade 3 mountain bike track from the top of Gibbs Hill might be in order. The 10km trail from Wainui Bay to Totaranui is rated ‘Intermediate’ and lasts 2.5hr. To avoid conflict with trampers on the Inland Track, mountain biking is only allowed from May to October.

Project Janszoon is restoring the park to its former glory

Strangely, the country’s busiest national park doesn’t have its own visitor centre. But this gap is filled by Project Janszoon’s free smartphone app (download it at www.janszoon.org). The trust has installed a restricted wi-fi network around the park to connect users with the environment. Track details, maps, and weather updates can be uploaded, as well as interesting historical and ecological information – it’s all included in the free app.