Nelson Lakes has something for everyone – kayakers and boaties, trampers and climbers, hut baggers and day-trippers. Pat Barrett leads us on the perfect week in a perfect park

Nelson Lakes National Park is the icon of the Nelson district, embody-ing all the facets of mountain landscapes and something more – a beauty that pervades every hidden nook, from exquisite Lakes Rotoiti and Rotoroa to the craggy summits of the Travers Range and rolling alpine tops of the St Arnaud Range.

But it’s lakes and rivers that are the essence of this park. The Matakitaki, D’Urville, Sabine and Travers dissect the park from south to north, all adding to the flow of the Buller, a mighty South Island river with its source at the outflow of Lake Rotoiti.

Forests blanket the valleys and, where they are absent, rolling tussock flats spread along riverbanks and terraces and climb far above the bushline, wrapping the ridges in golden hues. Glaciers have vanished, but their legacy remains – they have carved all the valleys, lake beds and mountainsides, and laid a necklace of jewels across the high basins; alpine tarns, for which the park is renowned.

Beech varieties dominate the forests, granting a spaciousness and airiness to the canopy, and only in the lower reaches of the Sabine and D’Urville do they give way to podocarp, growing alongside red beech on the shores of Lake Rotoroa.

Nelson Lakes is a synonym for tramping tranquillity, such is the attraction of this remarkable slice of the Southern Alps where many trampers begin their outdoor ‘career’, amid valleys decked in green.

I grew up here, in a tramping sense, as my first major South Island expedition was a five-day Easter trip traversing most of the major rivers with my tramping club. We had the lot; sun, snow, rain and flood. Yet it didn’t deter me and I have journeyed back to the park more times than I can remember, to camp, walk, tramp, canoe, climb and hunt. There is everything here, and though perennially popular due to its ease of access, stunning views, and great huts and tracks, you can readily get away from the crowds and into some authentically remote locations.

So, with a week to spare and with so many worthy options, how would you spend it in Nelson Lakes National Park? This is my round up.

Get high (pictured above)

At Lake Rotoiti there are several options for additional time in the park. A good starting point is to climb the winding track up the flanks of the St Arnaud Range to reach the bushline. On the way you will pass the ambitious Rotoiti Nature Recovery Project mainland island where intensive trapping and poisoning of predators is being undertaken in an attempt to restore the dawn chorus of native birds. This trap line extends up to and along the crest of the St Arnaud Range.

At the bushline, a short scramble leads to Parachute Rocks where there is a panoramic vista of the park and the Wairau Valley, through which runs the arrow-straight Alpine Fault – entering the Rotoiti area from Speargrass Valley. This faultline runs for several hundred kilometres in a northeast-southwest direction through the West Coast.

Descending from Moss Pass you will have seen the striking phenomenon of Blue Lake nestled against the flanks of the mighty Franklin Ridge. The luminous blue-green depths are like a beacon, indicating that this lake is special. Graded as virtually optically perfect with underwater visibility of 80m, Blue Lake literally shines.

Lake Constance, a much larger lake above the moraine dam, lies directly to the south. It is one of New Zealand’s largest alpine lakes – over 2km long at an altitude of 1340m. The mountains surrounding it are magnificent and a full day could be spent here scrambling farther afield on the poled route along the Te Araroa Trail, all the way to rugged Waiau Pass on the Main Divide. 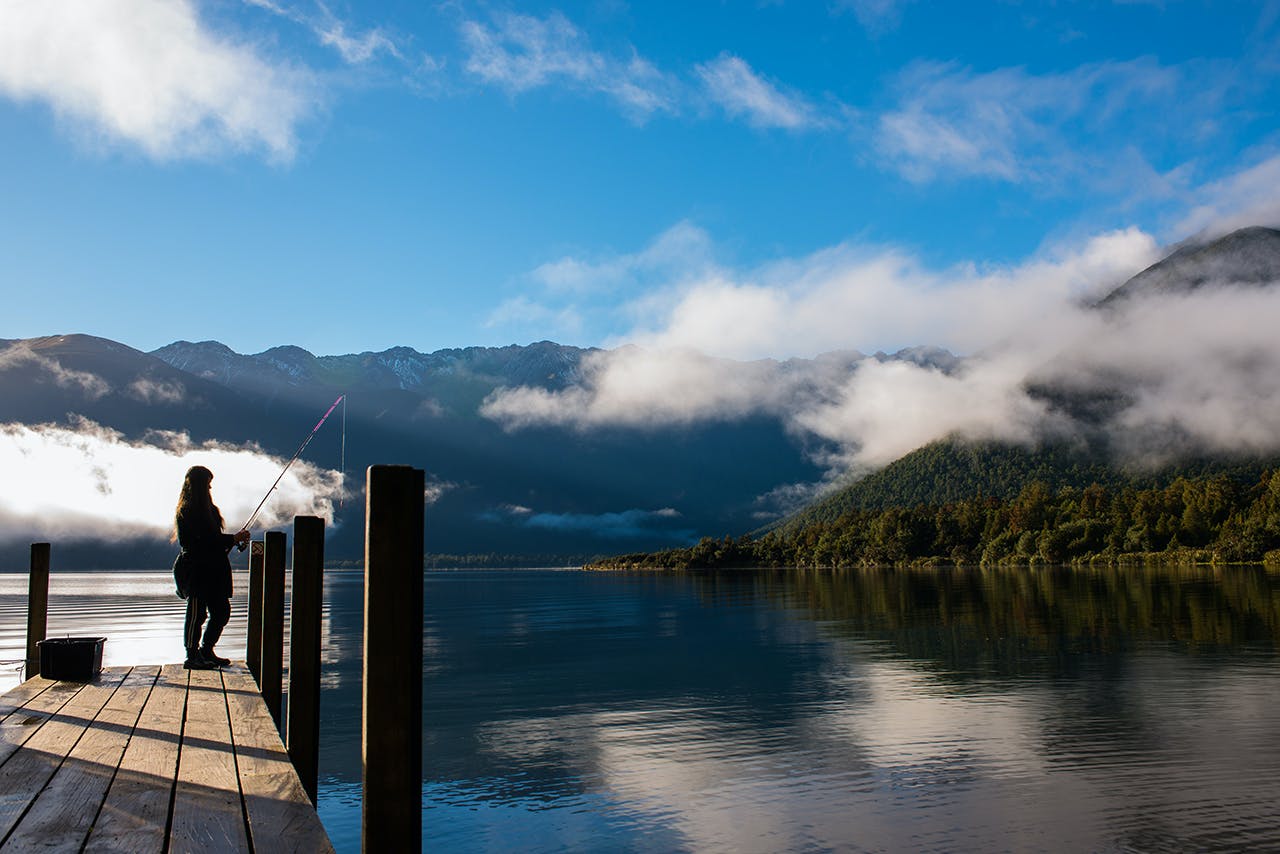 Catch dinner from the jetty at the head of Lake Rotoroa. Photo: Pat Barrett

Visit a lakeside hut and fish

At just over 14km in length, Lake Rotoroa is the largest and longest lake in the park. Its narrow profile reaches well into the centre of Nelson Lakes and makes it an excellent entry point – albeit by boat. You can hire a water taxi to the lakehead where you have a choice of two comfortable huts: Sabine or D’Urville. These huts are located close to the entry points to their namesake rivers, and are linked by a good track and swingbridges, making possible a day trip between the two, fishing the lake shore as you go.

The settings are beautiful and tranquil as you are far enough away from the rivers to be removed from their constant roar. Serenity reigns, encapsulated by the lapping of the lake and the wide sweep of the forested hills descending to the shore from craggy tops. Brown trout are reasonably plentiful, though shy, and if you are observant you will see numerous eels around the jetties at dusk.

From Morgan Hut, you could, in a long day, or perhaps two shorter ones, head up-valley to George Lyon Hut and then over the river for the long, steep climb to spectacular Moss Pass, 1785m. This poled route should not be underestimated as there are many bluffs and areas of steep terrain awaiting the unwary. The eastern face is also very steep and can often carry snow, but is easily descended in good conditions.

On the plus side, in good weather you could put in a high camp at one of the alpine tarns just below the pass on the D’Urville side. The views from up here are worth every metre climbed, and, not far down on the Sabine side, Blue Lake Hut awaits. 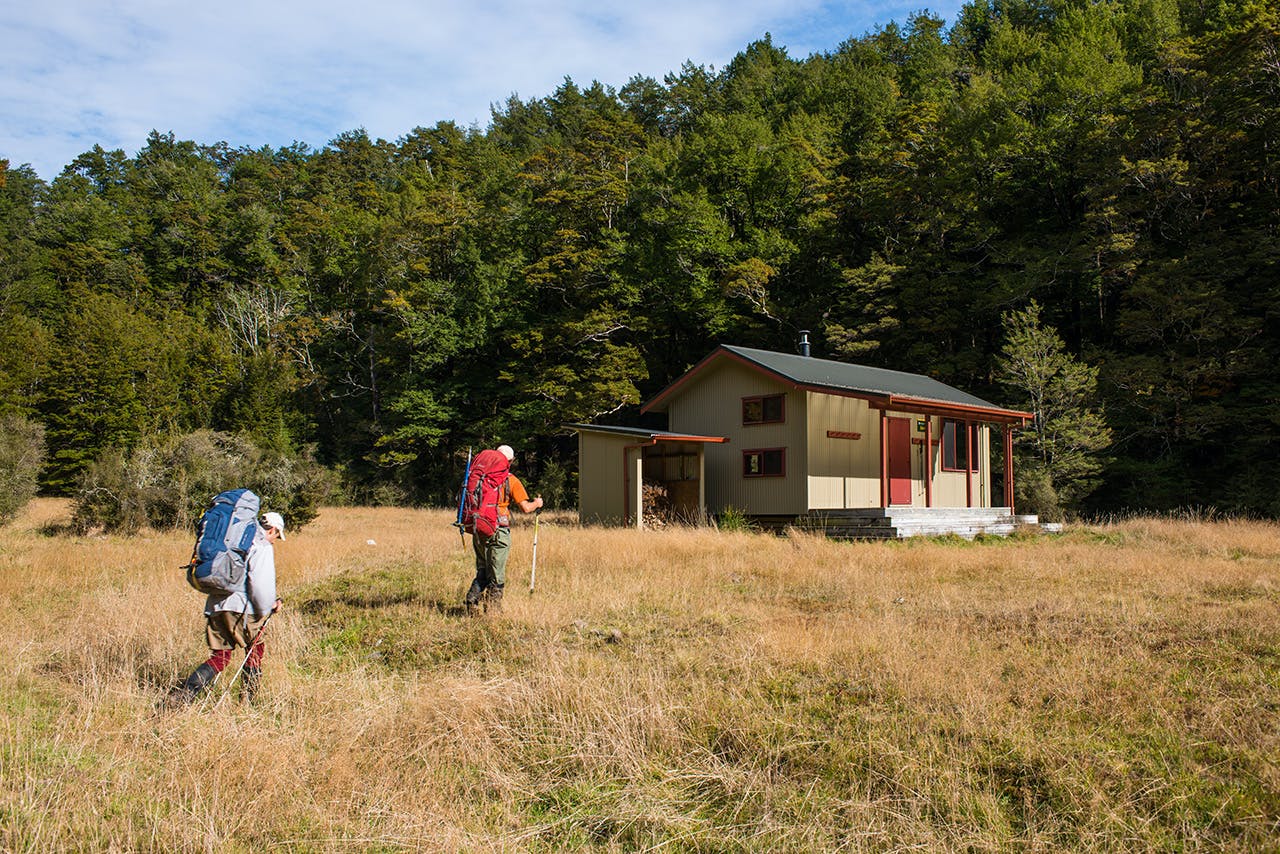 Beyond Rotoroa’s lake shore, the call of the deep, lush forest echoes powerfully. You will experience this after even a short time at the lakehead – it just begs to be explored. So head off, take the D’Urville, easily one of the more beautiful valleys. I like it particularly as it is more spacious than the neighbouring Sabine and allows for better views along the way. Not far up-valley, you will come across Morgan Hut, a bright and spacious hut set at the southern end of a large valley flat. This hut gets all-day sun – at least over the summer months – and is the perfect place to spend a night on the way to your next adventure. You could even fish the river or hunt the flats. It will take about half a day to reach, allowing plenty of time to relax and enjoy the surroundings. It’s a tranquil spot, as the river is well away from the hut and there’s a great deck to relax on.

The Travers valley is the major gateway into the park, and for good reason: it is very beautiful, has an excellent track and hut system and also provides access onto the park’s major summits along the Travers Range. There are three standout peaks here – Mt Hopeless, 2278m, Mt Cupola, 2260m, and Mt Travers, 2338m. This last is the easiest to climb and mostly involves a long steep scramble from the head of Summit Creek, while the other two require good route finding, a rope and climbing equipment. Both have nearby huts – Cupola Basin Hut and Hopeless Hut, providing excellent bases for the summit attempt.

If you are fit and ambitious, a week could be spent climbing all three and visiting their attendant huts. 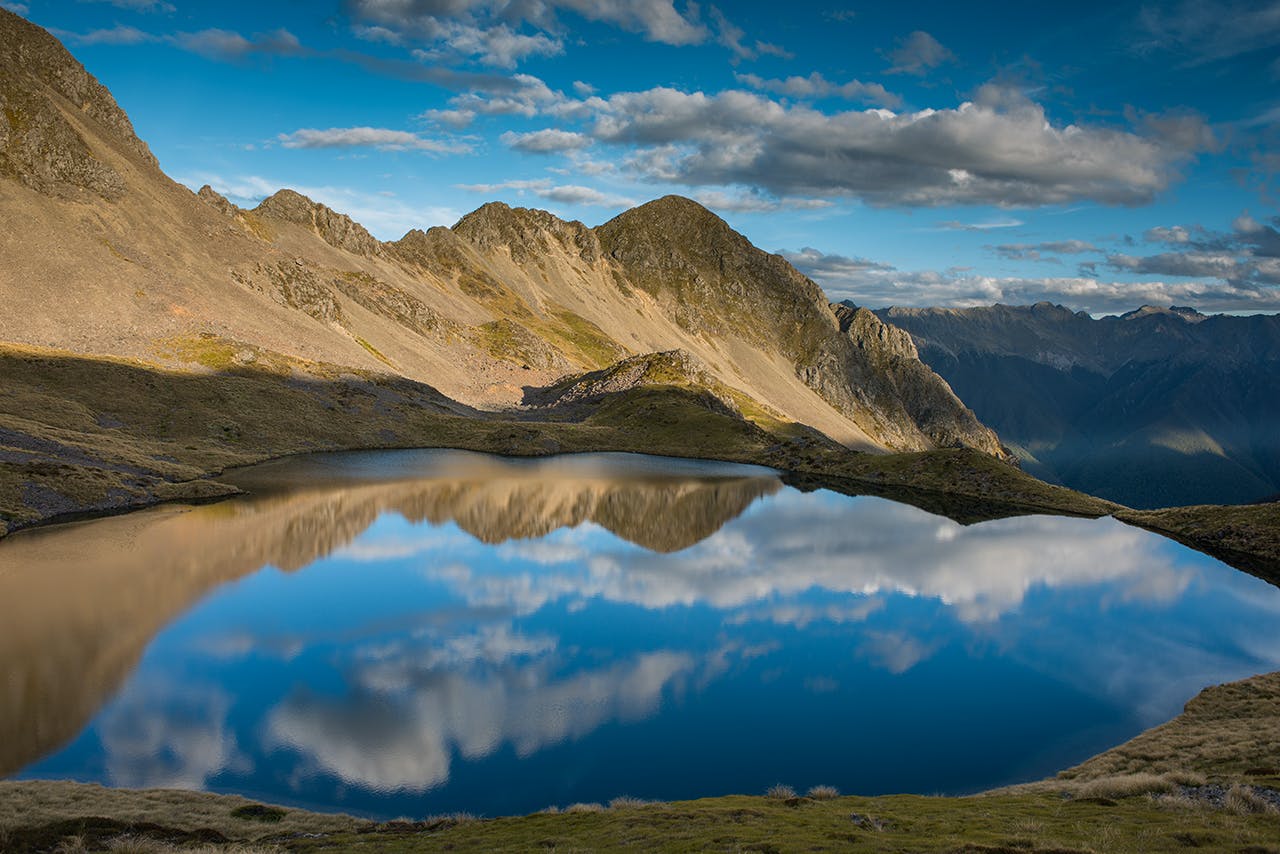 Camp beside an alpine tarn to catch the sunrise. Photo: Pat Barrett

Catch the sunrise at an alpine tarn

While you are at Parachute Rocks, you might consider continuing to the top of the range to camp at one of the many high tarns overlooking the upper Wairau Valley and distant Raglan Range.

Capable parties can, in good conditions, climb along the ridge to the south-west for several kilometres through many beautiful tarn-filled basins. A return can then be made back to the lakeside or lower Travers Valley via steep bush faces. This is an unmarked route and a spectacular 2-3 days could be spent exploring, camping and climbing the range’s peaks.

From the valley floor, you could either go up the Travers Valley, a very popular walk, or around Lake Rotoiti.

Perhaps the best day trip in the park, the Lake Head Track passes through many beautiful bays along Lake Rotoiti, with outstanding views of the Travers Valley and Mt Robert Range. The walking is easy throughout.

Beginning at Kerr Bay, the track traverses the eastern shore of Lake Rotoiti to Lakehead Hut (28 bunks). It is also possible to hire a water taxi for a 12-minute dash to the hut.

The beech forest here is particularly attractive and good numbers of native birds are present.

A complete circuit of the lake can be made via Coldwater Hut (six bunks) on the western shore. This entails crossing the Travers River (if the river is running high, a swingbridge is located about one hour up-river). The western shore is also well tracked and ends on the Mt Robert Road leaving a 4km walk to West Bay and the track over the peninsula to Rotoiti Lodge (1hr), to return to St Arnaud (unless you have arranged a car shuttle).

Whisky Falls, 40m, on the western shoreline, is accessible via a short trail from the lakeside, and provides a pleasant diversion from the long day’s walk if completing the full circuit.