Access
from the Scoria Flats carpark on the Bruce Road. The Stanton Memorial rock is located at NZTM E1818613/N5652320.

From the Scoria Flats car park we headed due south towards a distinctive rocky outcrop, clearly visible against the skyline – Pt 1750m on the map and known locally as Camelback or O’Reilly’s Wall. A steady climb of nearly 300m across a terrain of shattered rock and up an old lava gully gave us time to ruminate on why ‘O’Reilly’s Wall’, but the question remained unanswered. From 1750m, our scant directions advised us to keep high along the ridge heading south and, with luck, cairns would be spotted. We thought we had kept high, but obviously not when arrival at a rather fearsome drop evoked a muttered “I don’t think we’ll go down there”.

A short traverse across a steep ash slope and a scramble through a couple of rocky guts soon had us on higher ground and old-fashioned map and compass work put us back on track. Amidst the vast area of fragmented rocky rubble, cairns were spotted, going our way – mainly south-westerly. So it was follow the compass, and spot the cairns through a volcanic moonscape, interspersed with small streams and waterfalls, until we reached a shelf overlooking a large desolate plateau where a huge rock stands sentinel. Threading our way down, we arrived at our destination with an immense feeling of satisfaction, tinged with some sadness as we recalled the rock’s history.

In August 1931, 14 university students set out from the Chateau Tongariro in fine weather to climb Mt Ruapehu. Blizzard conditions struck while they were at the summit and they descended into the Whakapapaiti Gorge instead of the Whakapapa Valley. The party spent a night sheltering near the rock and then split into three groups. Warwick Stanton and a companion set out to try to get help, but Warwick eventually succumbed to exhaustion: his body was later found many kilometres west of the Chateau and a memorial that reads ‘In proud and affectionate memory of Warwick Stanton who passed this way in August 1931. Aged 18 years’ marks this spot. 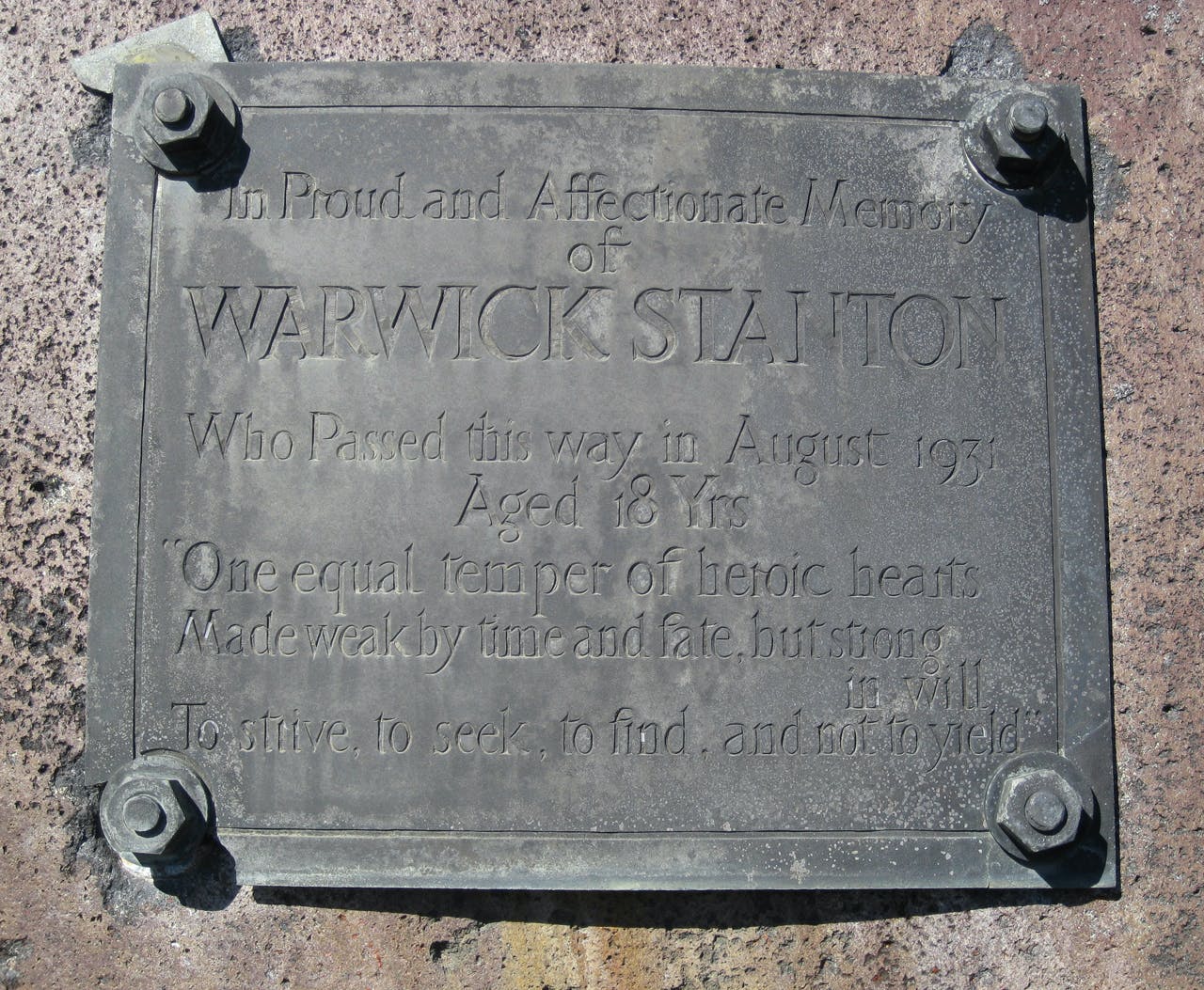 A reminder that mountains can be deadly places at times

The others in the party, some of whom spent three nights on the mountain, all survived.

Time to move on, briefly south-southeast, and then down a steep slippery slope through bluffs to the headwaters of the Whakapapaiti Stream: a magical area with waterfalls tumbling, and the scenery a major distraction from the task in hand – remaining upright and keeping one’s footing on the loose stony slope. My companion, who describes herself as more a walker than a tramper, remained unusually silent.

A slow and steady descent was made, following the true-right bank of the stream, which at one point hurtled in spectacular fashion over a 30m drop. A lightly made track under the bluffs and steeply down through knee-deep vegetation led to a crossing point in the stream, where a brief scramble took us up to a wide terrace of alpine herb fields that made for easy strolling, keeping parallel to the stream on our right. Conversation finally resumed.

The poles of the Round the Mountain Track were spotted, and we were soon dry-foot crossing the Whakapapaiti and into a 200m puff up the zigzag track to the crest of another plateau, passing the signpost for Whakapapaiti Hut on the way.

Half an hour later we were pulling off our boots in the car park, delighting in our good fortune of having a perfect day to explore a rugged mountain area, tempered with reflecting on the ill fortune that befell a young man more than 80 years ago. 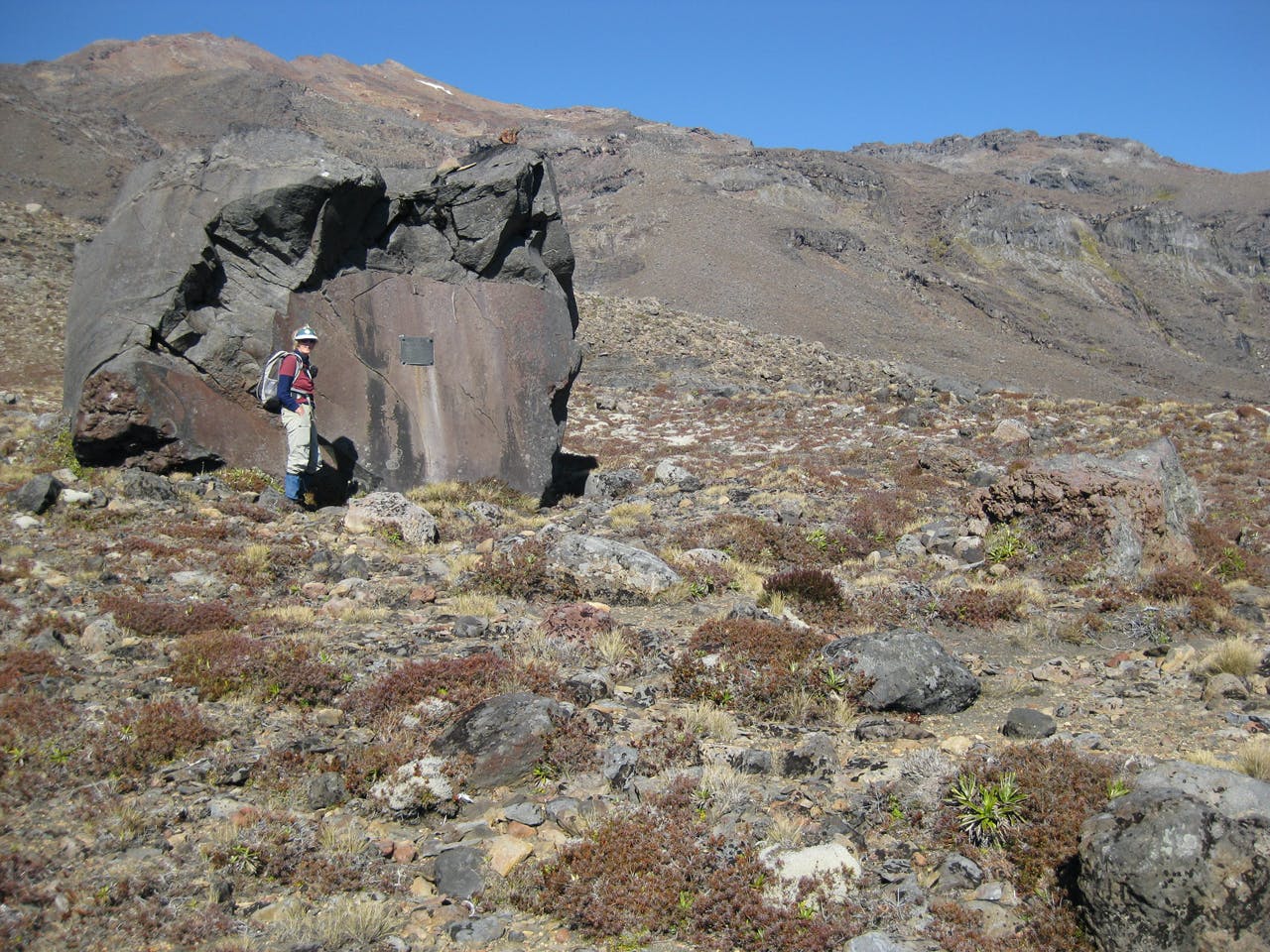