The lower portion of the Tasman Glacier is one of those unique places. I say unique because it felt like we were battling a time warp while trying to traverse its endless, crumbling rock towers. The glacier appeared to stretch in all directions, and it was as if Shelley and I couldn’t make any progress across it. Occasionally a rock the size of a small car slipped from its perch, hopefully without either of us on top; or a patch of dirty ice poked through the piles of moraine debris reminding us that we were actually walking on a glacier. This was a place with little cause to linger.

If the terrain wasn’t so time-consuming, and moveable, we might have appreciated the views overhead more fully. New Zealand’s highest mountains, including Aoraki the cloud piercer, stretched skywards with dark knuckles of rock stepping up towards them and hanging glaciers clinging to their flanks. There could be no mistaking that this was alpine territory.

It was a surprising – and pleasant – contrast to eventually arrive at the flat grasslands of the lower Murchison Valley. Canadian Geese and Paradise Ducks flew past, intent on scoping out any unoccupied moraine ponds. There would have been nice camping sites near the ponds, but Shelley and I had our minds set on the distant Onslow Hut (also known as Steffan Memorial Hut) further up valley.

It seems that the lower Murchison Valley has become a forgotten corner of Aoraki/Mt Cook National Park. Its snow-covered upper glacier certainly gets plenty of ski-touring traffic, but the lower valley is rarely travelled. Maybe access across the Tasman moraine is one reason, along with the notoriously difficult-to-cross Murchison River and the increasingly difficult-to-skirt Murchison Terminal Lake.

But, on the long weekend Shelley and I had chosen to visit, the Murchison, both the river and the lake, proved to be straightforward. By the end of the first day, we had reached Onslow, sited under the towering eastern aspect of Mt Chudleigh, and still some two vertical kilometres below its summit, the hut is cosy and old school. Set on the edge of an ancient moraine wall carved by the Murchison Glacier’s former advances, the hut looks out over the terminal lake. A pool at the base of a small waterfall is the local water source.

Across the other side of the valley, evening light shifted from peak to peak on the Liebig Range. Icebergs drifted over the smooth waters of the lake, while waning sunlight sparkled against the lake’s surface. It was a peaceful place. 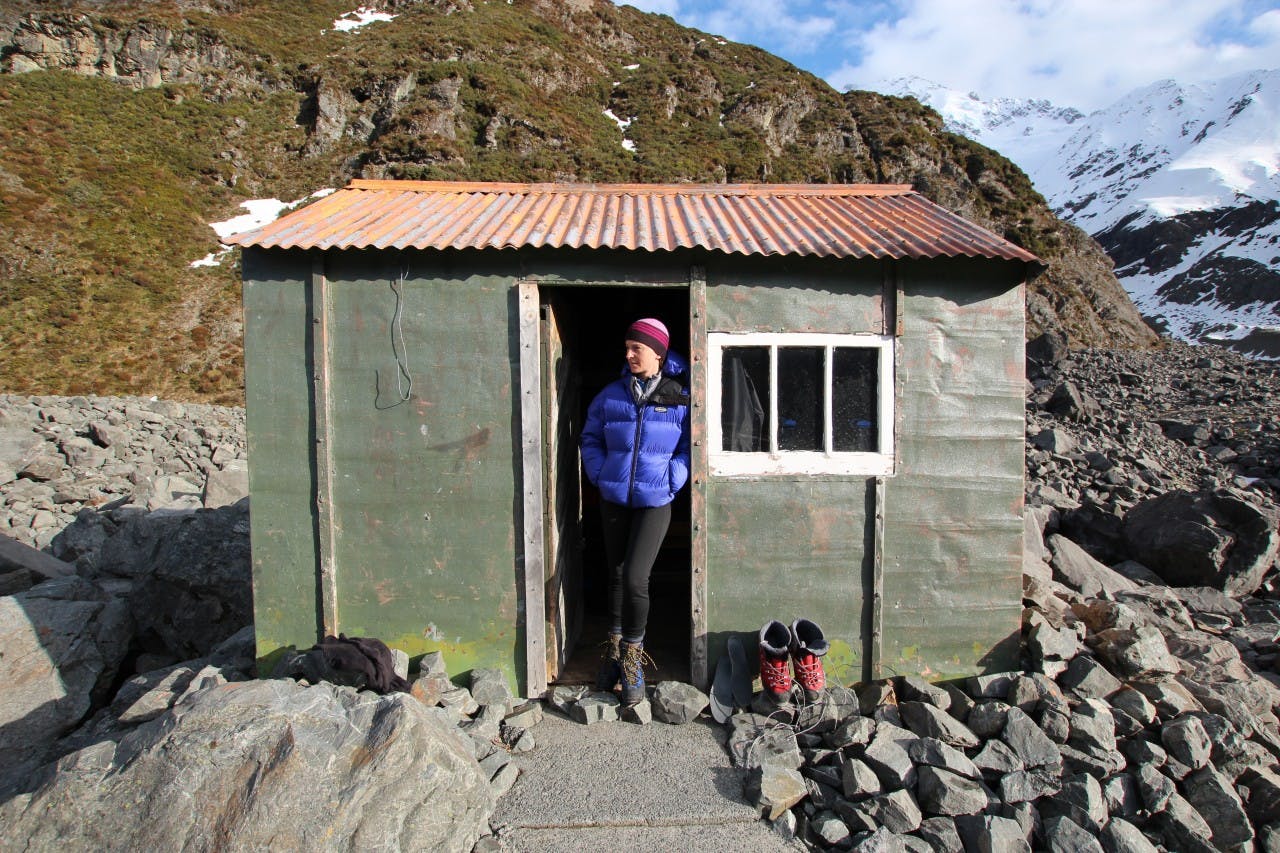 Shelley noted that the hut logbook showed only five visits in the last two years. No doubt the modern Liebig Hut across valley is more popular; either that or climbers and trampers aren’t interested in the area any more. Yet, looking up at some of the unclimbed rock features on various mountain faces, I couldn’t help but think they were missing out. There was little or no tricky glacial access, the rock strata looked suitable, and there seemed to be heaps of climbing options.

The following day, Shelley and I traversed the true left of the terminal lake, exploring further up the valley. Tahr seemed intrigued by our presence, rather than their usual whistle and bolt routine in areas that see more human traffic. The majestic eastern flank of Malte Brun rose before us, a mountain Shelley has climbed.

Before our trip, DOC informed us that the best way to travel the lower to mid Murchison was on the true right. However, we found this not to be the case. The moraine wall on that side of the terminal lake looked to be near impassable, while the high traverse around the Murchison River just below Onslow Hut had deteriorated badly. This would require traversing hundreds of vertical metres above the valley floor and then still having to cross steep and eroded guts. The true left was much easier, but did rely on the river being low enough to cross. We crossed at the toe of the lake, and again just below Onslow Hut.

After leaving the lake shoreline, Shelley and I gained height up a broad shelf of old moraine that led onto a grassy terrace beneath Mt Hutton. Again, I noted the various climbing options. From this vantage, the views up and down valley were, quite simply, stunning. There were also nice camping sites not far from a creek, and plenty of side valleys worth exploring. The western flank of the Liebig Range is mostly glacier free, and easy to traverse in settled weather. However, we agreed it could be a difficult place to negotiate in poor visibility.

We retraced our steps back to Onslow Hut and the following day out to Mt Cook Village.