Access
From the end of Clements Mill Rd, off the Napier Taupo Rd (20min from Taupo)

Mid winter is a great time of year to go bush. There are less people around, you get to play in the snow and often the days are crisp and clear, if you strike the right weather.

A recent trip into the Kaimanawa’s provided that experience for us. The Hinemaia Track is a five hour tramp to Cascade Hut. Access to the start of the tramp is via Clements Mill Road, so named as a mill operated there until 1963. The road also gained infamy in 1996 with the discovery of the Kaimanawa Wall, an unexplained wall of rock that some say could be manmade and as old as 2000 years. Several theories arose as to its origins, but nothing concrete.

At first the track follows the river for more than an hour and the forest is beautiful. Moss covers the ground and giant beech trees give a very open feel to the bush. It resembles walking through a Lord of the Rings movie. Overall the track is easy to follow, although a good look around was needed after tackling a couple of windfalls.

After the relaxed start, the track ascends to a ridge and from there the gradient becomes more gradual, but still up! Beech remains the predominant forest type, with the odd large podocarp to add interest. The track tops out at around 1250m – not too high, but high enough for a decent amount of snow to have collected on the forest floor creating a most picturesque landscape.

From here it is a gentle descent, becoming steeper towards the end and dropping sharply down to follow the Tauranga Taupo River. The well-worn track is easy to follow, which we were thankful for, as we walked the last 45 minutes to the hut in the dark, a new experience for us both. By this stage we were on the flat, following the course of the river. Crossing the clearings was a bit more of a challenge in the dark, as we needed to scout around for the track markers.

Like a few tramps I’ve done recently, there is a knee deep stream to cross just before getting to the hut. The eight bunk hut is cute and comfortable, with a small coal burner which kept the chill off during the night. The hut book showed it was a popular spot in the summer, for both hunters and trampers.

The next morning was frosty and clear. And upon crossing the small stream again we had the amazing experience of having a pair of whio swoop closely past us several times, trying to herd us from their territory. It was fantastic to see a threatened species in its natural environment.

Seeing this part of the track in daylight was a treat, the clearings beside the river were pale in the frosts and the morning light in the river valley was beautiful.

The tramp back to Clements Mill Road was via the same route yet still very enjoyable, at a slightly less hectic pace with daylight on our side. 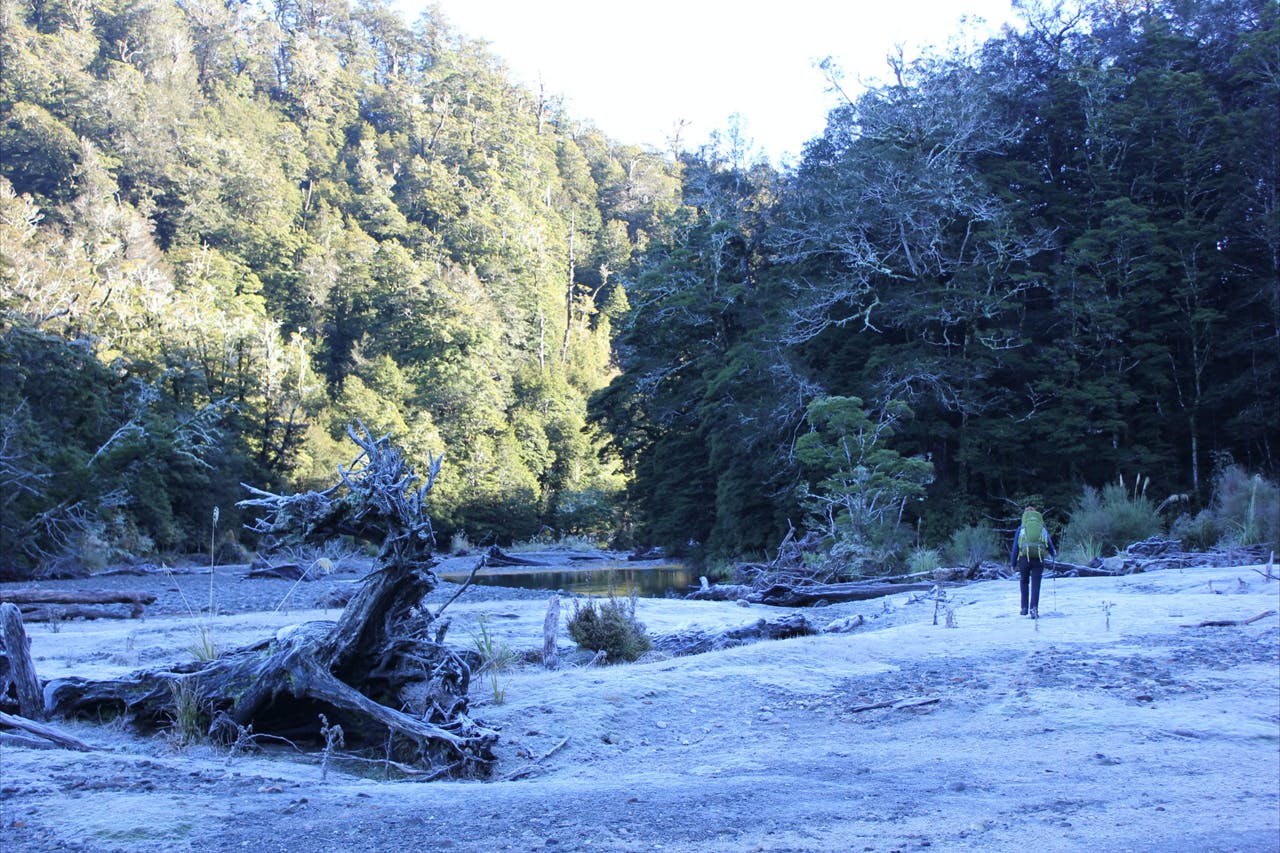 Snow at the high point of the route