Access
Waiotemarama Gorge Road, off SH12, or Mountain Road at the northern end, also off SH12

I was greeted by the rush of the river and a twittering of birdsong as I climbed out of the car at the trailhead to Frampton’s Hut on Waiotemarama Gorge Road. The morning’s drive under a blue sky dipping into foggy valleys was a pleasant start to a day in the bush.

Waterfalls punctuated the first section of the Hauturu Highpoint Track, in between muddy patches and just enough stairs to make life easier. Kauri trees lined the track in places and towered majestically above the canopy. I took a moment to lean in close to one of the trees and inhaled the aroma of kauri gum, a solidified dribble clinging to the bark. Fantails fluttered about, kereru whooshed through the woods and tui sang. 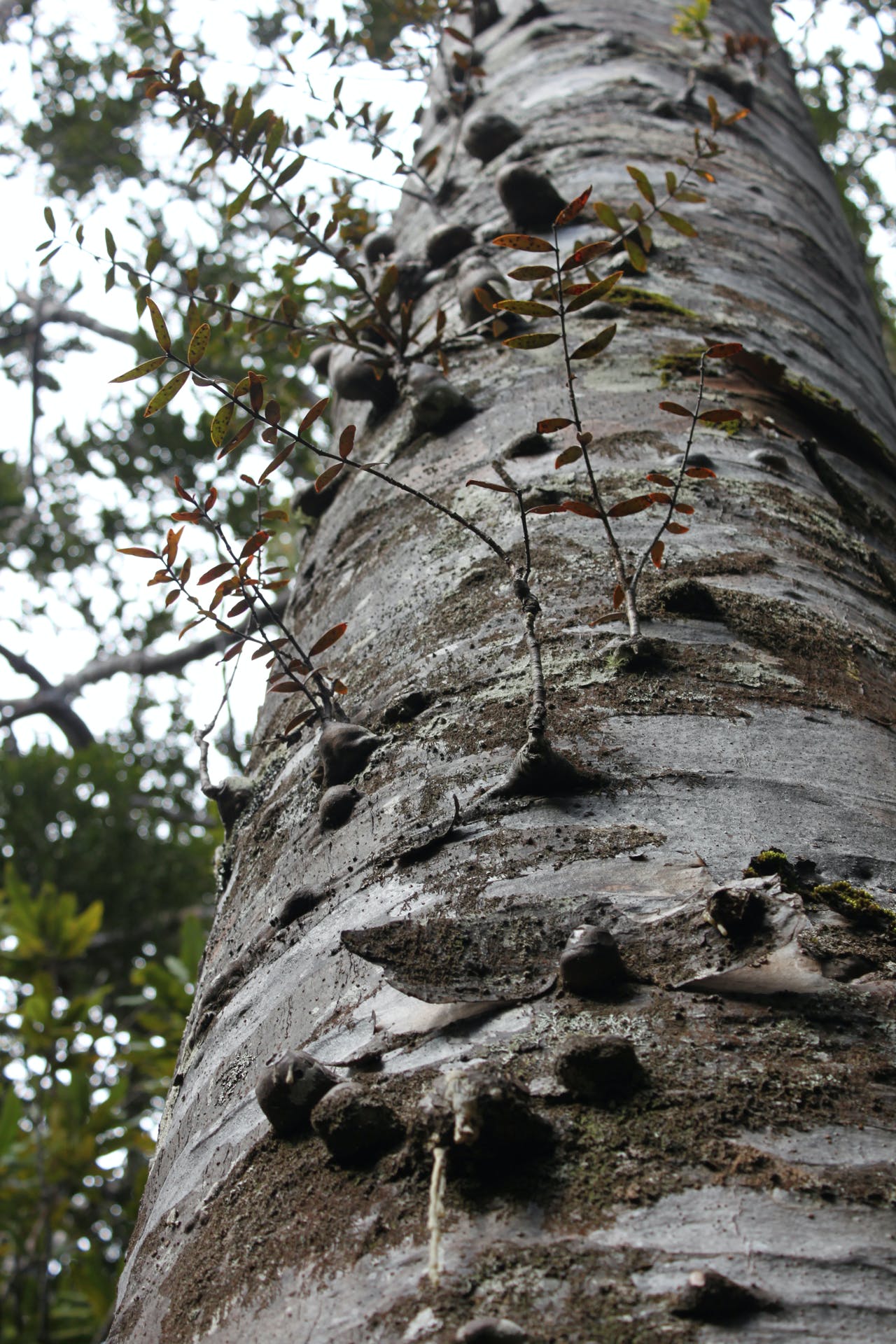 Looking up a kauri tree with some unusual nodules

It is a steep track that only gets steeper. Exposed sections of the ridge afforded stunning views south towards Waipoua Forest, though the wind was quickly cooling at every pause.

The trig point itself at 679m was somewhat disappointing as it was enclosed by trees but the views along the ridge make the trip well worthwhile. And although parts of the track were sheer in places, it was in good condition.

A steep descent after the high point gave way to a boggy walk after the intersection with the Waima Main Range Track, from which it was less than half an hour to Frampton’s. This is easily one of the best huts I’ve ever stayed in: it just had a welcoming look to it, a wood burning stove and benches beside a round wooden table. It was also well stocked with pots, pans, cutlery and crockery.

I hadn’t been there long when I saw two figures approaching. I welcomed the company and they were just as happy to find themselves in a cosy hut with a fire already crackling away. The Wagener stove may as well have been an open fire, as its window was missing.

Ilse, John and I sat down to dinner together, shared the chocolate round and I was pleasantly surprised to discover that they had carried in a bottle of red to brew up some mulled wine. We let it heat on the stove while we sat in front of the fire having a good old chat. There’s such a feeling of camaraderie with other trampers when you’re sitting in the flickering firelight, sharing stories, sharing your life. Somehow it’s so much easier to open up in these situations.

We finally decided it was respectably late enough to go to bed (9pm) and retired to our sleeping bags for the night. As I had arrived first I had managed to score the bed nearest the fire from where I could watch the glowing embers as I drifted off to sleep.

The following morning brought with it a blue sky and warm sun. Ilse and John headed back the way they had come and I headed out to Mountain Road via the Six Foot Track. The walk out, about 90 minutes, was a combination of mud, water features and fantastic views towards Hokianga Harbour. It was a pleasant traverse on an easy gradient with the sound of the river disappearing down into the valley below.