Access
Turn onto Meads Road from SH6 at The Neck and follow for 6km to the Kidds Bush Recreation Reserve campsite where the track starts.

Sawyer Burn Track looked steep and uninviting. Beech forest blocked the sinking afternoon sun, promising a chilly journey to Sawyer Burn Hut and we had started out later than we planned.

We arrived at the Kidds Bush Recreation Reserve at 2:30pm. A popular camping spot, Kidds Bush is located on the northern shores of Lake Hawea. We were tempted to bask in the afternoon sunlight and skim stones across the lake, but we had come to climb and to take in alpine views and were not to be defeated by our late start.

The climb to the top of the 2.5km Sawyer Burn Track takes about two hours and I promised my companions we’d turn around when we started losing sunlight. As we started up the track, docile cows blocked the path and to shoo them on I had to perform an abbreviated haka. We followed the winding track through mountain beech forest for some distance before coming upon the first views south over Lake Hawea.

The track was easier going than anticipated and for the first kilometre is wide and easily navigable. As we climbed, the view south became increasingly spacious and breathtaking, resulting in many photo-op stops. It was a clear, windless day and Lake Hawea, perfectly still like a piece of polished steel, reflected the blue sky and the mountains on either side. 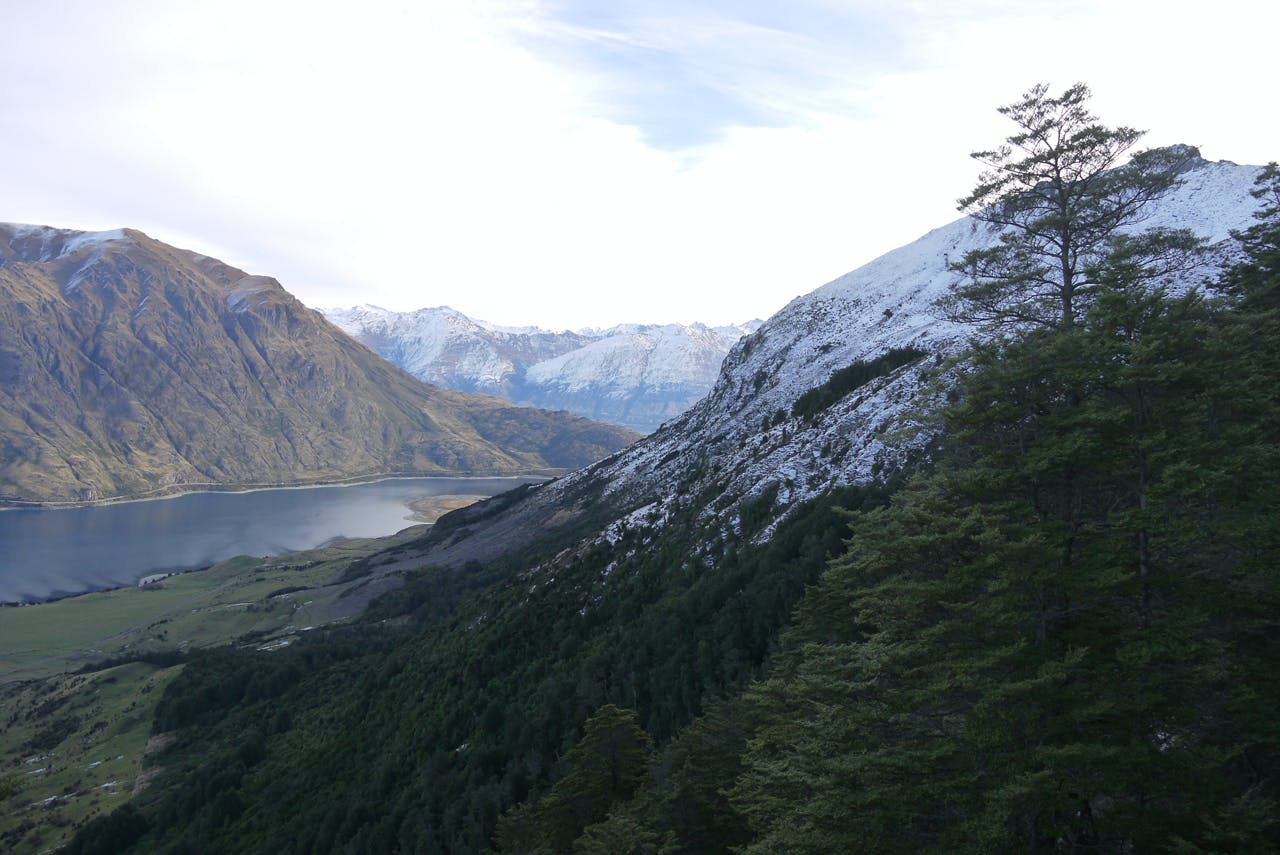 Soon we encountered the first smattering of snow which caused excitement and involuntary hand clapping. At one point, the track opened onto a snow-covered clearing and we all gaped at the view over to Isthmus Peak and the range down to Mt Burke and Wanaka. Our late start turned out to be a blessing; the sun, sinking in the north-west, casted a soft golden light on the surrounding mountains, illuminating every crease, crinkle and impression so it was like looking at the wrinkles on my hand.

With the sun going down, my companions suggested it might be time to turn around, but I insisted on going a little further, hoping to find the hut around the next corner. But it wasn’t, or around the next. We hadn’t brought any gear to enable us to stay overnight at the hut so as the sun fell below the horizon we reluctantly turned around.

We nearly flew back down the track, only stopping a couple of times to inspect the unusual snow crystal formations. When we’d made it back to Kidds Bush there was just enough light left from some championship stone skimming.

After one stone made 15 jumps we packed it in and drove back to Wanaka and finished the day with pizza.