How do you spend a week in this small park? With a pack, bike and canoe Kathy Ombler has no trouble finding secret gorges, isolated huts, cycle trails and tramping tracks

“The river became more and more beautiful. Each bend seemed lovelier than the last. Some places it was so narrow we could just see the sky. You couldn’t imagine anything as beautiful as the reflections, every leaf and fern perfect.” So wrote Whanganui riverboat traveller Winifred Rendell in 1914.

The same could be written of the river today. What has changed is that there are now so many more ways to explore this deeply-gorged and densely-forested river country than by lounging on a riverboat. Whanganui National Park encompasses 742km2 of riverside environs and tributary valleys throughout the Whanganui basin. Tracks, old roads and the river itself traverse the most remote spots. So grab your paddle, bike and boots and start planning.

First, a notable point. Yes, the essence of Whanganui National Park is the Whanganui River; however, the river itself is not part of the park. To the iwi here, Te Atihaunui a paparangi, the river is the ancestor. Embodied. Personified. Not an entity to be encapsulated into legislation.

Let’s, then, call it a symbiotic relationship. For 170km, the river flows through the national park, carving the soft, sedimentary papa rock to shape the steep gorges as described by Winifred Rendell. Beyond the river sprawls a jumble of lowland forests. For a land so rugged, there is much human history here, quite simply, because of the river.

Long before roads and railways, the river was the highway. Maori navigated the rapids and gorges and lived on the river banks. Then upheaval arrived. Missionaries, land wars and, from the late 1800s, Hatrick’s river steamers, which introduced tourism, farmer/settlers, forest clearance and, conversely, the first ‘preservation of scenic reserves’. Paper roads and actual roads were created in the most impossibly steep and slippery land, most of them soon abandoned.

In recent years, an increasing diversity of adventurers has converged on the park. Te Araroa Trail and the Mountains to Sea Cycle Trail now follow park tracks and roads, the ‘Whanganui Journey’ river trip is a perennial favourite and, for those who prefer to get far from the madding crowd, at least one good, old-fashioned, tramping track endures.

Bike the Bridge to Nowhere 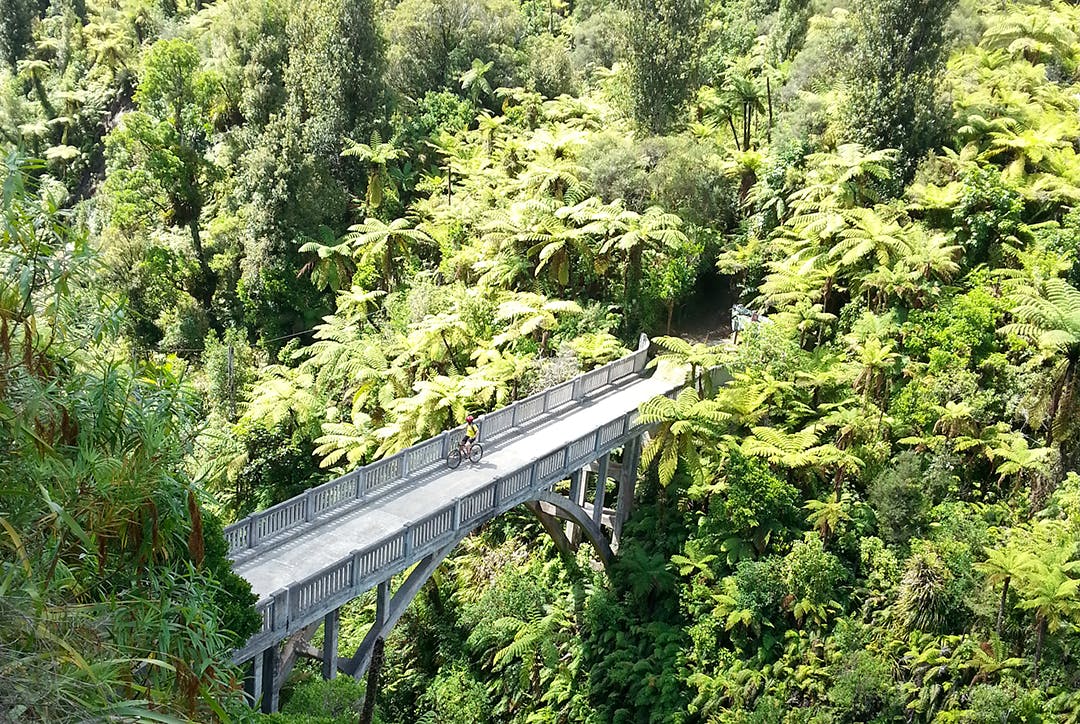 The Bridge to Nowhere is a classic 42km bike ride ending with a jet boat ride to the road end. Photo : Kathy Ombler

From heartache to heaven on a mountain bike; the Mangapurua has been a valley of transformations in the past 100 years.

Post Great War soldier-settlers tried to create farms in this densely-forested landscape. While their efforts failed, the road they built has become one of New Zealand’s most acclaimed mountain bike rides. Part of the Mountains to Sea Cycle Trail, many ride it as a single day trip starting at the Ruatiti roadend, out back of Raetihi. That’s a 42km ride (shuttle transport is available).

After a grunty 10km climb, it’s all pure flow through regenerating forest, past old homestead sites and across the famed ‘Bridge to Nowhere’ (built for settler access) to the Whanganui River. The final touch is the incredibly scenic jet boat ride to the nearest road end. Yes, the boat also carries your bike.

Tips: Go between spring and autumn, when the track is dry. And walk around the steep papa bluffs.

Catch (sight of) a blue duck

Kaiwhakauka Track, a dual cycle/walking track in the north of the park, is a likely place to spot whio (blue duck).

This area happily sits in the crossfire of two major conservation programmes, the Kia Whārite Biodiversity Project, a DOC/Horizons Regional Council collaboration that targets 180,000ha of national park and private land, and the significant volunteer efforts of Blue Duck Station, a farming and tourism venture at Whakahoro.

Tip: A good blue duck spot is by the waterfall, about 4km up the track. This is just before the park boundary, on Blue Duck Station.

Tramping how it used to be 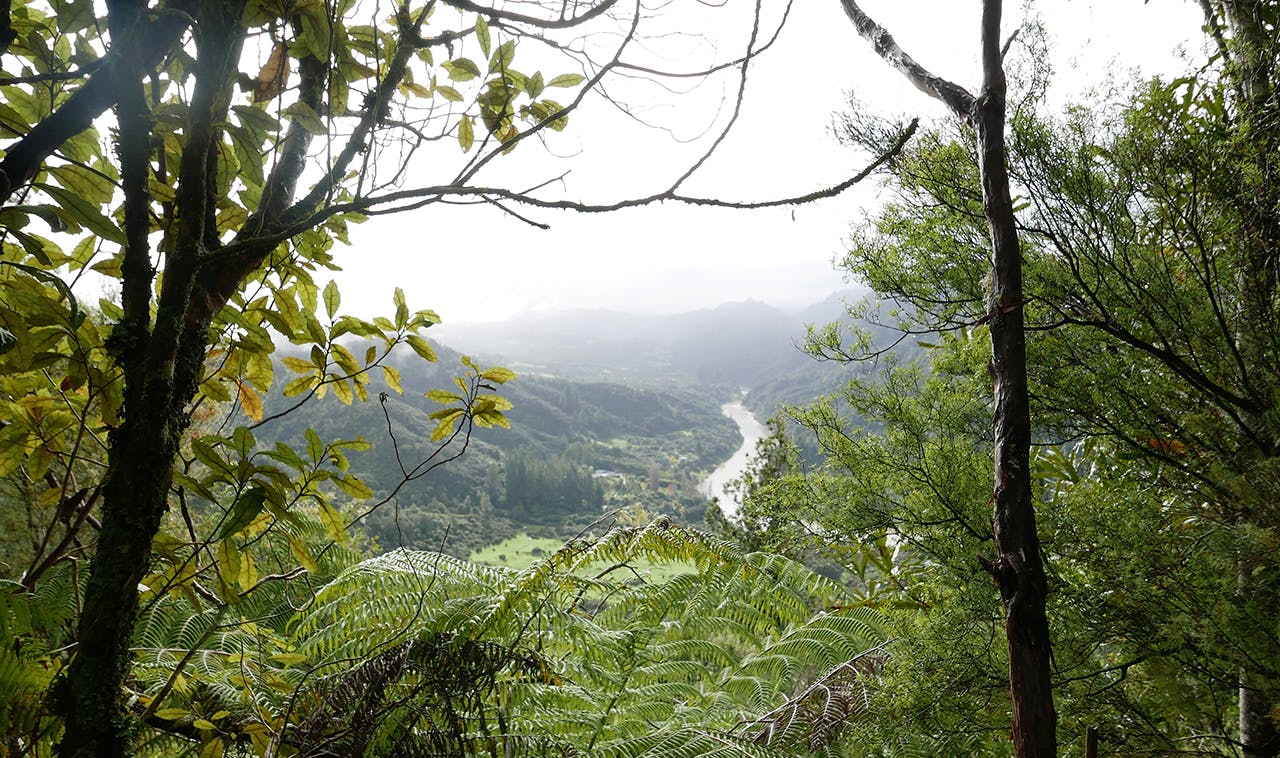 View of the Whanganui River from the Matemateaonga Track. Photo: Kathy Ombler

The Matemateaonga Track (known locally as the Muddy Muddy Onga), is no Great Walk-style benched and gravelled path, despite the route once being touted for a main highway from Taranaki.

The 42km ridgeline trail traverses the heart of the national park; views extend across dense podocarp/broadleaf forest all the way to the Tongariro mountains. There are four excellent huts en route, which you’re likely have to yourself because so few venture here.

Tip: the ridge top huts are cool spots for watching an electric storm.

Walk around the oxbow

Tackle this near circular, 16km day walk, as designed by nature.

Atene Skyline Track follows a forested ridge around an old oxbow of the Whanganui River. The start and finish points are 2km apart, on the Whanganui River Road at Atene (36km from Whanganui). There’s a shelter and water at the halfway point, and good views through the trees.

If you don’t fancy the staunch climb up and around the ridgeline, try the two hour (return) Atene Viewpoint Walk, at the northern end of the Skyline Track. Your reward here is the view of the old river bed.

Your hut on a hill 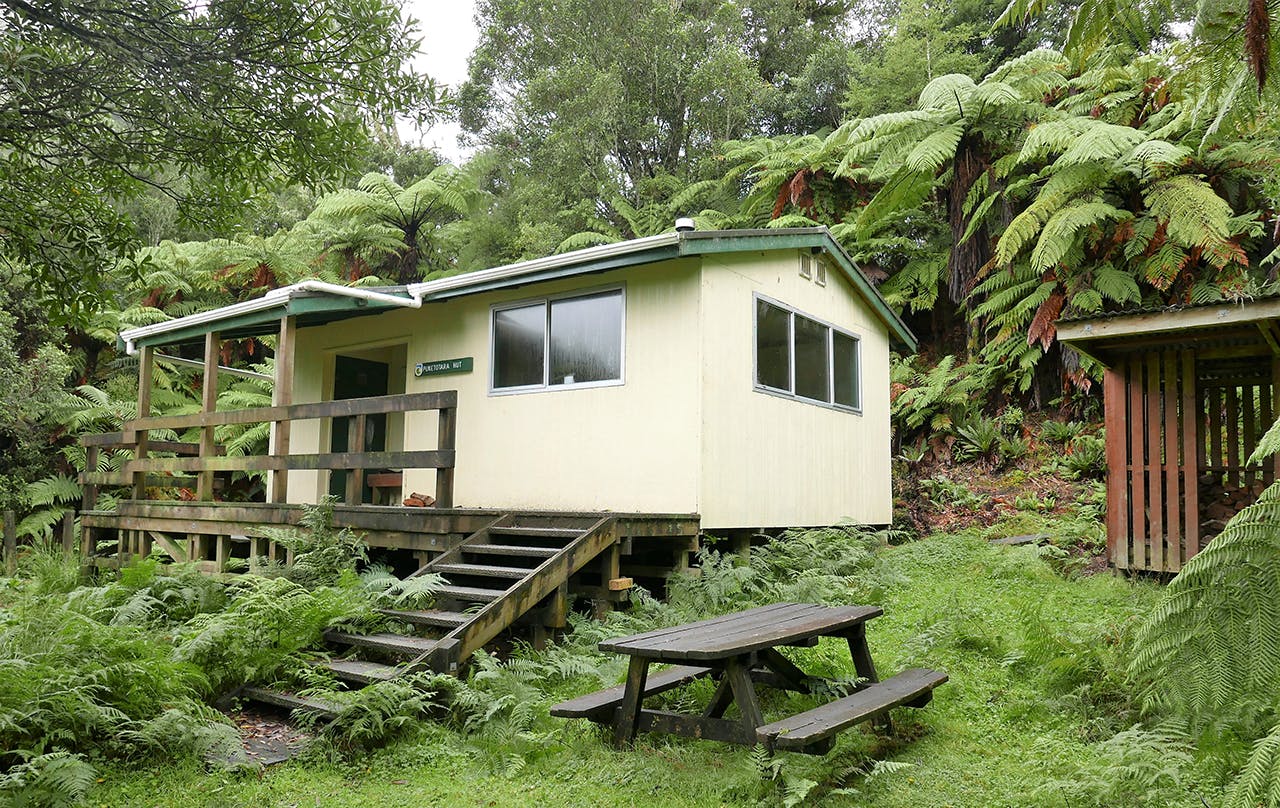 Just an hour from the busy river is Puketotara Hut. Photo: Kathy Ombler

Puketotara Hut is little more than an hour from the river and its hundreds of summer-paddling travellers, yet chances are you’ll be the only folk up here. There will be birds; friendly robin and night-calling kiwi.

The hut sits at the eastern end of the Matemateaonga Track, in a wee ridgetop clearing surrounded by tree ferns, tawa, rewarewa and rata, most of them dripping with epiphytes, orchids and mosses. You could take a ‘bush break’ up here from your river journey, or simply catch a jet boat from Pipiriki (20km down river) for a cosy, overnight stay.

The track is steep and slippery (DOC promises there’ll be some steps in place come summer) but if you stop often you can watch the views unfold – to Mt Ruapehu on a clear day.

The Whanganui Journey, the three to five day canoe trip, is one of New Zealand’s ‘Great Walks’. No, this doesn’t mean walking on water, it’s simply testament to the outstanding experience.

While the river itself is not in the park, the forest-dripping scenery you’ll see most certainly is. You can paddle independently (in summer you’ll need to book huts and campsites) or be guided by a DOC-licensed commercial company.

History from your handlebars

Winding its way beside the lower river, in and out of the national park, the Whanganui River Road has long served the local villages, marae and farms. It’s now part of the Mountains to Sea Cycle Trail, and you’re as likely to meet a German cyclist as a local cocky.

The road is narrow, winding, prone to slippage, and thankfully now sealed. You can ride it in a day (Pipiriki to Whanganui is 87km) but don’t rush. Meet the locals. Call at the Jerusalem convent/museum and church, Kawana Flour Mill, Matahiwi Gallery and Café (in the old schoolhouse), Koriniti Marae (ask first) and Atene Viewpoint Walk. OK, maybe stop overnight, at the convent, a village campsite, a farm stay, or take a flying fox ride across the river to the eponymous cottage accommodation near Koriniti.

Rest in the ranger’s hut 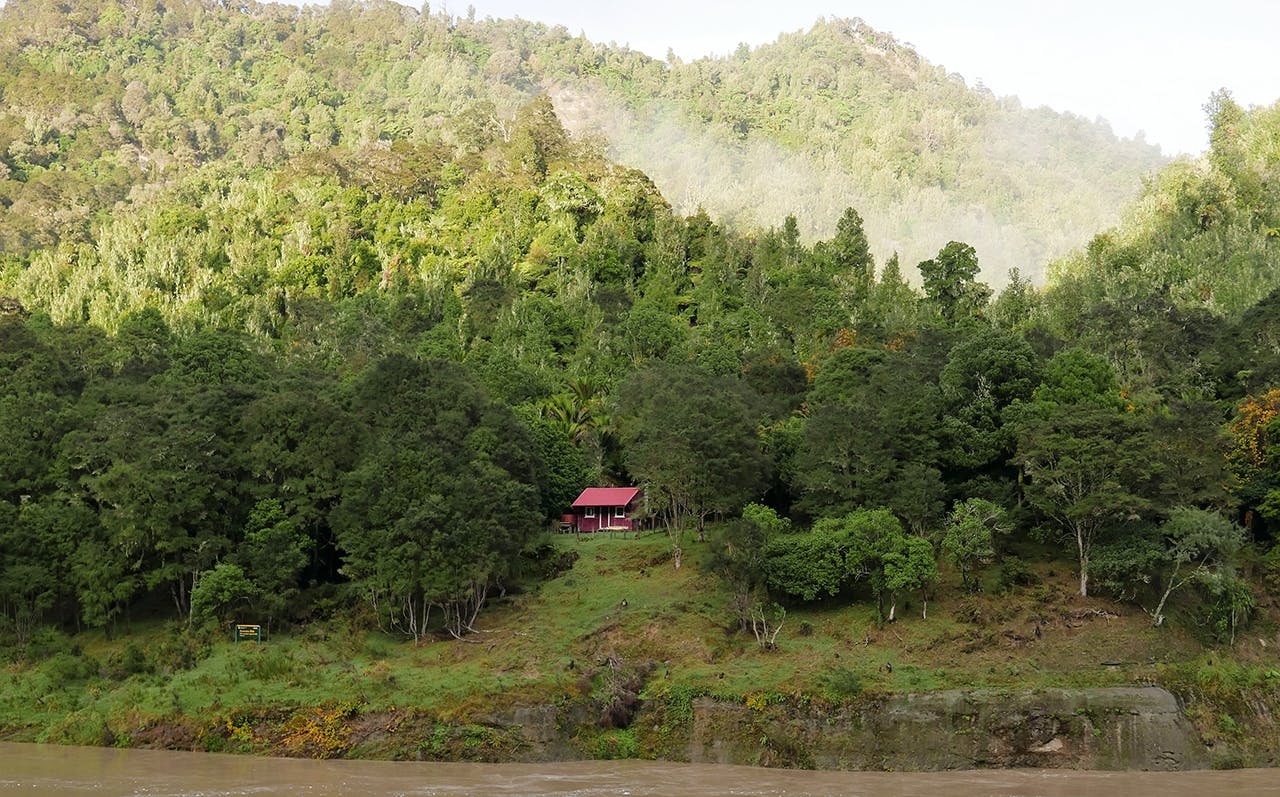 Just across from Atene is Downes Hut – accessed by jet boat or canoe. Photo: Kathy Ombler

When grand river steamers plied the Whanganui, Tommy Downes was the government ‘supervisor and ranger for river works and domain lands’. He was also a prolific author, writing tomes on local Maori and river history. His old riverside base, Downes Hut, has been well tidied and is now a national park hut. It sits on a forest-backed terrace across the river from Atene.

If you’re not canoeing, local jet boat operators will ferry you across. Crank up the fire and enjoy the birdsong.

You don’t need to paddle for days to see the best of the Whanganui. One of the stand-out features is the middle gorge – an 88km reach inaccessible by road.

Papa cliffs, clad with clinging ferns and vines, rise sheer from the water. With jet boat help (toting you and your canoe), it’s possible to paddle in the gorge on a day trip, for a few hours, even.